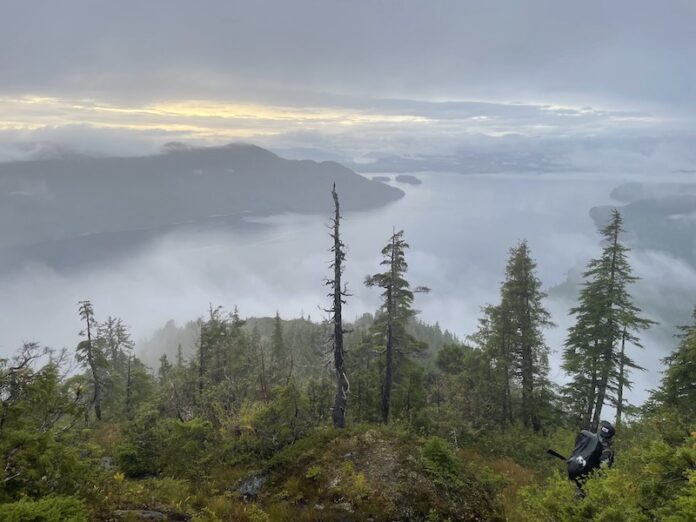 So you want to go on an Alaska Sitka deer hunt. If you’re coming up from the Lower 48, you likely have little information about specific locations, let alone images on game cameras, so e-scouting good locations can seem daunting. The mountains in Southeast Alaska are more extreme, further apart, and glassing up a buck across the canyon, running down the hill and up the next one is rare, if not impossible. This is probably immediately evident as you started to e-scout and thought, “If I am supposed to find deer in the alpine, how do I get up there?”

A good hiking pace up a mountain with no established trail is a mile an hour. If you are hiking from sea level and alpine starts at between 2000-2300 feet, that’s a long haul. Don’t look for the shortest route, scrutinize the topography and find a way to meander if necessary to avoid getting cliffed out or frustrated by an inaccessible drainage. Look for logging roads that climb to within striking distance, but expect to park your rig and fight a road choked with alders.

Once you’ve found a mountain with doable access, look at how much mountain there is. Try not to limit yourself to a thin ridge of alpine that drops off into timber after a few hundred yards. Bucks are probably there, but it is harder to glass and though more mountain doesn’t necessarily mean more deer, it does provide you with more area to glass and more potential. I have seen up to twenty bucks of varying sizes in a morning glassing session.

Though that mountain show above required a truck, skiff, and 4-wheeler, that doesn’t mean there aren’t good mountains relatively close to town. Of course, know that ease of access means much more pressure. If you do decide on a mountain that has easy access by logging road, you might need to plan to hike up and over the ridge to hunt the opposite face or walk down the ridge away from the easy spots. Hunt the entire way, of course, but be prepared to go further to where the deer get pushed by traffic.

One of the best things about hunting the alpine is that it is so lush, that deer won’t migrate off until they have to, so there really is no reason you won’t find bucks in good, isolated alpine every day from scouting trips in June until mid-September.

If possible, look for mountain networks that provide high muskegs or fresh clear cuts as alternative options. Bucks will not come to calls like they do during the rut, but at least high muskegs provide good views and the edges of muskegs grow excellent meals.

Clear cuts that are a few years old are also prime sources of food for deer. Alpine is way more fun and the preferred way to hunt, but if the weather never breaks, hitting that clearcut you ignored on your way up the logging road might become a solid plan B.

Weather windows don’t just mean it’s time to head back to the truck. In many cases, there is no truck. Being weathered in can mean that your floatplane can’t pick you up, or that the ocean isn’t safe to navigate in your rental boat. It’s not a bad idea to scout a weather option in case the big beautiful mountain is forecast to be half hidden or be prepared with a strategy to make a plan for the weather.

In 2018 a buddy and I planned our ascent up a mountain to coincide with a break in the weather. It would break around noon, so we’d hike through the rain, the weather would break, we’d shoot a deer, and be done with it. We hiked in the rain, got soaked, ditched our camping gear (that was protected by dry bags) so we wouldn’t be setting up in the rain, spotted a deer, and almost went purple with cold as we waited for the bedded deer to rise and the fog to relent long enough to get a quality shot.

The rain stopped and the clouds and fog thinned enough to reveal a second buck closer to the ridge. So as my buddy waited, I decided to get the blood flowing and tuck back behind the ridge and work my way to the other side of the bowl toward the other deer. I told him I’d wait until after he shot. My buck stood up from behind some brush just after he fired. I took my shot. The sun came out, and we packed the deer back to our camping gear, then off the mountain. I have had just as many hunts ruined by the forecast being wrong. So there is luck involved too.

In some cases, it isn’t possible to change your hunt thanks to the weather, but choosing an area that has multiple options could be the key.

In 2021, the weather never broke during the opener and I came off the mountain empty-handed. The weather worsened, so after drying out back at home, I made an assault on a network of low-level clear cuts. Though the rain and wind continued, there were a few breaks in which I could see distant mountains. I knew I hadn’t made a mistake coming down though, because the visibility was quickly swallowed back up. I walked up a logging road, glassing a few spots that were a few years from becoming too thick to hunt effectively. I sat for over an hour, making sure that I had glassed well and wasn’t missing anything. A deer is substantially more hidden in a clear cut than in the alpine and the texture of a clear cut provides safety even while a deer is out feeding.

I happened to catch a 4×2 buck walking behind a small tree that escaped the logging. It disappeared into a crease. I made a brutal walk through the terrain toward where I thought it would be, stood on a stump, and found the deer bedded. Tag 1 notched at an elevation of 800 feet.

Getting up the mountain

You’ve picked your spot, you’ve arrived and it’s tougher than you expected. Welcome to hunting in Southeast Alaska. You have to know that the terrain will be thicker, nastier, and more discombobulating than you expected. Don’t count on enough sun to give you help with direction. The same goes for seeing through the trees to other mountains for a frame of reference. Since it is so wet and you’ll use plenty of battery trying to get that little blue arrow to point you up the mountain, it pays to have more than one tracking device. All-in-one is great, but if you lose one, you lose all. onX is a great way to keep tabs on your progress and direction. goHUNT has a nice app too and is improving its features. But be sure you carry an inReach or SPOT locater.

Though you’ll more than likely have plenty of water available, you’ll lose way more than you can drink if you’re hiking in the rain. Your rain gear will trap in heat and you will sweat profusely even though the temperature is in the low 60s. You can either cover ground quickly and know you’ll need plenty of water once you get to the alpine, or you can slow down, enjoy it, and not overstress yourself on the first day.

Plan your steep routes carefully so you don’t put yourself in a position where the only thing to grab onto is Devil’s Club. The spines break off under the skin and are painful. Gloves can be a good idea, especially when you’re glassing in the rain. When it’s raining and 56 degrees, it’s very easy to get cold. Being wet drastically increases the likelihood of hypothermia, even in August.

Once the snow melts throughout the spring and summer, slopes not comprised of rock come alive with vibrant green vegetation. My wife and all of my buddies from the south remark that the lush alpine is one of the most surprising parts of getting into the mountains of Southeast Alaska. It’s not scree, and it’s not exclusively monolithic faces. It’s not terrain that changes during the summer. Once it’s green, it’s green until mid to late September, so the deer are there. Glass hard along the edges of timber. In the morning deer will be out feeding and will often bed along the edge of the timber or at the base of steep cliffs or rock faces, not necessarily at the end of the alpine. If it’s hot, look for snow patches. There was a lot of snow this winter (2021-2022) so there will be plenty of snowy places for deer to seek refuge if things are hot in August.

Glass and be patient. Deer will appear from texture, from the tree line, and from over the ridge. Again, unlike down south where you might be naming deer or elk you see on a game camera, you can glass up a few small deer on the first morning and evening, think that’s all that lives on this mountain, then see an absolute crusher buck the next morning. Glass and be patient.

As my buddy, Jesse says, “let your glass do the walking.” He’s obviously not the only one who says it, but he’s the first one I heard say it, so I cite him.

If you don’t see deer when you arrive, don’t worry. The same goes for if you do glass one up, or happen upon one as you are hiking. During my hunts in Wyoming, I always felt that I was running out of time. As though I had just a few seconds until the heavily pressured Lower 48 animal would bust. It wasn’t true there, and it certainly isn’t true in Alaska.

You don’t have forever, but you don’t have to panic. I’ve bumped deer over the ridge, but upon reaching the ridge, found they had simply returned to feeding. Spooked blacktails take off just like any other animal, but sometimes they are inconvenienced more than spooked, so stay in the game and try a gentle pursuit to make sure it truly is headed out of the country. Season and regulation info available at ADFG website.

Also enjoy this article on hunting the Alaska deer rut.

Pack a Raft to Expand Your Options