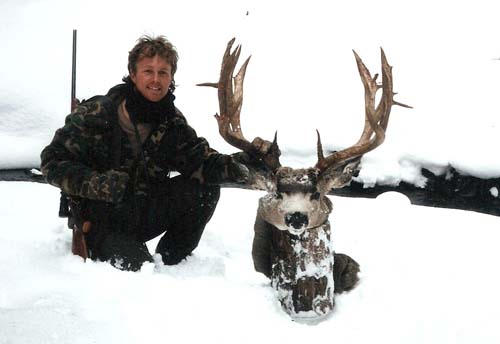 We all know big mule deer are a tough prospect. Some even argue they are the toughest trophy to take in North America. I’ll let the philosophers do their debating, but I will offer that putting a big mule deer on the ground is very difficult, but still achievable, by anyone who sets his mind to it.

Early in my mule deer hunting career, I learned that by studying those who had gone before me, I could apply their habits to become more successful, and it worked. In this article, I look back at the 200”+ bucks I’ve taken and share with you exactly what I did to make this happen. You’ll find some common threads in each hunt that you can apply in your own quest to take the best buck of your life. You’ll also discover that big bucks don’t just come from great units requiring years to draw. In fact, unless you’re wealthy (I’m not), your biggest buck probably won’t come from a tough-to-draw unit.

Back in the late 1980’s, when I first got serious about killing big deer, everyone classified really big deer as those that made the Boone & Crockett Club’s all-time list. This meant a buck’s net typical score had to be 195” or more while a non-typical had to net at least 240” (now lowered to 190” and 230” net). While these are great benchmarks, most would agree that a lot of really big bucks don’t meet that criteria, but are still trophies of a lifetime.

These days, a more accepted and reasonable standard for a DIY hunter is the 200” gross score.To me, this is a good and simple definition for a great buck. It’s a truer measurement of how much bone the buck grew without regards to symmetry, excessive inside spread, or cheater point deductions. Kudos to the chief of all scoring systems, B&C, but in the field, it is difficult to accurately judge a buck against that system. Judging a buck against a simple number like 200” is much easier. Unless you’ve got a governor’s tag in your pocket, virtually no one passes up bucks of this size on purpose.

Besides simplicity, I also like the 200” gross benchmark as it is a reasonable minimum that a DIY guy can expect to break in his or her lifetime. Sadly, the B&C all-time net minimums are almost unachievable these days. I base this on my 20+ year career of intensely focusing on scouting and hunting mule deer. During those years, I estimate I put in over 1000 days afield in some of the best deer country in Idaho, Colorado, Wyoming, Nevada, Montana, and Utah. In that time, I’ve seen two bucks that would make the current net typical minimum and zero (yes zero) that would make the net non-typical minimum. I wish I could give you better news, but I can’t. I’d rather just tell you the truth so you can reasonably know what to expect. Take heart, though, I’ve taken many great bucks during that 20 year period, and so can you.

Keep in mind, I don’t scout draw units that I have no reasonable chance to hunt. I realize that if I did, I could find bucks of that caliber, but I can’t justify wasting valuable scouting/hunting time looking at bucks I can never hunt.

If you’re a hunter wanting to take a 200”+ gross deer, you would be wise to study the habits of others who’ve broke that ceiling. It will help you focus your energy where the potential for payoff is the greatest. Following are summaries of the 200” + bucks I’ve killed:

Weather: Heavy snow and temperatures in the single digits

This buck is still my biggest to date and the biggest I’ve ever seen on the hoof. When I found him in 1995, he was a good buck, probably grossing 200” or so (I didn’t hunt him that year because I found a better buck in another SE Idaho unit that I never killed.) By August of the next year, he had put on over 30” of bone and was just incredible, especially for SE Idaho.

I hunted him for eight days during the archery season, but never saw him. Amazingly, I found another 230” gross buck in a different unit with easier access between that archery hunt and the opening of the rifle. I put eight days of the rifle hunt into that buck, but another hunter killed him who happened to be hunting the area for the first time.

I took one day off, then packed up the horses and headed to the high country in hopes of still finding the first buck. Elk season was open by then, and hunters were everywhere. I hunted six days in the worst kind of weather and found the buck on the last day I could hunt, killing him at 250 yards in heavy cover. I was above him so I could see him.

Summary: I knew where this buck lived. I spent considerable time in the unit years before I found him. I spent over eight days in the area during archery, learning his core area. I had great hunting weather, and focused on the thick cover in the area. I was miles from the nearest road.

Prescouted: Buck was not prescouted, but I had hunted the unit two times prior, and had been scouting it on and off for seven years.

Hunt Type: With a partner, horse and foot travel 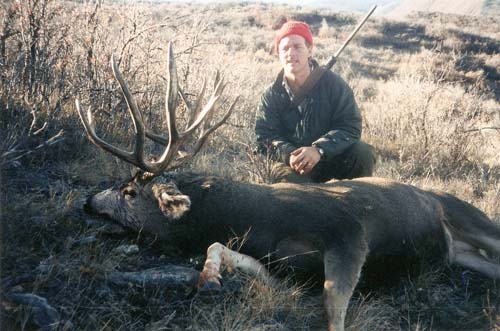 This buck came from a small area of public land, maybe 250 acres, bordering private property and containing heavy oakbrush and juniper cover. I had seen at least two other big deer in this area on past years, so I knew it had great potential. It was a tough place to hunt because of private property issues.

My partner at the time, Kevin Kenney, glimpsed the buck courting a doe in heavy cover below me and radioed to me to stay alert. Within minutes, I spotted the buck in a tiny oakbrush opening and took the shot. I made a poor shot, hitting him in the end of the nose, but luckily he didn’t get away.

Summary: The bucks in this area are migratory, showing up in late October, so locating a buck before the season isn’t really an option. However, I spent considerable time over seven years making at least five trips to the unit learning the country before I killed him. It paid off as I could focus my limited hunting days in the best places and ignored the thousands of acres I knew didn’t have as much potential. I focused on the heavy cover. This was not a premiere unit, so I could draw it every 1-2 years allowing me to take advantage of what I had learned; something that isn’t an option in the great draw units a guy gets to hunt once.

Prescouted: I found the buck in early August while flying the area. I ground scouted the buck for several days prior to the archery hunt, too. 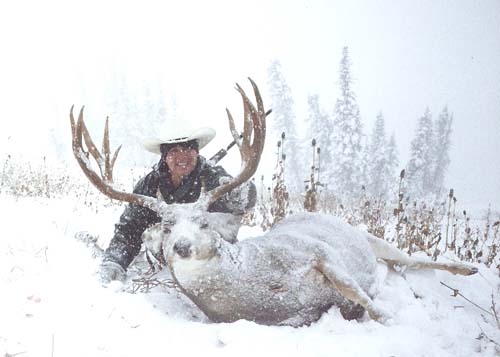 This is my second highest scoring buck. After prescouting him, I spent the opener of the archery season in the area. I found him immediately, along with a great 30” typical buck that would gross in the mid 180’s. By the second day, I had him and four other bucks bedded at 40 yards but spooked them without getting a shot. I determined he had a huge track, too.  That would later help me kill him.

I returned for the opener of rifle, and found him again, almost getting a shot off at 450 yards, but he made the timber before I could get steady. I hunted five days without finding him. I returned the last few days of rifle season just as a big snow storm hit. All the hunting pressure was now gone. I hunted two days before cutting his tracks in some timber lower on the mountain. After a quarter-mile tracking job on extremely steep slopes, I got a bullet in him at 80 yards.

Summary: I knew where this buck lived. I spent considerable time in the unit years before I found him. I spent over eight days in the area scouting and archery hunting, learning his core area. I had great hunting weather, and focused on the thick cover in the area. I was miles from the nearest road.

Prescouted: Buck was not prescouted, but I had hunted the unit six times prior, and had been scouting it on and off for 17 years. 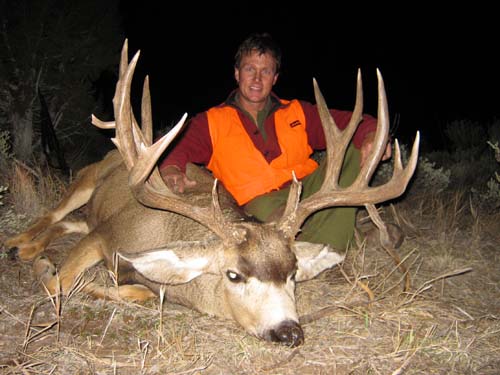 Summary: Another Western Colorado buck from an area I know like the mole on my shoulder. I had been purchasing cheap landowner tags over the years in Colorado allowing my preference points to build. Although it took 10 points to draw this unit, the unit is not worth 10 points, nor is any if you want my opinion.   If I did not have considerable knowledge of the unit prior to drawing it, I would have never taken a buck of this class. If you are chasing the high point units in Colorado, you better start scouting them now or you will most likely be disappointed. I killed this buck on private land I gained access to through my scouting trips. No money changed hands for this access.

I killed the buck right at dark as he emerged from the thick cover. He was alone at the time, but exhibited rutting behavior.

Summary statistics on all bucks mentioned:

Locations: One from Idaho, one from Wyoming, two from Colorado

Weather: From blizzard conditions to clear skies with highs in the 50’s