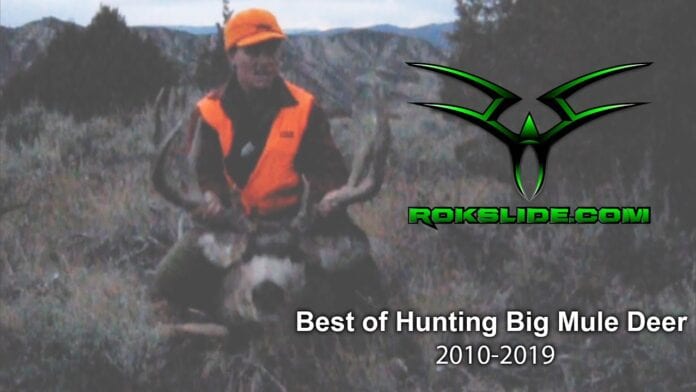 …there was something missing: me punching a tag!

Well, actually Travis killed a 9-year old buck–lab aged–and I missed a good buck in that last film, but it still felt like something was missing.

Now this might sound like a lame excuse, but when it comes to hunting big mule deer DIY, a guy can expect to eat a lot of tags.  It’s just how it is.  And  just so you know, it’s how it’s always been for me. I estimate that I’ve eaten about 70% of my tags over the years.

So while I enjoyed making those films, and I think I passed on a lot of big buck knowledge, it didn’t sit well with me that no tags were punched.

While it’s true that “it’s called hunting for a reason”, punching a tag after much effort spent is one of the most rewarding pursuits in life–at least to me!

So I dug through my video archives and I found gold for you Rok Blog followers. I spent a few months putting it all together and even hired a professional editor (Jordan Budd of Running Water Media) to put the final touches on my latest film:

I’m pretty happy with the final product.  It’s over 40 minutes of back stories and highlights from every successful hunt of that decade. Long time Rok Blog followers will recognize some of those scenes, but never before have they all been together in one film.

If you want to be a better buck hunter, connect with other successful buck hunters any way you can. I think this latest film will do just that for you.

Read more about hunting big bucks in my book. Signed copies are available in the Rokslide store, or you can go Amazon for faster delivery.