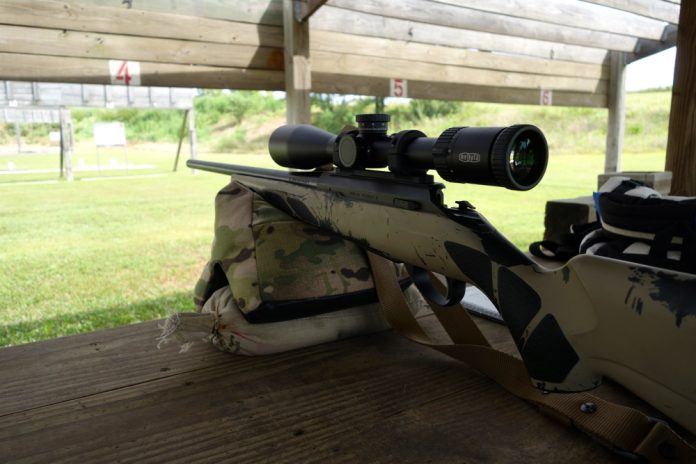 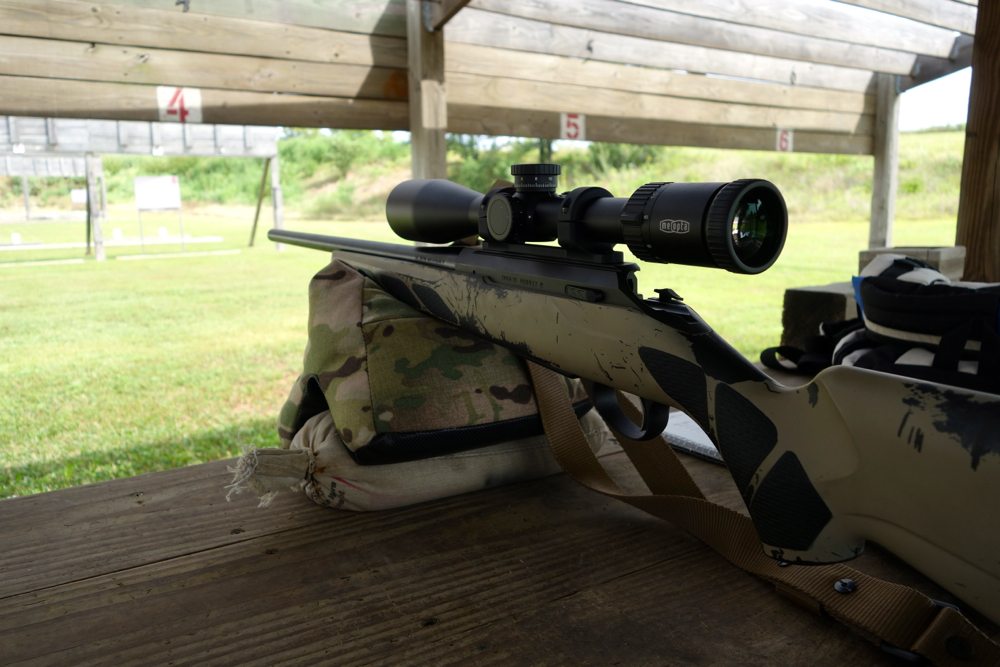 In part one of the Tikka Compact review, I covered the rifle and its preparation for use. The Compact rifle did come in under the weight of the T3 Lite that I have in 30-06 by about a ¼ pound, which met the intended purpose of a lighter rifle for mountain hunting. Now, we will see if it performs as well on the range.

The components for the following loads will vary only by powder and bullet.
Lapua brass and Federal 210 primers were used throughout. Powder, particularly the popular varieties, has been difficult to come by at times. So in these loadings I used what was available to me and what was on hand at the time. All groups were four shots from the bench across a F1 Chrony chronograph at 100 yards. 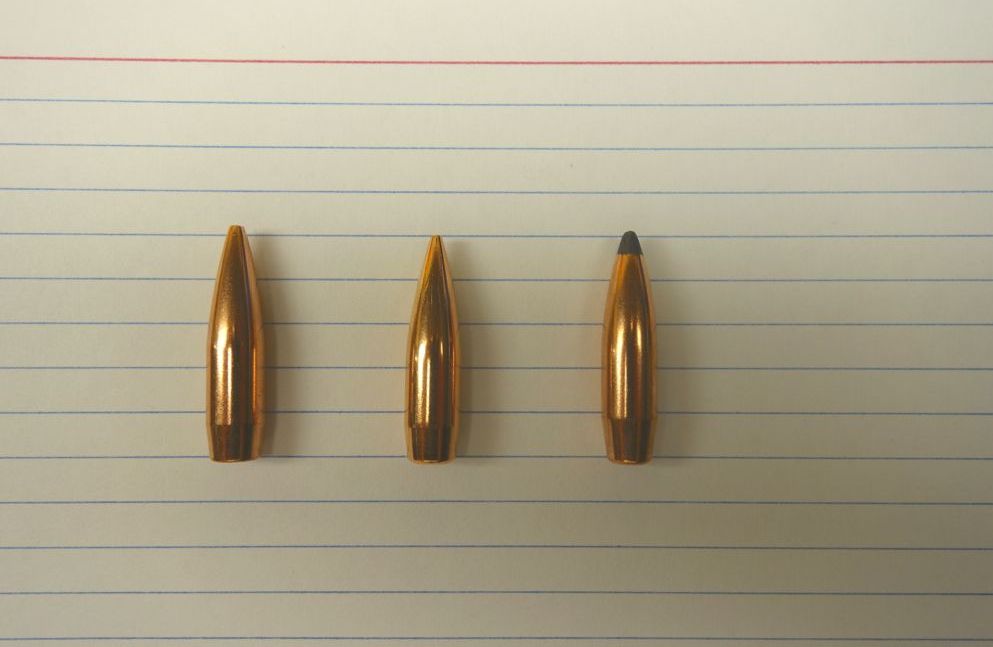 The Scenar bullets came with high praise and expectations. It has been touted as easy to load and devastating on game. Lapua markets the Scenar as a target bullet, although there are many accounts and pictures of game taken with this bullet. Not sure where I fall on the target vs. hunting bullet issue, but the Scenar deserved a look.

I found lots of load data and ‘pet load’ information that recommended Varget as the powder of choice. Without any on hand and none at the local shop, I went for the IMR 4895 that was on the shelf. Seated to magazine length, using Lapua brass and a Federal 210 primer, I can see the potential. 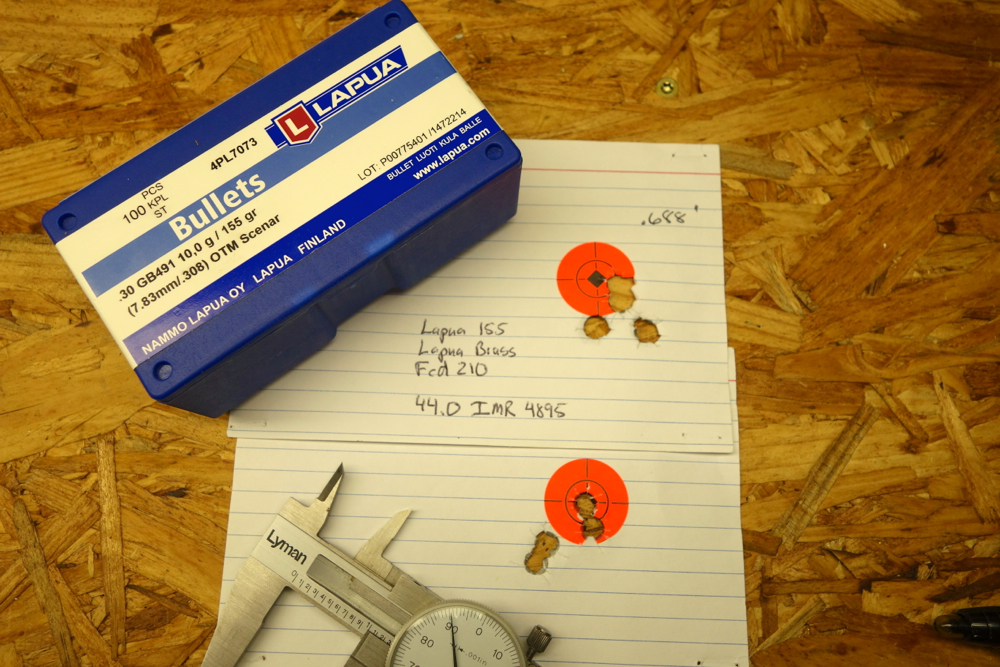 As advertised the Scenar was not at all finicky. With a final load of 44.0 grains of IMR 4895 group size was around 0.7 to 0.8 inches with a velocity of 2690 from the Tikka. I ordered some more Scenars and plan on using this combination for target and rifle competitions. 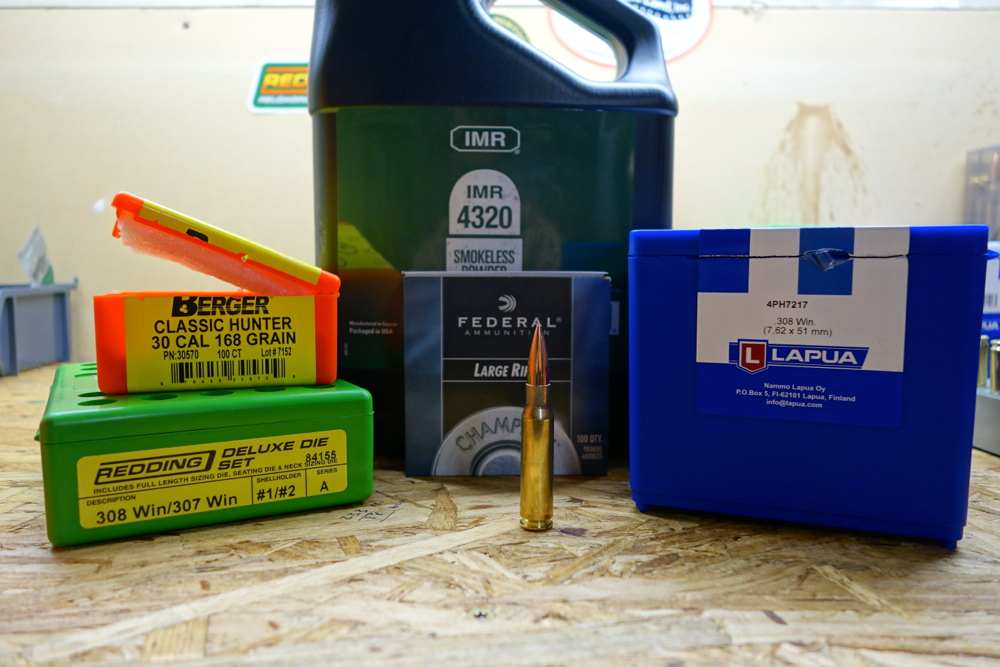 Berger’s website conveys the following about the Classic Hunter line:

“For the first time in Berger’s history, we have purposefully designed a line of hunting bullets that conform to the restrictive dimensional standards set by SAAMI. These bullets were designed for hunters that shoot factory rifles and load at magazine lengths.”

The Tikka is a magazine-fed rifle that can put restrictions on cartridge OAL without a modification to the bolt-stop and a new magazine. Not wanting to do this mod, but take advantage of the high BC that Berger offers, I opted for the Classic Hunter line.

Again, Varget was referenced for some most loads I found from other users. A look at the burn rate chart found IMR 4320 in the same range and more importantly, readily available. Referencing the Berger manual I found the starting point and worked up from there. Once I settled on a powder charge, I did experiment with seating depth. True to their word, the Berger Classic did not show any drastic changes in accuracy based on seating depth. In fact, my first OAL just below mag length was the best. 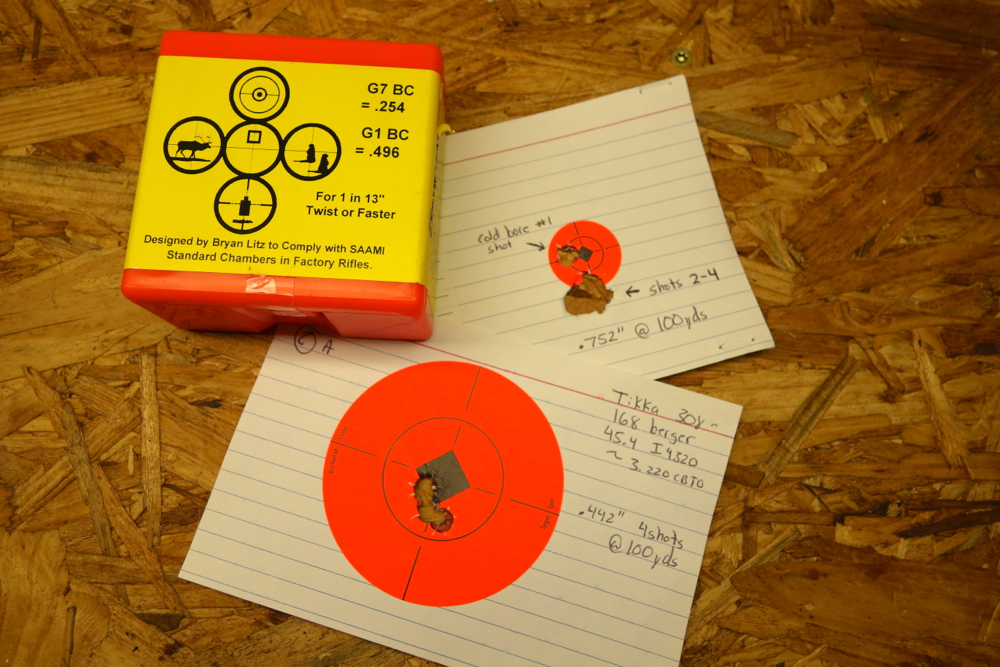 The final load with the Berger was 45.4 grains of 4320 for a velocity average of 2660. Not too shabby for a rifle with a 20″ barrel. Accuracy is sub-MOA with a best group size of about 0.4 inches. I cannot wait to try this combination on game.

The 180gr Gameking is the bullet of choice in my 30-06. I was curious to see how the .308 could handle the heavy bullet. A little research pointed to Alliant’s Reloader 17 as a stand out in the .308 with the heavier bullets.

With some Reloader 17 on hand, I decided to see what I could get out of the Sierras. Starting at 45.0 grains, I worked up from there watching the chronograph and for any signs of pressure. 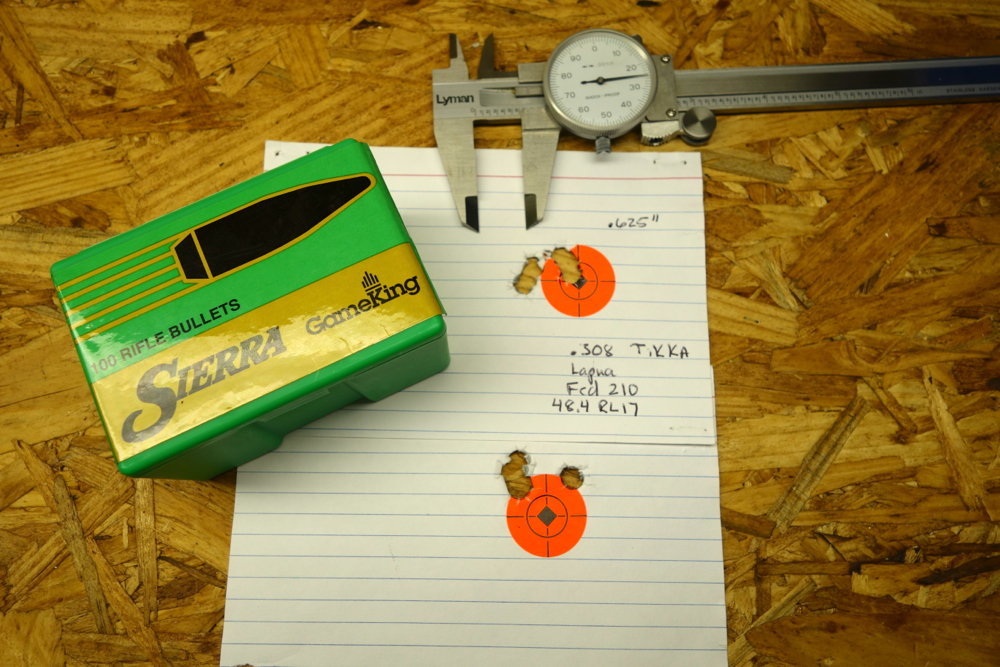 The stand out was 48.4 grains with an average velocity of 2620 . Group size measured 0.6 inches. I have always had good luck with Sierra bullets, they just continue to work.

With a wide range of bullets available over the 30 caliber range, the .308 can be a versatile rifle from the mountains to the plains. The above loads are examples of that versatility. Having used the Tikka Compact for a while now, not only for load development but in a tactical-hunter rifle competition, I can say that this rifle does indeed fit the bill as a capable hunting rig that comes in ligh yet delivers the Tikka sub-MOA accuracy out of the box.

I am looking forward to the opportunity the coming hunting seasons will bring. I have a Montana Bear tag in hand and was blessed this year with a tag for Western Kansas Mule deer. Whatever may happen, this rifle will be part of the story.

To discuss this article or ask the author questions, click here