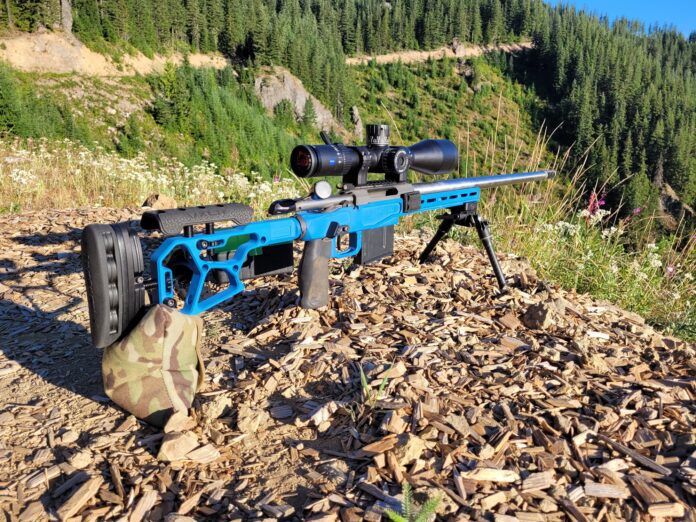 Let’s face it. Choosing a riflescope that meets your needs as a shooter and hunter and functions as expected can be a real challenge. In fact, it’s one of the things I get asked about the most. Different types of hunting and shooting require different types of scopes. Someone hunting thick timber needs a different scope compared to someone hunting the open country in the West. In this review, I’ll be looking at a scope designed for hunting and shooting from medium to long range. The Zeiss LRP S3 is the latest long-range riflescope offering from Zeiss. It’s advertised as a perfect solution for the hunter who wants to be prepared for just about anything. 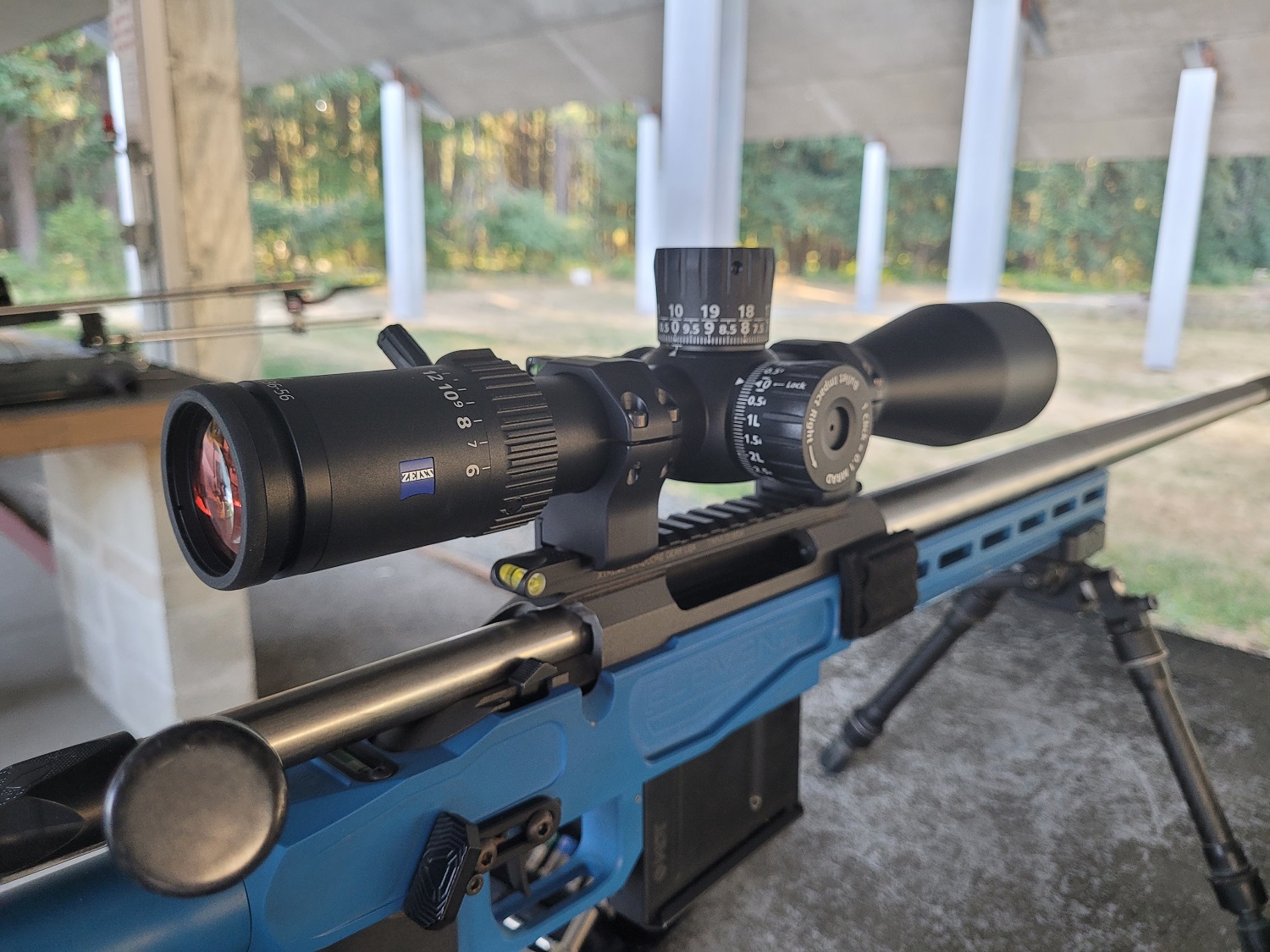 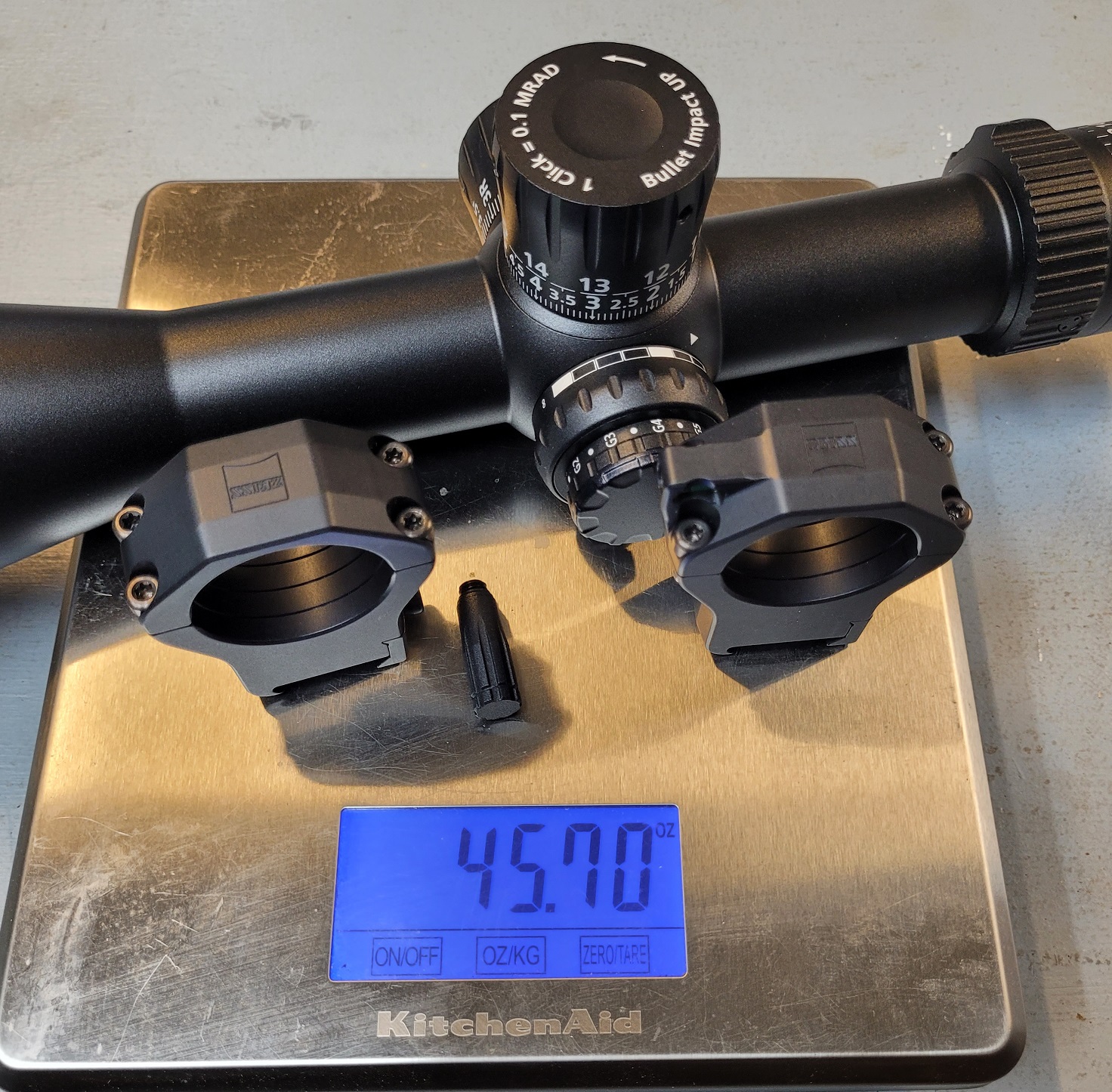 I prefer a level not integrated into the ring cap, but mounting was easy, and I had everything set in short order. 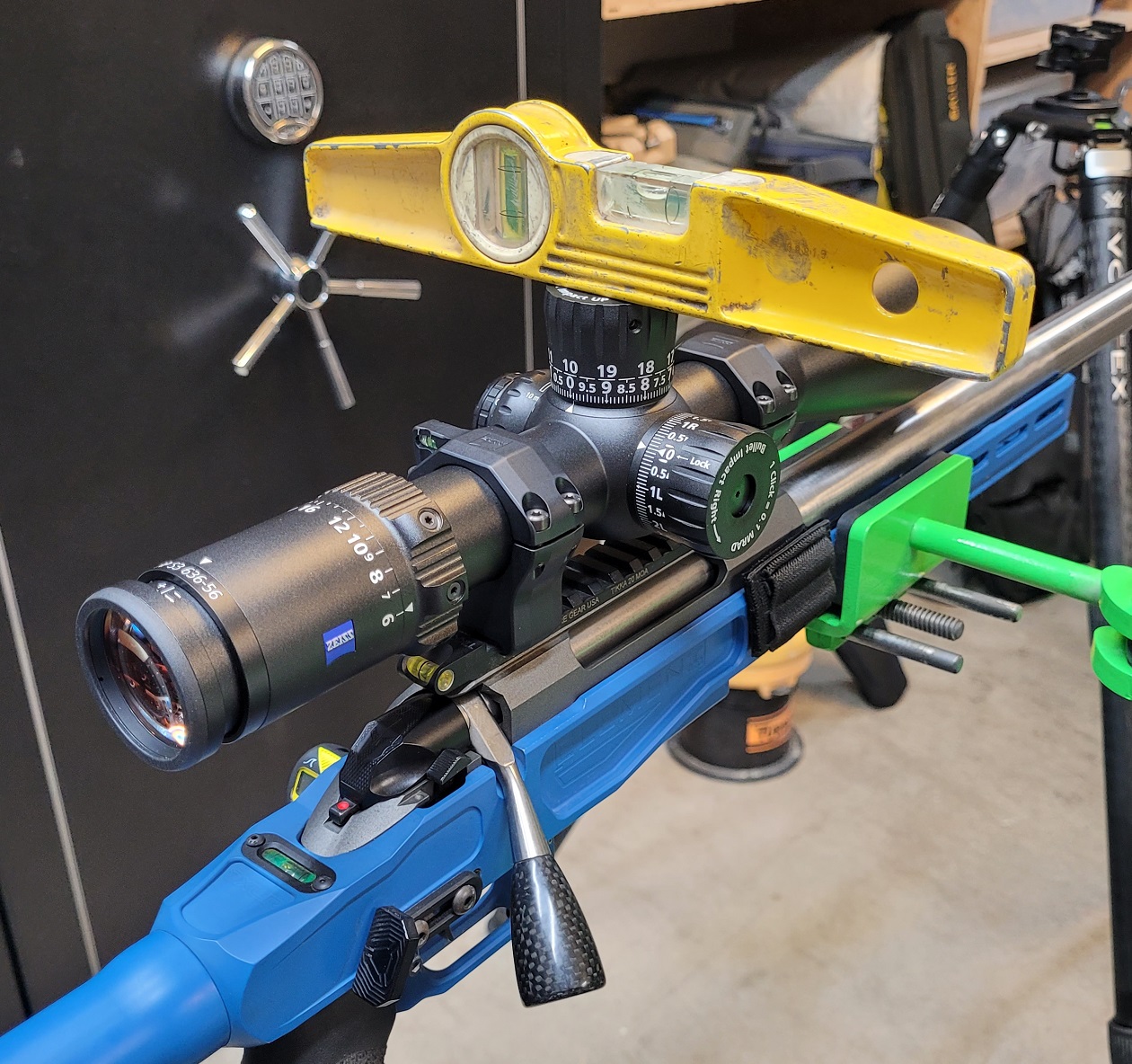 The 636-56 is 6x-36x with a 56mm objective lens. It’s an FFP riflescope and is available with MOA or MIL reticles. Both reticle options feature red and green illumination. The elevation turret has a zero stop, and the windage turret locks and is also revolution limited. The vertical adjustment range is 32 MRAD/110 MOA. If you want even more elevation, check out the 425-50 model that boasts 46.5 MRAD/160 MOA of elevation travel—it may be the ultimate scope for long-range 22 caliber matches?

As mentioned above, Zeiss LRP S3 is a Front Focal Plane riflescope. The reticle options are ZF-MRi (MRAD), or ZF-MOAi (MOA). Zeiss’ ZF-MRi is a tree style reticle with .2 MIL hash marks and .5 mil dots that make it easy to make quick wind holds. The center area features a floating center dot for precise aiming in difficult shooting conditions. The scope I tested was the ZF-MRi model, and I found the reticle usable from 6x to 36x with and without illumination. Low-light conditions or broken terrain will benefit from illumination, obviously.

Illumination is controlled by a dial on the parallax knob. There are five different illumination levels for red and green, with an “off” in between each level. This is my favorite type of illumination control since it’s so fast and straightforward to use.

The turrets on the S3 have a solid, and tactile feel as you dial elevation or windage adjustments. The exposed elevation turret has an easy-to-set zero-stop system. Windage is locked and must be pulled out to adjust, which keeps you from having an accidental windage error due to the turret getting bumped. It’s also limited to 5 MILs from the zero position, so you are always within one-half rotation from zero at any time – allowing you always to know you are on the correct revolution for windage. The turrets are well thought out and my favorite system of any I’ve used. Smaller turrets would be welcome for hunting, IMO, but the size is good for competition uses. 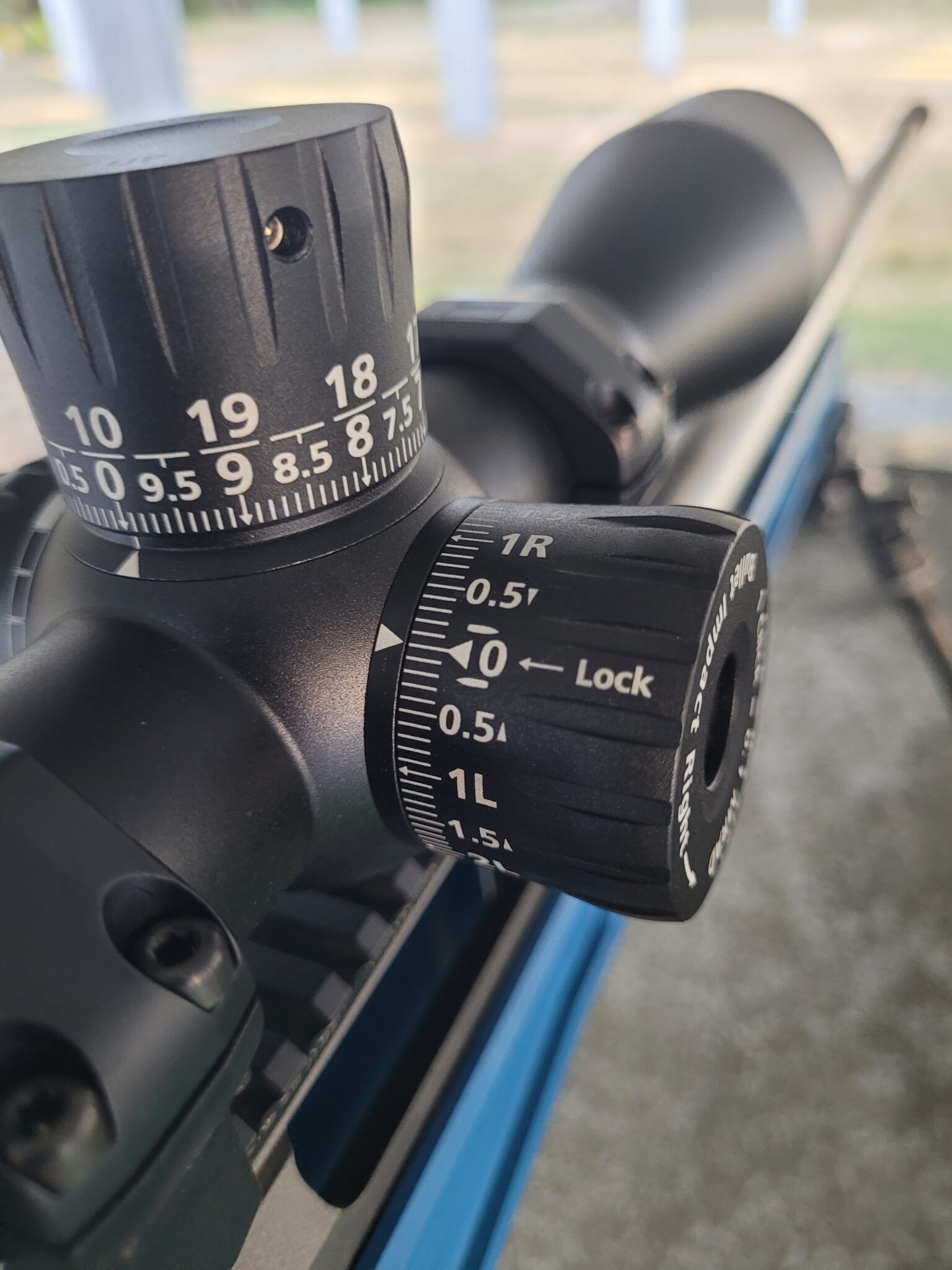 Once I had the LRP S3 mounted and zeroed, I did a tall target test by placing two dots on the target that measured 7.5 MILs apart with the reticle. I fired a total of six shots while aiming at the lower dot. The first shot was at zero, and the second shot was dialed 7.5 MILs. I continued dialing up and down until I had three shots at each dot. 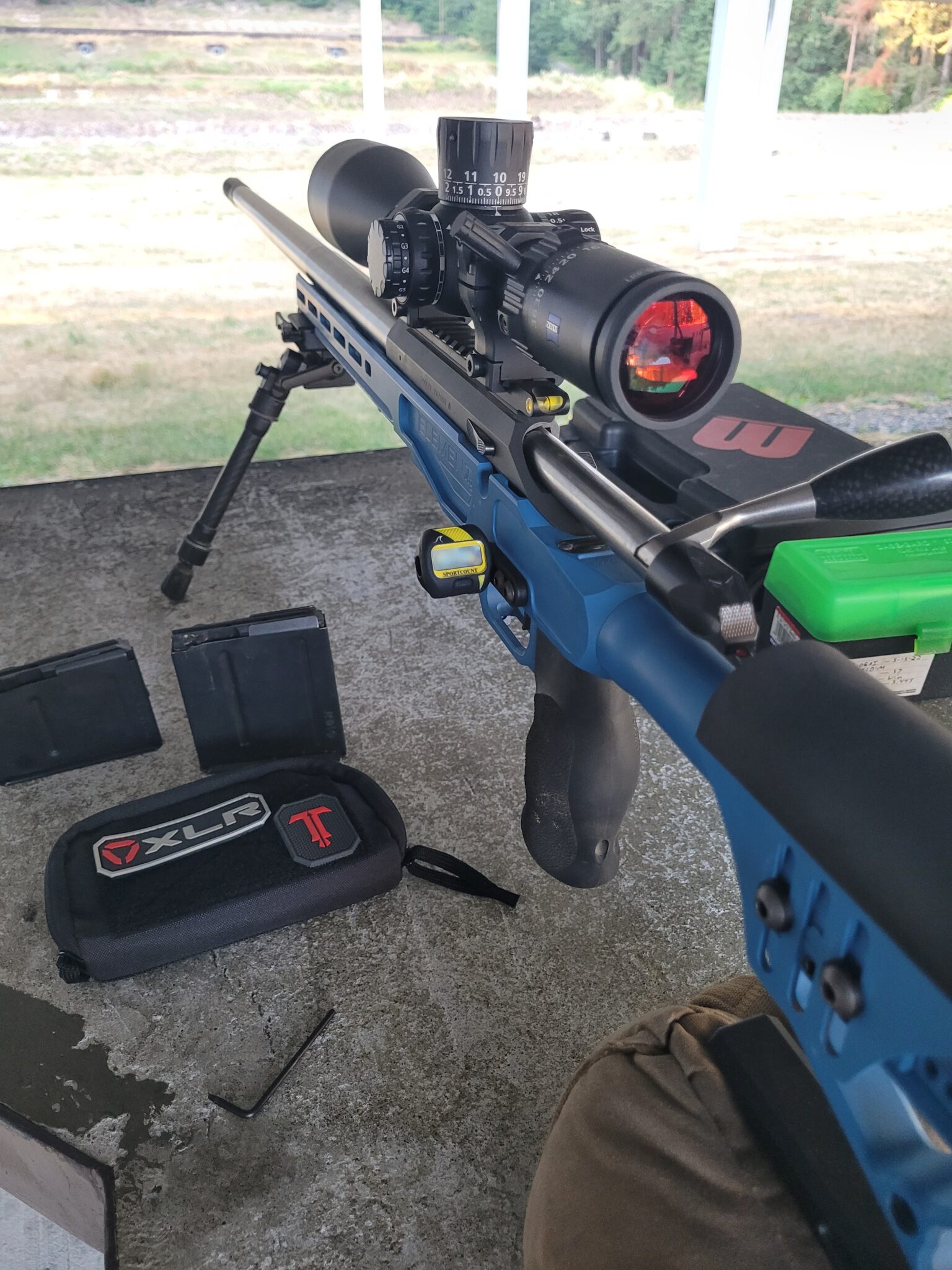 The Zeiss LRP S3 dialed accurately and returned to zero each time, so I headed for the mountains to shoot longer distances. 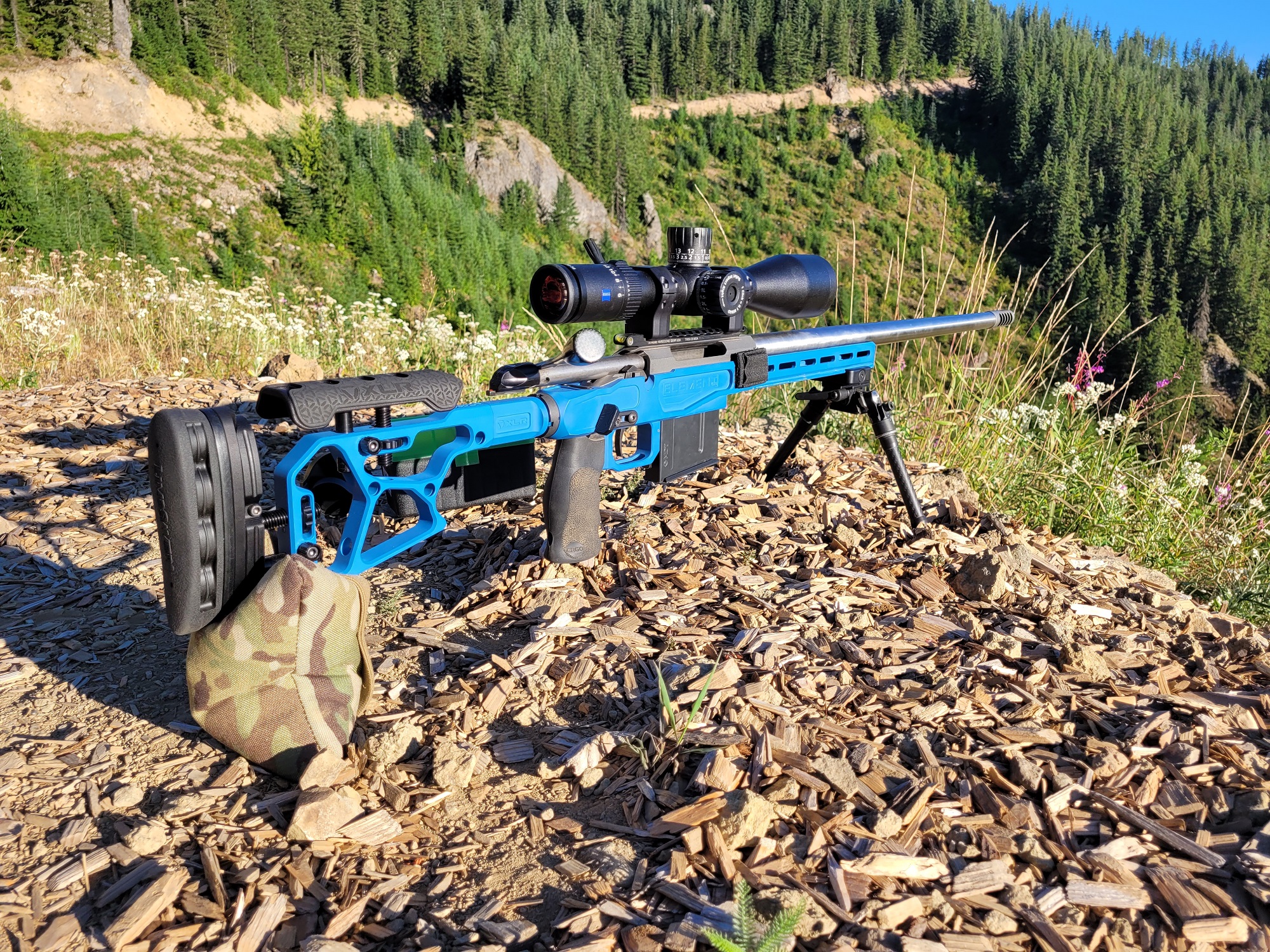 I was able to shoot from 650 yards out to just over 1000 yards in the mountains, and the LRP S3 dialed accurately at all the ranges I tested.

To test zero retention, I did a series of drops onto a shooting mat like the method described here. Note that the rifle is not bedded into the chassis as described in the link.

This rifle and ammo combo shoots consistently 1.25 moa or better for 10 shots. For my drop test, I fired two rounds to confirm my zero was good. I then dropped the 15-pound rifle and scope from 18″ onto a shooting mat on each side of the scope and fired a shot after every drop. I saw no point of impact shift through the three drops.

I then moved on to the 36″ drops and repeated the process. On the first drop (on the parallax side of scope) the point of impact was high, and right just slightly outside of normal. I continued the drops and shooting through the rest of the test. All four shots fired after that first 36″ drop was within half moa of each other and made a tight little group in that high/right location. After the test, I adjusted two-tenths left, and one-tenth down to get my zero back to center.

As I mentioned above, this rifle is not bedded to the chassis, so this only tells me there was a shift. It doesn’t tell me if it was the rifle or the scope. Either way, the shift was slight, and I felt confident to continue testing on some hunts.

My first hunt of the year was for antelope in Wyoming. I chose to use my 15-pound 6.5-06 AI competition rifle since walking distances would be pretty short. I hauled the rifle to Wyoming in a soft case on the back seat of my truck. At camp, I verified zero (no shift since the drop test) and was ready for the hunt. 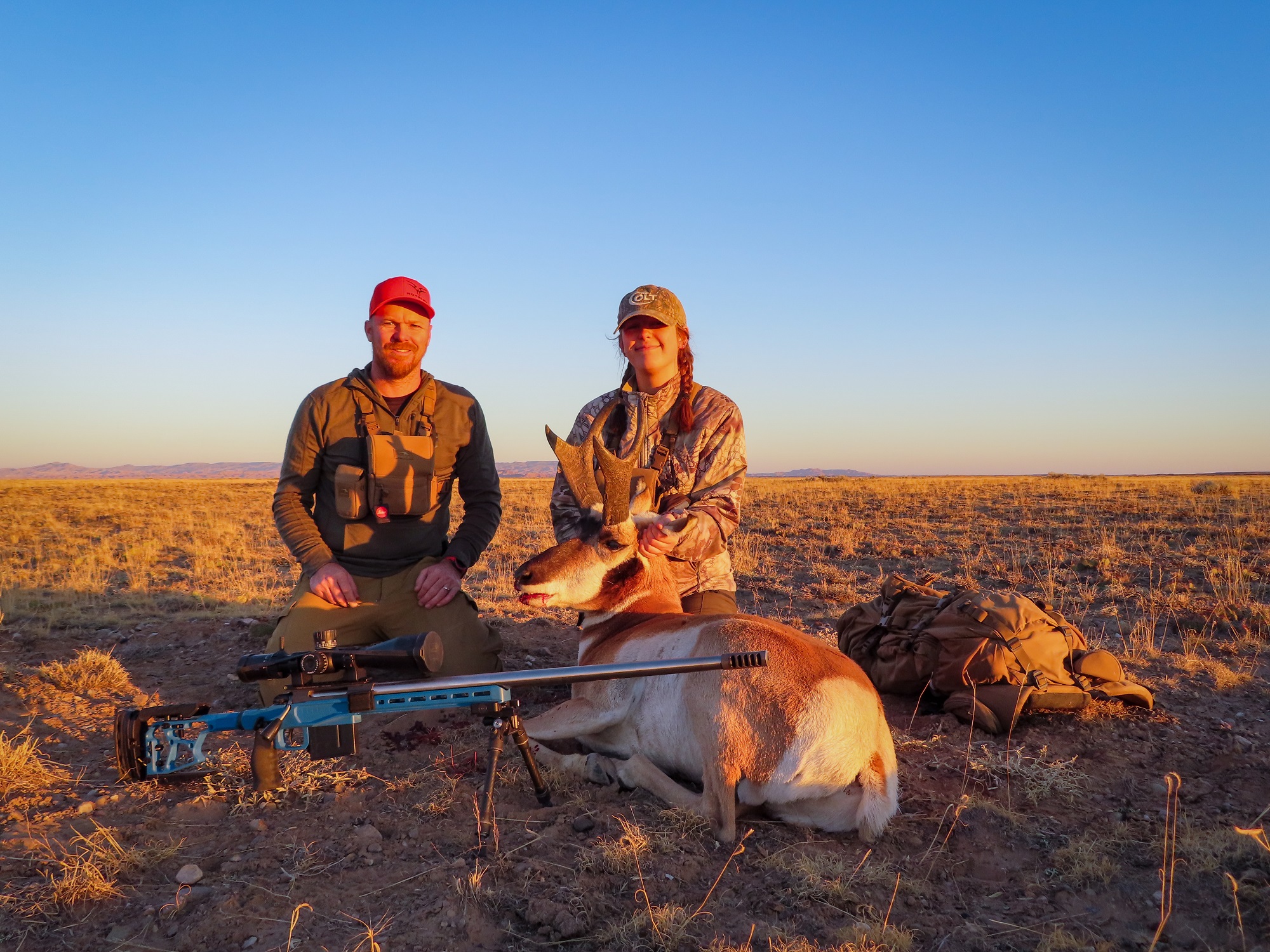 Opening morning, I had my target buck broadside at 334 yards. He kept chasing a smaller buck around, so when he stopped, I quickly ranged, dialed, pressed the trigger, and missed! Just as I was pressing the trigger, the buck whirled and took off, chasing another buck. He trotted back to his does and stopped slightly quartered away. This time at 371 yards. I quickly ranged, adjusted, and fired again. My shot hit just behind his shoulder, and he dropped in his tracks. 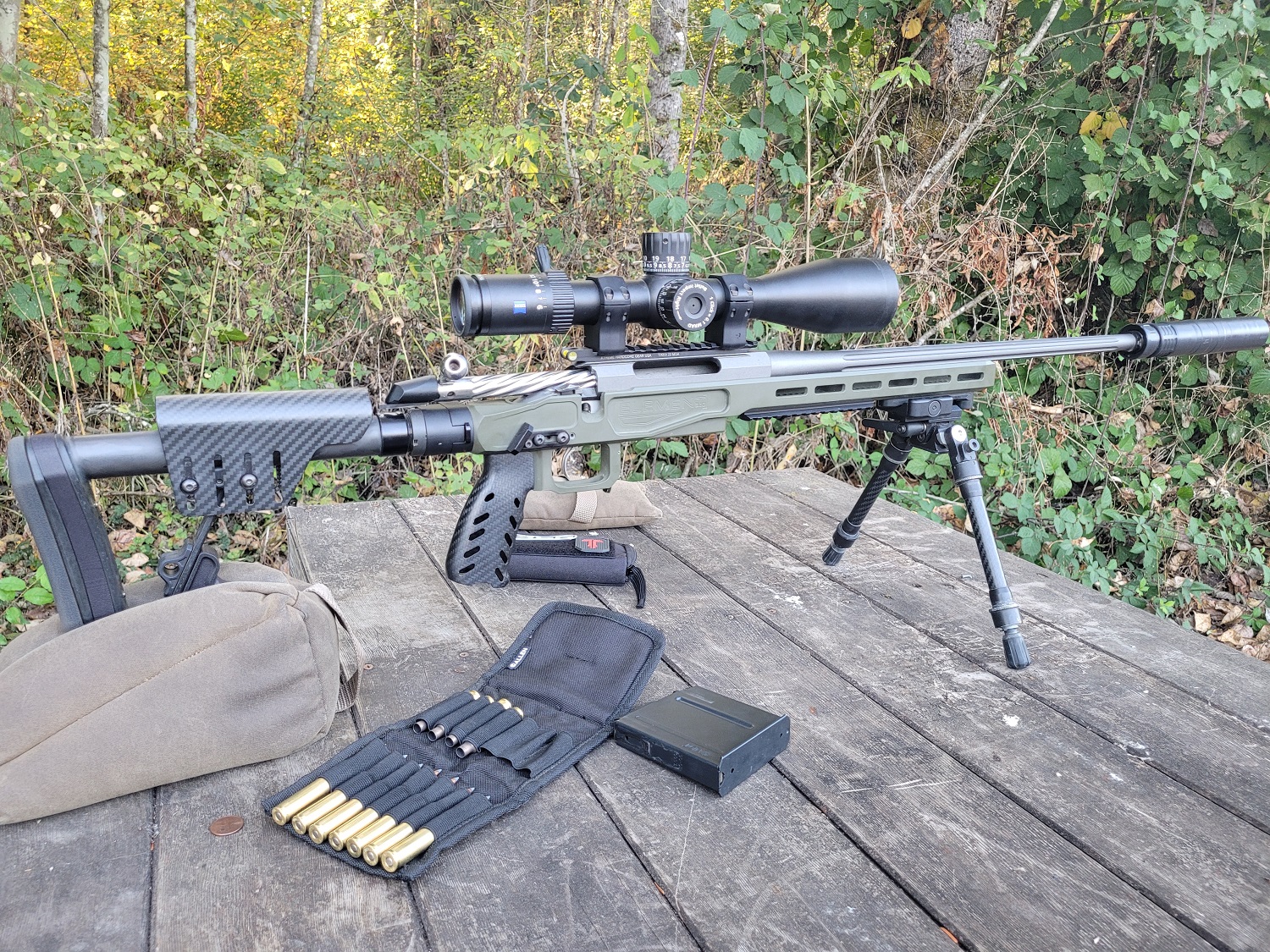 For deer hunting, I swapped the Zeiss LRP S3 over to a lighter 6.5-06 AI and zeroed it. The rifle was carried by hand and also rode around in the truck and SxS for over 10 days before it was fired on the hunt.

My son and I spotted a buck he liked and watched it bed down behind some brush. Without a clear shot, we waited for over four hours for an opportunity. We had the Zeiss LRP S3 dialed and ready. When the buck finally stood at 298 yards, Dylan made a perfect shot, and the buck was dead on his feet. Once again, the scope performed precisely as it should, and we had a great buck on the ground. 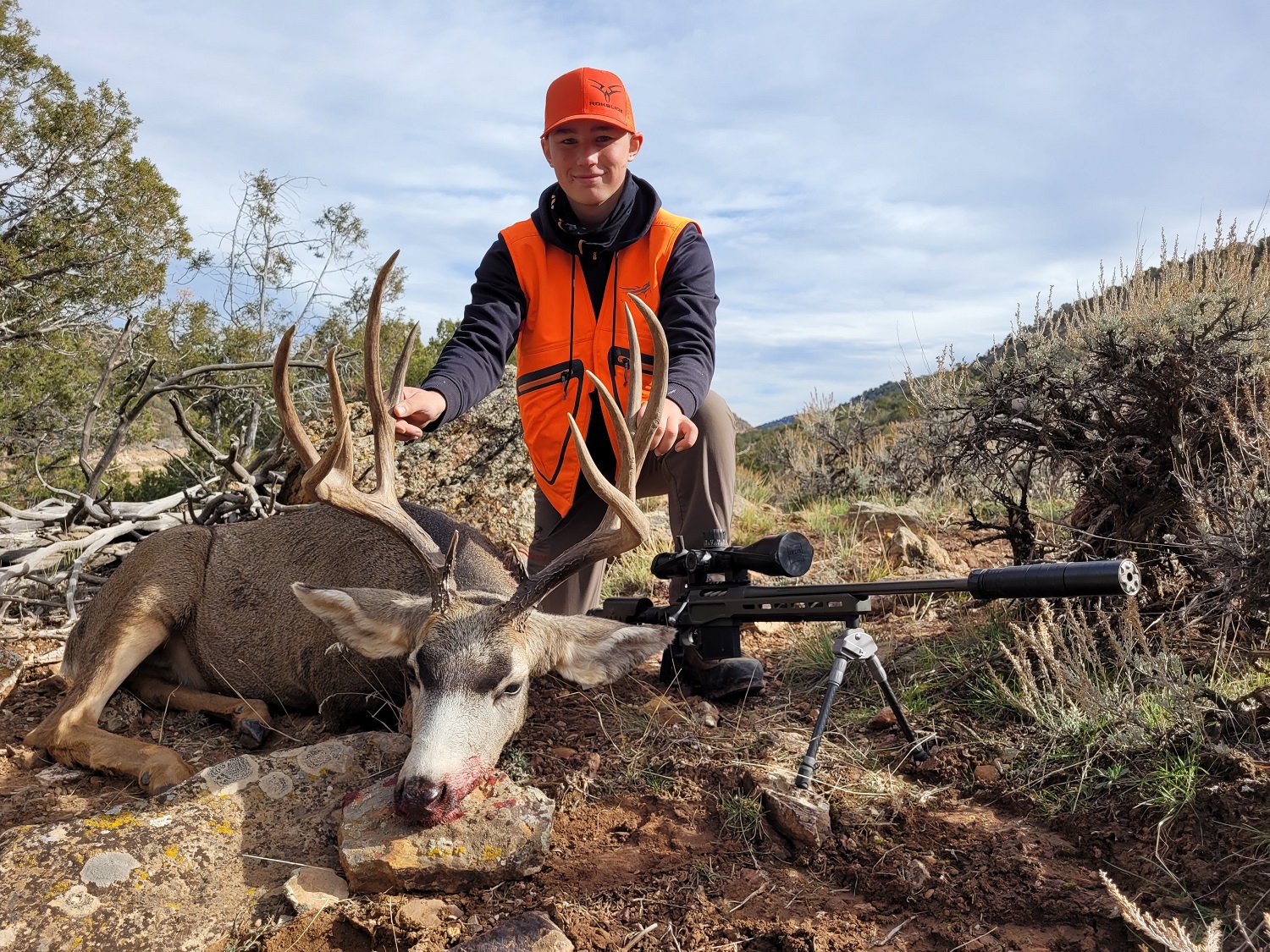 The Zeiss LRP S3 636-56 has worked very well this season. It held zero and dialed accurately each time it was tested. It’s heavier than I like, especially for hunting. The glass is exceptional, and the 6-36x zoom range makes it ideal for shots from near to far. With a price of $2500 retail, it’s a significant investment but worth the price to shooters looking for a scope to do it all. I liked the turrets, reticle, and illumination features. I would be confident in using it for hunting and competitions in the future. For more info or to find a dealer, click here.

Comment on this review or ask Justin questions here.

Check out the rest of our optics reviews.

Elk Hunting with the Cooper Model 52