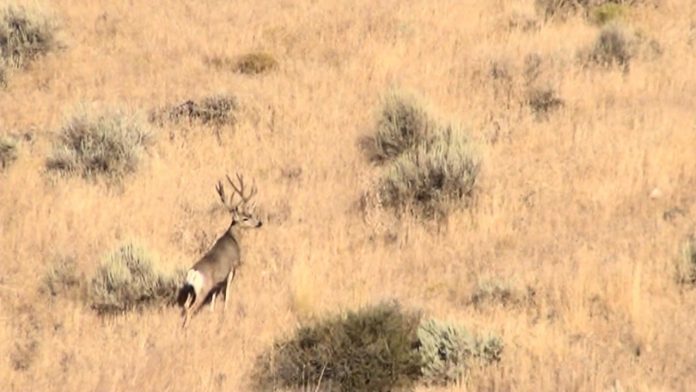 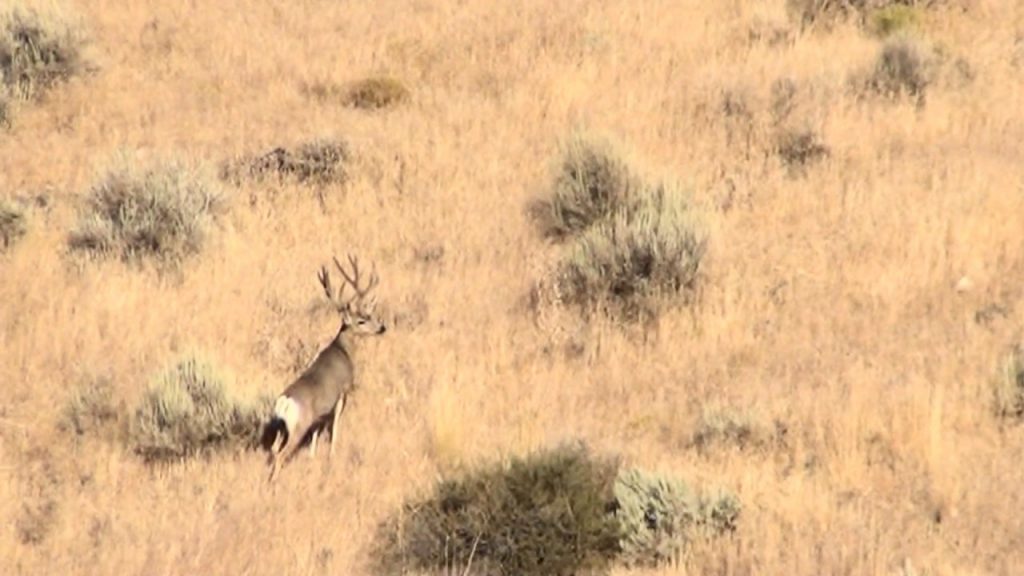 It had been 10 days since I found the giant Idaho buck.  Due the terrain he lived in, I knew killing him with a bow meant still-hunting through the timber hoping for a shot.  I probably have a better chance of orbiting the earth in my own homemade rocket.

Idaho allows two deer tags in certain areas so I decided to give that other good typical I’d caught on the trial camera a chance before stalking the giant buck.  I questioned my decision to do this for days, but the smaller typical was living in an area where I had a legitimate chance of spotting and stalking, about the only sure-fire way to kill a big deer with a bow.  I decided to give him a few days before heading for the mountain the giant lived on.

Opening morning of archery, I hiked the desert mountain range in the dark to the place where I knew the typical buck might be.  By 9:00 AM, I hadn’t spotted him, nor the other nice non-typical I’d seen earlier in the summer in the same country.  I noticed a hunter on the ridge above me easily visible on the skyline about 3/4 mile away.

Suddenly, 800 yards down the canyon I was glassing, I spotted both the typical and non-typical making their escape through a saddle.  By their behavior, I could tell they’d either winded me or seen the other hunter on the skyline.  I took off after the bucks hoping to see where they might bed for the day.

As I crossed the same saddle they went through 20 minutes earlier, I noticed the hunter above me had moved down the ridge towards the saddle, too.  I figured he’d seen them also, but I was much closer to the direction they’d gone so I stayed with the stalk.

I went about 200 yards farther and was about to crest a small hogback that would give me a view of several big draws where I figured the bucks might be hiding.  About then I saw the hunter above me waving his arms wildly at me, all the while standing on the skyline (I still can’t believe this happened).

I can only guess he was trying to tell me he was stalking the bucks, but I was at least several hundred yards closer to their suspected location than he was.  I try to be sportsman-like but I guess I’m not sportsman enough to give some flailing fool my stalk, so I continued sneaking up the hogback.  That’s when he started yelling some choice words that I’m sure he learned in junior high, and then stomped back up the mountain.

I knew any buck worth his hide would hear the fool’s antics.  Sure enough, when I peeked over the hogback, the big typical was hightailing it out of there.  I flipped the camera up, but he made it over the far ridge and I only caught the smaller non-typical before he, too, escaped.

In the video, that non-typical is looking to my right–exactly where Mr. Crybaby was having his hissy fit.

Of course I hunted for several more hours and then three more days, but I never could turn those bucks back up.  Big mule deer don’t put up with racket like that and it seemed they’d either moved out, or went nocturnal.  Strike two for 2016.

It was time to head for the mountain where I’d seen the giant buck….