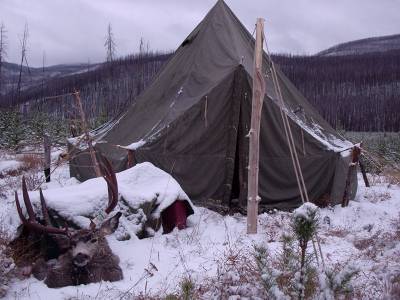 Adjusting your application strategy according to your budget (time and money,) changes in draw odds, new hunts, and what you learned the previous hunting season need to be reconsidered yearly.  If you don’t, you’ll waste money, time, and miss opportunity.

I took this heavy Montana buck in late November 2009.   Like all  Western States, if you learn the deer country and how to hunt it, you can kill mature bucks outside of the hard-to-draw units.

I applied for Montana premium hunts for years while falling back on their general deer license as a backup.  This allowed me to build bonus points and still get to hunt the rut with a rifle, a dying opportunity across the West.  Montana isn’t widely known for big bucks, but like all states, a little scouting can up those odds.  I did kill one good buck up there that lab-aged at 6 years old.  I saw very few hunters once I penetrated the deer country, so it was a quality hunt to me.

However, once Montana’s general deer tag went to $600 and they started squaring points, I dropped out.  The general deer is just not worth that much compared to the size of bucks Montana offers versus what I’m seeing in other states.  Also, I didn’t have enough points to take advantage of the new square formula.  Squaring really only helped non-residents with lots of points, so I just put the money back in my budget and left my points on the table.

I have a good friend in Montana who I love to hunt with, so I may return someday if my schedule and budget allows.   There is more to hunting than just big antlers.  Finding a friend you like to hunt with is a “trophy” in and of itself.

For years, I also built points in Oregon.  Unfortunately, I never really understood their non-resident cap, which is extremely low at 5%.  Before draw odds got really bad these last 10 years, I was probably getting my money’s worth as their license was around $80.  However, with worsening draw odds, a license jump to $140 bucks, and Oregon’s policy of giving the outfitters the non-resident tags every other year in the units I was interested in, I dropped out.

I even wrote their Game Commission a goodbye letter which they promptly responded to in an effort to keep me.   It was too late.  I left 5 points, over $500, and a lot of research on the table, but I’ve never looked back—simply not enough value for the dollar to keep applying.  If I lived in Oregon, I know I could fare better as I could scout and resident draw odds aren’t as bad.

Wyoming is at the top of my list for big deer, even though their potential has declined a lot the last 10 years.  While Wyoming limits non-residents, her residents can hunt much of the state on a general tag, so pressure is high.  Western Wyoming got hit with two bad winters, ‘07/’08 and ‘10/’11.  That might sound like a while ago, but they are still hurting.  Even with these effects currently going on, Wyoming is still a good value to me most years because I live so close.  In about an hour, I can be there.  This allows me to scout and hunt frequently, and is the reason some of my best deer have come from the Cowboy State.

I did not apply for Wyoming this year, however.  My Colorado muzzleloader hunt will conflict with the dates and I’ve been seeing better bucks in Colorado since Wyoming’s winterkill.  Colorado costs me more due to travel costs, but the current opportunity justifies the cost.  You always need to add in the information and wisdom you gained the previous hunting season to refine your application strategy.  I’ll apply for a point in Wyoming’s point application period this summer, and will likely apply for a license in 2014.  I don’t want to let my points get too high in Wyoming, as I’ll end up in the no-man’s land like I am in Utah.

We’ll talk Colorado in my next blog.  If my PM box at Rokslide is any indication, she’s at the top of most deer hunters’ lists of places to hunt.  We’ll answer the question, should it be?

Have you ever dropped out of a state, even if you lost money and points?