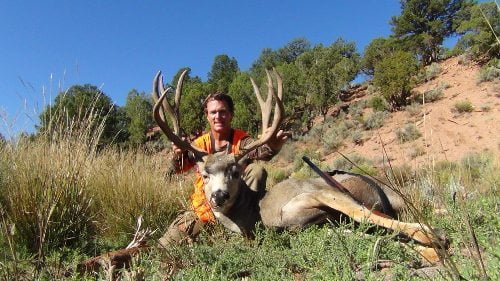 Each week, I answer several emails/phone calls/and Rokslide PMs on the subject of Colorado mule deer hunting.  Rightly so, Colorado has always held the #1 rank in B&C mule deer entries—typical and non-typical—in the world.  Although the Centennial state started to slip in the 90’s, once limited quota hunting was implemented in 1999, Colorado again secured her rank at the top of the heap.

I first started hunting Colorado in 1993 and have seen and taken some of my best bucks there.  While many states struggle to maintain 20 bucks per 100 does, Colorado frequently reports buck: doe ratios north of 30, even in units with lots of licenses.  She’s simply a mule deer machine.

So with all the hype, should you be hunting there?  Well, this goes back to some of my earlier blogs about time and budget.  If you live close to mule deer country that holds your goal buck, Colorado may just be a distraction.  I’ve learned to focus on my home state of Idaho, but look to Colorado for opportunity I can’t find closer to home.  Colorado probably should be on your list as a place to hunt but don’t be enamored by her reputation.  Big deer are earned there and there aren’t any shortcuts.  Here are some of the obstacles you must overcome to be successful.

Lots of people (and I don’t mean just hunters)  Colorado was listed as the 3rd fastest growing state with 30% growth 1990-2000.  Everywhere I’ve hunted in Colorado, I’ve found it’s hard to be alone.  If you think packing into a vast wilderness far from roads will mean seclusion, think again.  Case in point: I found some bucks summering in a high country basin in July one year.  When I returned for the hunt in September, no less than 15 tents were set up in the basin and not one was a hunter’s!  Those bucks had long been spooked out of the area.

Lots of private property issues  Much of the best habitat, especially for the rifle seasons, is on private ground.  A smart hunter can use this to his advantage, but many are caught off-guard if they haven’t thoroughly researched their unit.   Due to Texan influence over many decades, much of the best ground is leased and a smile and a handshake won’t get you anywhere.

Point creep  Since Colorado began limiting deer licenses, this phenomena has turned many units, even some that just offer mediocre hunting, into once-in-a-lifetime-at-best draw hunts.  I know of several that used to take one point to draw and offered good hunting.  Now, they take five to fifteen points, although the hunting is no better than it ever was.  This problem is only going to get worse in the foreseeable future.  Point banking, tried in 2006, would help, but it would take 3-5 years to work and too many hunters oppose it right now.

Overlapping deer and elk seasons   While you might draw a good deer tag, your hunt will still likely be impacted by OTC elk hunters.  Colorado hosts the West’s biggest elk herd and a mind-boggling amount of elk hunters in most units.   I’ve hunted units where I’ve seen few deer hunters but there were elk camps in every turnout and meadow.  A smart hunter learns to work with the elk hunters, but don’t be deceived, they do impact the hunt quality.

A highly migratory deer herd.  While you might find some great bucks summering in Colorado’s high country, unless you possess a muzzleloader, archery, or high-country rifle tag, most of the bucks above 11,000 feet will have moved miles by the time the October rifle hunts open.  Scouting can be a frustrating endeavor for these bucks.

So all things considered, do I recommend Colorado?  Yes.  I think if a hunter gives himself 5-10 years, he could take a great buck and possibly several.  However, he needs to prepare himself physically and mentally for the challenges I listed above.

What issues have impacted your Colorado hunt?

(PS, you can subscribe to Rok Blog at the top of page and receive an email notification immediately when we post.)