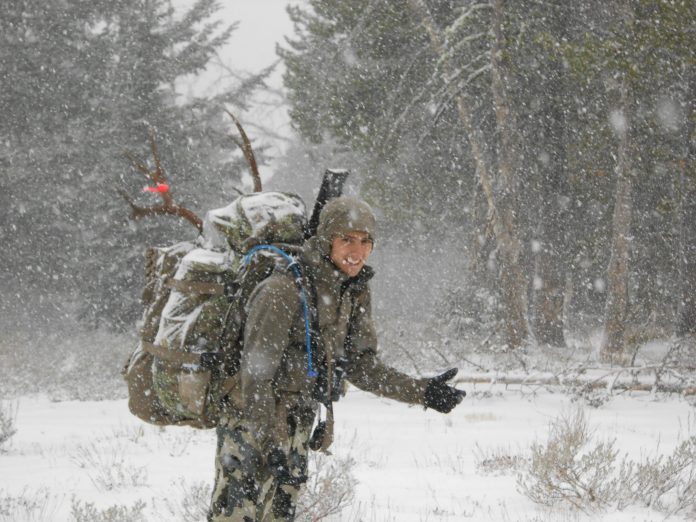 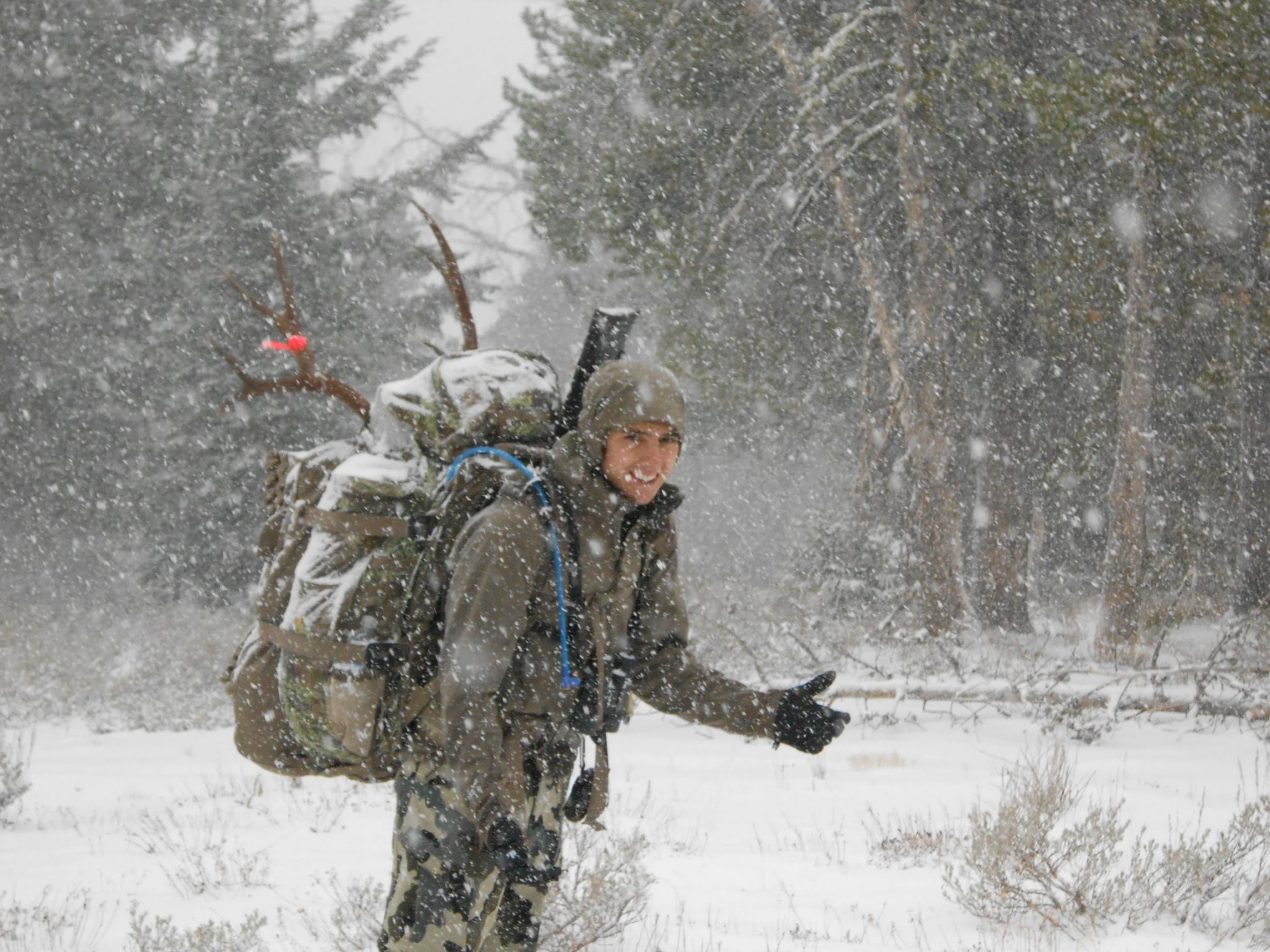 I slammed my tailgate, got a couple more clicks out of the ratchet straps holding down our gear and checked the trailer lights. Good to go… My phone navigation told me I had a day’s worth of seat time ahead to dream about the upcoming hunt.  To me, that’s the point where the rest of the world takes a backseat to hunting season!

Growing up hunting & fishing, this routine was nothing new. Many seasons, my step-dad Doug and I have made many trips…some successful, some not so much. When we decided we wanted to hunt Idaho mule deer again this year, I was instantly excited. The last time we’d tried our hand there was 2008 and the results were less than we’d hoped. However, now I was armed with more experience and was more motivated than ever to succeed in the backcountry.

We arrived at what would be base camp mid-day on Saturday and set up the Kodiak Canvas tent and a few other amenities. We checked our packs to make sure they were ready for the next four days of bivy hunting. We then found a nice little ridge near camp to glass from until the sun was gone. It’s these first night glassing sessions that seem to make me forget about all of life’s stresses that accumulate between hunts. I still remember as a young kid and the excitement of Christmas Eve robbing my sleep before the next morning. Decades later, laying on my cot, I experience the exact same feelings.

As the sun crested the hills the next morning, we were at the top of the saddle where we left the trail and bush whacked up the ridge. Our intent was to glass a series of small bowls along the way. By the time we reached the fourth bowl it was mid-day. We boiled water for a warm cup of soup and drank a Starbucks Via to help take the chill off. The weather was still pretty decent, but cold. 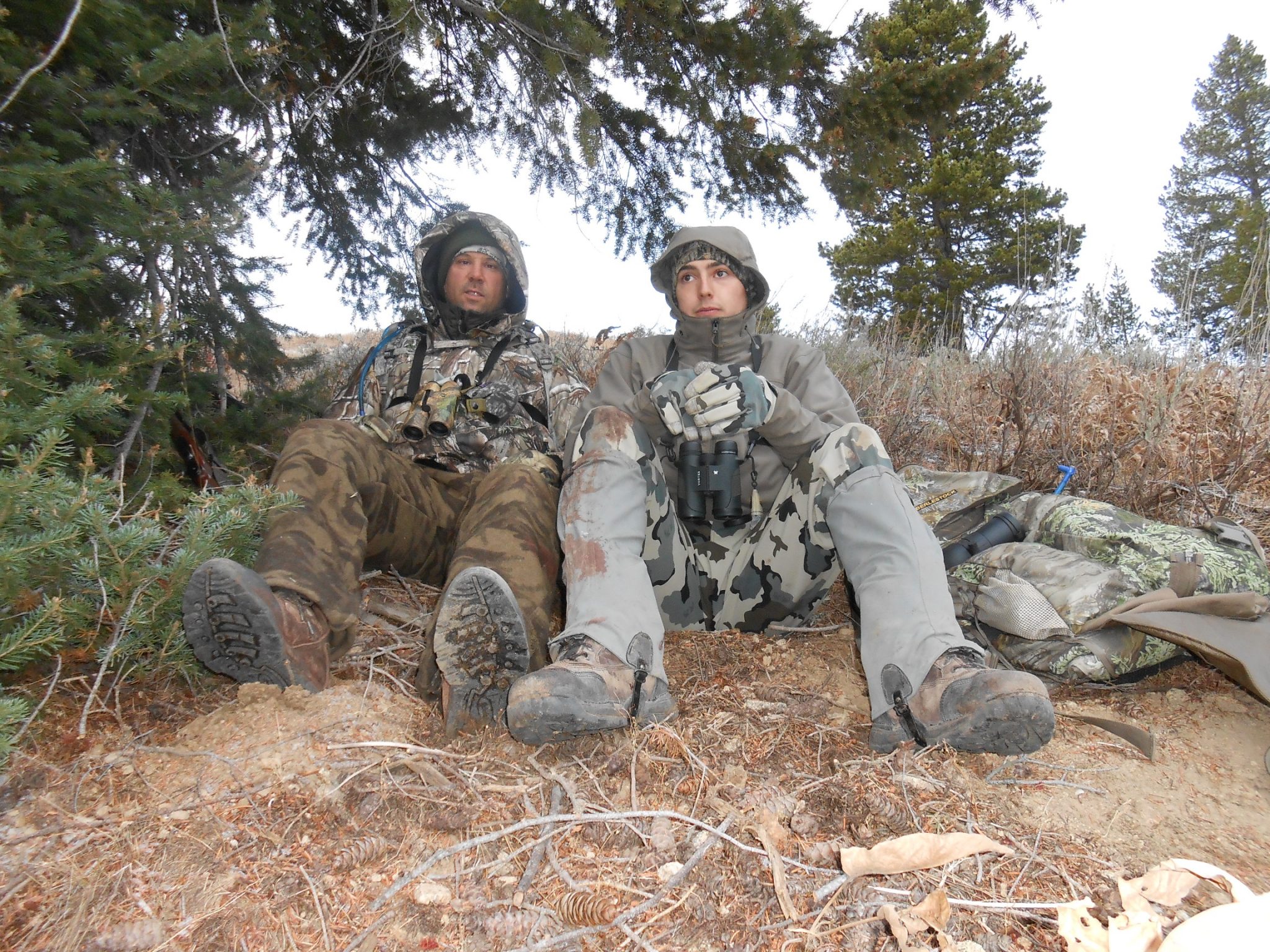 After some more glassing, the hillside in my spotter started moving. A herd of elk was feeding in the sun about a mile away with a nice bull in it. Although we didn’t have elk tags it was still incredible to watch this backcountry monarch tend to his harem. That epic scene with the sun glistening off his antlers as I watched through the Minox spotter sparked a new fire inside me to pursue a bull elk, but it would have to wait for another day.

With no deer found and only a few hours of light remaining, we decided to head back toward the 3rd bowl and pitched our tents in a small patch of trees concealed from view in the shallow basin. We found a quasi-level spot about 20 feet inside the tree line, cleared the ground and pitched the tents.

With camp set, we headed to the edge of the bowl to work the glass until dark. After only thirty seconds behind our binoculars, Doug hissed those infamous words that will snap every hunter to attention, “There’s a deer… IT’S A BUCK!” Neither of us are particularly big trophy hunters and since this was a heavily hunted, OTC unit, it was quickly decided that he was a shooter. We slowly slipped back into the timber. The deer was bedded about 400 yards away under a tree and offered no shot. We had to get closer. 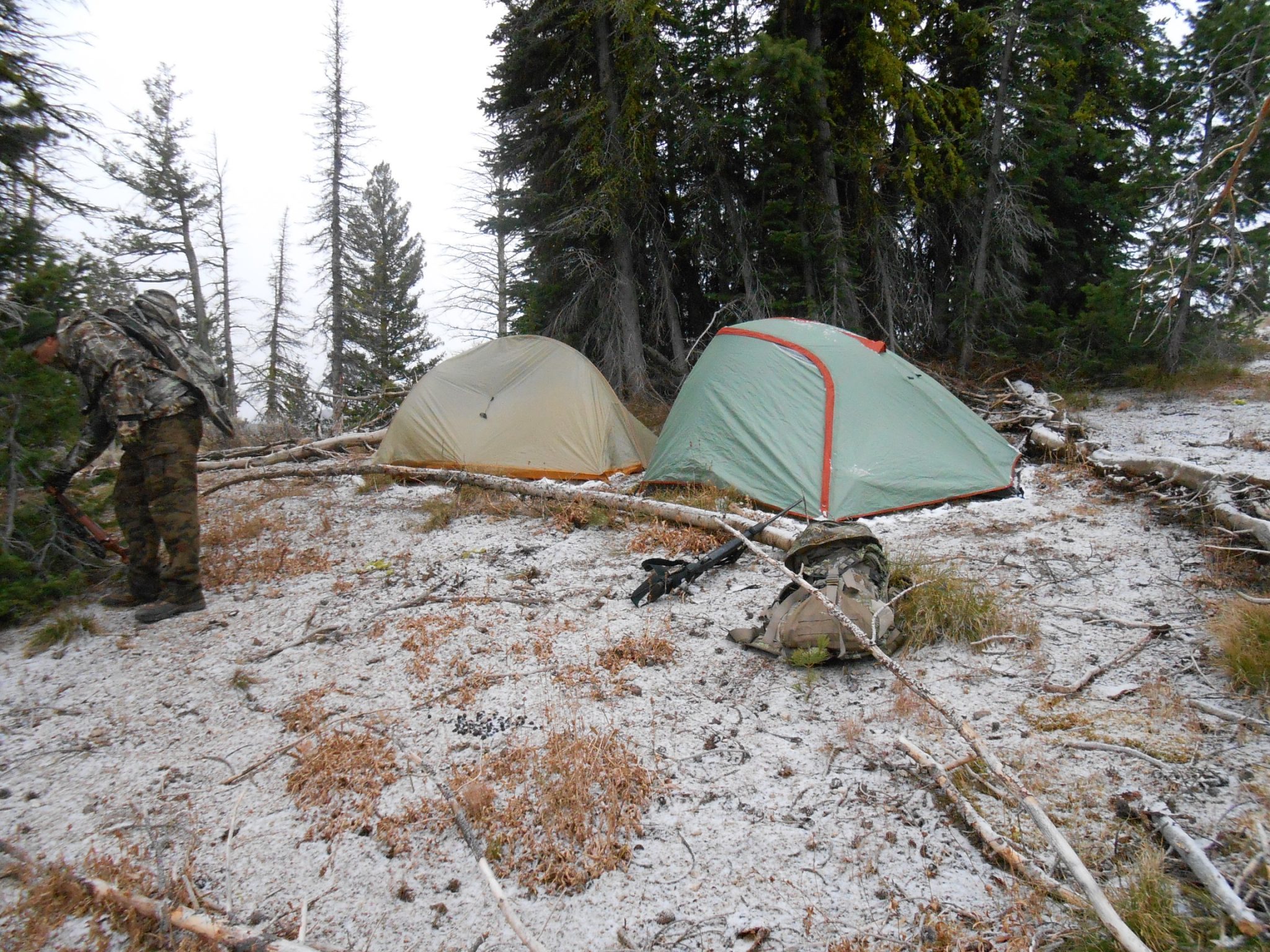 We went back to the tents, ditched some gear, and got ready for a stalk. With over an hour of light remaining we felt confident we had time to get within range. We followed the ridge toward the head of the basin and started sneaking our way down. When we were within about 150 yards or our landmark, I stopped and sat down. We could not see him and the wind had switched direction and was now wafting our scent toward the buck.

After a few moments, I was beginning to think that he had given us the slip because we could see several escape routes. I stayed put as my step dad moved down lower toward the deer. As Doug worked closer, I caught a glimpse of movement in the gully that lead out of the basin and realized it was him! I snapped my rifle up and quickly got him in my scope and whistled, hoping he would stop and allow Doug to get a shot. The deer stopped for a few seconds, but there was no shot from Doug… The buck started trotting so I whistled again. This time he froze broadside. I touched off a round and the rest is history. 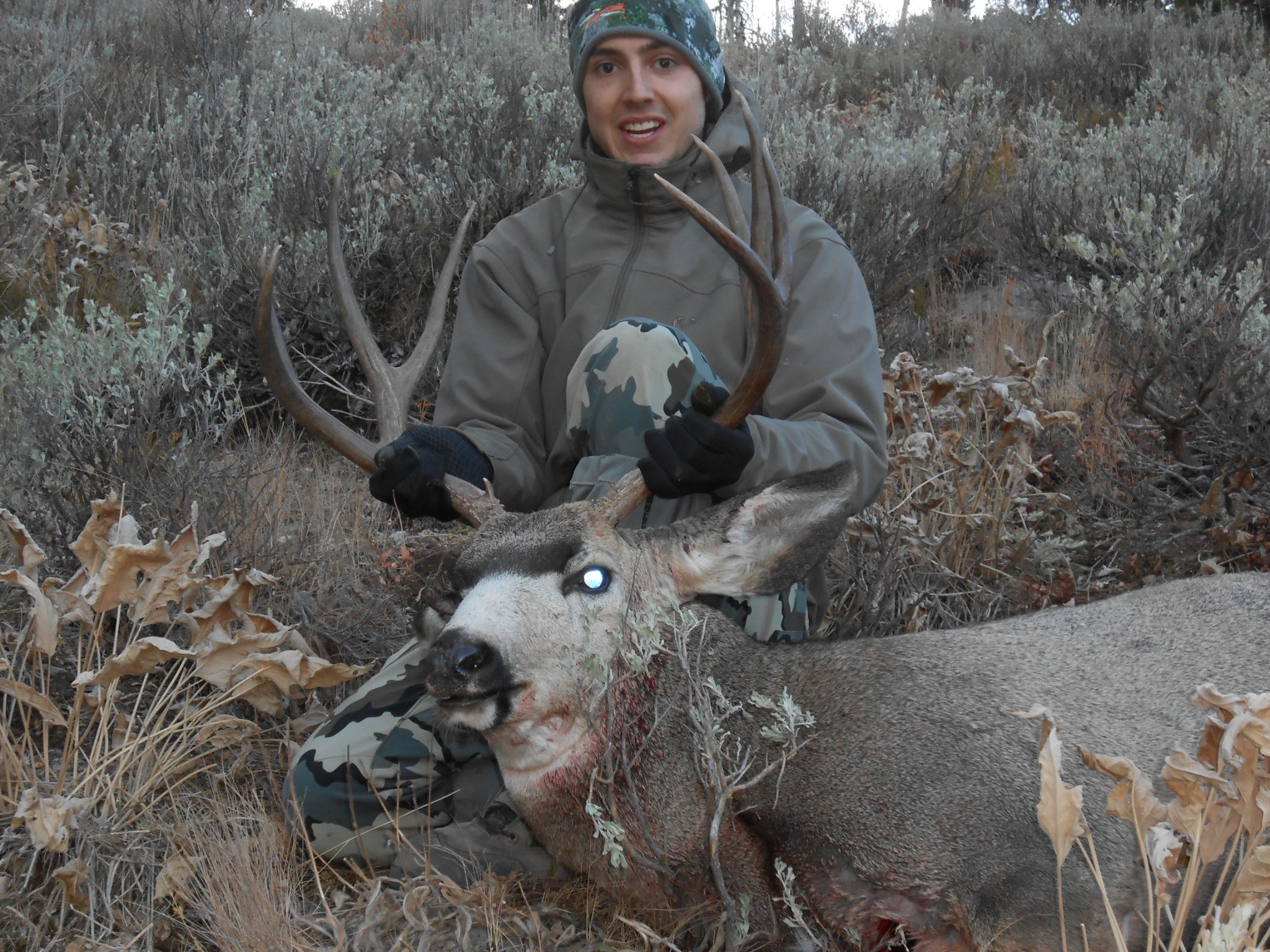 As it turned out, Doug was just low enough that he never saw the buck until the instant I shot. When we got down to him, he was bigger than we thought. We celebrated a bit and recounted the experience while we took pictures, caped and quartered him. We packed him to the top of the saddle in one trip by the light of our headlamps, hung the game bags in a tree and then headed for the tents.

We woke the next morning with a light dusting of snow, but 30 minutes later it was a full on snow storm! I have to say that a steep pack out in the snow can humble a guy real quick.  Back at base camp, we took a much needed day of recovery. The snow didn’t let up for three days and we ended up having to break down camp and move it down the mountain for fear of being snowed-in!

After a short hunt down low, Doug filled his tag and we headed for home with mission accomplished. It was a great hunt filled with physical and emotional challenges that were both educational and humbling.  A lot of experience was gained and the lessons will not be soon forgotten. I would like to say, “Thanks!” to Doug for being a great hunting partner & step-Dad!