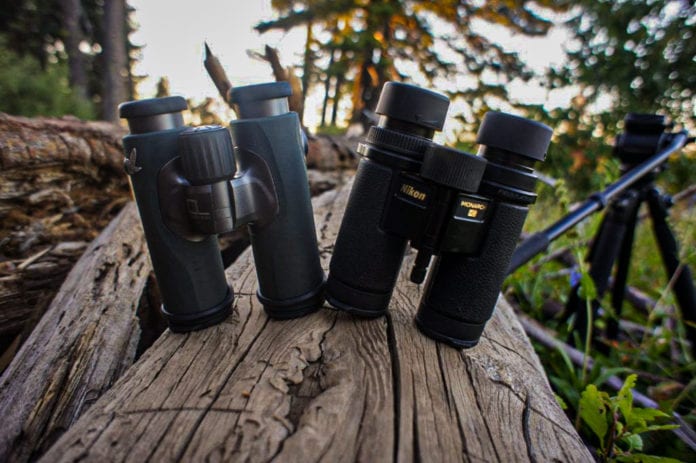 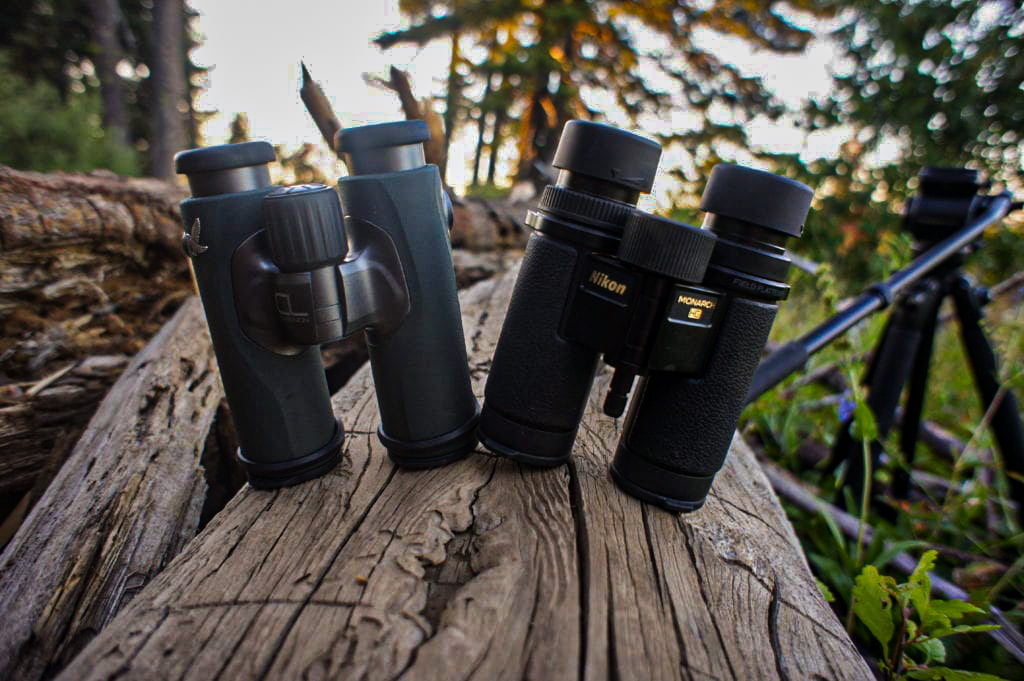 While often bigger is better, both Nikon and Swarovski have packed their compact binos with high-end glass while keeping the form factor small and light. 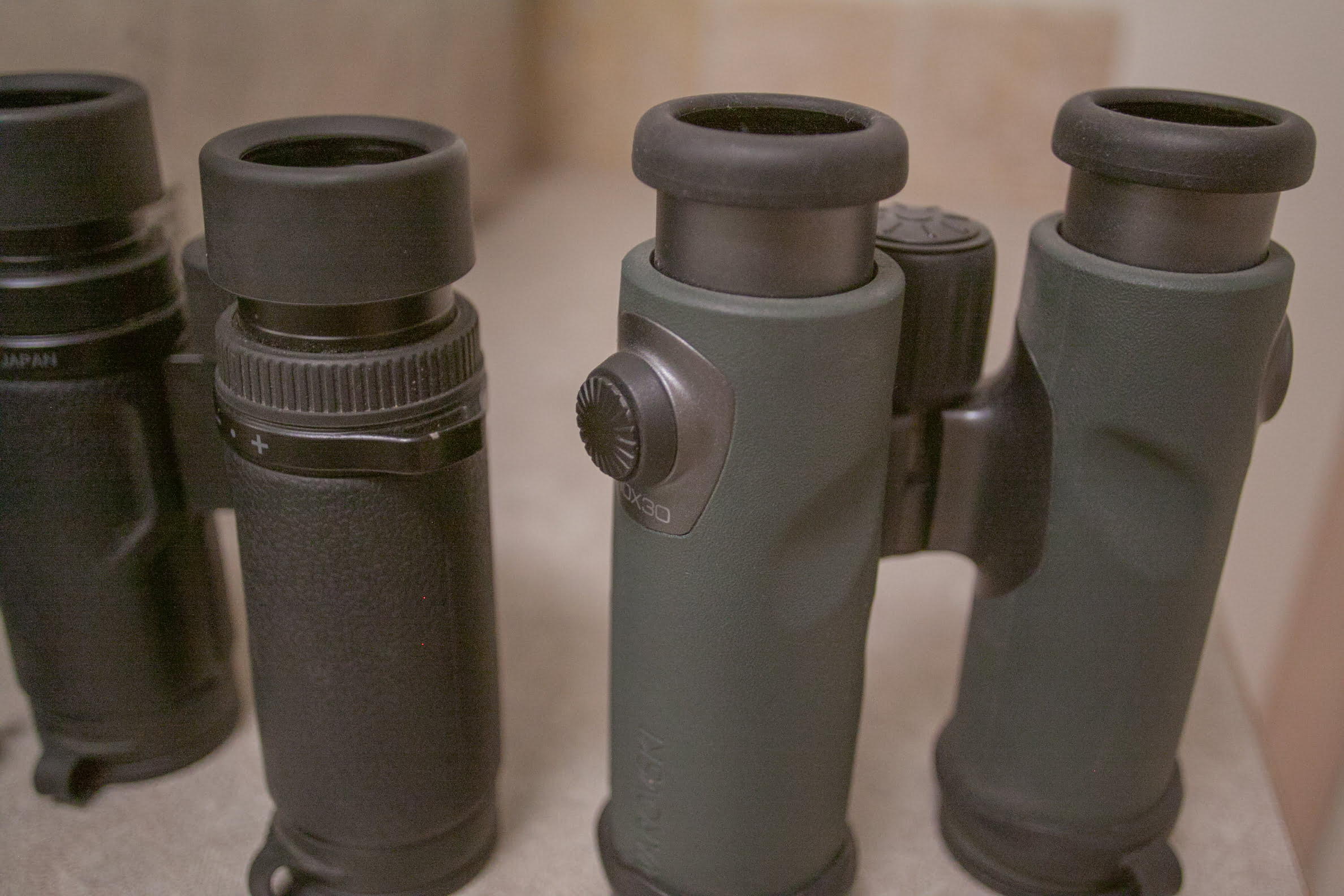 My initial impressions of both of these binos were pretty positive. They were lightweight and easy to hold with my hands. The typical Swarovski exterior coating and dimples on the bottom of the barrels felt better in-hand than the Nikon’s rubberized coating. As far as initial impressions, that’s where the Swaro’ began to lose the edge. 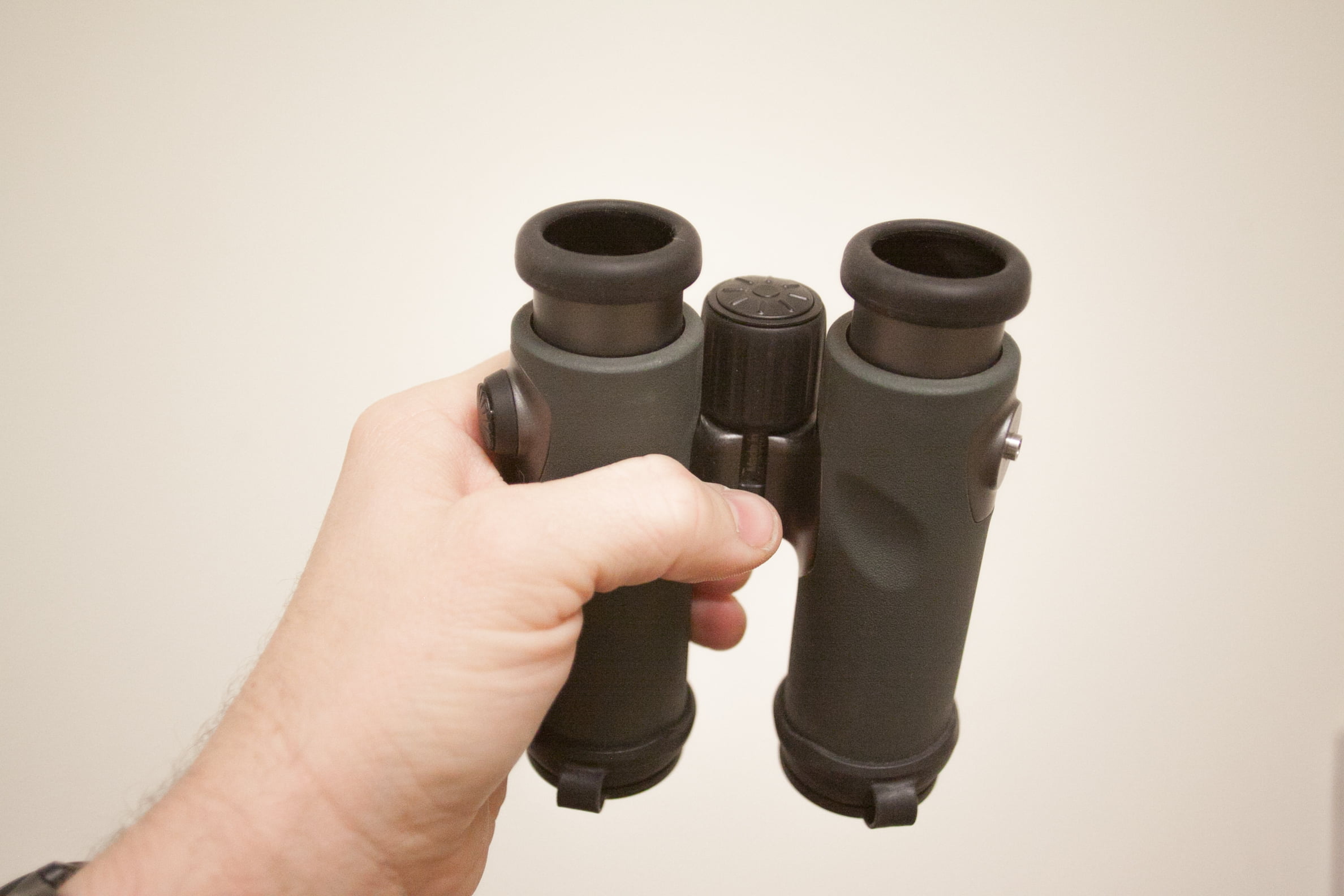 The diopter adjustment around the barrel of the Nikon was much easier to use compared to the updated CL’s adjustment. The adjustment for the diopter was annoying on the Swarovski CLs since you have to push down the center of the focus wheel while rotating it. 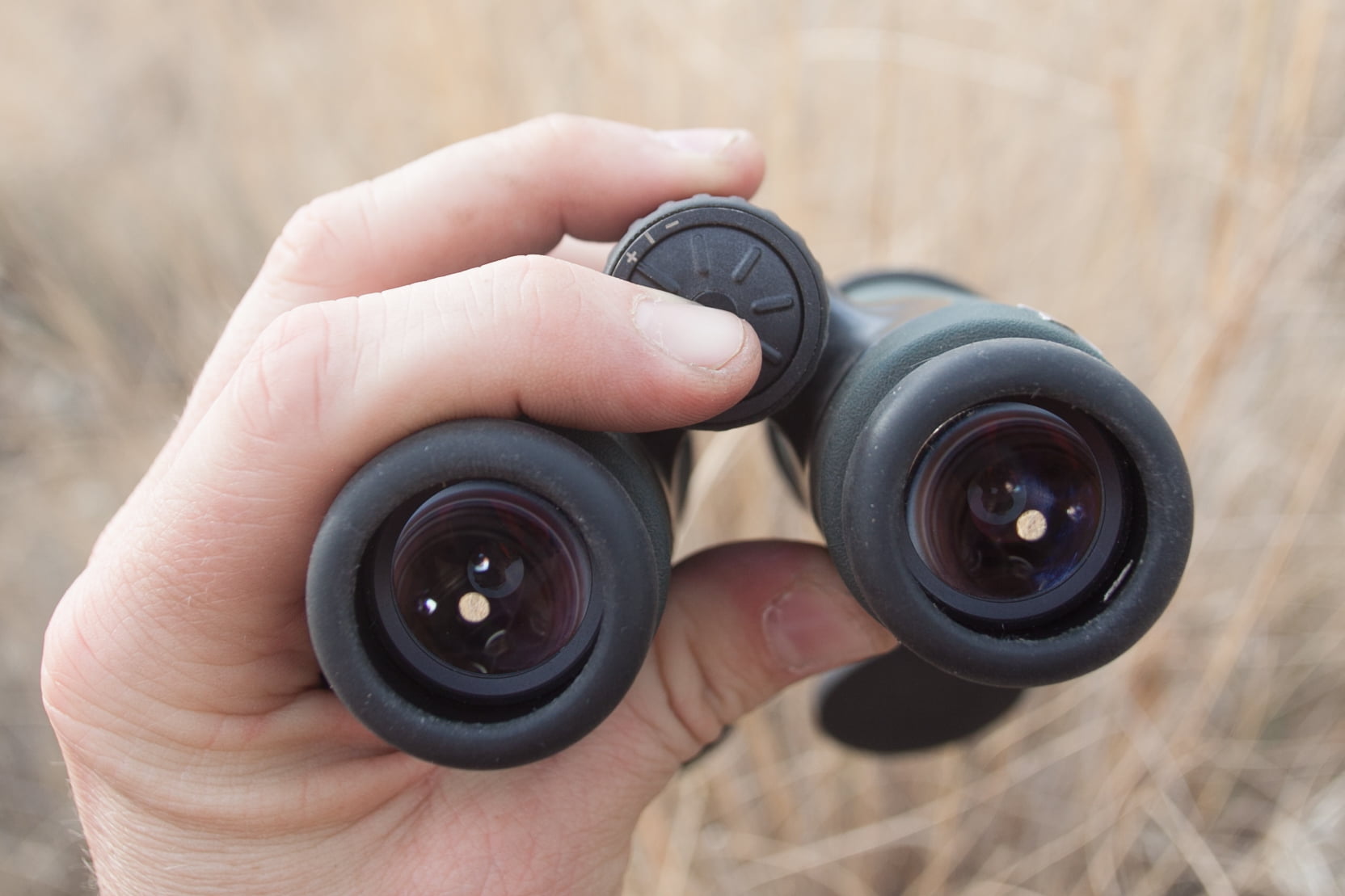 The eyecups on the CL Companions have a more comfortable texture. They are also removable, which makes cleaning out any accumulated grit a breeze. Nikon’s “in, halfway, and out” allowed me to get the proper eye relief, compared to feeling like I needed to move my head around to settle into the smooth roll and lock from the CLs on the Swarovski. 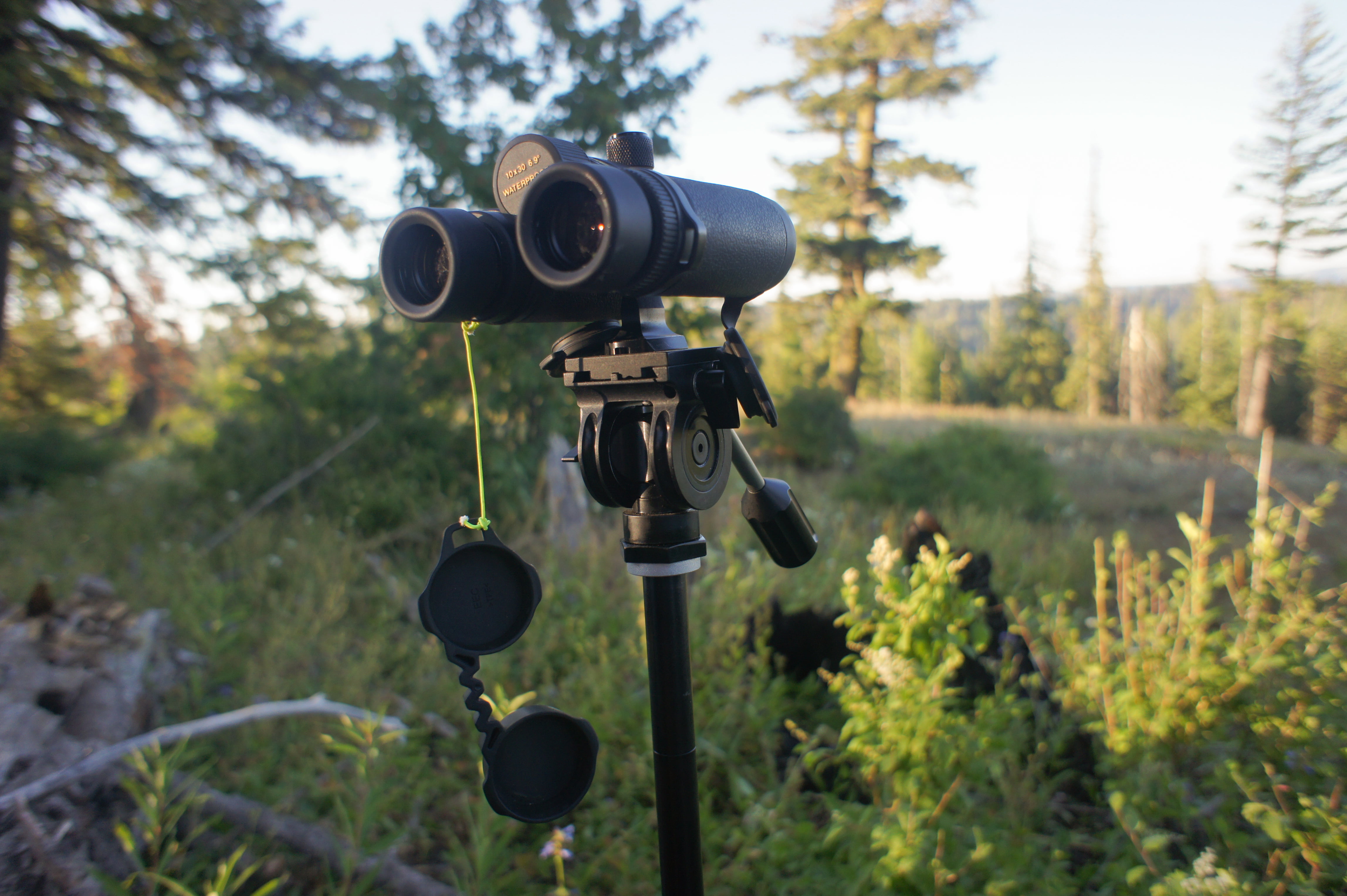 I often set binos onto my tripod, so WHY WON’T SWAROVSKI PUT FREAKING THREADS ON ALL THEIR BINOS?! Okay, now that I got that out of the way, having threads on the Nikons made setting them on my tripod as easy as “lefty-loosey, righty tighty.” I currently use the Outdoorsmans’ Binocular Adapter with the Nikons. I spoke on the phone with an Outdoorsmans rep, and he said Outdoorsmans doesn’t offer a stud for the CLs. Since the Outdoorsmans’ Bino Hand would be too large for the CL’s barrel, I went with a universal adapter I bought a while ago off of Amazon. 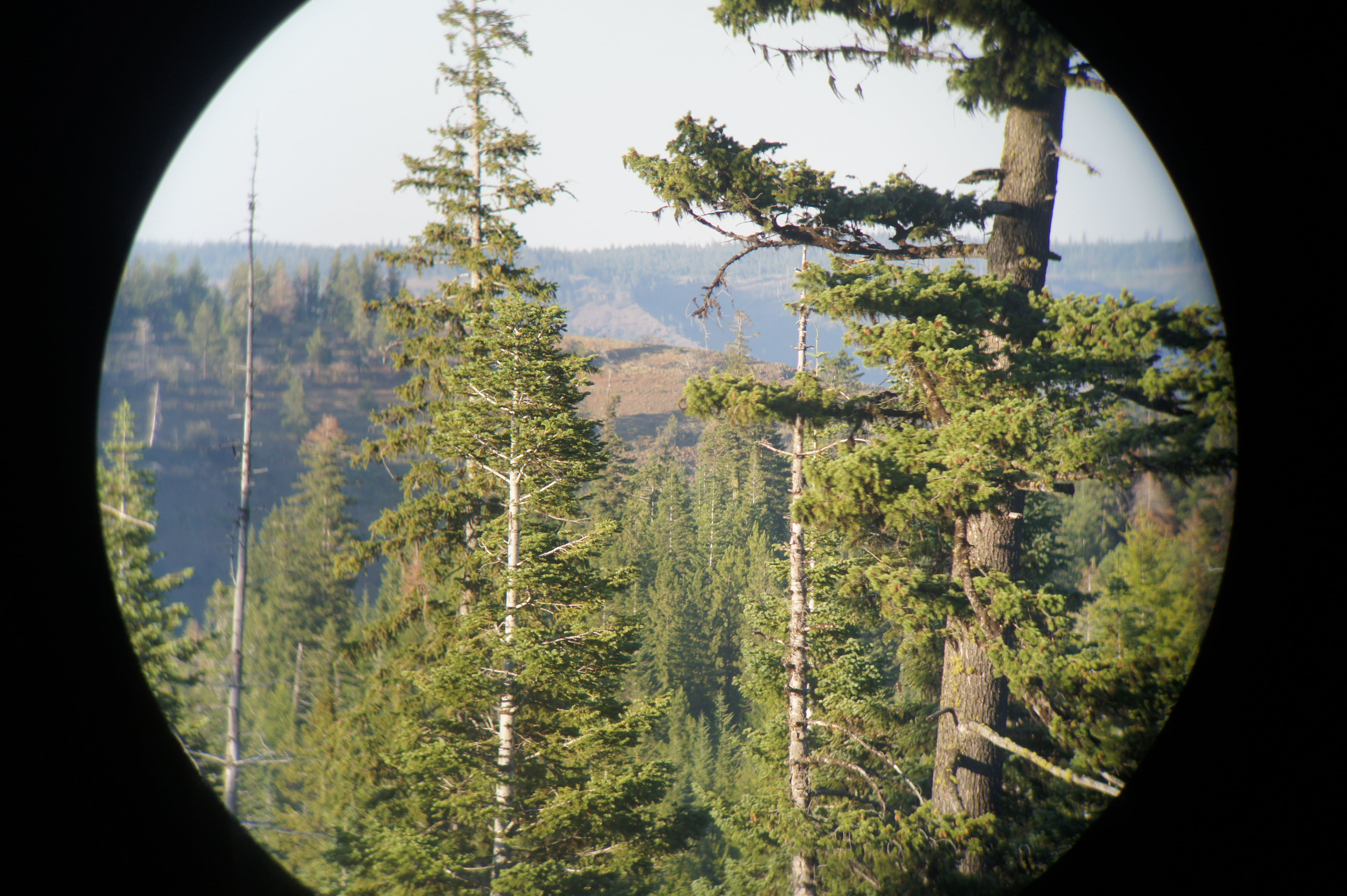 I put both of these binos up to some basic optical testing, starting with a “redneck depth-of-field test.” To conduct my test, I picked a spot around 150 yards away and set my focus on it. Then looked out into the valley to where the image became fuzzy. While the Nikon provided a good depth-of-field, the Swaro’ allowed for more glassing without having to touch the focus wheel.

For the field-of-view (FOV), Nikon advertises 6.9* compared to Swarovski’s 6.2*, at 900 yards. The Nikon provided a slightly wider image. Once again, not being very scientific, I picked a telephone pole, and I put it on the edge of my glass. Then I settled on the binoculars, I counted guard rail posts. The Nikon gave me an extra three posts over the Swarovski. 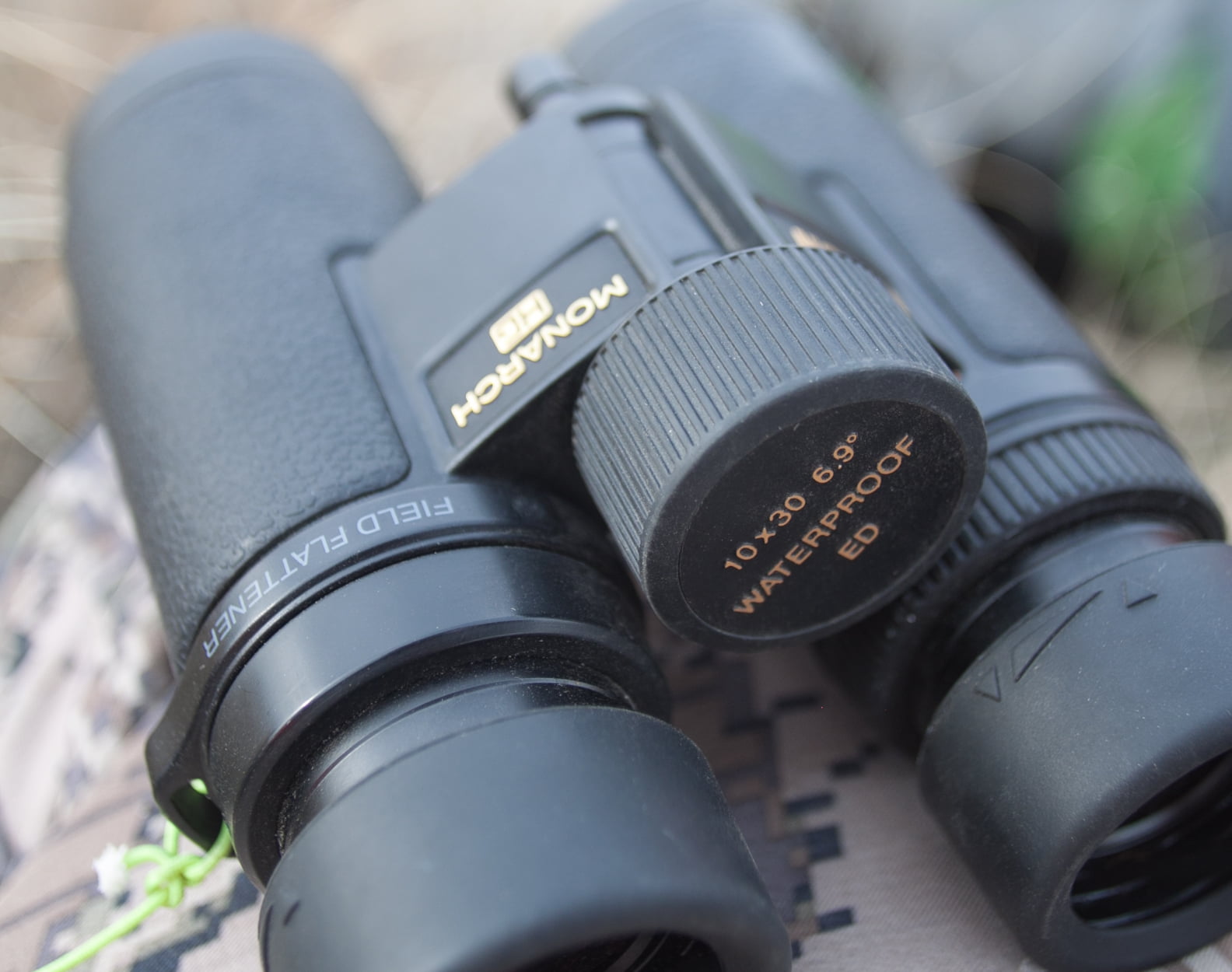 When I performed resolving tests, both at mid-day and twilight, the Nikon edged out the Swaro. They were so close on the mid-day test, that with the Nikon I could clearly see the vertical and horizontal bars. When I tested the Swarovski, I was only able to see the horizontal bars on the 1951 USAF resolving chart. As far as the late evening viewing, the Nikon allowed me to see one minute after the Swaro’s tapped out. 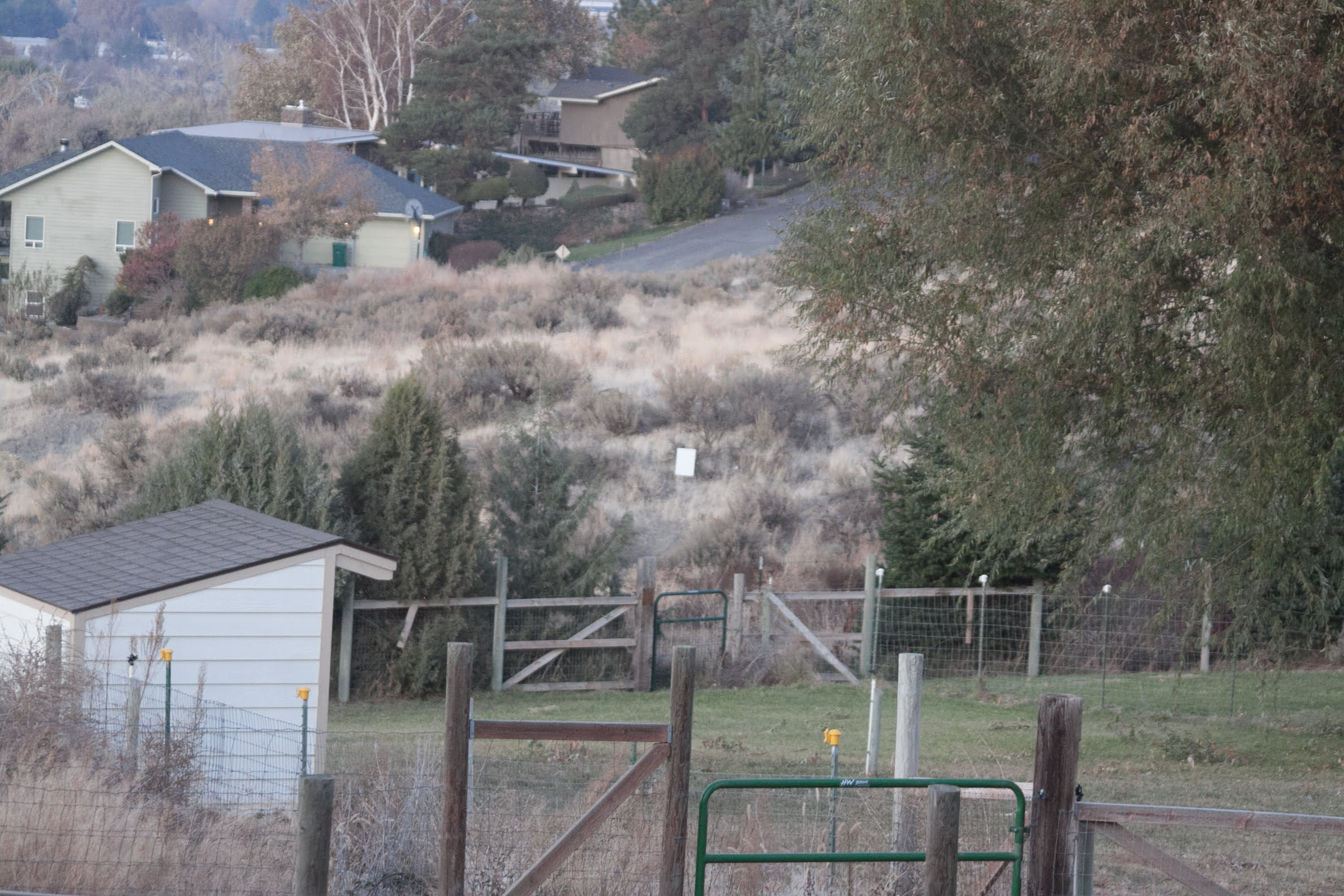 Both of these units did exceptionally well on my hunt and though the tests. Taking into consideration the price tag of the Swarovski ($1,321) vs. the Nikon ($970), Nikon is a great deal for anyone who wants to go compact and lightweight on their binos. That said, the extra 12mm of the objective lens on my Swarovski EL allowing me to glass into dark timber pockets from a distance, was worth the weight penalty and will stay with me. But when still-hunting through aspen patches in Colorado along with glassing open hillsides, both of these units would be good options.

You can comment on this article or ask John questions here.