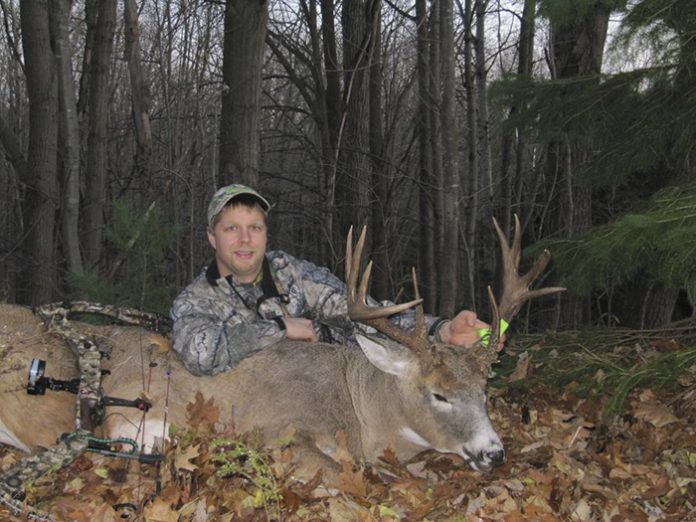 After a 3 week stint in the Rocky Mountains, I was finally able to hit the woods for Wisconsin whitetail in early October. I was scouting a large tract of wooded public land hoping to find another giant like the buck I arrowed last year. 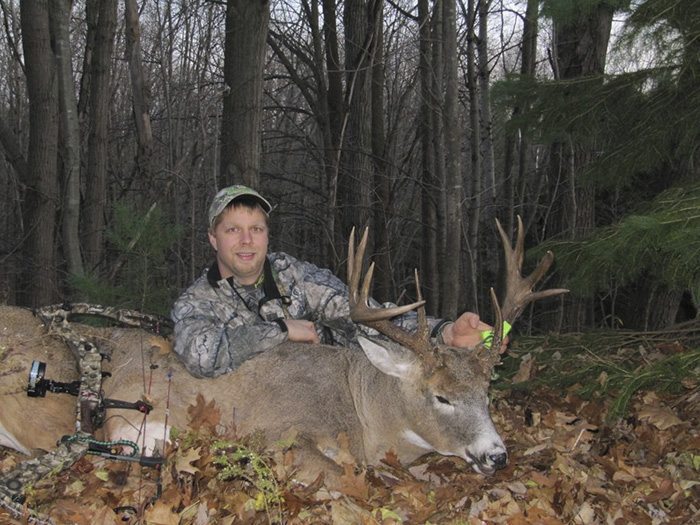 I found three areas I really wanted to take a closer look at using aerial photos and topo maps. The early youth rifle hunt was going on in conjunction with archery season, but I knew I would be far enough from the road to minimize competition from other hunters. After several miles and hours of hiking I identified a couple areas with good sign so I made a couple sits in the area over the weekend. The hunt provided plenty of deer sightings, but no bucks I was ready to hang my tag on yet.

The second weekend in October I drove 3 ½ hours to scout and hunt near my cabin in northern WI. The woods there are big and unbroken and hold far fewer deer. This makes for a different style of hunt where peace and solitude abound. In fact, the odds of seeing wolves are better than deer on some days. I knew there would be good bucks close to home, but I wanted to figure out if this spot would give me a better opportunity to tag a monster buck at the end of the month when the hunting gets hot. 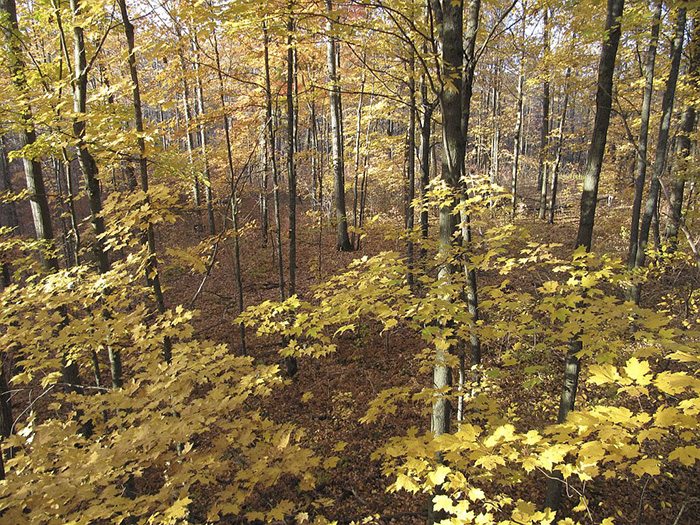 I put in a lot of hours and miles over the next two days scouting both new areas and proven ground from past hunts but had a tough time finding good sign. My elk hunting partner who has a cabin about 10 miles from mine was also struggling. We met at the local restaurant after hunting hours to compare notes. We both found very little deer sign and lots of wolf and bear activity. Even one of my go-to spots where I harvested a great buck last year was nearly void of deer-sign. With the best part of season approaching fast I was starting to get anxious about not having any good options lined up.

The third weekend in October I was only able to hunt on Sunday so I returned to the area closer to home with good sign. I was disappointed to see that the deer had obviously switched food sources and Deer Central Station had turned into a deer ghost town. It was now the third week of October and I was back to square-one, burning boot leather. This was NOT the plan I had in mind, but this is often the game when hunting big-woods, public land whitetail. You can adapt and overcome or you can count on burning your tag.

Based on past I experience, I knew I had to keep scouting. I checked and crossed-off two more areas on the map. At a third location I finally found some good sign. The farther I got into the area, the better it looked. I found plenty of scrapes and some rubs. Things were finally starting to look promising.

I always keep a map, compass, and GPS handy while scouting. I take plenty of notes, and mark waypoints whenever I’m out in the woods. I noticed that I had previously circled a pinch point on the map close to my current location. Since I was already close I decided to check it out. There were big scrapes everywhere as I arrived at the funnel and broke into a great looking clearing with several several large rubs. It was some of the best sign I had seen in years. I knew I needed to hunt here ASAP so I headed back to the truck and jammed everything into my pack and strapped on my climber and Heads up Decoy (HUD). 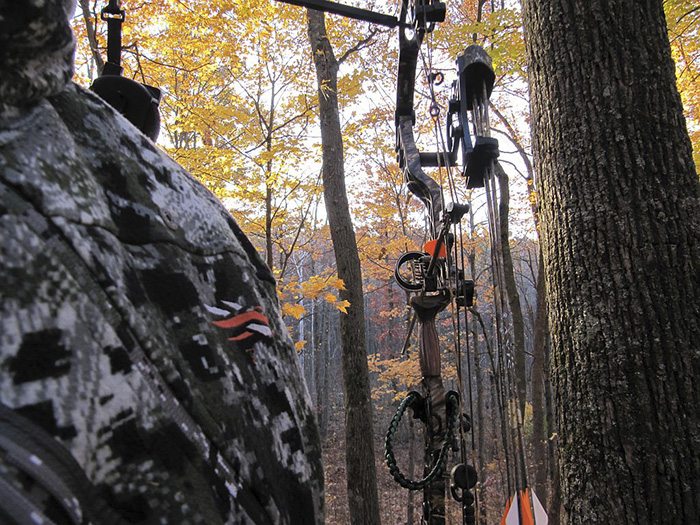 I selected a good tree at the center of a small hogback that would work with the wind direction. I placed my HUD about 17 yards out and climbed the big Oak until I was about 30 feet up. The ground in front of me dropped away so the decoy was about 8’ lower than the base of my tree. I set the stand so that the oak tree was between me and the direction I expected the deer to come from. I did that to help break up my outline. With my stand set and Mathews Heli-m hung, I finished getting dressed and let the birds and squirrels resume their routines.

The pre-rut period at the end of October is by far, my favorite time of year to hunt whitetails. Most guys say they prefer hunting during the rut – and for good reason. This is when bucks are running does and throwing caution to the wind. If you are in the deer, it’s an exciting time to hunt. You can see lots of deer and lots of bucks. However, the problem with the rut is that you have to be in the right place at the right time. You can only hope a doe leads the buck past you. The pre-rut is a different story. The big, mature bucks are actively moving about in their core areas AND they are callable! Decoys, grunt calls, and rattling horns are all highly effective this time of year and should be the staples of your pre-rut arsenal.

After a long two and a half hours I prepared to make my first rattling sequence. I turned and faced the tree and started three minutes of sporadic antler clashing. As I set the antlers aside I could feel the anticipation building as the knot in my stomach tightened. The big buck that I took just a year prior had succumbed to the same rattling sequence… I couldn’t help but wonder if history would repeat itself?

Seconds later I was startled out of my concentrated state as my cell-phone vibrated to life in the breast pocket of my vest. I was hurriedly tapping out a reply to my friend’s text when I heard, “Crunch, crunch, crunch, crunch!” It was that tell-tale, buck-on-the move cadence. He came looking for the fight he had just heard. 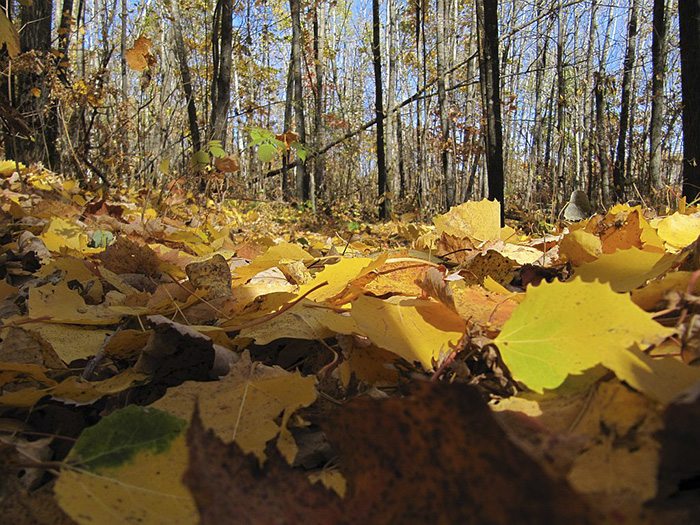 It took mere seconds to pocket the phone and grab my bow, but in that time he had broken into the hardwoods. I could see he was flanking my position and was now angling away from me and at a steady pace. I grunted at him as I re-hung the bow, but the rustling leaves obscured any chance that he could hear it.

I knew he wouldn’t go very far before stopping to listen so I grabbed the antlers again and smashed, twisted, and ground them together in a long exaggerated sequence that he couldn’t ignore. I was just setting the horns aside when I spotted him coming on a mission. He was about 80 yards away and closing fast.

I readied my bow as the buck trotted in and stopped 30 yards out. He was just below the ridge and couldn’t see the “deer” he heard fighting. With his ears flared and his tongue licking about his nose he continued with a heavy stiff legged gait directly toward my tree. All I could do was face the tree and hope he would give me a clue to which side of the tree he would pass on. If I picked wrong, I would probably not get a shot opportunity.

Finally, at 8 steps the buck elected to go around a small downed tree instead of jumping it. This enabled me to move to the left side of the tree. At the same moment the buck spotted my decoy only 20 yards away. The buck’s ears laid down and the hair on his neck and back bristled as he approached the decoy buck with the ominous swagger of his dominance in full display. He was only 4 yards from the base of my tree when he finally broke into the wide open. I drew the Mathews back, settled the pin on him and voice-grunted to stop him.

His head turned upward and his eyes locked on me at the very instant I touched the trigger. The arrow zipped through him! He looped 50 yards back on his trail and he tipped over in plain sight! I was instantly a complete wreck. I replayed the moment the arrow flashed through him in my head and I started to recall the impressive row of tines that lined his main beam. I hung my bow up and lowered my quivering body onto the seat. I proceeded to tap out an incoherent text message to my hunting buds and climbed out of the tree with extra caution as I knew I was frazzled and spent. 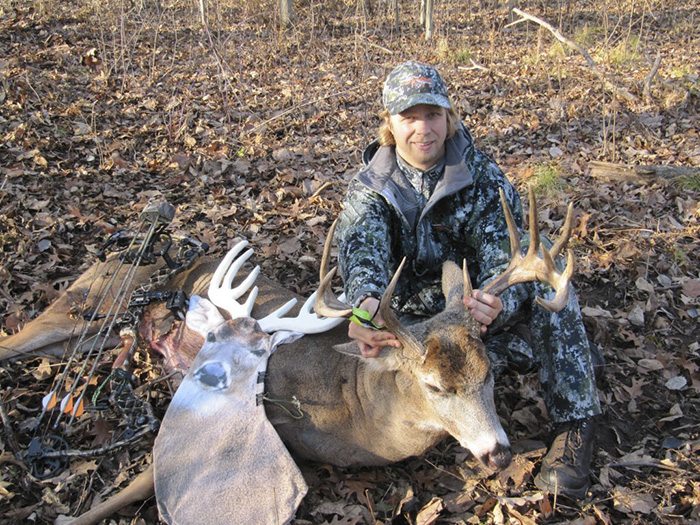 Walking up to the motionless buck was bittersweet, awe-inspiring, and emotional all at once. I sat beside him, lifted his rack, and soaked in the moment. I then gave thanks for everything that had just transpired. Writing this now and reliving the hunt brings back the vivid memories that remind me of all the wonderful reasons I love to hunt late October bucks.

Mystics Of The Hunt