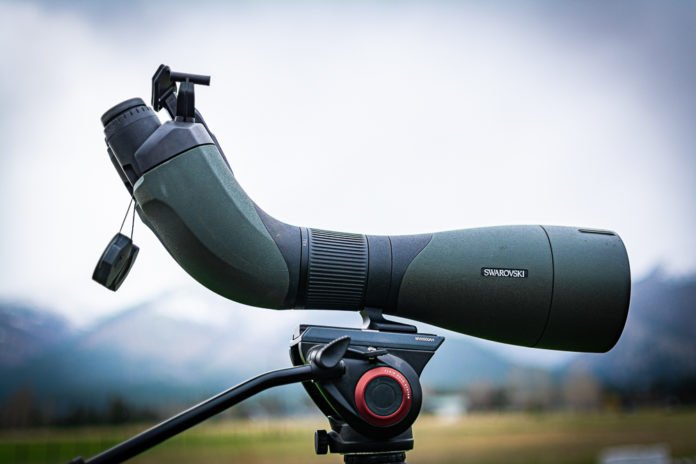 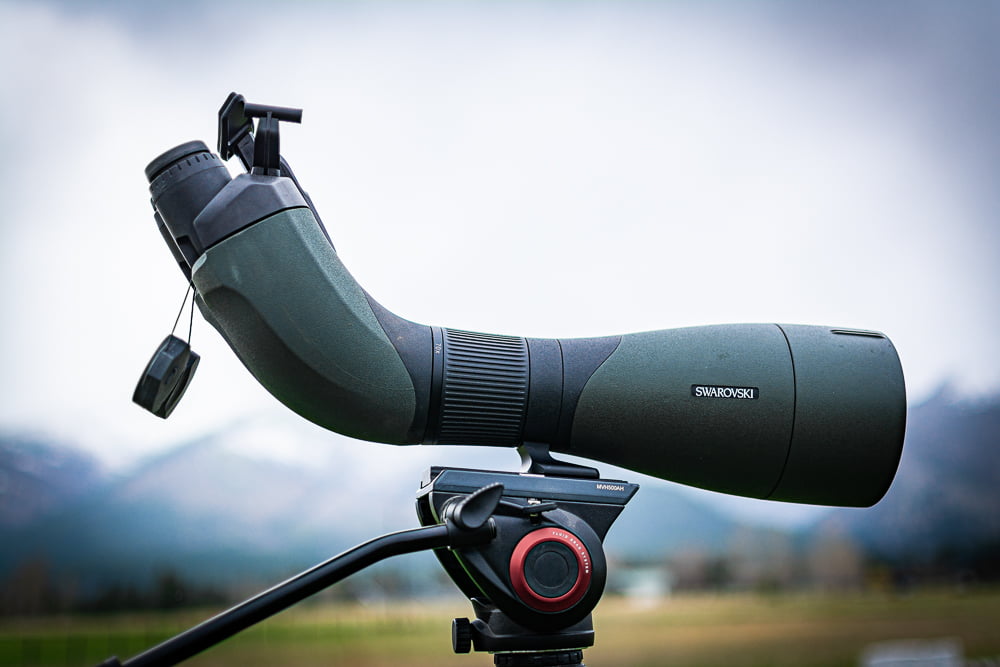 I have been using Swarovski’s flagship ATX spotting scope with 85mm objective since I originally reviewed it in 2013.  In the meantime, I still haven’t found a better hunting spotter, but Swarovski hasn’t rested on their laurels.  In 2017, Swarovski released the BTX binocular eyepiece for the X spotting scope system.  Binoviewers for astronomical telescopes have been available for years, but this was a first for fieldscopes.  The idea behind a binoviewer is a good one:  People see using both eyes, so why not use both eyes for glassing?  Our brain is used to forming a single, detailed image from both eyes. See the whole ATX/STX/BTX line here.

Swarovski tackled the problems by finding a balance.  They overbuilt the BTX into a super durable single focal length dual eyepiece, making 30x magnification on the 65mm and 85mm objectives while bumping up to 35X on the 95mm objective.  This meant it could stand up to harsh field use that ATX/STX owners were already putting their spotters through.  Swarovski did provide an avenue for users to find additional magnification, though, with the addition of the ME 1.7x extender.

The ME extender is essentially a ruggedized version of a camera lens teleconverter like those frequently employed by professional wildlife photographers.  The ME increases the scope’s focal length (and subsequently the magnification of the system) by 1.7 times.  So, when paired with the 95mm spotter, the 35x magnification is now a whopping 60x! 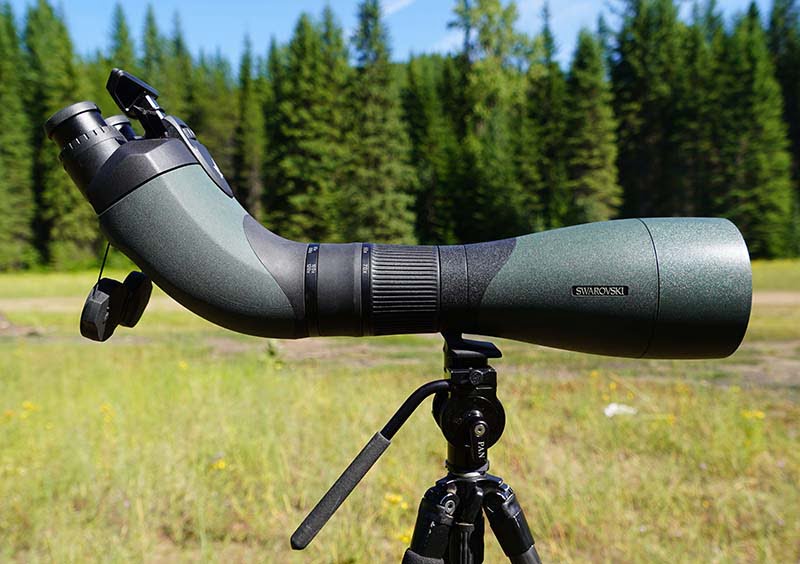 Impressive numbers, but I needed to find out how it worked for myself.  After begging and borrowing from friends, I was able to put the entire ATX/BTX system together in one place.  I took the whole pile into the woods while doing some off-season shooting, load development, winter range glassing, and general tom-foolery.  Add in a little boring resolution testing, and I came up with some lasting impressions.

Let’s talk about the BTX

Glassing with both eyes is better, period.  I noticed immediately the “ease of viewing” that the BTX provided.  It really can’t be overstated.  Viewing for long periods through a spotting scope has NEVER been this comfortable, and I have spent hours upon hours behind spotting scopes.  The advantage doesn’t end there, though.  You can see more small detail, easier.  The optical performance of the BTX is excellent with great aberration correction, and a bright, wide clean image provided to both eyes.  When resolution testing and observing an Edmunds Optical Resolution Chart at 50 yards, I could resolve the same element with both the ATX and the BTX at the same magnification, but the BTX provided that same element faster and cleaner.  Another interesting effect of the BTX was the advantage it provided at long distances.  Out at 1-2 miles, it seemed like the BTX had more magnification than it actually did, due to how easy it was to resolve details.

Some quick thoughts from Ryan Avery on the BTX

The BTX has a forehead rest that is easily adjusted with a wheel to get the proper eye relief and a convenient sighting device to get on target.  The BTX has Swarovski’s excellent twist-up eyecups, and the individual eyepieces can be squished together or spread apart for inter-pupillary differences between viewers.  Of course, the right ocular has diopter correction as well.

Downsides to the BTX?  Of course, weight, bulk, and price are the primary issues.  My ATX weighs in at 1.78 pounds while the BTX thuds onto the scale at a portly 3.13 pounds.  Plus the cobra hood shape of the BTX just doesn’t slide in and out of the backpack quite like the ATX.  With a bigger optic comes a bigger supporting tripod and head as well.  When matched with the 95mm objective, I really liked the BTX on a set of heavy-duty legs and a Manfrotto MVH500AH fluid head.  I was able to use my small Slik carbon fiber tripod and Manfrotto 484 ball head, but the larger fluid head was much more effective, especially for fine movements.  Don’t forget when it comes time to write the check, the BTX requires a substantial investment from the hunter at $3077 for the objective alone and up to $5365 when paired with the 95mm objective.

The ME 1.7x Extender

I had pretty low expectations for the ME extender.  I have seen teleconverters that worked extremely well in photography, but my experience with “boosters” in the sport optics world have been less than impressive.  They usually significantly degrade the image.

I was pleasantly surprised, however, by Swarovski’s extender.  When checking resolution with all three objective sizes, I could consistently resolve smaller elements on the resolution chart with the extender mounted to the ATX eyepiece.  The problem was the exit pupil gets really small at the high magnifications the extender provides, which would limit field usability to pretty bright conditions.  Also, mirage plays a significantly bigger factor at the super high magnifications with the ATX eyepiece.

Where the extender really shines though is with the BTX.  The magnifications with the ME of 50x (65mm and 85mm objectives) and 60x (95mm objective) are certainly useable under a wide variety of field conditions and really provide additional versatility to the BTX system.  I found even the 65mm objective was quite usable with the ME, but the 85mm was better, and the 95mm really makes the most of it.  At a cost of $421.00, the hunter can really increase the versatility of the BTX.

My thoughts on the ATX really haven’t changed since that original review in 2013.  After trying many different spotters since then, the ATX is still my favorite hunting spotter on the market.  All three objective sizes have their advantages and disadvantages, and the 85mm middle option is the perfect balance for me.  While I still get tired glassing for long periods of time with one eye, the weight and bulk savings of the ATX will keep it in my pack for most of my glassing needs.

The BTX is a revelation.  It offers the best long range, long duration glassing experience to the hunter available.  Aberrations are well controlled and the image is bright and clean.  The ME extender adds a lot of versatility.  The BTX is heavy and bulky only when compared against traditional spotters.  When compared to competitive “big eyes” binoculars, it actually saves a lot of weight and bulk.  For hunters considering big binoculars, they should look to the BTX first.  It is an awesome option for truck-based hunts, horseback hunts, and even backpack hunts where the glassing requirements are expected to be intensive.

The ATX/STX/BTX system is a comprehensive solution to the needs of hunters.  There are options that will cover every need from deep backpacking with the ATX 65 to stationary multi-day glassing with the BTX95.  The quality, fit, finish and performance are all first rate.  For hunters that can afford it, this is the best, most complete hunting spotting scope system available. View system here.