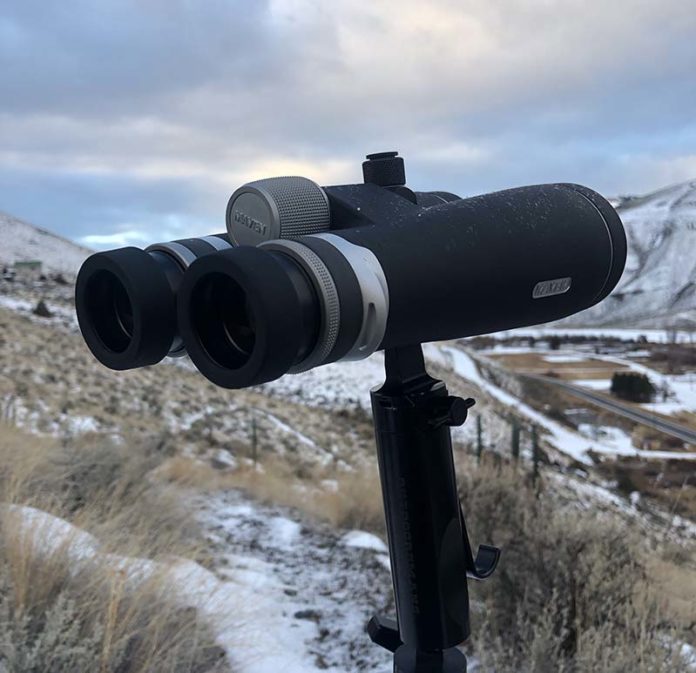 Last year while visiting the Maven’s world headquarters in Lander, Wyoming, the Maven guys showed me a prototype of what would become the B.5’s. What excited me about these binoculars was the fact that instead of handing me a pair of 15×56 binoculars, they handed me a pair of 18×56’s. I was like, ‘Oh shit. These are my people.’ If you know me at all, you know that I have zero use for 15×56’s, and get tired of all the top optics companies not even considering 18 or 20 power binoculars. In my opinion, the 12 EL’s work great for 90% of western hunting, and 15x has no real advantage over the 12x for my style of hunting.

Let me first clarify I am not an optics expert but, I spend a ridiculous amount of time behind many types of optics. It doesn’t take me long to figure out if the glass is worth me taking them on hunts. Too often I read optics reviews that blab about specs. However, all I want to know is, what would make them choose these optics to take with them on a hunt over another brand of optics, and why.

Why will I be taking the Maven B.5 18×56’s with me on all of my hunts this year? The answer is, for my style of western hunting, having 18x power binoculars give me the ability to spot and generally size up elk and deer at extreme distances without the eye fatigue you get from long glassing sessions with a spotter. Then if I need to up the magnification, I can use the doubler that gives me 36x. Think about that. That’s more magnification than the new Maven S.2 has for a small 6 oz weight penalty. All that magnification with a very low weight penalty!

Whats a review without some comparisons?

I compared the B.5 against the Sig Zulu 9’s 15×56, Vortex Kaibab HD 18×56’s and the Swarovski 15×56 SLC’s. Trying to find other 18x binoculars to get a straight apples to apples comparison was difficult, so I used what I had or could borrow. I don’t have anything scientific to gauge my comparisons, but I watch animals the last hour of light and the first hour of light. It’s simple and tells me what I want to know.

The Kaibab’s were not even a fair comparison. The B.5’s crushed them in every way. Edge to Edge, brightness, low light, fit and function.
Comparing the 15’s is not a fair on the brightness side but, both the Zulu 9’s and the SLC’s beat the B5’s, but not by much. The B.5’s and Zulu’s where almost too close to call. Unfortunately, I only had the Zulu’s for two days. I tried to be as unbiased as possible but, the Zulu 15’s, a very capable optic, could not compete with the B.5 18’s for long-distance glassing.

Most people would consider the 15 SLC the best of the best, myself included. I compared these two, and the 12 EL’s the most. I looked at elk and deer in the shadows at 900 to 1300 yards while bear hunting, a house cat at over 2000 yards, domestic sheep at what I guess to be four miles away on my training hikes. In the end, the 12x to 15x didn’t change what I saw. However, 15x to 18x was dramatic. Again, not to sound like a broken record, the glass in the B.5 is stunning.

Concerns I had about the B.5’s before testing them:

• Low light was a concern with the 3.1mm exit pupil. After a lot of nights glassing right until dark, this is a non-issue even on dark overcast days.

Things that surprised me about the B.5’s:

• How crisp objects and animals appear at extreme distances.

•  They are so much lighter than they look.

• The B.5’s are very bright. I was worried they would drop off fast on dark overcast days, but this was not the case.

• The warm tone/tint these binoculars have.

Over the years, I have tried to improve my glassing setup when I am scouting or hunting. There is zero doubt in my mind that being able to use both eyes will keep you in the glass longer. Glassing for more extended periods will most certainly increase your odds in finding more animals. The B.5 18×56 exceeded my expectations in every way and will be an easy decision to throw in my pack this fall.