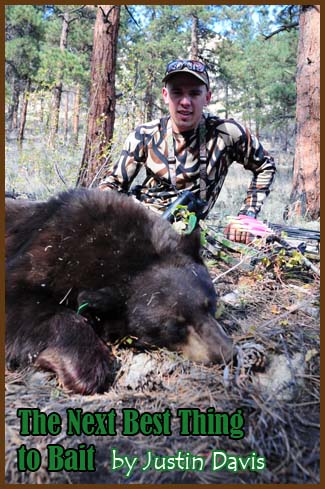 The Next Best Thing to Bait!

I silently crept through the woods in search of a bull elk. I was in thick timber but the sound of crows sparked my interest and I moved ahead. Knowing that crows can be great locaters of deceased critters, I was curious as to what it might be. I soon spotted a big black blob through the timber. A big bear was busy eating on an elk gut pile.

The sound of crunching bones echoed through the timber. The bear was totally oblivious to me. Bear tag in pocket I shook with nervousness. The bear faced directly away from me and I was offered no shot. I needed to move to get a shot at the unsuspecting bear that noisily ate 30 yards away. Right then, the wind swirled like it does so many times in the woods. The bear put his nose to the air and sniffed. I watched as the black beast disappeared into the lodge pole pine. I never did see that bear again, but the encounter was a thrill none the less.

It is no secret that hunting over bait is a one of the best ways to harvest a black bear in the lower 48. Hunting over bait allows you a good look at your quarry and provides good shot placement. The only problem is that in many states, including my home state of Colorado, baiting for bears is illegal. So what is a guy to do? How the heck do you go about harvesting a bear without the aid of bait? Some methods include predator calling, spot and stalking (with spotting being the key), and hunting over water or a gut pile. In my opinion, hunting over a gut pile or waterhole is hands down the second best thing to baiting for harvesting a black bear.

Black bear are like any other animal in that they need to consume food and water in order to survive. Bears will often frequent waterholes not only to quench their thirst, but for the occasional swim as well. On a number of occasions I have witnessed bears swimming and splashing in ponds. If you are hunting in a semi-arid area, finding a waterhole in bear country may be a sure bet in the quest to harvest a bear. In these areas, the temperature is typically hotter and everything is dryer. Bears seem to have to frequent water more often. Water sources can also be slim in these areas so if you locate a waterhole, you are probably sitting in a black bear gold mine. 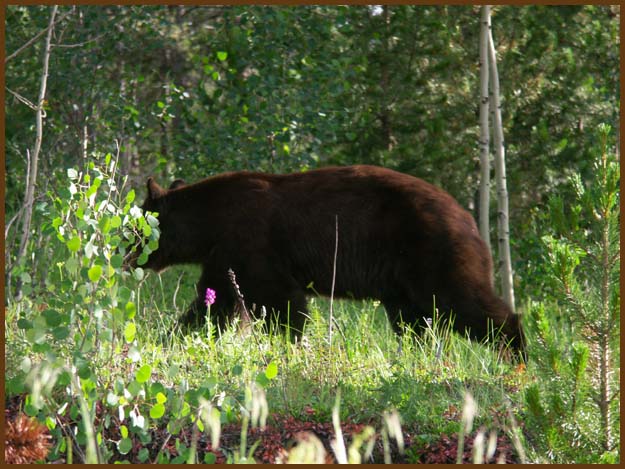 It doesn’t have to be arid country for a water source to work effectively though. Even in areas where it is wetter and cooler bear still drink. Elk wallows are not only a potential hot spot for elk, but they can be a ticket for seeing a bear. On numerous occasions I have either seen bears, or sign, at wallows in the thick timber out hunting elk.

Finding water located next to potential food sources can greatly increase the chances for an encounter. I once found a nice pocket of Gamble Oak brush where bears were gorging themselves on the acorns. I knew bears were in the area because of scat and tracks. The oak brush was so thick that it was impossible to locate a bear, let alone try to slip in and arrow one. As I checked the area out, I located a small waterhole a couple hundred yards downhill from the edge of the oak brush hillside. At 10:00 am, I decided to sit at the waterhole. I placed myself 25 yards from the waterhole and prepared for a long days sit. 15 minutes later I about choked when I caught a glimpse of a beautiful black bear making its way to the waterhole. Within minutes, the bear was at the waterhole and no clue I was there. 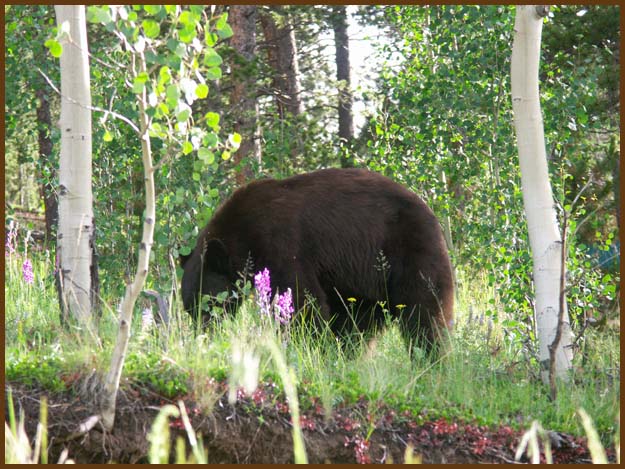 During the fall, bears really pack on the calories. They have to fatten up before the winter months hit so a feeding frenzy ensues. Bears fall slave to their strong noses, which lead them to potential food sources. During this time, bears will often find gut piles and carcasses a result of the big game hunting seasons. These gut piles offer a lot of grub for a bear; bunch of calories and a full stomach for days. Something they can’t pass up! Check first and make sure it is legal where you are hunting.

I cannot count the number of times I, or my friends have encountered bears on gut piles. Either stumbling upon gut piles with a bear on them in the woods in search of elk or deer, or sitting on a gut pile I knew about. I have a buddy who arrowed a mule deer for the sole purpose of trying to get a bear. He butchered the deer and packed out the meat. He returned the next day to sit on the gut pile and was happy to arrow a nice bear off of the deer. The bear ran a short ways before expiring. He skinned and butchered the bear and packed it out. His father also had a bear tag so they sat over the bear gut pile the following day and would you believe his father arrowed a bear.

Gut pile hunting can be key. Bear density is an important factor in this however. The situation with my buddy occurred in an area where there were a lot of bears obviously. In an area with less bears, hunting over a gut pile may not provide a bear. There is however, a very good chance, as bears are really cramming on the pounds at this time and are in search of food big time.

Whether you have found a prime waterhole that holds lots of bear sign, or you just butchered a mule deer in the heart of bear country and you have a bear tag in your pocket. Filling that bear tag is the next thing on the agenda. Placing a tree stand over the gut pile is great. Similar to hunting whitetails, the tree stand gets you up off the ground. It helps a bit in getting your scent off the ground as bears have amazing noses. It also helps to conceal you. If placing a tree stand, try placing it down wind of the gut pile or water source. Get ready for a bear to approach from the down wind side, but they can just appear out of nowhere.

Ground blinds can also work well at a water source or gut pile. Whether it be a homemade blind made from sticks and brush, or a portable blind. Blinds conceal movement and allow a better chance at a wary bear.

You don’t necessarily need to be totally concealed. Bears don’t have the best of eyes. Their noses are very very powerful however. So the nose is what you are going to want to be more concerned with. The encounter at the waterhole that I mentioned earlier, I was sitting out in open view of the bear. No real cover to speak of. The bear never did know I was there. Granted, I had the wind in my favor.

In states where baiting is illegal, hunting a waterhole or hunting over a fresh gut pile can greatly increase your odds of filling a bear tag. Bears are tough animals to locate, often nocturnal and seemingly like ghosts – species that I consider a tough one to get without the use of bait or dogs. But by utilizing a gut pile, or a bear’s water source, harvesting one of these neat creatures can be more possible than you think.