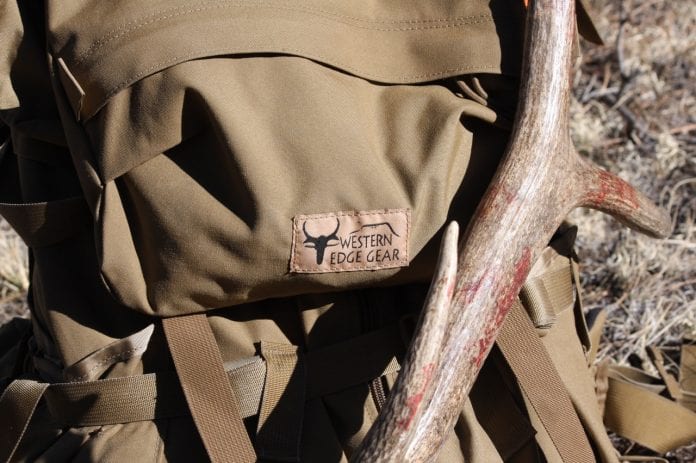 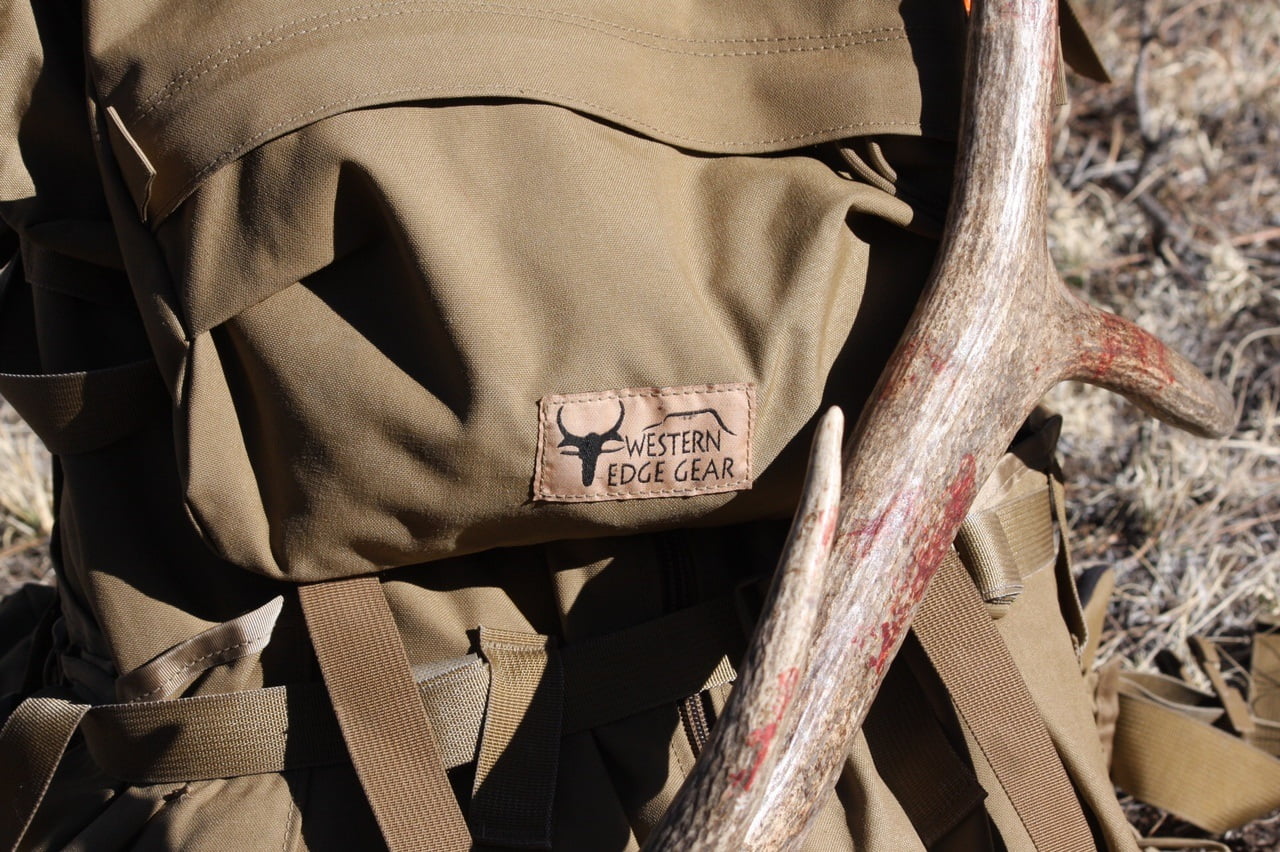 5 Hour Energy.  Toyota Tacoma.  Glock 26. Doug Flutie.  Sometimes big performance can come in a small package, and this is the case with Western Edge backpacks!

My kids had the opportunity to be test subjects for a season-long review of the Western Edge Bullion Butte backpack.  Over several months we experimented with fitment, did training hikes, tested all the accessories, and finished with my son using the backpack as a rear support when he shot his bull.  You get what you pay for, and in the case of Western Edge Backpacks, what you get is a versatile and high-quality backpack designed to improve the comfort and performance of your youth hunter.

Before testing the backpack, I talked to the man behind Western Edge, Steve Rude, to understand his thought process when designing a youth pack.  Steve mentioned three specific attributes of these backpacks: Adaptability, Durability, and Resale.  Simply put, he designed the pack to grow with your youth hunter, be durable enough to be handed down, and finally to sold to another youth hunter.  This is a man who understands his Rokslide audience!

The Western Edge backpack system consists of either 18 or 20-inch frames with a large or small waist belt, paired with either a 2760 cubic inch Bullion Butte bag (20” frame only) or the 1950 cubic inch Mud Butte Scrambler (18 or 20” frame).  By mixing and matching different bags, frame sizes, and belts you can find a combination that will fit the vast majority of youth hunters from seven years to teenagers.

The pack is robustly designed, with the same materials and craftsmanship that you would find on your own backpack.  At the risk of sounding cliché, the Western Edge frame and bags look and feel like a mini-Kifaru.  The design is very similar, using materials, frame stays, bag design, and a belt attachment reminiscent of a Kifaru, albeit not as hefty.  The frame and bag are covered in 500D Cordura, the belt and shoulder straps connect via hook-and-loop, and all the buckles and hardware look like they came right off my backpack.

The long-term durability of the Western Edge packs is a perfect segue into something that should speak to every Rokslider – reuse and resale.  As a father of four, I know that I can get one pack and cycle it through all my kids, over time spreading the investment across a decade or more in the field.  For those who will use the pack for a shorter period, Steve wanted to design a pack that was durable enough to be resold to another hunter. Knowing that the pack will last and you can recoup a significant portion of the cost is a major motivator in purchasing a youth-specific pack. 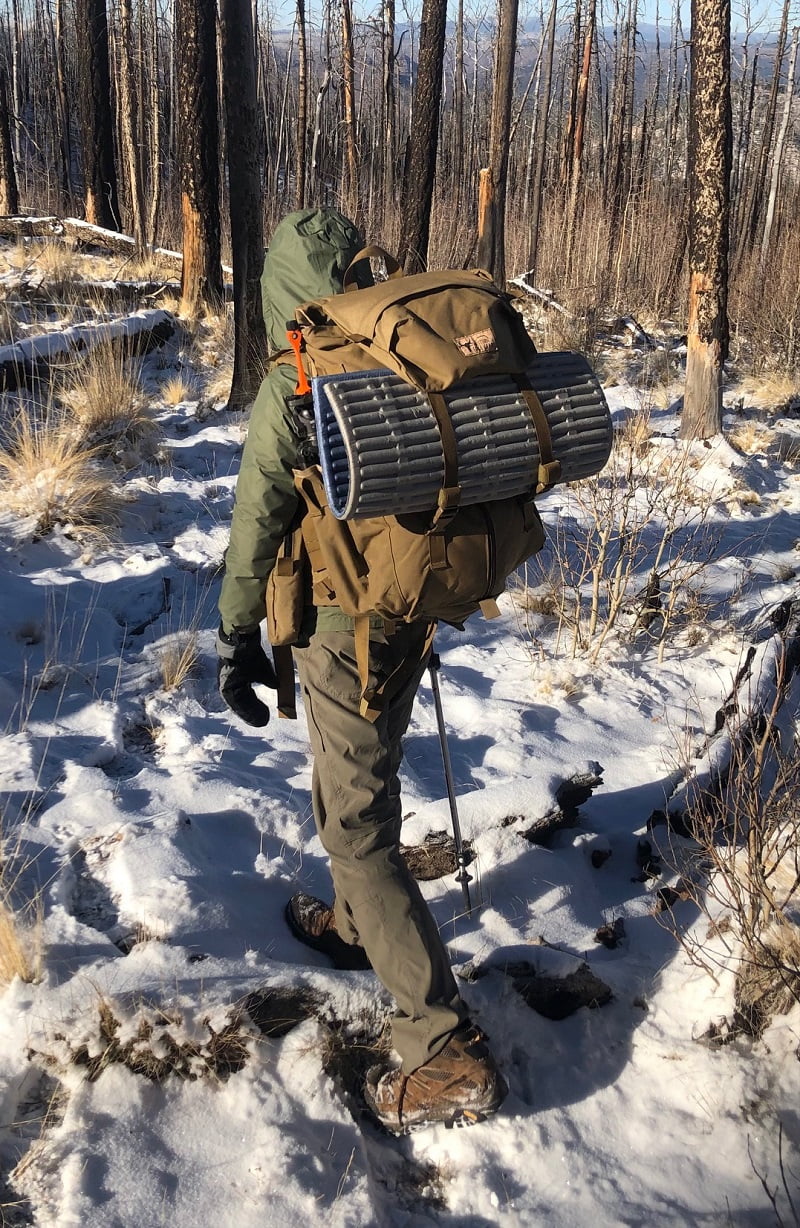 The pack weighed in at 4 pounds and 6 ounces using the 20” frame, Bullion Butte bag, and large belt with the water bottle and zipper pouch.  The 20” frame worked well for my 12-year-old son who is 59” tall with a 15” back, and my 10-year-old daughter who is 57” tall with a 14” back.  There was ample room to grow into the pack vertically, with several inches of frame height available for good load-lifter angles.

I estimate that you could comfortably use the 20-inch frame from 54” tall up to 66” before you run out of frame height.  I tried the 20” frame on my 49” tall 7-year-old daughter, and it was clear that she needed the 18” frame.  The frame projected up behind her head so she couldn’t look up, and her back was so short that I couldn’t sufficiently shorten the shoulder straps.

We tried both the large and small belts on waists measuring 22-24”.  My 12-year-old son used the large belt, but it was fully tightened down on his small 24” waist when there was more than a 20-pound load.  My 10-year-old daughter used the small belt, as she was just too skinny for the large.  Even my 7-year-old daughter was able to use the small belt with ease.  My best estimate is that the large belt will cover waist sizes from 24-32”, limited more by the padded section than the total belt length.  The small belt has a 3” shorter padded length and will accommodate waists from 20 – 28”.  Of note, the small belt is 4 inches wide compared to the 6-inch width of the large belt, the narrower width allowing smaller kids to bend without the belt digging into their ribs.

The frame is familiar, with a plastic sheet forming the backboard and two carbon-arrow stays providing rigidity.  There are attachment points on the frame stays for compression straps to cinch the bottom of the bag or attach gear under the bag.  Steve is also working on a dedicated load shelf that will attach to these points.

The Bullion Butte consists of a large main compartment accessed via a central vertical zipper or a large drawstring opening under the lid of the bag.  The lid is large enough to hold your quick-access items and was the most used part of the bag on the hunting trip.  The bag extends below the frame rather than above.  I ended up cinching the bottom portion of the bag so that it was even with the bottom of the frame, which made it easier for my son to sit without removing the pack.  Three compression straps run horizontally across the bag and PALS attachment points on the side of the bag.  There are also tacked-on strap keepers on the ends of all the bag straps, which help keep the webbing under control.  The sides of the pack have two vertical tube pockets good for holding trekking poles or a tripod. 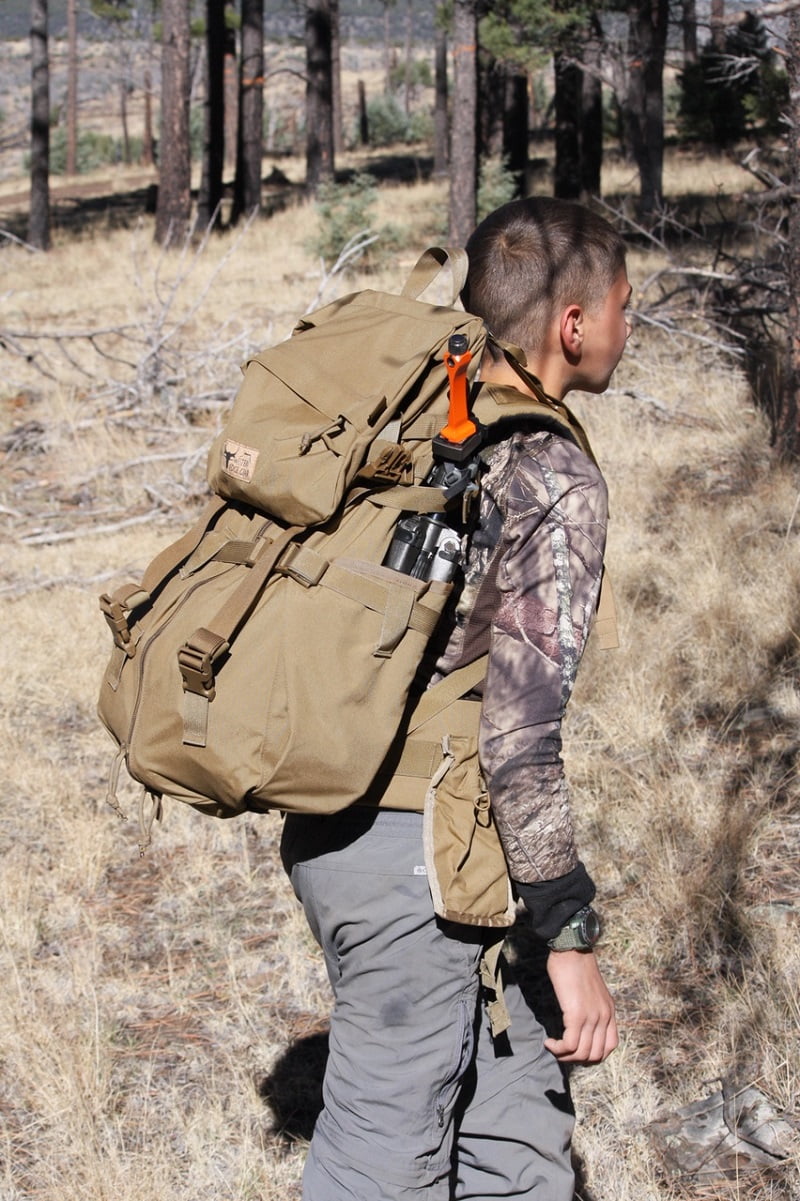 Included were a gun bearer, reversible orange panel pouch, water bottle holder, and zippered pouch.  I tested the gun bearer but never used it in the field.  It is designed to attach to the back of the bag, which puts the center of gravity far behind the hunter.  Although functional for heavier hunters, this required my skinny kids to lean far forward to counteract the pull of the rifle.  It also extends well below the bottom of the frame and wasn’t functional for all the deadfall we had to climb over.  To be sure, the rifle bearer will work for some, but not for others.

The panel pouch is reversible with coyote and blaze orange sides, and doubles as a load panel in a pinch.  It can be mounted to the outside of the bag or to the frame itself if you want to use it as a load panel, although it isn’t specifically designed for this.

The zippered pouch on the belt is spacious and functioned well, being used primarily for holding mittens and gloves on the elk hunt.  The water bottle holder was used once and never again after the first bushwhacking endeavor resulted in a lost water bottle.  The pocket is too shallow to fully secure a standard Nalgene bottle and needs to be deeper or incorporate a retaining device to keep the bottle from getting pushed out.

We put the pack through its paces on training hikes using a 25-pound sandbag and during a 4-day elk hunt.  My son, accustomed to using a ladies Kelty backpack, instantly fell in love with the new pack.  He specifically mentioned that it was more comfortable on the waist and didn’t slide or droop under load due to the large lumbar pad.

Given that this is a youth pack, it is important to keep in mind that the frame isn’t going to manage heavy loads like an adult pack.  The most I loaded the pack was about 40-50#, which was 2/3 of my son’s body weight – a very heavy relative weight!  The pack easily managed 50 pounds, but I could see that loading it beyond 60-70 pounds was going to be pushing the limits of the frame.  My son routinely carried the bag at 15 pounds and had no issues.  On the pack out, I loaded him up with his elk head and gear, estimated at 40 pounds total, and he raved about how comfortable it was.

The only issue I noticed was the inner padding of the shoulder strap would rotate inside the tube of outer strap fabric.  This only happened after we loaded up the elk head, and was not seen any other time.  Steve was already aware of the issue and has a redesigned prototype to fix the issue, which is primarily aesthetic and not a functional problem.

After the hunt, when asked about the pack and his thoughts, he burst out that it was “brilliant and amazing”!  When asked to elaborate, he mentioned how much more comfortable it was than other backpacks he had used. He said “it was nice to have all his gear easily accessible”.  I completely agree with his assessment!  The Western Edge packs are worth the investment. They will make your youth hunter more comfortable and effective in the field.

You can find out more about the Western Edge packs by visiting the extensive live-review thread here.