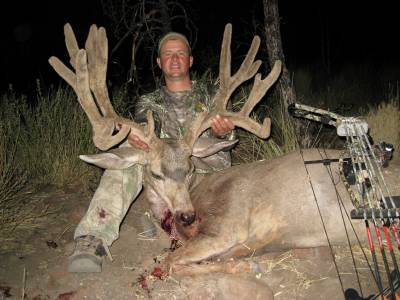 I can’t think of anyone in modern times who has taken more really big deer than Jason Carter of Utah.  I first came to know him through my outfitting business and since then have become friends.  Jason is the only mule deer hunter I know of who has killed three net non-typical B&C bucks, and one of those was with a bow!  He’s also taken dozens of other great bucks.  Jason worked as a hunt consultant for The Huntin’ Fool for fifteen years.   He hunts smart and hard all over the West.  After hearing that he was partnering up with Under Armour for a new Western hunting TV show, I called him to get caught up on everything.  Here’s a rare chance to hear how one of the best gets in done on big mule deer.

Robby: “You seem to be a died-in-the wool hunter.  How did you get into hunting and particularly big mule deer hunting?”

Jason: “Nearly everyone I know who was raised in the West grew up hunting Mule deer.  Harvesting a giant mule deer seemed to be the pinnacle of hunting achievements for local hunters.  I remember looking at magazines when I was a teenager and seeing photos of a few absolute giants.  I would daydream for hours about giant bucks!   It seemed absolutely impossible to see one let alone harvest one.  From the time of my first mule deer hunt, harvesting just a buck didn’t matter to me but rather a good buck.  I set a goal before my first hunt to never harvest less than a four-point buck during my hunting career.  I used to sit and visit with old time trophy mule deer hunters and learn all I could.  Everyone told me that the good days are gone and there are no longer any giants out there.  I refused to believe them.  There had to be a few that slipped through the cracks and were dying of old age.  I was bound and determined to find a few.”

Robby: “You are a family man with kids, right?”

Jason: “Yes, I am extremely blessed with a great wife and four great kids!  I try to incorporate my family when scouting and hunting as much as possible. Luckily for me, my entire family loves the outdoors.”

Robby: “You’ve killed some of the best bucks of our generation in multiple states on public land.  What are you doing to make this happen?”

Jason: “I believe that in order to harvest trophy bucks you have to hunt where deer have a chance to live to be six to nine years old.  I love to hunt desert areas for a number of reasons.  These areas usually have very low deer densities and as a result, game and fish departments generally don’t really know the population sizes in these areas and usually issue a very conservative number of tags.  This results in light hunting pressure. Generally speaking, hunters in these areas struggle to keep a positive attitude and their enthusiasm to hunt hard wanes when they aren’t seeing good numbers of deer.  All of this helps maintain a decent percentage of older bucks in the population.  I also try to hunt areas that I can obtain a tag and hunt year after year; for the most part, bucks don’t just disappear.  I have been fortunate to hunt several bucks year after year until I was finally able to seal the deal. 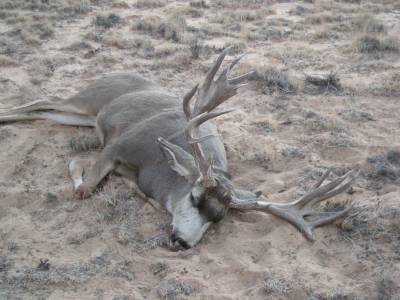 “I also try to adapt if I am hunting different states and seasons.  For example, if I am hunting the rut in Colorado, I know it’s a numbers game.  From daylight to dark, I try to glass up as many bucks as possible.  If a buck isn’t a giant, I don’t waste even five extra seconds looking at him.  The more time I waste, the fewer bucks I will find.  After a week of relentless “covering the numbers” and hunting where other hunters aren’t willing to, chances are you will find a big deer.  When you do, you have to make it happen, right then, while you know exactly where he is.

“These are just my personal thoughts. Everyone is different. There are plenty of successful hunters that may employ different strategies. You have to do what you think provides you the best chance at harvesting a big buck and your strategies may be very different from location to location.

Robby:  “Seems from everything I’ve read, your big deer have mostly come on DIY/public land hunts?”

Jason: “Yes, although I am not against guided hunts.  I have a lot of theories on this subject but for now let’s settle on the fact that it may take 20-50 days of scouting (even if it’s before and after work) and hunting an entire season to harvest a 220″+ buck and that’s just not feasible when booking a hunt.

Robby: “So are guided hunts part of your strategy?”

Jason: “If that’s what it takes to hunt a particular area or secure a particular tag, then sure.  I hunt Mexico and thus have to go guided…but I try to control as many of the variables in hunting as possible even when going guided.  Only one of my 200″ bucks came from a guided hunt and it was on an Indian Reservation. I told my guide that I wanted to hunt where nobody else ever hunts. We didn’t see very many deer but we hunted deer that don’t get hunted.”

Robby: “As far as size goes, what do you think is the hardest North American Big Game trophy to come by?”

Jason: “A net B&C Mule deer is probably the hardest but having said that, I have an extreme amount of respect for any B&C animal and the effort that goes into harvesting it.”

Robby: “What tips would you give us Roksliders if we want to take a giant buck?”

Jason: “That is an interesting question. I hope to keep up the enthusiasm and continue to hunt the Western U.S. with a vengeance!  I am addicted to hunting giant mule deer and I hope that never changes!  Every buck is unique and I want one of them all!!”

Robby: “I read that you’re partnering up with Under Armour to produce a new TV show.  Tell us about it?”

Jason: “I approached the executives at Under Armour about supporting a possible TV show that I was interested in creating.  Long story short, they were looking at doing one as well and at the end of the day we teamed up.  It will feature mostly Western hunts including Canada, Alaska, and Mexico.”

Robby: “When/where does it air?”

Jason: “Ridge Reaper will air on the Outdoor Channel starting July 1st at 9:00 pm MST.  We will have 13 original episodes airing throughout the 4th quarter of this year.”

Robby:  “Thanks Jason and I look forward to seeing you with your next giant mule deer.” 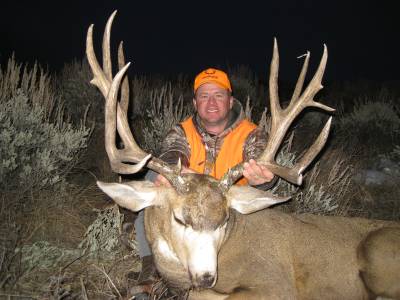