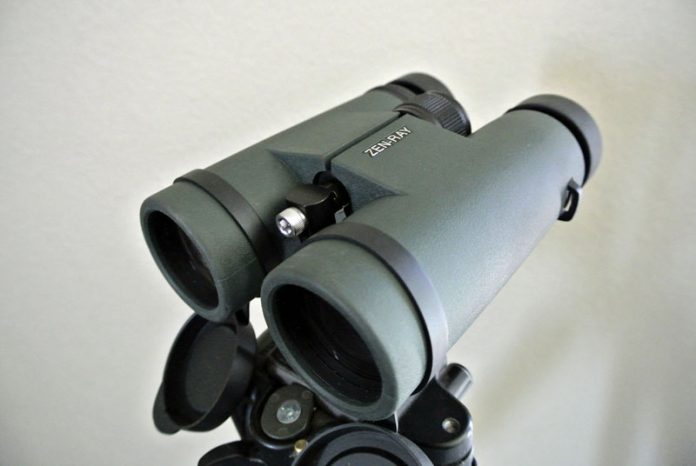 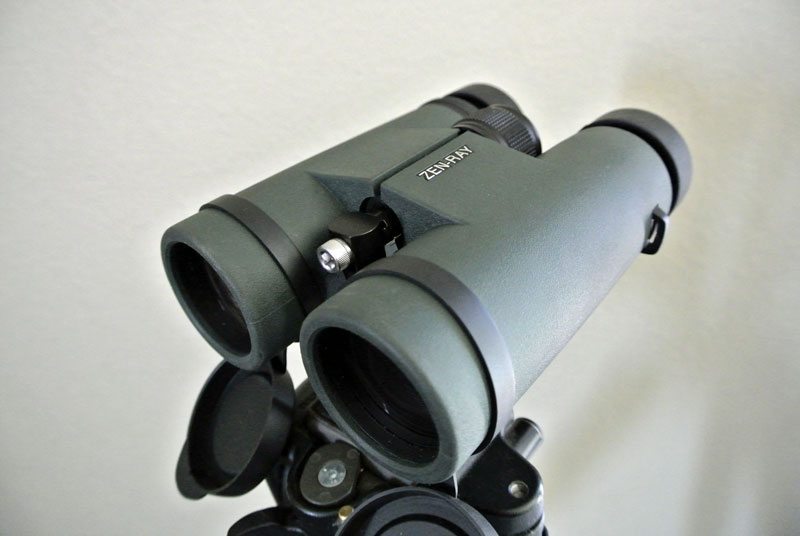 For the past few seasons I have been using what I consider the benchmark of hunting binoculars: The Swarovski SLC neu in 10×42. It is the most recent refinement of the time-tested SLC design which has been helping tags get punched for decades. This binocular is a roof-prism design that incorporates the newest technologies like dialectric prism coatings, but lacks ED (extra-low dispersion) objectives. The newest SLC HD binocular is a totally new design that does incorporate ED objectives.

The SLC neu has a lot going for it, and more than just brand prestige. The image has low levels of distortion, low levels of centerfield chromatic aberration(CA), visible but minor CA at the edges, and other aberrations are very well controlled. The “sweet spot” of the image is quite large with the edge blurring being very mild. The depth of field is extremely deep and makes for a very comfortable viewing experience. The binocular is built like it was made for paratroopers. The rubber armoring is pleasant to feel, and has just the right amount of purchase wet or dry. Eye relief is adequate at 15mm, and the field of view is a picture-window like 330 feet at 1000 yards. All-in-all it is a fine binocular, and field worthy in every way. I have compared it next to many binoculars new and old, and have yet to find one (even brand new super-binoculars) that really stands out from it in any category … except value. The 10×42 SLC neu has always sold for well over $1000 new, and even now discontinued and used specimens still go for over a grand. Still, the Swarovski SLC neu remains the binocular I compare all others to.

I also have the Zen Ray ED2 in 10X43, and have compared it to the SLC neu. Zen Ray is a Portland area optic distributor that utilizes Chinese production to offer high quality optics at low prices. The ED2 handily beats the SLC in value, given the image quality of the ED2 is biting at the heels of the SLC neu, and even outperforms it in CA control. Where the SLC neu readily distances itself from the ED2 is in build quality. Everything about the Swarovski is dripping with quality craftsmanship and durability. The ED2 is not poorly built, but has less attractive armor, lower quality plastics, and a generally lower level of fit and finish.

Recently Zen Ray has made a push for the top with their new Prime HD binocular. The Prime HD was rumored to compete with the European binoculars in build quality especially, and I was excited to take a look at them. When preparing for an Alaskan Moose Hunt, I was lucky to hear from Charles at Zen Ray that he would be sending me the 10X42 Primes to evaluate during my hunt. Over the course of the hunt myself and both of my hunting partners on the trip spent hours behind them, picking apart alder thickets and tundra expanses for Alces alces. We also had a couple pairs of Swarovski SLCs to compare them to.

The result was a good idea of how we felt about the binocular. 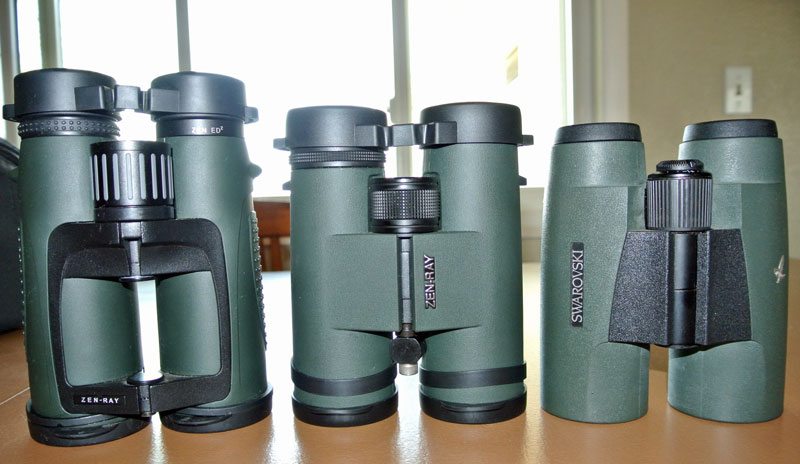 First off, the binocular is well built. In fact, this binocular raises the build quality bar of Chinese optics to a whole new level. Everything fit well and was finished as a precision instrument should be. The rubber armor looked and felt like the SLC neu’s armor. The diopter adjusted easily, but stayed put. The only issue I had (and my partners agreed) was the eyecups seemed a little out of place. They were wider than I would like, and maintained the somewhat “Chinese-bin” shape. Still, They worked fine, and everybody was able to get them to fit for their inter-pupilary distance (IPD). The secondary effect of the eyecup design was that side-light would come in and introduce glare to the ocular lenses. This binocular would easily benefit from some sort of eye shield. 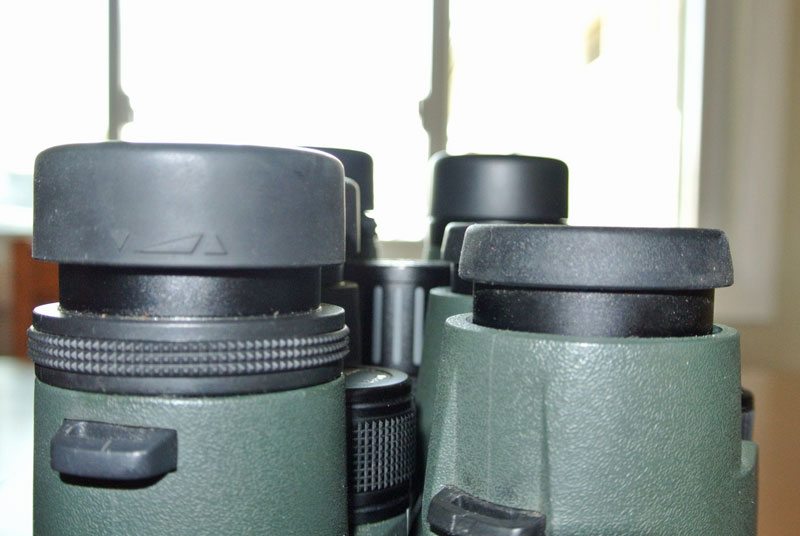 It comes as no surprise that the Prime performs very, very well for its price. The image has just the slightest bit of pincushion distortion. It was so flat, in fact, that I occasionally noticed some “rolling ball” effect when panning, but not so much that I saw it all the time, or even that it was particularly distracting when I did notice it. The resolution capabilities of the binocular are very good, and the centerfield was comparable to the SLC. Similarly, centerfield CA control was very good. I was a little surprised that the SLC neu actually controlled CA better throughout the view, since the ED2 controlled it so well, and the Prime uses extra-low dispersion glass specifically to control this aberration (and the SLC neu does not). Still this was the only real optical slip up, and it wasn’t “poor” by any means. Contrast and color saturation were both very good in this binocular. The depth of field was a bit shallower than the SLC neu, and we all noticed when using the Prime it took more time on the focus wheel than the SLC neu when in the field. The Prime shows a very small amount of blurring at the very edge; it is nearly sharp. Edge performance is very good. In very low light, the SLC neu provided a slightly brighter view, but not by much.

Optically, the Zen Ray Prime provides a sharp, wide, flat, and colorful field of view to the hunter. 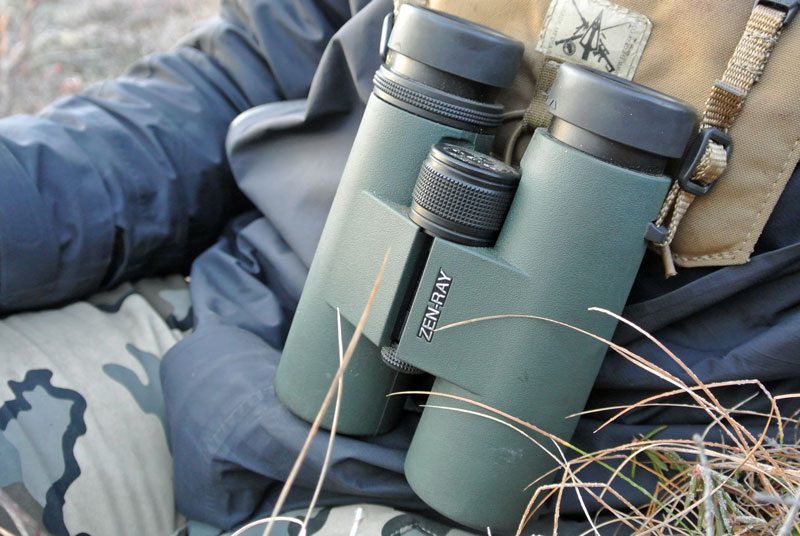 The Zen Ray Prime is the finest Chinese-manufactured binocular I have seen. The build quality of the binocular took a huge jump over previous offerings. Optical quality, while not quite up to the more expensive Austrian Swarovski SLC neu, wasn’t far behind either. The Zen Ray Prime offers a great value, and has closed the gap even further between mid-priced binoculars and the “Euros.”

Battle of the Big Eyes