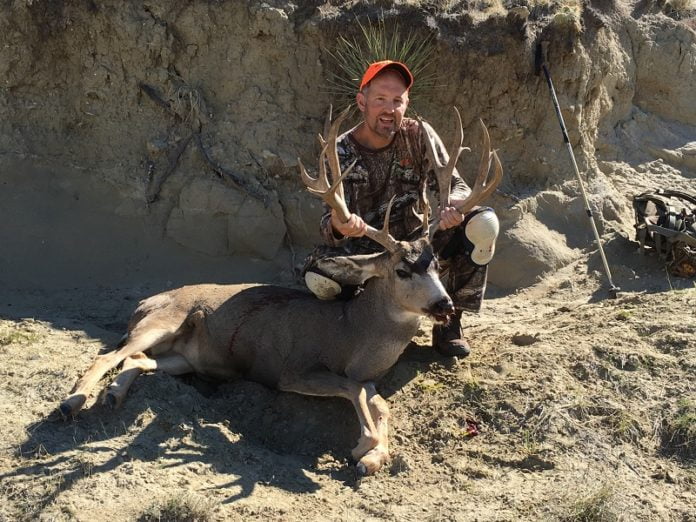 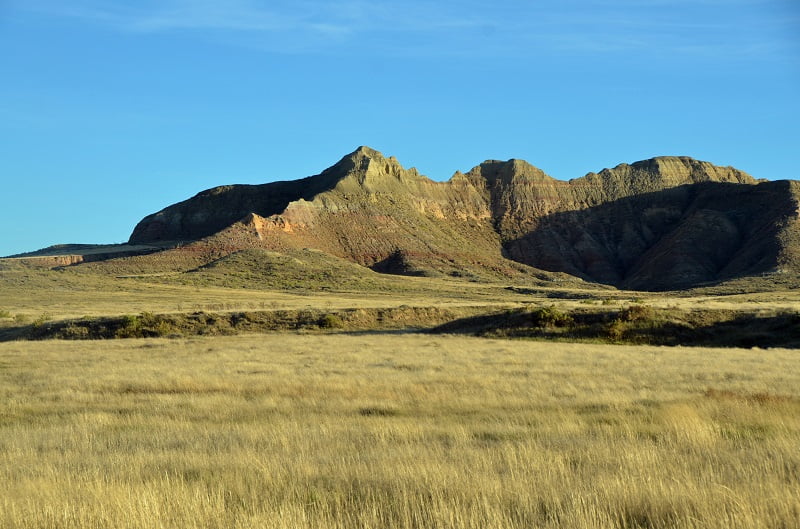 I crawled slowly up the ridge, trying my best to avoid the cactus clusters littering my path.  My goal was a small shelf, slightly larger than a dining room table. Nearing the lip of the ridge, I could hear my hunting partner Dan whispering behind me, reminding me to go slow.

Reaching the shelf, I inched towards the far side, where a small rim of rock provided about two feet of cover for my prone body. Slowly, I raised my binoculars and began scanning a draw across the valley. After a minute of glassing and some panic, I saw him. Resting under a shaded ledge, sheltered from the midday Wyoming heat, was the mule deer I had seen four long hours earlier.

“Do you see him?” Dan whispered.

My wide eyes were his answer. Without a word Dan handed me his rifle and crawled up onto the ledge.

“It’s 260 yards,” Dan whispered, squinting through a rangefinder. “Are you going to wait for him to get up or take a shot at him bedded?” 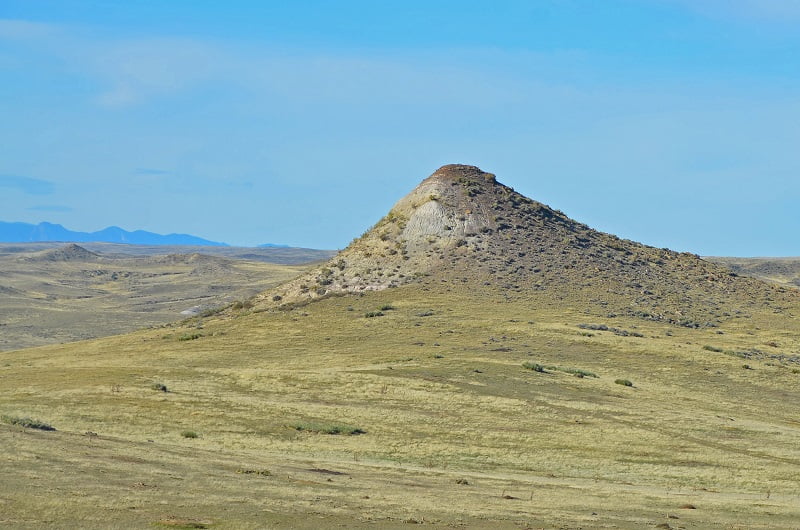 Before I answered, I briefly thought about the chain of events that landed me 2000 miles from home, roosting on a thin ledge within rifle range of the largest deer I had ever seen.

The adventure started over a year ago when my friend John returned home from a summer trip out west. Before a meeting of our Ducks Unlimited chapter, John came up to me with an announcement.

“We are going hunting out West to Wyoming next fall,” he said. “Anyone that is interested in going, let me know.” 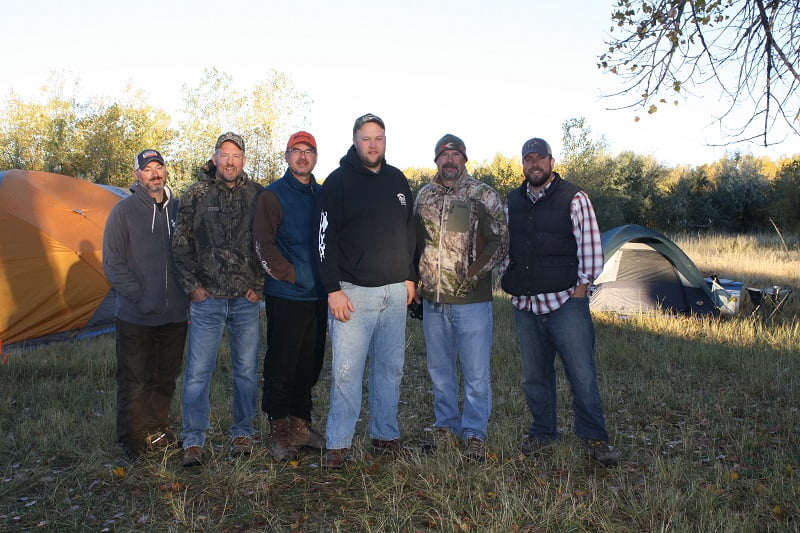 Within months, five of us from the chapter had committed. After making some calls, John gained permission for us to hunt a large cattle ranch in a remote section of Northeast Wyoming. With a plan in motion, we gathered one evening at the gun club to discuss logistics. Our focus would be mule deer and antelope.

Because Wyoming allows groups to apply for a party license, we purchased our preference points and filled out the necessary paper work. Weeks later, an email from Wyoming Game and Fish confirmed our hopes. We would be heading West. 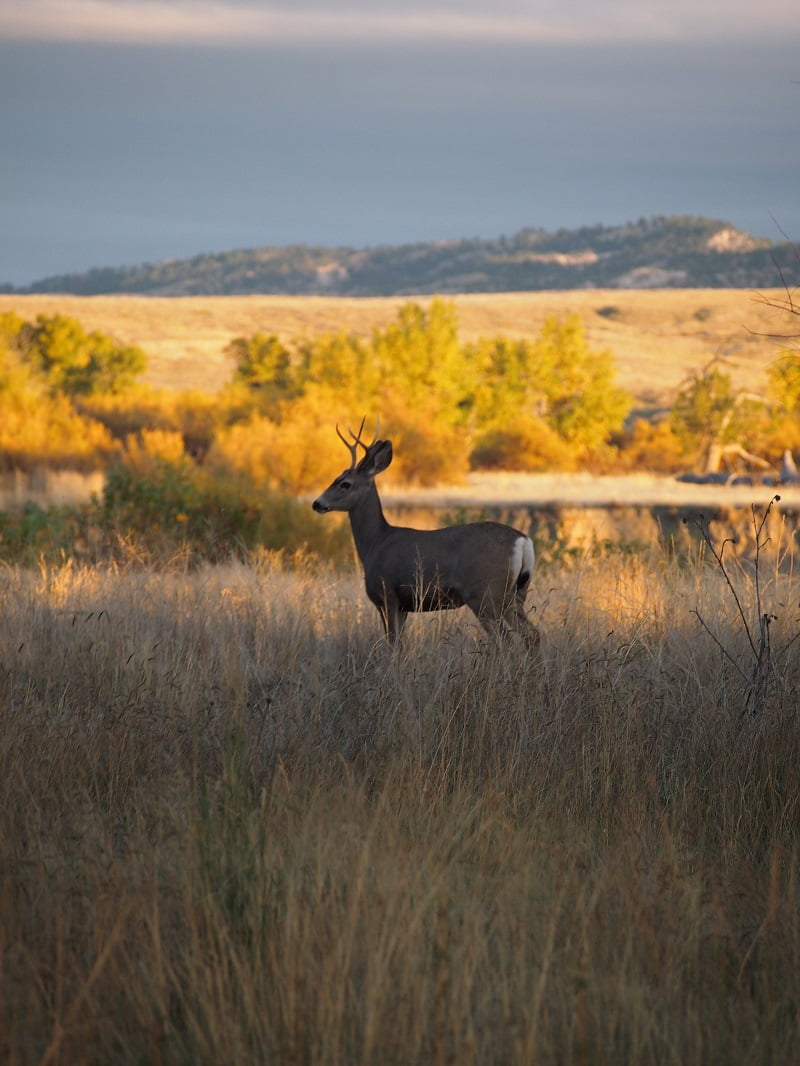 Our plan was to make the 2000-mile ride from Maryland with trucks, trailers, ATVS, tents, and all the supplies we would need for eight days of hunting. After 28 hours of almost nonstop driving we reached the ranch, two days before opening day. Passing through the rusty metal gate, we were swallowed by miles of grass plains stretching to distant mountains. Ridges, coulees, and dry riverbeds etched the landscape. 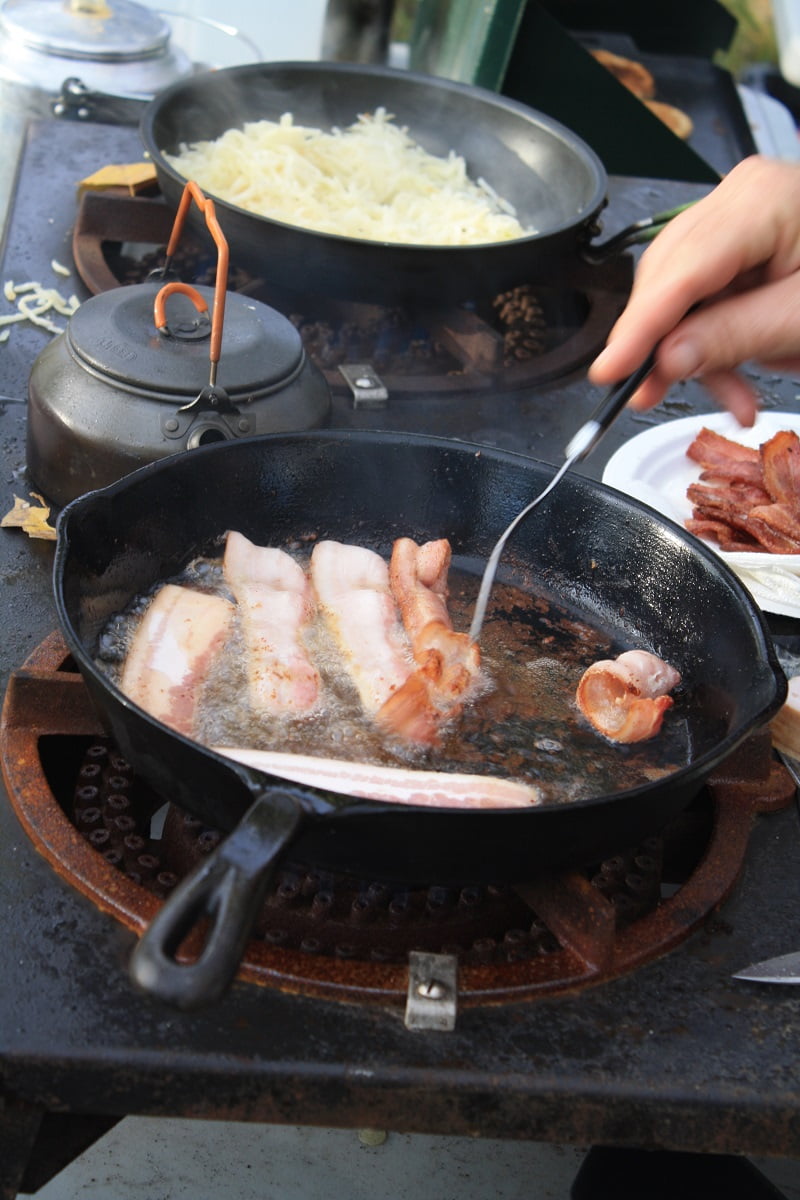 We set up camp in a meadow, 100 yards from a river, with a ring of cottonwoods offering shade from the early October sun.  With the camp in order, we spent the next day and half driving the property, armed with maps, GPS’, and spotting scopes; trying to get a lay of the land. The diversity of wildlife was spectacular, from turkey and ducks to antelope, mule deer, elk – and the largest porcupine any of us had ever seen. 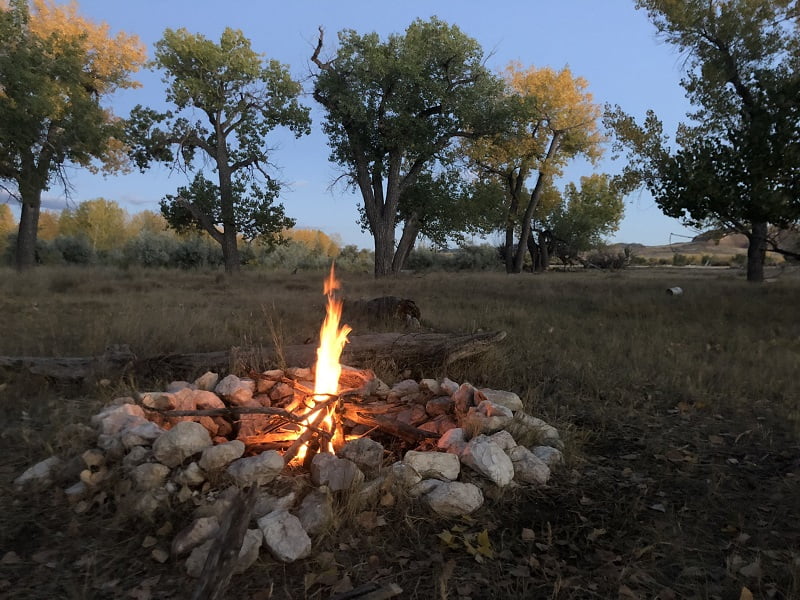 The evening before opening day found us bathed in the light of the campfire, formulating a plan for the morning. For some in our group, this was their first big game hunt, while others had been lifelong hunters. We decided to split into two groups of three for the morning hunt, go to opposite ends of the ranch, and concentrate on antelope.

In the pre-dawn darkness I headed east with my friends Dan and Joe to a spot where we had seen some good-sized antelope the day before. Since this was Joe’s first big game hunt, Dan and I both agreed that he would be first up. 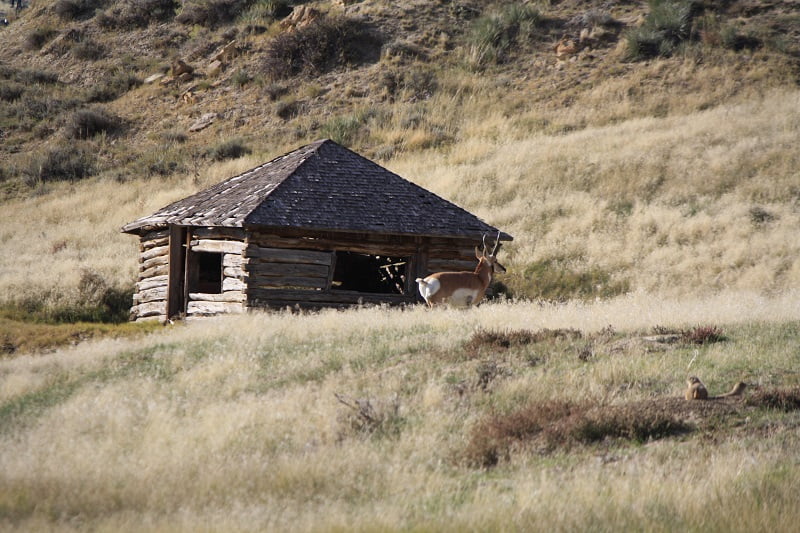 Over the next few hours we glassed and stalked two different antelope bucks, trying to get Joe in position for a shot, but both times the antelope had other plans.  Convening on the open grasslands, we decided to try our luck a little further west.

Bouncing over a rutted two track lane on our way to the new spot, I looked to my left and noticed some movement. In the late morning sun I caught a glimpse of what looked like antler. Lots of antler.

“Stop the truck!” I sputtered. “I just saw a big mule deer!”

Dan hit the brakes hard. “Where?” he asked.

“Up there on the left,” I said, “Underneath that ledge with the shade, about 100 yards below the top of the ridge.”

Instantly, three sets of binoculars were scanning the distant ridge.

The next 15 minutes crept by as we stayed in the truck, watching the buck grow even larger through our binoculars and spotting scope. 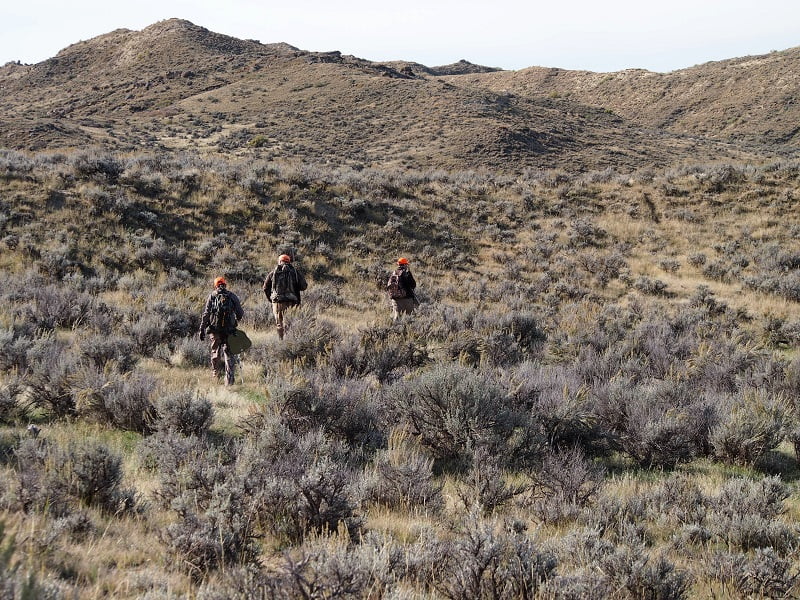 “Let’s back out of here and figure out a plan” Dan said, slipping the truck into neutral and drifting silently out of sight of the bedded muley.

Unfolding the map and studying the terrain, we formed a game plan. From his vantage, the giant muley has a clear view across the valley in front of him, and the ledge he is bedded under protects him from overhead. But we do have one advantage. It is now almost 10 a.m. and getting hot. Unless something spooks him, he is not leaving the cool shade of the ledge.

Our plan places Joe to the right of the road, covering the valley in case the buck bolts. Dan and I will drive a mile down the road and climb the hills just east of the bedded buck, the wind in our faces. Even if it all holds together, it could take a few hours to get into position. 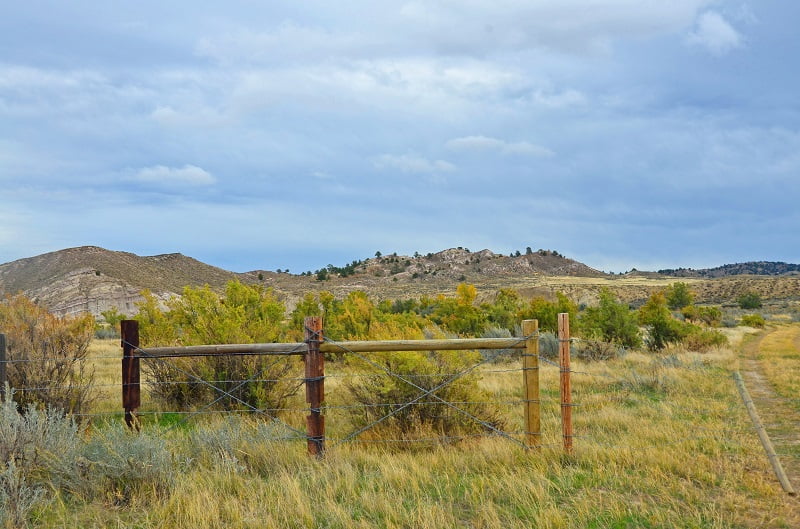 Moving quickly now, Dan and I park the truck, don our packs, and pick a mental path up the scrubby hillside.  But just steps from the truck, a metallic rattle stops us both in our tracks. Glancing down at my rifle, my heart sinks. One of the scope bases has come loose – a first for me in more than 25 years of hunting. It is a total disaster at the worst possible moment.

Mid-stalk on the largest deer I have ever seen is not the time to protest. We set off again, and spend the next three hours inching in and out of ravines and scaling barbed wire beneath a relentless Wyoming sun.

Red faced and dusty, we reach the top of the hill overlooking the bedded buck. Peering through the scrub brush, we scan for the massive muley, our hearts racing. Nothing.

Dan checks his GPS, and hisses.

“We went a ridge too far,” he whispers. “Let’s slide back down and try that ridge – that should be the one we want.”

Reversing course, we work our way back, hoping we haven’t spooked the buck. Scanning the ridge to the west, I finally spot a familiar landmark amid a sea of scrub and soil: a single large boulder. That’s the boulder I used to mark the buck, I tell Dan. I’m sure of it.

Laying prone, we each fish out our binoculars. And there he is. Adjusting the focus, I can see him, still in his bed, resting upright on all fours. His head moves slowly, scanning the valley before him, covered in shade from the midday sun. I nod to Dan, who hands me his rifle. We are in position on a shelf, 260 yards from the deer. I ease out my shooting sticks to steady the rifle.

“Are you going to wait for him to get up or take a shot at him bedded?” Dan whispers.

Its decision time, but I know already I’m not waiting for him to stand up. A shift in the wind, or one stray coyote, and the hunt could be over without a shot. I steady the cross hairs of the big .338 and squeeze the trigger. At the shot, the rifle jumps off the sticks. Quickly, I get the scope back on him.

As the big buck struggles to rise from his bed, I touch off a second shot, and the big buck goes down for good. 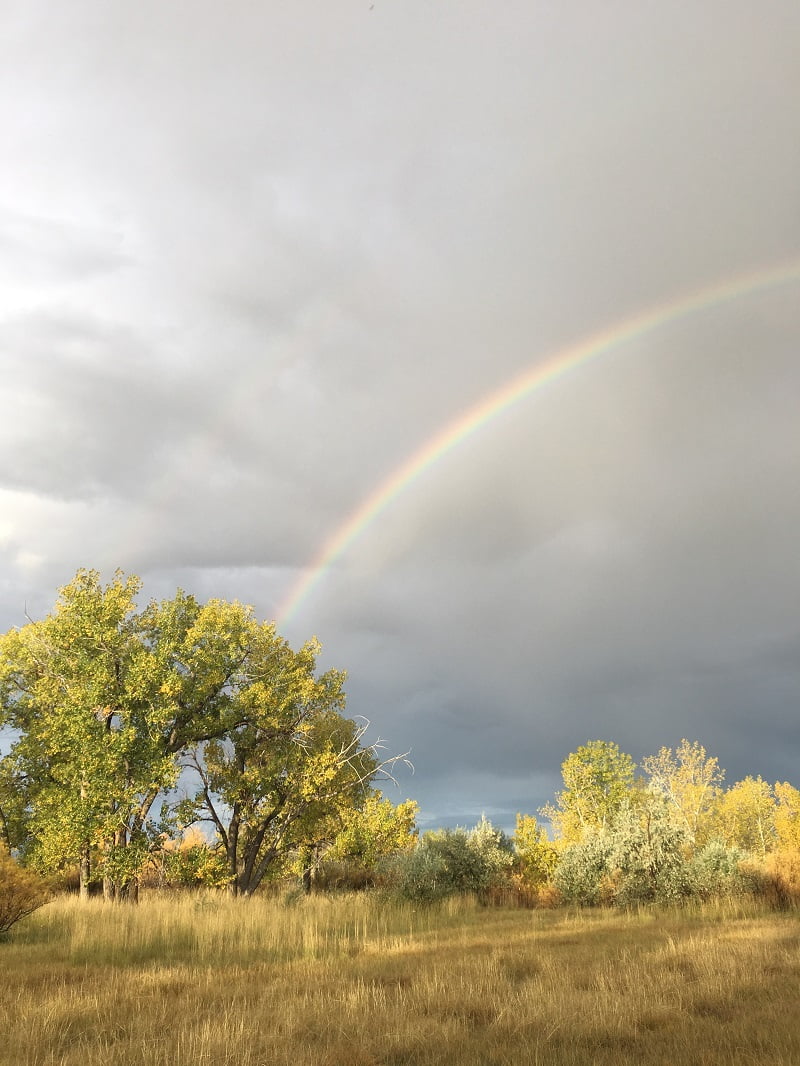 With the tension of the last hours suddenly lifted, we explode into smiles. After a wild high five, Dan and I gather our gear and race from the ridge. Approaching the downed buck, I am amazed I was able spot the deer, make a stalk, and take him with a borrowed rifle while he was bedded. How it all came together is nothing short of amazing.

Dan reaches the deer first and calls to me.

“He looks like a Christmas tree,” Dan shouts, smiling broadly.

I walk up the buck, grip his chocolate antlers and start counting.  I glance at Dan to make sure I have counted correctly. “Yep,” his smile says – 17 points. 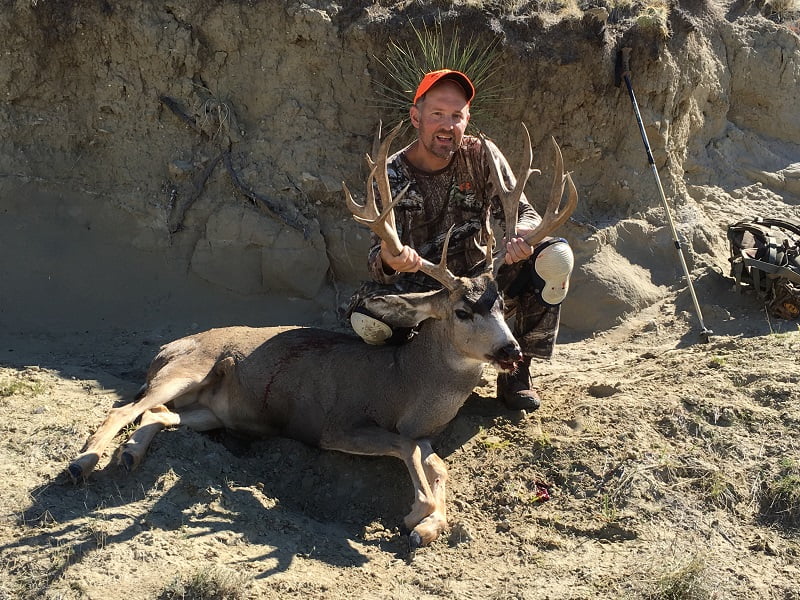 The Name of the Game

Mystics Of The Hunt