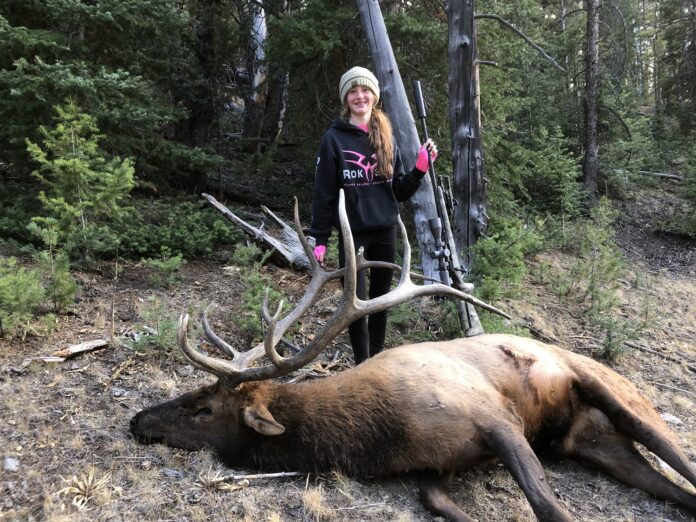 Hello! I am Annabelle Carr. This hunt I’m about to tell you about took place in 2021, when I was 13 years old. I have been in the mountains since before I could walk, and I have been hunting since I turned 10. I have shot four elk (well five if you count the one I will talk about in a second.) My Dad, Jim Carr, is an amazing hunter whom I look up to. But definitely, he can be really annoying at times because he is always pushing me to go harder. I was excited to go on my elk hunt. Our good friend Ryan Avery was coming along with pack goats. I can miss a limited amount of time at the charter school I attend, so we only had a few days to hunt.

One Day Before Elk Opener

My dad headed to the area a couple of days earlier to scout. We live in the same town as Ryan, so brought me to the hunting area. We had a planned area we would hunt on opening day. We arrived late and started up the mountain with the goats to our planned camp first thing in the morning. We hoped to find some good elk on the way and locate a shooter bull before dark. Little did we know my dad was trying to get a hold of us all morning to let us know he found several good bulls in a different part of the unit. But he never got a hold of us. 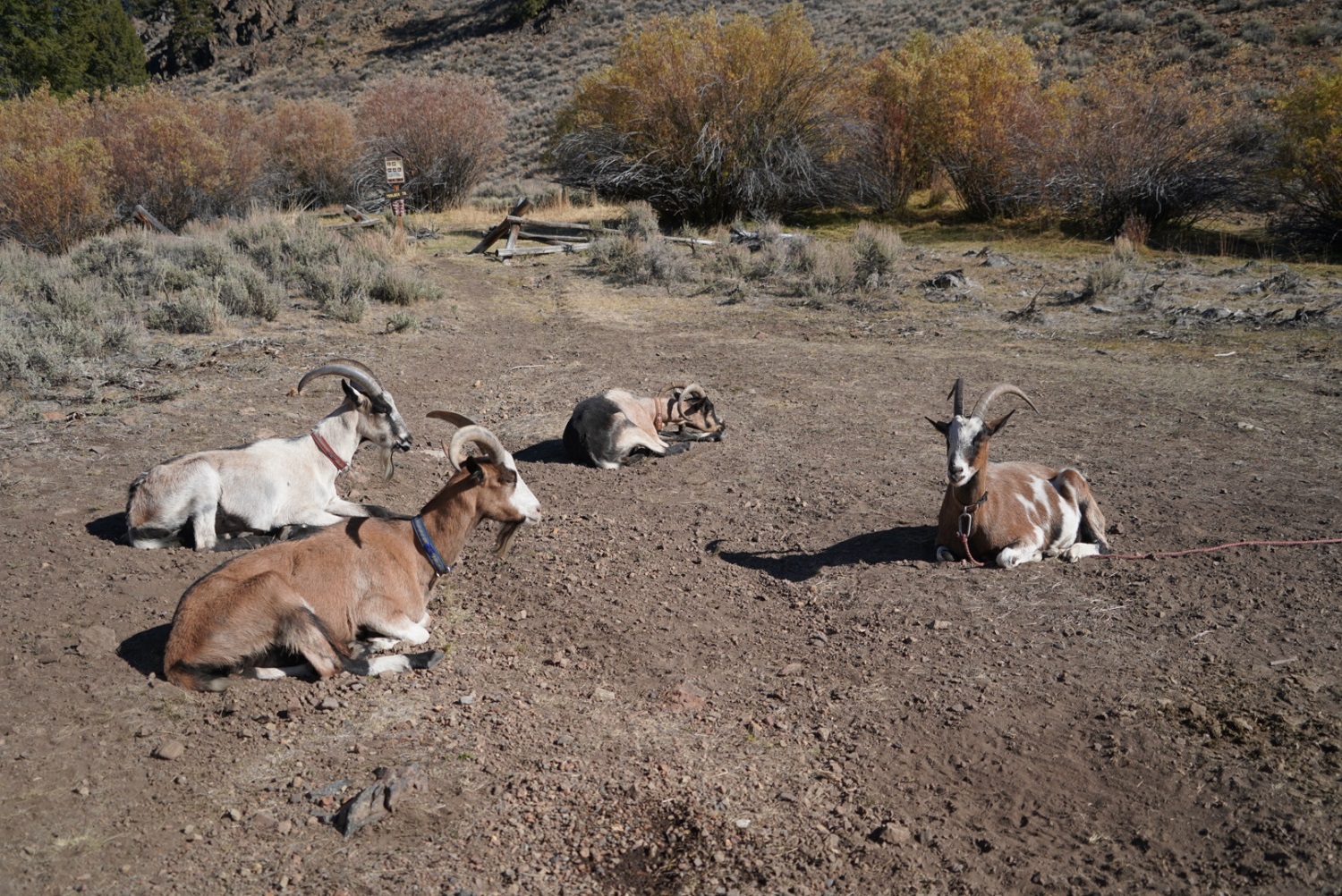 We would hike for a while, then scout and look to see if we could spot any elk. There was not much of anything, but I had hoped that we would find something at the top. Finally, we reached the top and the spot where we had agreed to meet my dad. We sat down our packs, fed the goats, and decided to do some scouting before dark. We glassed and found some elk, but they were way too far away, and they most likely would not be there the next morning. Although there were a few elk, none of them caught my eye. And I didn’t think it would be worth going after them on opening morning.

Night Before the Elk Opener

We headed back to the spot where we would camp and waited for my dad. Eventually, my dad reached the top of the mountain after the sun had gone down. My dad had explained that he saw a couple of shooter bulls, and he had been trying to get a hold of us, and we said we hadn’t seen any good bulls up here. So, we had to make a decision before opening morning. He said the bulls were from 5 to 7 miles in and an hour’s drive.  After contemplating what we should do, we decided that my dad and I would hike out that night and go up to a different spot. Ryan would stay to see what he could find in the morning.

So we put on our packs and took off. It was already pitch black, windy, and cold. We were also already tired from the full day of hiking. We knew we probably wouldn’t get off the mountain until late at night. My flashlight was not doing so well, and my dad was in such a hurry to catch us; he only had a dim flashlight. The way down was NOT easy because my dad took a shortcut route up through rocks and cliffs. Because it was pitch black, we could not really see where we were going very well. We found our way onto steep cliffs. As we tried to make our way down the jagged, steep rocks, my heart just pounded because I was scared that one of us would take the wrong step and it wouldn’t end well.

After getting through the cliffs, I thought we finally made it, but that was just part one of the awful rest of the night. I was so happy to get off the mountain safely, but my dad said we were not even close to the quad. I did not anticipate it being that hard. So, we kept walking and walking, and then we got to the quad.

At that point, I was so tired I thought I could just close my eyes as my dad drove the quad to the truck. but that’s not what happened. My dad had lost the key in his hurry and eventually started it using a paper clip. The lights weren’t working, and there were several skid roads that turned into nothing. The path was very rocky. So rocky that we knew we were going the wrong way. We turned around, and the quad died in the middle of nowhere. At that point, I was cold, hungry, and worn out.

We kept trying to start the quad, and after a long time of trying to start it up, we finally got it. So, we kept looking for the truck and found ourselves getting lost because my dad’s flashlight was very dim, and we kept driving off into the sagebrush. After what felt like forever, we came up to our truck just after 2 a.m. We were so tired. I got in his truck and slept for a little while. My dad got ready and drove to the other spot. My rest came to an abrupt end as we arrived at our parking spot. Dad woke me up and said we have to go now.

We started hiking, and we kept going with no stops. We didn’t go on a trail. We went straight up, which was not unusual for me because we did that all the time, but I was so tired. We hiked and hiked. We made it to the first spot right as it started to get light. It was opening morning and things were serious because we knew that when we heard a shot, we might be out of time. We snuck around, and my dad saw a herd of elk, so I got excited. My dad found one of the shooters. We had to work our way a little closer and right when we were getting set up for a shot, an outfitter with a couple of hunters on horses rode over the ridge and pushed them down the side of the mountain. Luckily, they did not see the elk.

Then we heard a beautiful bugle in the bottom of the canyon in the trees. We kept on hearing the bull, which we knew was a big one. We decided to quietly work our way across the mountain to get a better look over the canyon. We could not see the bull anywhere. We glassed all morning, and it seemed like we wouldn’t see anything. All of a sudden, we heard another bugle. But this bugle was not an elk bugle. It was a hunter in the canyon. Then we heard loud talking from the canyon.

My Dad knew that those elk were going to come right out of this side of the canyon, so we quickly got up and moved to a ledge and set up the rifle. Sure enough, the elk came running out of the canyon. It had to be a quick and accurate shot. I got down, and my dad said I needed to make sure I shot the big one. So, I looked at the running elk and looked for the big bull. I found him right as he slowed and came to a quick stop before heading over the ridge. I immediately took the shot, and the bull stumbled but then headed back toward us. So, I reloaded and took another shot right before he went into the trees.

We went to go look for blood, and after several hours, no luck. Not a drop of blood. We followed every track we could see. We were both worn out, and I broke down and cried. We walked back up to the hill I shot from. We stopped and prayed to our Heavenly Father. My Dad looked toward where I had shot. Thinking of any way the bull could have gone and said he would go check one more time even though it seemed hopeless.

I sat there in the wind, praying that we would find this beautiful bull. After a long time, I thought it was hopeless until, from a long distance, my dad screamed that he had found my elk! I started jumping with joy. I literally had my own little party. My Dad came back up from the canyon, and he said he thought he saw it but was probably seeing things. At that point, I was in tears, and then my dad said he was joking, and I was so happy.

He said he looked at the last spot he thought the bull had been, but found nothing. As he walked back up to me, he prayed that the bull would have run the way he was taking back to me. He thought he was hallucinating when he found the bull wrapped up around a tree. He ended up only being 100 yards from when we last saw him. He just went in a totally different direction than we saw him last, with no tracks across the rocks. 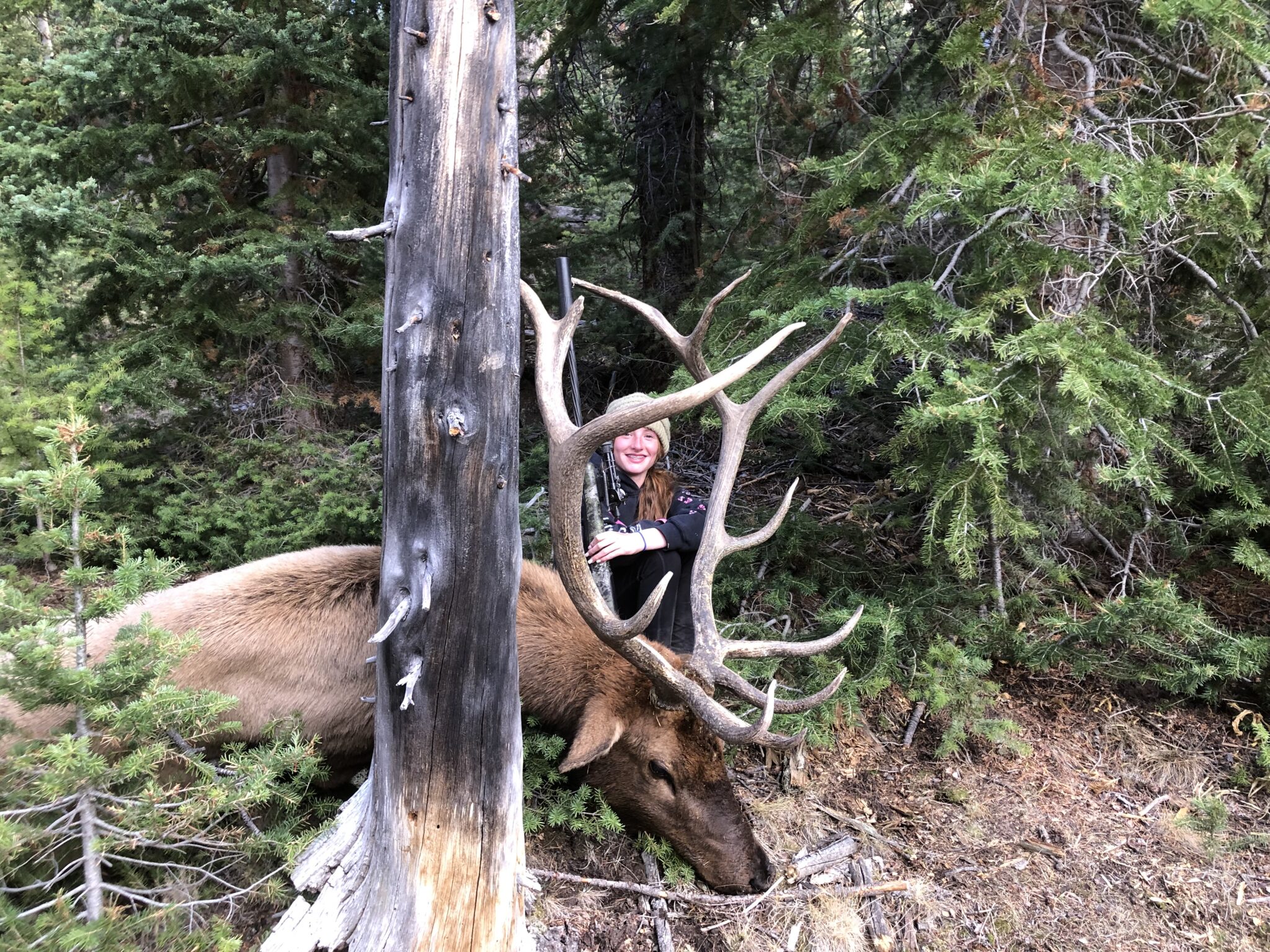 We grabbed our packs and started heading down to the bull. I knew that he was the one we heard bugling in the canyon earlier that morning. We started to field dress the elk, and my dad was trying to let Ryan know I got something so he could bring the goats to help us pack it out. A little after dark, Ryan showed up with his goats which was a miracle. We would not have been able to make it in one trip if it were not for Ryan and his goats.

We finished getting everything put in bags on the goats, which took a while. Once we were all ready, we started hiking out. It was already pitch black outside, and we just kept on hiking. We did not realize how long it would take to get out. Finally, at 4 am, we made it to the truck. I was so tired we went to sleep. 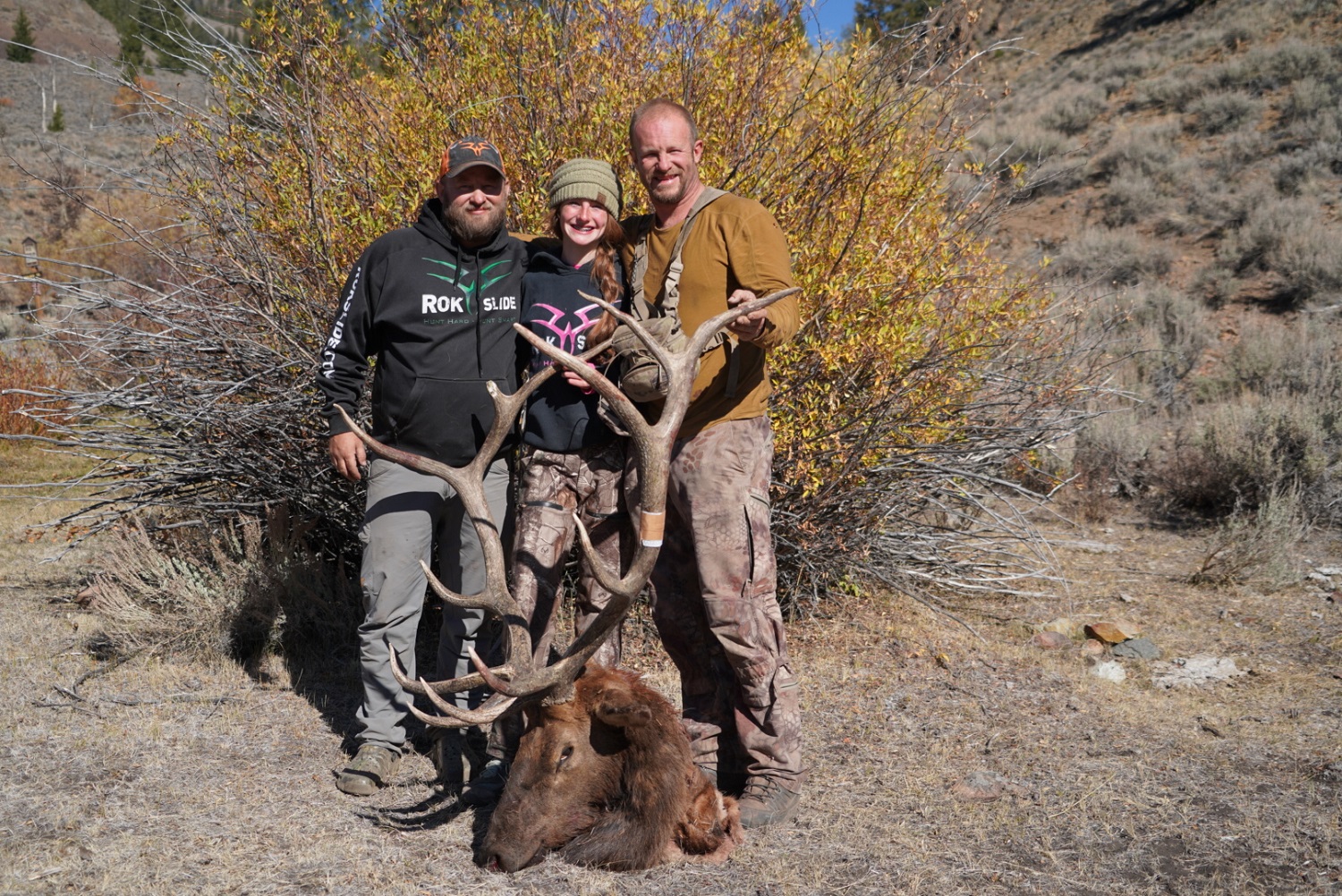 The next morning, I slept and slept. We packed up the truck and helped Ryan pack up the goats. And we were off for home with my bull.