Matt is back with his final installment on the Classic Hunters.  He spent a fall hunting multiple species and has a complete terminal performance report for us. I’ve also paired up with Berger Bullets to make sure three Rok Blog subscribers get a box of the new Classic Hunters.  Take it away Matt. 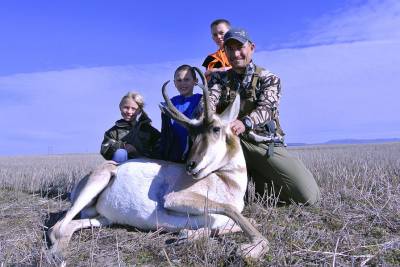 Part one of my Berger Classic Hunter test demonstrated the bullet’s easy-to-load and accurate design.   Yet the question remained:  What is the terminal performance?  Terminal performance refers to what the bullet does to the animal upon impact.  In the case of a hunting bullet, the goal is a quick and clean kill.  In order to have good terminal performance a bullet needs to be able to penetrate to the vital organs, and then sufficiently damage the vital tissue to result in a quick kill.

With tags in my pocket, I ventured into the prairies and mountains of Montana to find out.  My first opportunity came on the windswept flat country of north-central MT.  I had the kids along, as antelope hunting is a great family hunt with frequent stalks and a warm truck never too far away.

After a couple of nearly successful stalks with my oldest in tow, I found myself belly down on the stubble watching some black horns bobbing their way towards me over a low rise.  I ranged the buck at around 400 yards, but do to the extremely flat terrain, he cut the distance to 260 yards before he offered a head-on throat patch shot.  I put the crosshairs right on the white throat patch.  It was easy to be confident with the impressive accuracy the Classic Hunters had shown me in load development.

BOOM … WHOP.  The sound of the hit came back and I could see legs in the air.  I approached the buck and found a tiny entrance hole and large exit wound several inches wide out the back of the neck.  The small entrance wound was difficult to find.  The bullet penetrated almost three inches before fragmenting, where it plowed a large wound channel.  The channel damaged some neck meat and a portion of one backstrap.  I would have preferred to place the shot a little higher and have the wound channel go into the air above the back, or lower and have the channel penetrate into the chest cavity. 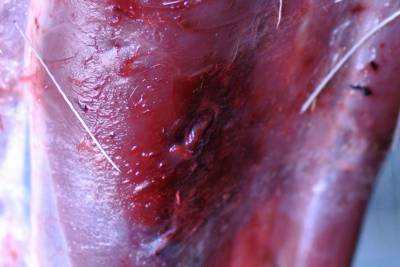 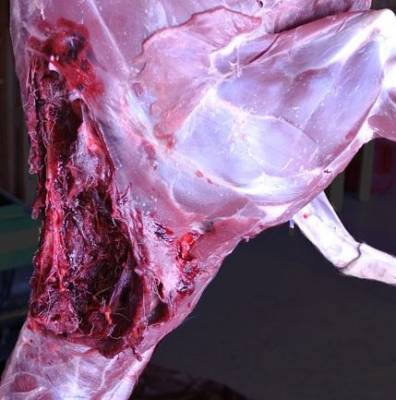 Fast forward to November and I was hunting elk in the late season snow.  We had ridden horseback into a wilderness area in Western MT and tracked a herd of about 40 cows and calves to the border of the hunting district.  We sneaked to a shooting position across the drainage from the herd.  I set up and picked out a fat cow at 311 yards and waited.  Soon she fed into a shooting lane.  I rested my crosshairs high on the shoulder, hoping to keep her from running to the neighboring district.  In a millisecond, I heard the reassuring sound of a hit echoing behind the report of the Savage.  The cow tried to run up the hill with the herd at the shot, but she only made it a few leaps before sliding down the snowy slope, leaving a bright crimson trail. 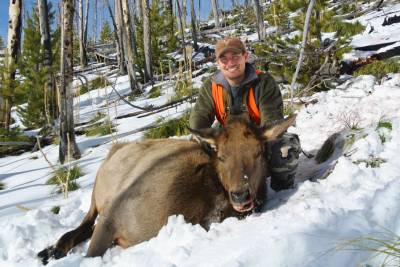 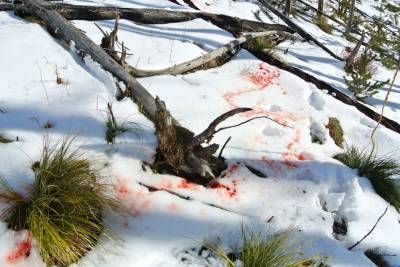 Upon inspection, the bullet penetrated the on-side scapula, leaving a neat caliber-sized hole in the bone.  The bullet then fragmented violently, with the wound channel destroying the lung tissue before leaving an exit wound through the ribs on the far side.  Loops of streaming blood spread across the snow.

Meat damage was very little around the tiny entrance hole.  There was some bloodshot meat around the exit, including some in the off-side shoulder from bullet fragments.  There was quite a bit of blood that collected between the hide and the ribs.  Initially I thought this was additional bloodshot meat, but after de-boning it was apparent that much of the bleeding occurred in the connective tissues on top of the meat, and not within the meat itself. 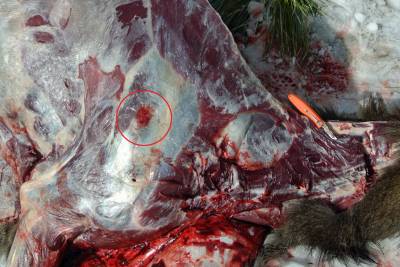 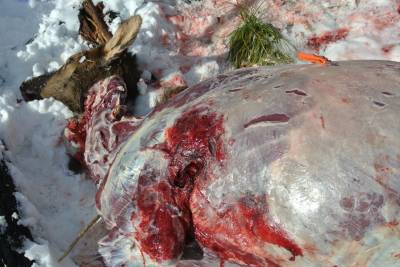 Two kills is obviously not a large sample size, but the bullets performed very similarly on two very different targets and angles.  This performance is very similar to kills I have had with Berger Hunting VLD bullets, the predecessor to the Classic Hunter design.  That is, the bullets maintain their structural integrity for several inches upon impact before expanding violently and causes massive tissue damage in a large wound channel, resulting in quick kills.  Depending on shot placement, there is some cost in lost meat if this wound channel passes through an area of quality cuts.  On broadside targets, the bulk of the damage is inflicted on the vital organs.  Considering this effective killing performance with their awesome accuracy, exterior ballistic performance, and easy loading, I think Berger has a real winner in the Berger Classic Hunter.

So Rok Blog subscribers, the generous folks at Berger Bullets ponied up not one, not two, but three boxes of Classic Hunters for me to giveaway to three seperate winners!  The odds of winning will be great.  If you’d like to get a box of Berger Classic Hunters in the caliber of your choice, just take the next four steps for a chance to win:

1) If you’re not already a Rok Blog subscriber (be sure), go to top of page under Fitness/Other links, right hand side, and click “Subscribe to blog”

4) Finally, post up in the Rok Blog comments section below the caliber you’d choose and what rifle you’ll be shooting (use first and last name).

You have to complete all four steps to win.   Trust me, many people rush through the entry process, miss steps, and aren’t eligible to win.  So pay attention!

I’ll conduct the drawing on Tuesday, April 8th.  Watch your email for winner notification.  Due to popular demand and caliber choice, there may be a significant delay in shipping your bullets.