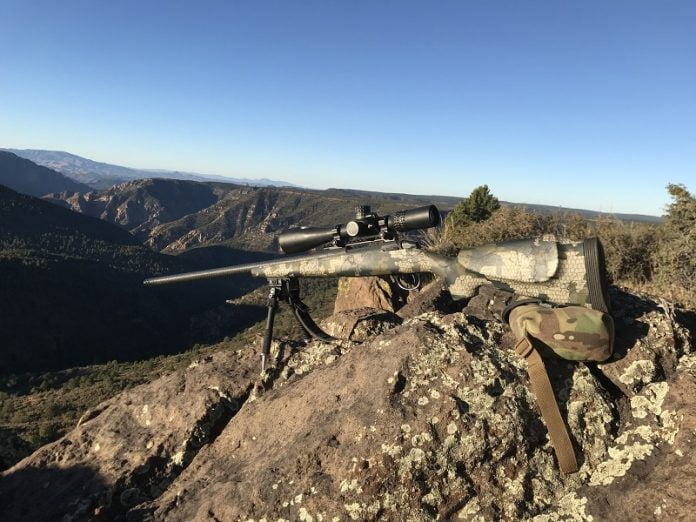 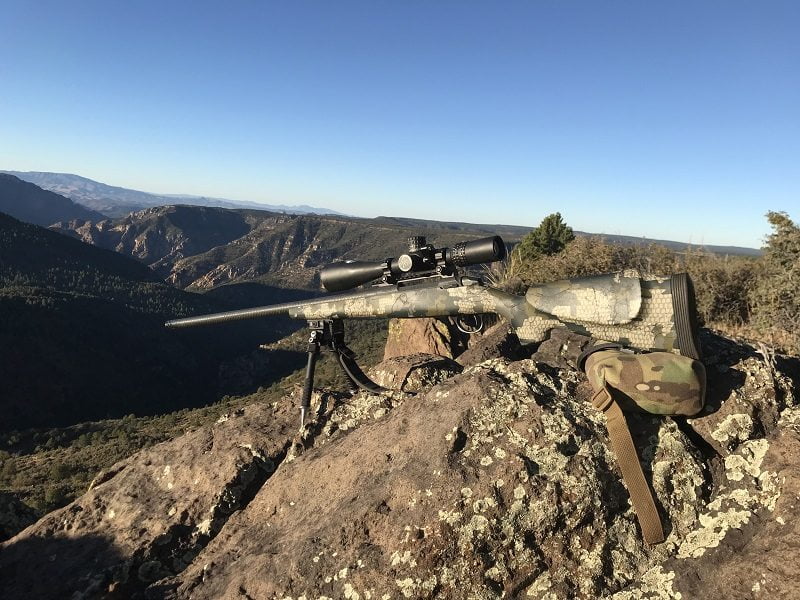 After looking at the Fierce Edge off and on for a few years and finding little to no feedback available online, I decided to give the guys at Fierce a call to ask some questions. The discussion led to the purchase of a CT Edge chambered in 30 Nosler. I have been gradually trying lighter and lighter rifles to find my threshold for a lightweight long-range hunter. With a 0.5 MOA guarantee, I didn’t really see where I could go wrong.  The wait for the rifle was around double what was quoted, which is unacceptable in my opinion. Fortunately, a variety of vendors carry Fierce rifles chambered in many different cartridges and in many different configurations. There are many options available from Fierce ranging from the base model Fury to the CT Edge, which I will be focusing on.

The advertised weights range form 5.8lbs on the CT Edge to 7.2lbs on the Fury Long Range.  My CT Edge hit the scales at 6.5lbs, which is quite a bit over the advertised rating, but still a very lightweight rifle setup for long range shooting.  The only thing I can come up with is that they might leave the detachable box magazine out for the weight rating. I ordered mine as a package with a Picatinny rail and Nightforce rings holding a Nightforce NXS 5.5-22×50. It arrived in a Boyt hard case that I have since come to prefer over my Pelicans.

Fierce rifles are built around their own action, which is essentially a Sako 85 clone. Many have concerns with this, stating they are just overpriced Sakos. I do not understand this as almost all custom actions are Remington clones and by that logic, they are just overpriced Remingtons. I can assure you these actions are amongst the best actions available and I will make a case for them being better than most.  They are a three lug design with a Sako-style extractor.  They are what I would call a controlled round push feed but Fierce calls it a controlled round feed. 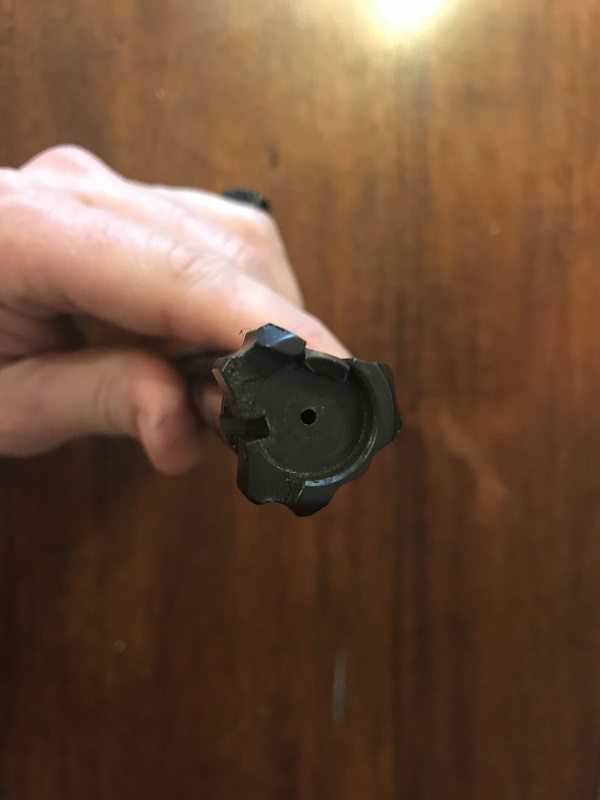 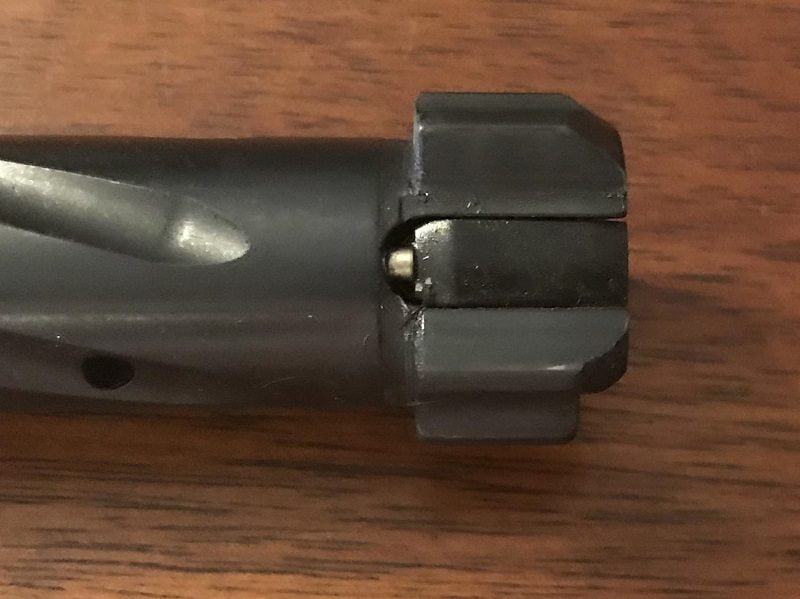 As the bolt is closed, the opening at the bottom of the bolt face allows the round to slide up into the bolt face from the magazine and the round is captured as it slides into battery. It differs slightly from a true controlled round feed action (such as a Mauser or pre-64 Model 70) in that it does not have the giant claw to hold the cartridge against the bolt face. It also allows single loading without first placing the cartridge in the magazine. The couple hundred rounds I have cycled through it indicate that it is far better at smoothly getting a round into the chamber than any 700 clones I have cycled.

The Fierce action uses a mechanical ejector. I was unsure how I would feel about this. I have used mechanical ejectors before but only on varmint rigs. After using it for a very short time, I came to realize the advantages. The first and most noticeable is the fact that there is no plunger trying to cock the cartridge to the side as a round is being chambered. The lack of the plunger aids in the cartridge sliding freely into the chamber. It also makes closing the bolt noticeably easier, so much so that I am not sure I ever want to go back to a plunger ejector. The second less important advantage is it gives you more control over the ejection. If you are doing load development and do not want to fling brass across the bench, it is slightly easier to just pull the bolt back a little less and grab the cartridge from the loading port. If you are hunting and need a follow-up shot, just cycle like normal and the brass exits the port with authority. 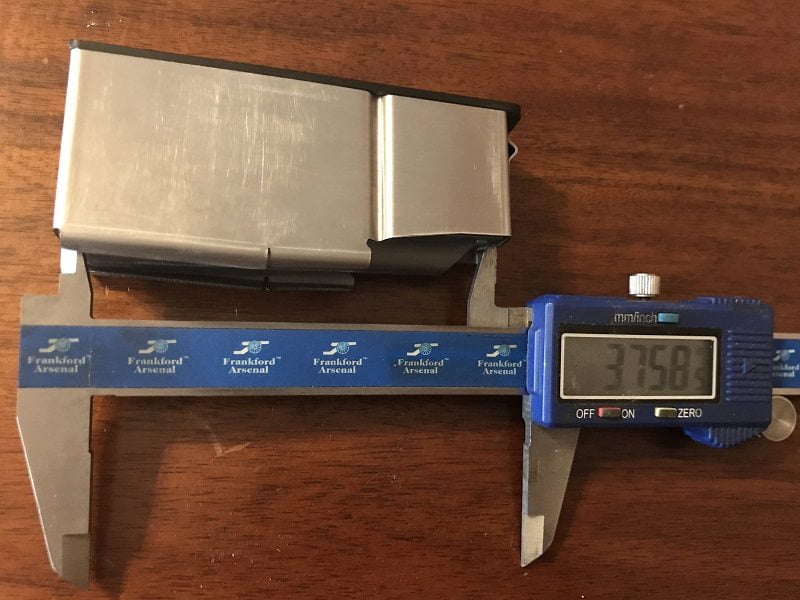 I am generally not a huge fan of the detachable box magazine due to the weight they usually add but this one is very well designed and only weighs 5oz, which, in combination with the bottom metal, is only an ounce or two more than a comparable hinged floor plate setup from someone like Hawkins. This magazine allows loading five magnum cartridges, four down and one in the chamber while providing adequate space for seating longer bullets in cartridges such as the 28 Nosler, 30 Nosler, and 300 Winchester Magnum.

The action uses a side bolt release and the bolt can be easily disassembled in seconds, using a tool, which is provided. 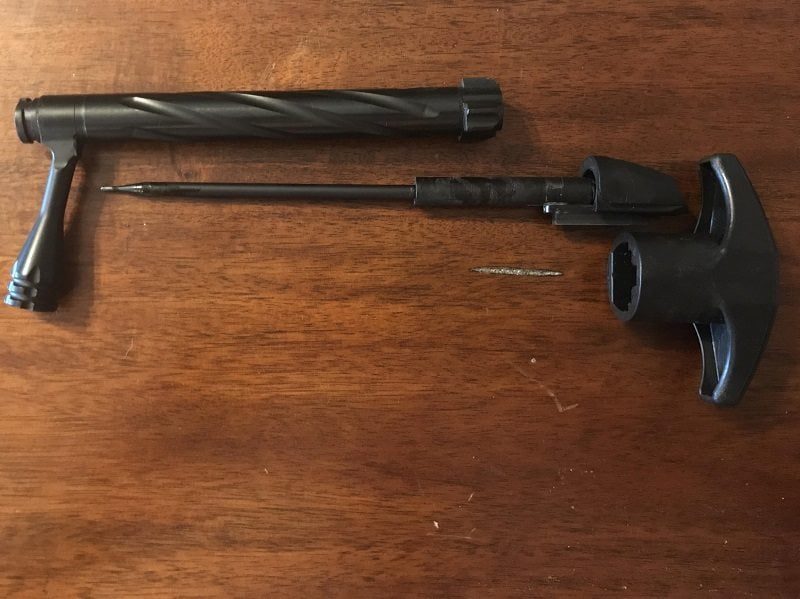 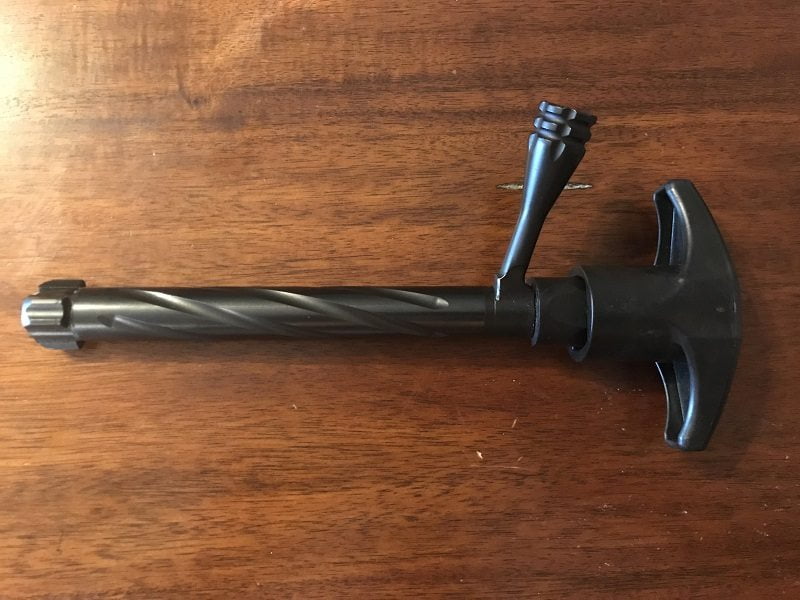 Fierce offers two options for scope rings and bases. You can get a Talley quick detachable setup up or go the route I did with a rail. If you do not like those options, you can use any Remington 700 bases with 8-40 screws. 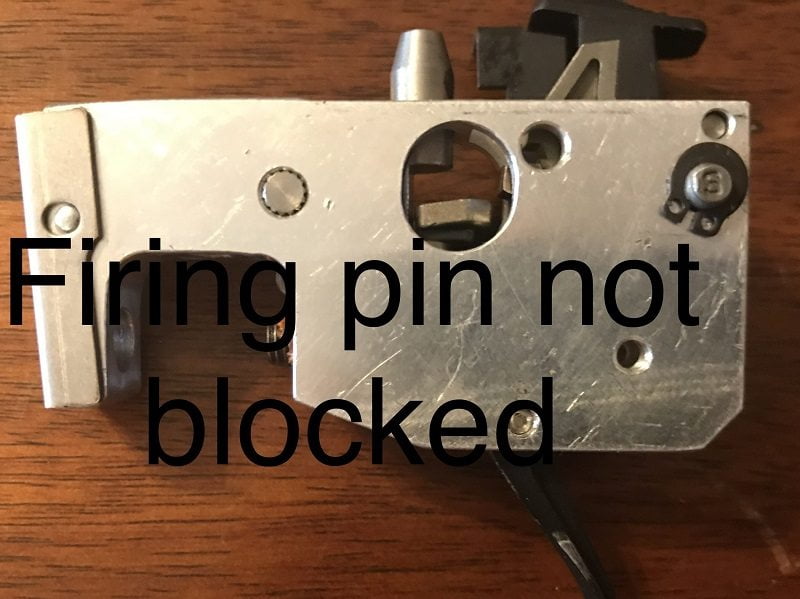 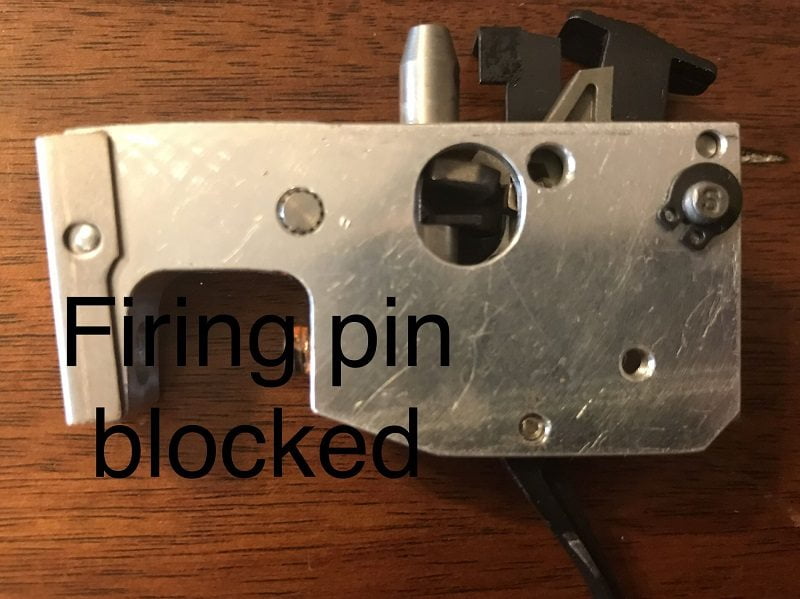 The stock on the long-range models is very similar to the McMillan Game Scout and the stocks on the Edges are similar to the McMillan Sako hunter. The action is bedded into the stock in the tang and lug area and uses a Sako 85 style recoil lug. When it comes to shooting long range from the prone position I much prefer the vertical grip but have warmed up to the Edge’s more classic grip and find it to be a great trade-off, as it is more versatile in its uses. The stocks have Limbsaver recoil pads, which are great at recoil reduction, but not as cosmetically appealing to me as the Pachmayr Decelerators.

The optional muzzle brake is a proprietary radial port brake, which is very efficient, but blows dust in your face when shooting prone, as does every radial port brake. I would prefer to have the standard brake be a side discharge type.

Time for the most important part. The test target provided with the rifle showed a preference for the Nosler 180 Accubond factory ammo. 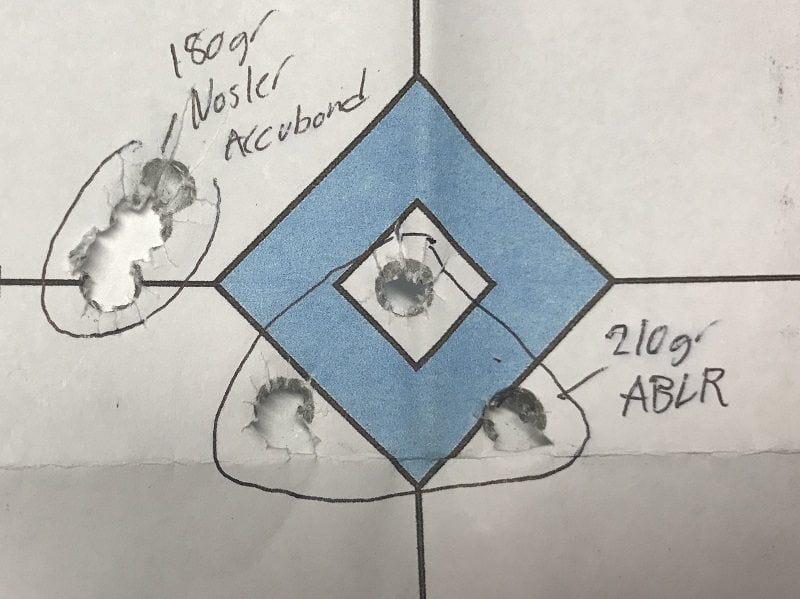 I had purchased some solely for the purpose of the review, knowing I would just reload the brass after testing. The rifle easily repeated the test target, shooting just under 0.5 inches at 100 yards.

I quickly moved to load development with Berger 215 Hybrids, Vihtavuori N570, and Federal 215 Match primers.  Load development did not take long and I was shooting well under 0.5 MOA with single digit extreme spreads. 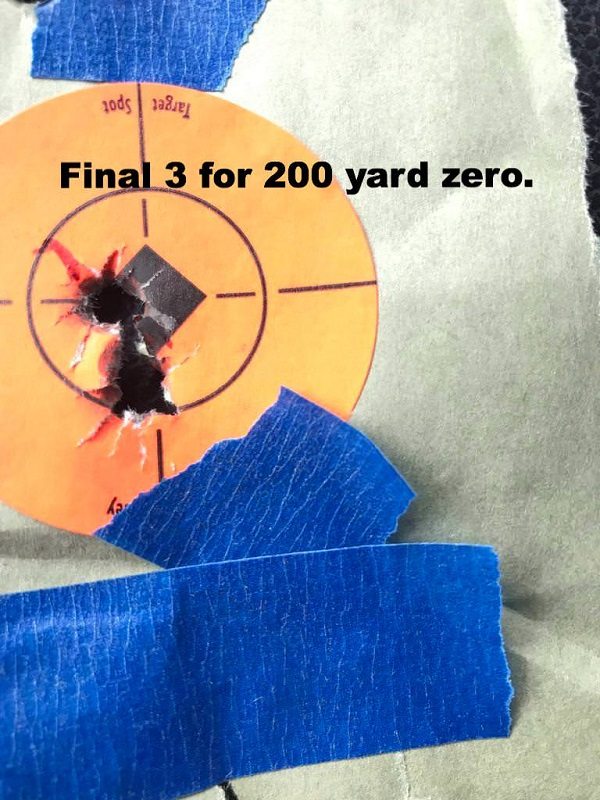 After drop validation, I was off to an Arizona Elk hunt.  I verified cold bore with a hit at 500 yards the evening I arrived in Arizona and another at 670 yards the following morning.  After six days of hard hunting, we found ourselves running out of time and stuck on a ridge 800 yards away from a shooter bull. After ranging and dry firing multiple times I dialed the NXS and squeezed the trigger to the bark of the CT Edge. The rifle did its job just as expected and the elk dropped with one shot. 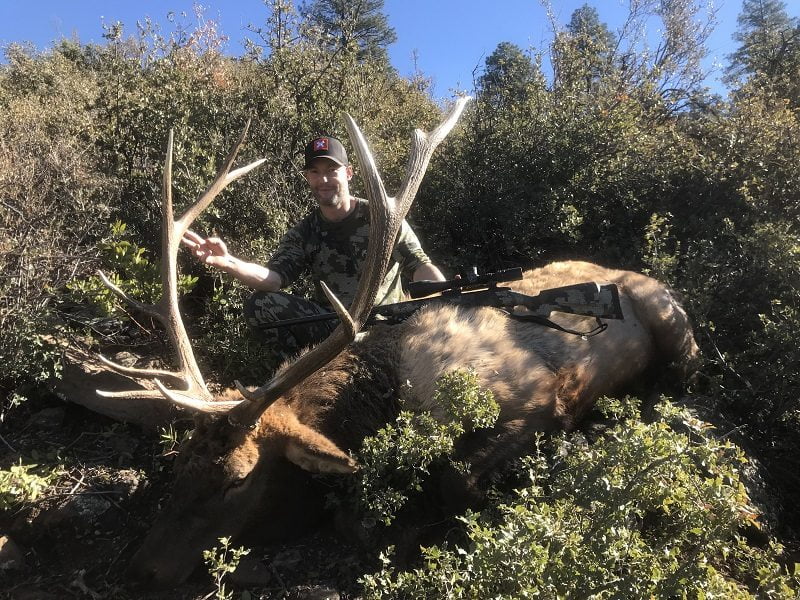 To wrap this up, I would absolutely make this purchase again. I have built a few customs and this does everything they would and more with a very competitive price.  I have no doubt the entire line up from Fierce will perform just as my CT Edge does. The Fierce actions are my new favorite due to the near flawless cycling and smoothness. The fit and finish are excellent, the accuracy is as advertised, and the options they offer are growing. With these things in mind, I feel Fierce rifles stand alone in their respective price ranges. I see Fierce as an excellent option for anyone’s needs.

You can ask Ryan questions or comment on this article here.