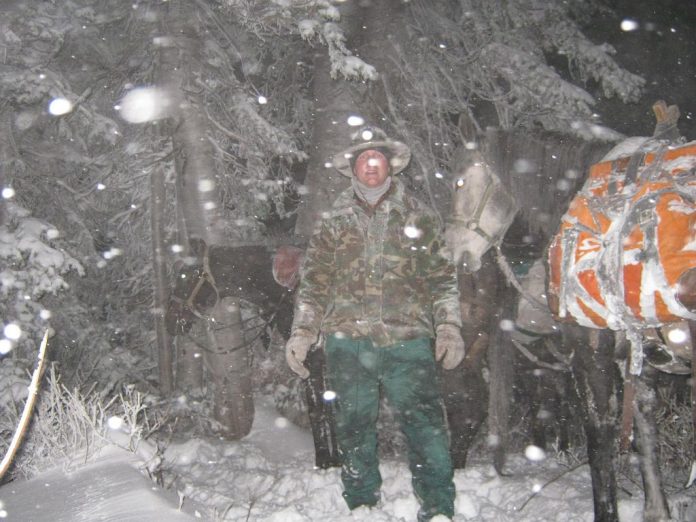 The blizzard packed sixty mph winds almost drowning out the whinny of my saddle horse tied in the spruce a hundred yards above.  Working at a fevered pitch, I struggled to keep upright on the steep slope without stabbing myself.  My packhorse, Missy, tied a few feet behind me, answered her compadre’s cries for companionship.  With only one scraggly spruce to tie to at the kill site, I had to separate the horses, now my lifeline to get back to civilization.

The blood stained snow was almost white again as the storm pounded the mountain.  Trying not to fall, I cut along the spine to the hip joint then twisted the last quarter until it pulled free.  Loading it hastily, I tied a basket hitch as best I could with my numb bare hands.   The load was awkward, but the sawbuck was still centered on her withers.  It should hold as I make my way back up to the horse trail a thousand feet above.  I slipped my still bloody hands in some wet wool gloves that offered some refuge from the cold.  Tying the cape, head, and antlers onto the internal frame pack, I slung it over my shoulders.  As much as I trust my horses, I don’t want to roll one on a set of antlers that only come around every few years.

The wind blew the snow horizontally stinging my face as I trudged back to my saddle horse, Rain.  In just the time it took me to quarter and load the buck, the storm had put down nearly six inches of snow on the six already there.  Rain’s whinny guided me in to where I’d tied her in the thick spruce.   The storm ripped at the tree tops above us like a hurricane.  The slope leveled some there so I sat on the ground next to the horses.  I was totally exhausted.

I had planned to lead the horses to the top of the mountain to the trail, but there was no way I could buck the snow that far.  I had killed the deer at noon after four hours of tracking him in the near vertical terrain, just as the blizzard set in.  I then had to retrieve the horses from the top, so I’d been bucking snow almost nonstop since first light.  It was now 4:30 PM.  This was incredibly steep country to be riding horses in, but if I switchbacked enough, I should be able to ride all the way up.  I decided to try to mount up here.

Rain let me on, but the steepness of the slope caused her to struggle for her footing before I could get in the stirrups.  She dropped her rear end and then came back up, hitting me hard enough to throw me.  The deep snow broke my fall, but now the horses were loose.  If I lost them, I’d never make camp and would have to stay out in this God-forsaken storm all night.  I fought to my feet with the buck still on my back and lunged for the lead rope dragging behind Rain.  I caught it by the last few inches and pulled hard to stop her.  As bad as it went the first time, I had to try to mount again.

This time I cleared the saddle and got my foot in the stirrup before she started to struggle for her footing.  She got her feet under her and I felt secure, so I tugged Missy’s rope and spurred Rain.  She kept her feet this time and started churning through the snow like a buzzsaw through timber.  The cape and antlers got in time with her lunges smoothing out the ride and I hung on tight.

We made good progress and hit the top within thirty minutes.  I had dropped off the trail three hours before and since then the high winds had crested the snow forming a cornice that was four feet high.  Rain leaned in and busted through the drift like a snowplow with enough force to throw me onto her neck, dislodging my feet from the stirrups.  I would have fallen, but her next lunge threw me back into the cantle of the saddle and I was upright again.  I was glad nobody was there to witness my flailing antics.

Finally, we were on flat ground but the unfettered wind was now blasting the full sixty mph to our backs causing the mares to break into a trot.  Normally I’d slow them, but let Rain have her head as the sooner we got off the top and into the timber below, the better.  The buck’s antlers flopped wildly on my back, but the dozen or so half hitches still held them to the pack.  Riding into the timber, the massive storm seemed to lose her grip on us and the horses slowed to a walk.  I settled in for the long ride, thanking God I was off the top. 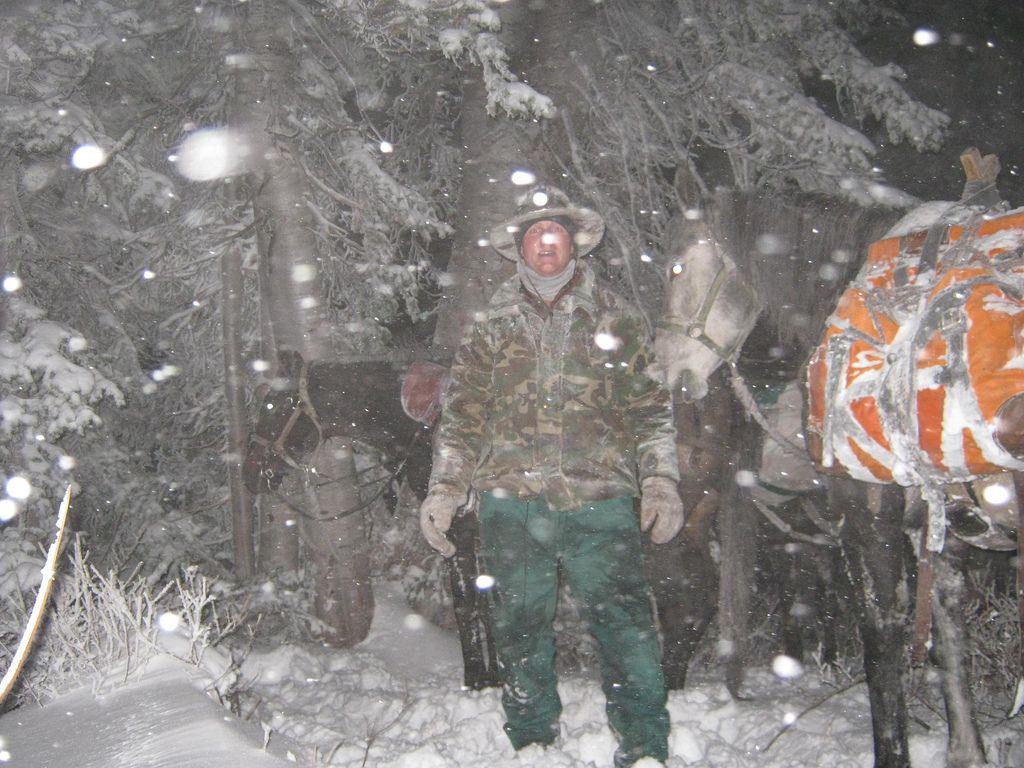 I rode an hour and half around the mountain, slowly losing elevation as a black darkness set in.  The snow had stopped, but the clouds held low to the ground.  My headlamp only penetrated the thick fog a few feet, so I just shut it off and trusted the horses to stay on the faint high-country trail.  Camp lie a few more miles ahead and they wanted to get back as much as I did.  Because of the storm, I was likely the only deer hunter in the miles of mountains that surrounded me, and I felt the emptiness of it all.

It was a welcome sound to hear my second packhorse, Charlie, let out a whinny in the pitch black as we neared camp.  He had been tied for over 12 hours and was just as happy to see us.  I dumped my pack, pulled the panniers and the saddles, and made my way to my Eureka two-man tent.  The horses would have to wait until morning, due to the storm, before I could graze them.  Their long faces reminded me of their empty stomachs.

I leaned my rifle and the pack against the tent and lit a small gas lantern.  The cold dark camp slowly came to life.  I had tied a 6×8 tarp up next to the tent the day before as an extra shelter and amazingly, the wind had not taken it down.  I noticed my poor Weatherby looked like an icicle.  With the lantern at full power now, my eyes wandered to the cape and antlers.  His antlers were some of the best I’d seen in fifteen years of hunting those Wyoming Mountains.  I prayed and thanked God.  I really wanted to put a tape on him, but was too tired and cold. 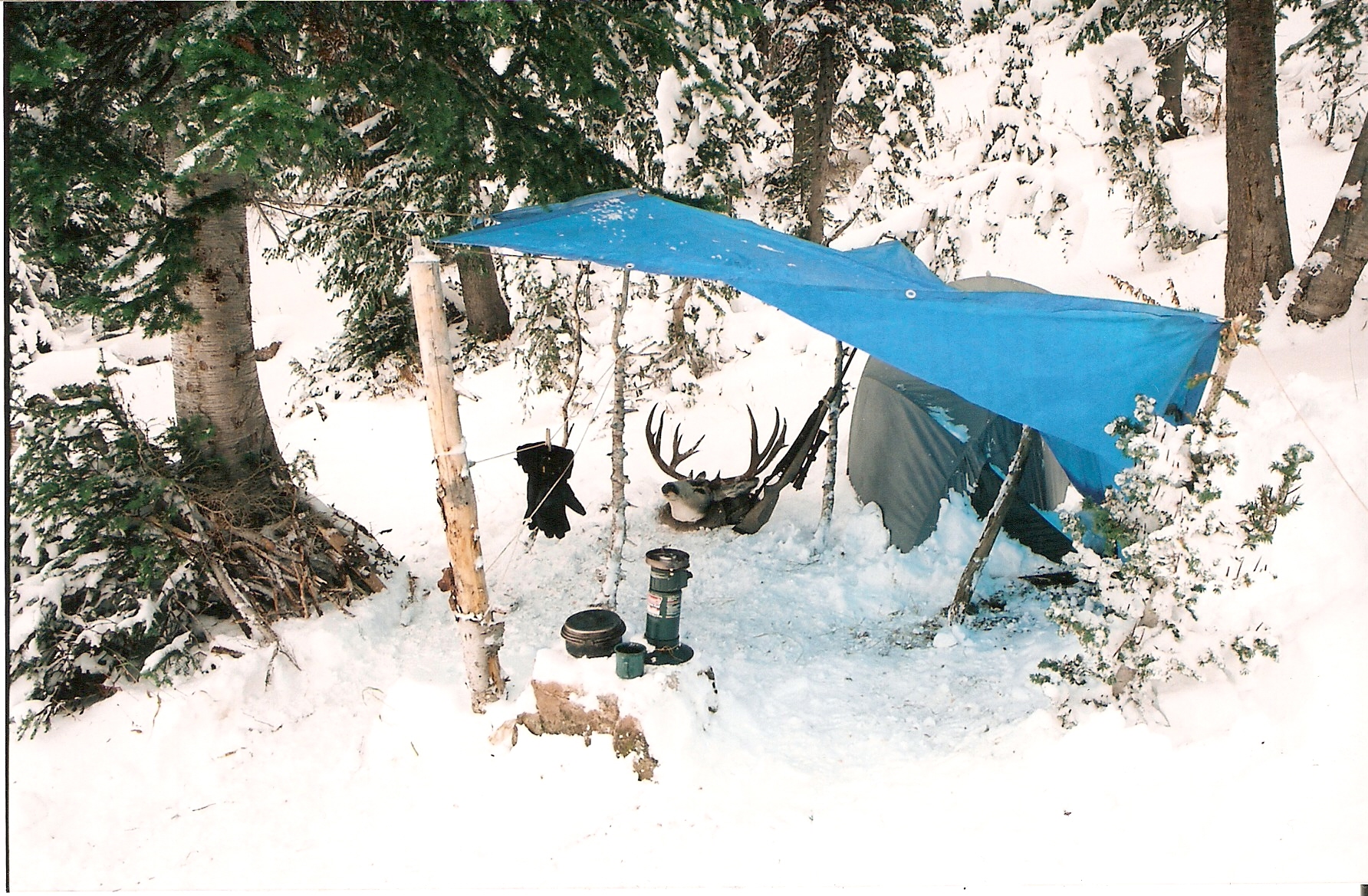 I dug through a pannier and retrieved a meager dinner of rice and soup.  Warming it on my propane stove seemed to take forever as I sat shivering out in the weather.  Occasional bursts of snow pellets blasted the tarp draped over my makeshift kitchen.  The concoction was finally warm and I drank it straight from the pan, feeling the life-giving heat penetrate my body.  I could relax a little now and I reflected back over the last few months.  I’d hunted this buck for 16 out of the last 40 days, and it had ended as epically as man could hope.

My pickup, parked at a lonely trailhead ten miles south, was still a four-hour ride down the canyon.  I knew the storm would break during the night and tomorrow I could head back to civilization, fully satisfied with a hunt I will never forget. 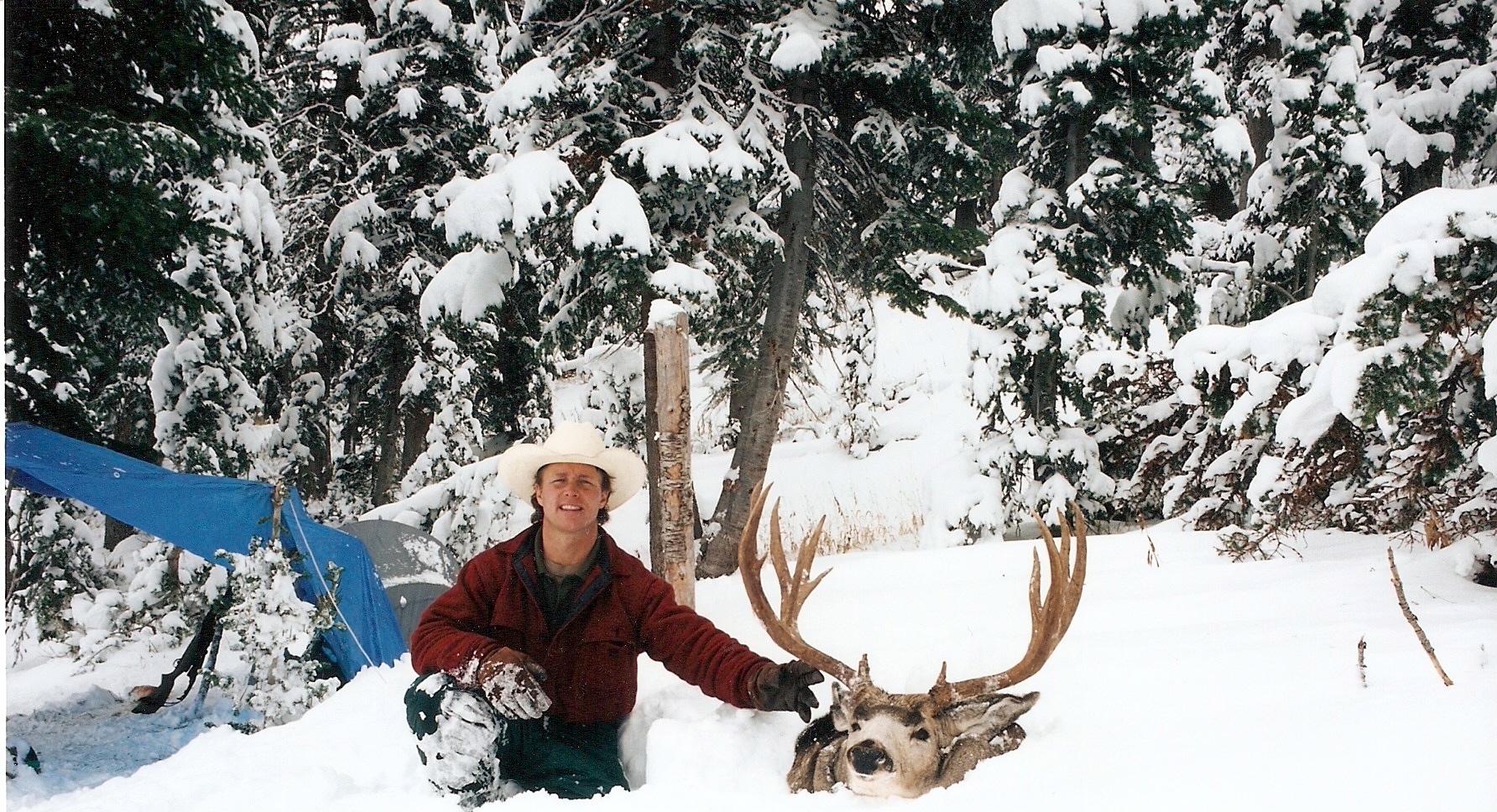 It was 10:00 pm by the time I crawled into my military mummy bag.  I still shivered from my damp long underwear but knew in a few minutes that the bag would warm up and then so would I.  As I drifted to sleep, I heard the faint sound of a horse pawing the ground a few feet away.  The wind rushed over the ridge above, climbing to a howl before lulling a moment, then starting its climb again. I thought back over the years of using horses in the backcountry and all the work it takes.  Putting up hay in the hot July sun, the backbreaking job of keeping them shod, and the years of training it takes to get a horse ready for the mountains.   I knew right then,  it was worth it all.

To read this story, top techniques, and much more, check out Robby’s new book, “Hunting Big Mule Deer: How to Take the Best Buck of Your Life” by clicking on the front cover here: