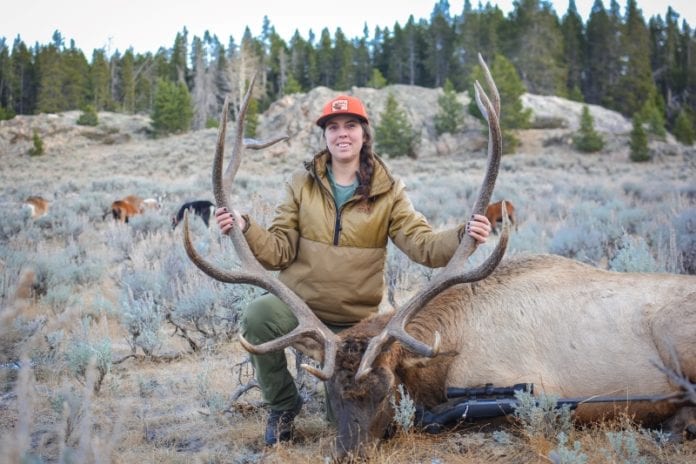 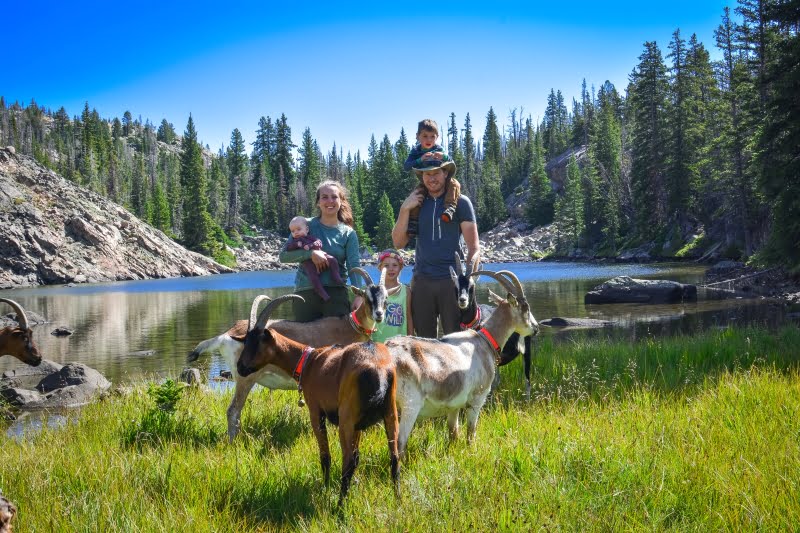 Pack goats seemed to be a natural choice for us.  It all began seven years ago when I met my husband, Justin Starck. He was in Northwest Wyoming and I was in southern Colorado, so we had some distance between us. I remember I would spend long weekends driving up to Wyoming and we would spend that time backpacking or going to 3D archery shoots. It’s what brought us together and it’s something we have always enjoyed. In a way, backpacking and the outdoors are the foundation of our family.

How This Journey Started

Years later, after engagement and marriage, we found ourselves expecting our first child, a little boy. We knew we wanted to have children, but we also knew we wanted to continue backpacking. We agreed that we felt it was important to include the kids in as many of our outdoor pursuits as we could. There was only one small issue: both our backpacks were currently maxed out for all practical purposes. When our son was born we were able to make do with my husband carrying literally everything. I carried our son and his essentials. We knew we wanted one more child and that led us to research a pack stock option.

We came across an article about goats being used as a pack stock option. We both looked at each other and laughed. Who knew curiosity would eventually get to us. We later picked up a book titled “The Pack Goat” by John Mionczynski. In this book, we learned that pack goats are very low maintenance, have a low startup cost, require very little acreage, and are very versatile compared to other pack stock. He goes on to explain pack goats can easily maneuver over country like boulder fields that other pack stock cannot. All this sounded extremely fitting for our family and we felt we had to pursue this as an option, to us it was worth the shot. 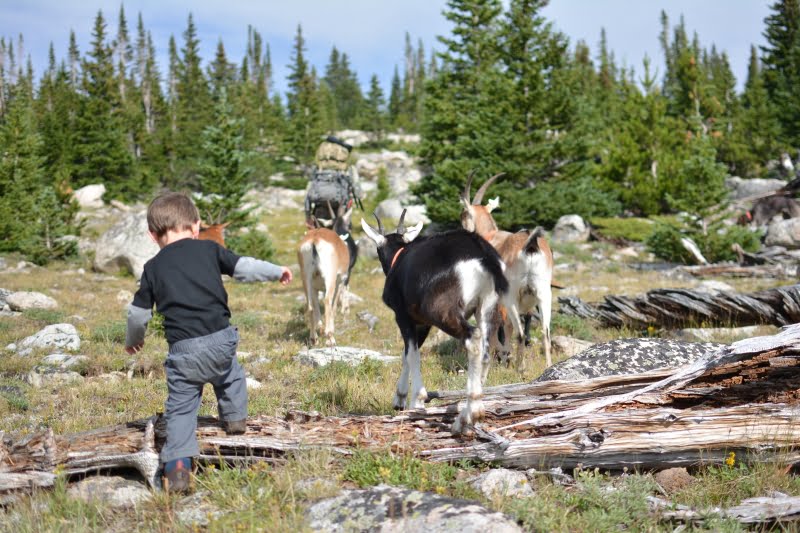 That year we purchased five wethers (castrated males) as babies and bottle raised them all. A year later we picked up two more. We spent our summers backpacking with all of our goats (and our son) to prepare them for the mountains. A pack goat cannot carry full weight until the mature age of three or four years old. So, we had time to imprint a bond and implement training which simply comes down to exposure.

Three years into pack goats we now are up to two children.  Our plan has worked as we are still able to preserve that same freedom of backpacking that brought us together.

People often ask that question.  Although there are several fitting reasons for our family, the one we always come back to is the simple fact that it’s the closest freedom to backpack hunting and/or backpacking. They help carry our gear and the meat.  They follow you wherever you want to go, and when we are hunting or hanging around camp, they stay near you. Unlike horses or other pack stock, they actually want to be around you. With horses, there is a lot of tending-to required. Just keeping them from heading for the truck requires hobbles, picket stakes and highlines and time, lots of time. 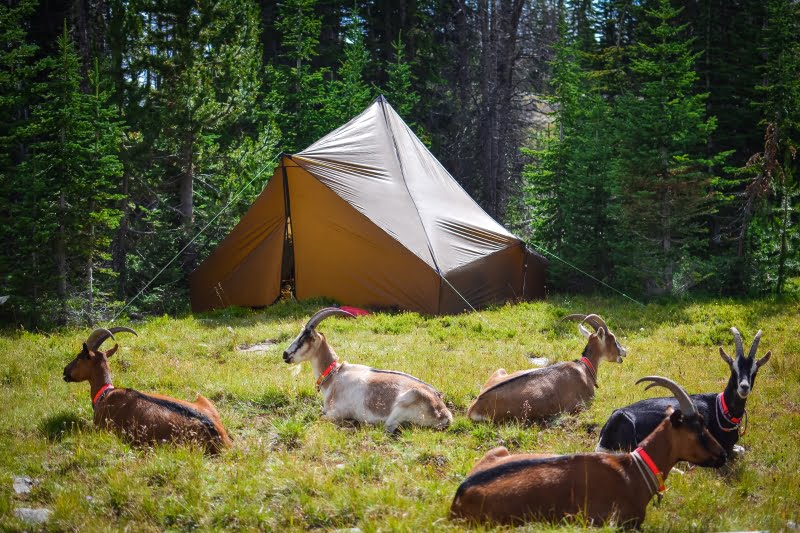 With the goats, once we get to our camping location we can set up our camp and not have to worry about the goats running off. Sure they still need low lined or high lined at night when you are not in their direct sight, but other than that, they want to be near you.  To them, you are their herd leader. It’s like having a pack stock without having the responsibility to some extent. 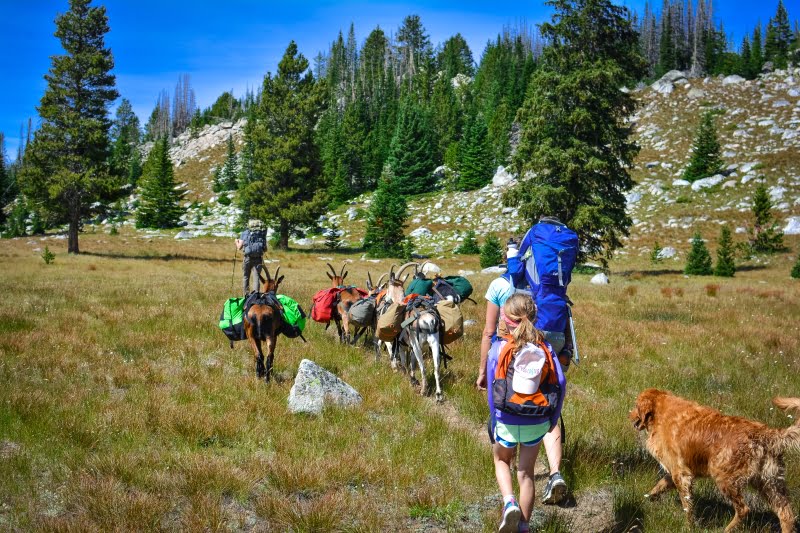 This summer, we took a family scouting trip into the high country. We stayed for two nights, with two different camps. In total, we covered 9 miles of beautiful country. We brought along our niece who had never been on a backpacking trip before. She still talks about that trip to this day. Also with us were our two small children: Our three-year old son and five month old daughter.

One of my fondest memories from that trip was when we spotted a group of cow elk and their calves. Having my daughter strapped to me listening to the elk talk back and forth doesn’t get any better than that. It was a great time; we slept comfortably, had great food, and the best “hotel” money can buy–and right under the stars. 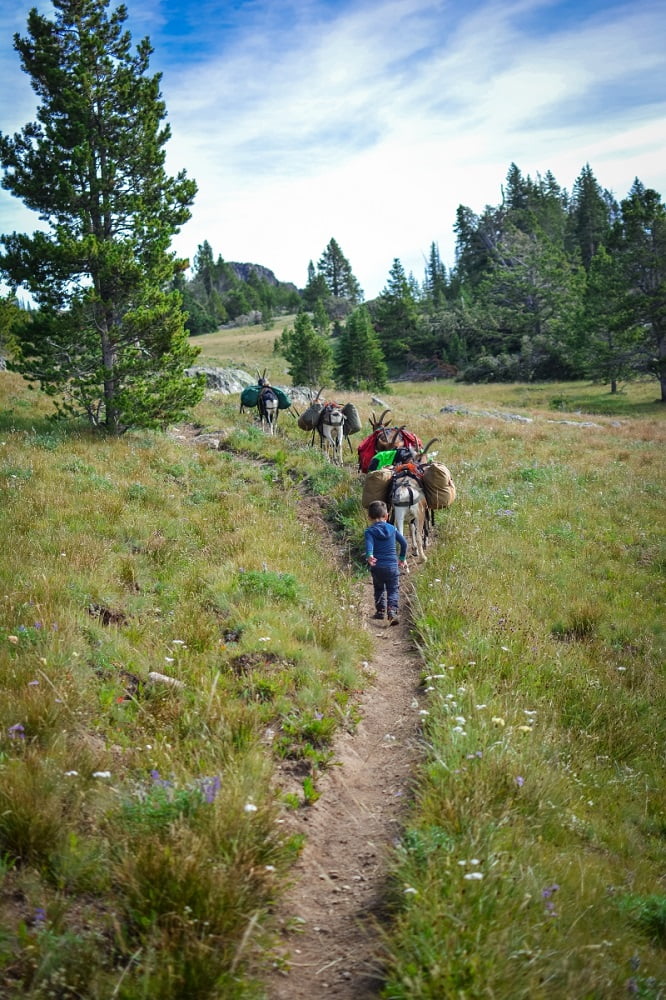 Not only have goats allowed us to actively take the family along on our outdoor pursuits, but it’s also allowed us to plan hunts we would have never considered without them. For instance, this year our target deer hunting spot was not only tucked eight miles back from the nearest access point, but also in an area with very little water and feed required for conventional stock.

Goats typically don’t need to be watered every night so they are able to handle this type of situation.  We set up camp along a small seep with nothing around but sagebrush hills; no way to highline horses here!  The goats browsed and relaxed while we set up our tipi and inflated our sleeping pads.  Its times like this that you almost forget they are even there.

With a couple of hours left in the day, we left camp with the goats in tow.  Because they are bonded to you, it is important to keep them with you at all times.  Justin wanted to glass some country east of camp.  After gaining a little elevation my husband was glassing back to the west while waiting for me to catch up and spotted two groups of does right away.  One had a nice buck with them.

“He is worth going after,” were the next words I heard!

When planning our approach we knew we could take one of two routes.  One would result in a longer, across-the-valley shot but allowed for an approach that would keep us concealed.  The other was to attempt looping the opposite direction and coming in on top of him.  First, we tried the long-shot option but ran out of cover in the 400-500 yard range.  I didn’t want to take that shot as he was near a private land boundary and I wanted to make sure I could put him down quickly.

Plan B resulted in a large loop to get around and above the deer.  This is where the goats may or may not have come into play–you be the judge.  We had to cross at a saddle at a distance of about 900 yards from the deer.  There just wasn’t an option to stay completely out of sight with sunset looming.  We crawled the distance, Justin in the front followed by the goats and me bringing up the rear.  When we reached the far side of the saddle I got the thumbs up from Justin that the deer were not onto us.  While we were able to complete the rest of the stalk staying out of sight, it did include crossing a steep draw and climbing up the backside of the ridge the deer were on.

After catching my breath, we crested around the edge of the ridge. Justin spotted two does but no buck.  I suggested that we should just ease forward and wait, so we did.  At this time the goats got in front of us.  We’ve found that mule deer do not normally perceive the goats as a threat, but you really never know how they are going to react, especially at 120 yards!  The deer were not alarmed yet, even though they could see the goats.

We used the goats as cover to crest around the end of the ridge another five yards.  This opened up more country to us, enough that we could now see the buck.  He was watching the goats and standing quartering towards us.  All I had to do now was wait for the goats to clear so I could shoot him.  Eventually, the goats did move (with the help of some rocks being thrown at them) and I took the shot, dropping the buck in his tracks! 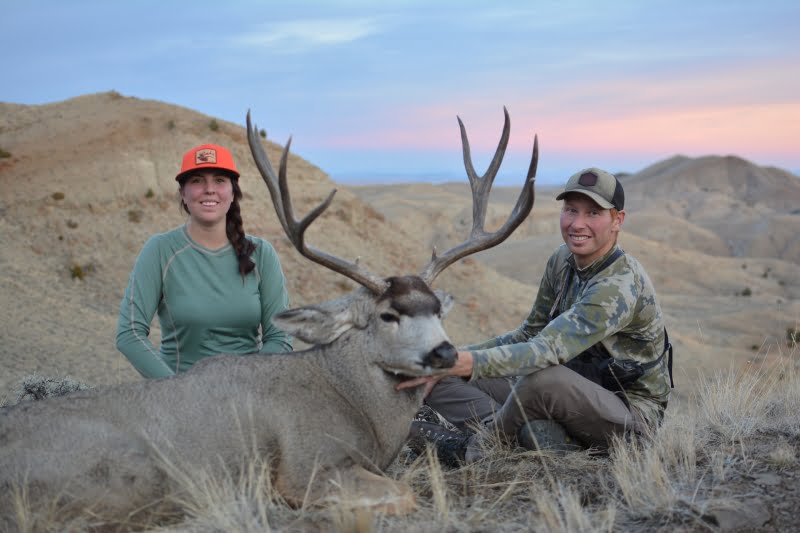 The next morning we packed up camp and the deer.  The pack out was no big deal with the goats.  I only had to sling my day-hunt gear and the head on my own shoulders. We split camp and meat between the goats and my husband. You can’t complain about that!  And that is with our goats only being 2-1/2 years old and carrying light loads. 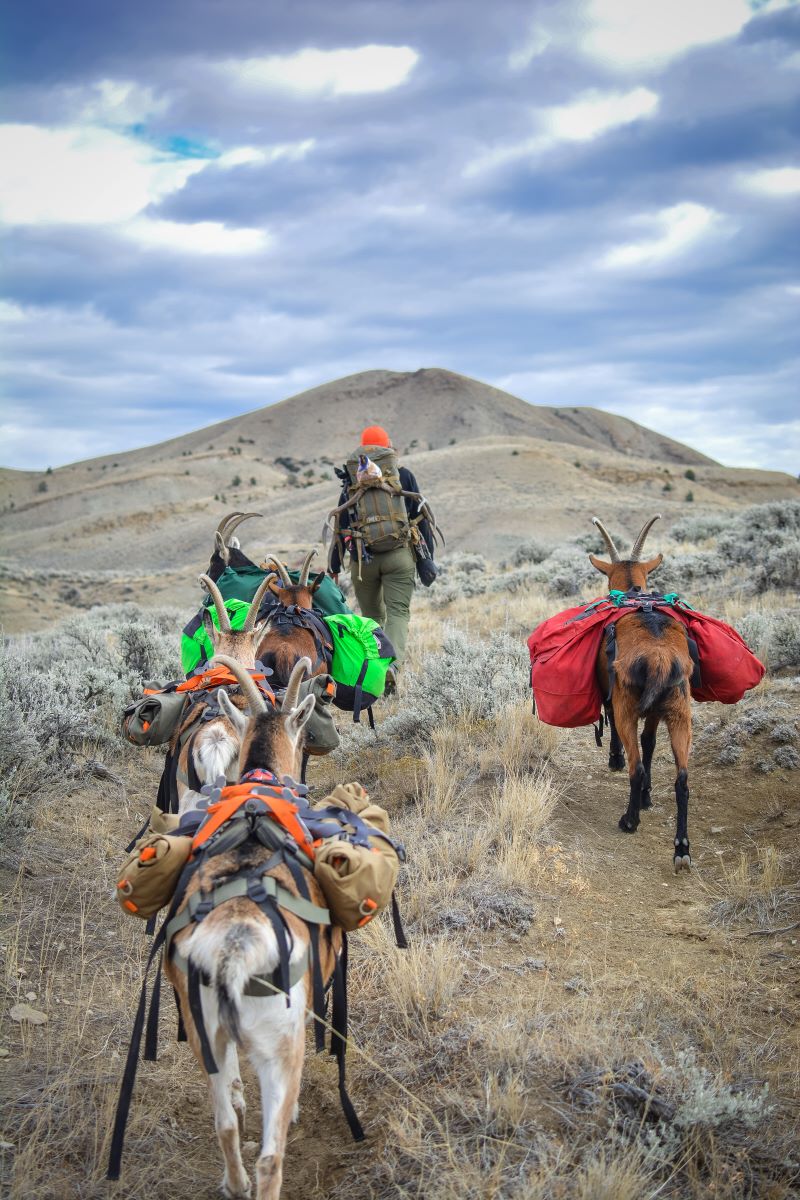 Next year will be next level as the goats will be able to carry double what they are now.  My husband, Justin, says it best,

“You begin to plan hunts & trips around them, that you would have never before.”

Our hunt plans for future years include many hunts that will now be possible thanks to the goats without killing ourselves in the process.  We feel like we are only getting going, all because we decided to take a chance on this relatively unknown pack animal.

If you find that curiosity gets the best of you in regards to pack goats, there are great resources out there available to help you determine if pack goats are a fitting situation for you and your family. I highly recommend the book mentioned earlier.

Also, Marc Warnke has incredible resources available at his website. You will not only find FAQs but also very great tutorials on his webpage. The last resource I would recommend is the North American Packgoat Association. If you join this organization, which is $20, you get access to a downloadable PDF “Pack Goat 101 Guide” which covers an array of categories when it comes to pack goats such as shelter, breeds, feed, maintenance and care, and best management practices to just name a few. As always feel free to reach out to us with any questions as well, it’s no secret I love to talk about our goats.

You can comment on this article or ask Desarae questions here.

Click here to discuss anything related to pack stock. And, don’t forget to checkout Robby Denning’s blog for great content on running horses.