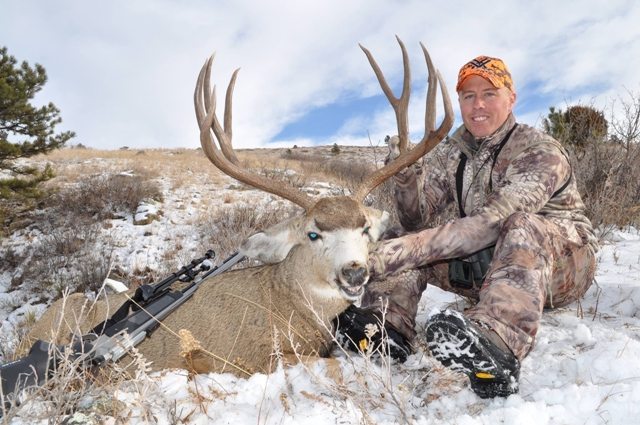 Late season muzzleloader hunts after the rut can be a difficult time to locate muley bucks you found earlier in the seasons. This article will focus on how to find those bucks and what tactics to put into place to reward you handsomely. If you’re hunting western whitetails in semi-open terrian, these tactics will work for you, too.

I have been lucky enough to draw three late season muzzleloader tags in the last six years in my home state of South Dakota. These hunts start in December after the main rut.  While you may not hunt the late muzzleloader season here, you can use these same tactics to find bucks in any western state where December seasons are offered—muzzleloader, archery, or rifle.  A quick scan of western state fish and game department websites showed multiple hunts of this type offered in at least Idaho, Colorado, Nevada, Arizona, and New Mexico. Do your research dilegently and you may end up with the chance to hunt bucks at this unique time of year.

Finding deer during the late season—Where to Look

By the time December rolls around, most rifle seasons have been closed a while and the deer are getting back to their old routines before orange-clad hunters littered the countryside. The bucks will begin to focus on gaining lost weight and rebuilding strength from the November rut.  Food is now their focus as this is what will get them through the harsh winter months ahead. Look for brushy areas with ample browse.  Talk to the local biologist if you’re not sure what areas to start checking.

Besides food, deer need cover and terrain that offers security and protection from the elements. Brushy or timbered draws, coulees, and canyons with the right food are hotspots for late season bucks.

Finally, consider snow depth and aspect.  Deer are going to be in areas with less than 18″ of snow on the level or on south-facing slopes if if they can.  If there is more snow than that and/or no access to south slopes, the deer will likely move.  Check your area for tracks as they won’t lie—if the deer are there, you should find fresh tracks.  When you find an area with the feed, cover, and snow depths mentioned, you’re on the right track to a successful hunt.

Before my 2008 and 2010 hunts, I scoured public land terrain on Google Earth looking for locations that held good forage, bedding areas, and protection from the elements. I knew that the areas I found had plenty of hunting pressure during the November rifle season, but I was confident they would hold deer again even if they had been pushed out earlier.  Once I arrived, I found the snow wasn’t too deep and there was enough food and cover.  As expected, I located good bucks close to feeding areas.  It took a few days but I killed each of them transitioning between the feeding and bedding area. 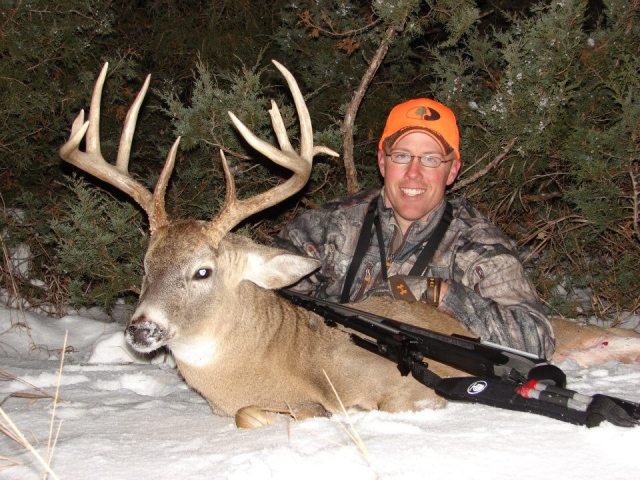 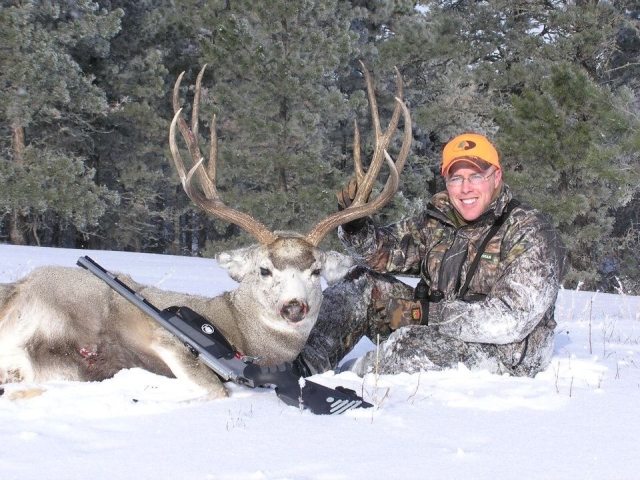 In 2013, I hunted a good mule deer buck that I had found in the early archery season but was unable to kill him. I visited the area numerous times during the rifle season just to try to keep tabs on him.  As I peered through my spotter trying to locate him, there was always the same familiar orange haze and I heard numerous shots. Over the days, I hiked many miles in search with no luck. I eventually found the young bucks he had been with earlier in the year, but I was never able to turn the big buck up. I prayed that he hadn’t meet his demise during the month-long rifle season.

The first day of the December muzzleloader season, I checked the areas with the right food and cover but with no luck. Two weeks later, I was back but still no big buck.  I decided to move to another area that had everything the deer needed.  Once there, I found numerous bucks but nothing mature enough to shoot.

Finally, and almost in deperation, I decided to revisit an area where I had seen the buck way back in October. Much to my surprise, I found him breeding does as the evening light turned to darkness. The next day I returned and was able to kill the buck that I had almost given up on! As expected, there was still the right combination of feed, cover, and snow depth in the area but I was still surprised to find him.  That buck appears in the lead picture of this article.

Did I just get lucky finding this buck again or was it my persistence and a plan? I would say a little bit of both, actually. I surmise that up until rifle season, it was fairly easy to find him as he was in a summer pattern and visited the same areas on almost a daily basis. But once pressured, he did what any mature buck will do: he either remained well hidden or went to another area with little hunting pressure.  In this area, that probably meant some of the private ground or the rough, thick timbered areas that many hunters avoid (or don’t hunt correctly.) While I’m still unsure where he went, I eventually killed him where he had the needed food and security late season bucks seek out.

These three bucks taken with muzzleloader and many other late season bucks have fallen for me using these tactics. Get out there, look for the things that deer need, hunt hard, and stay persistent! You will be rewarded handsomely!