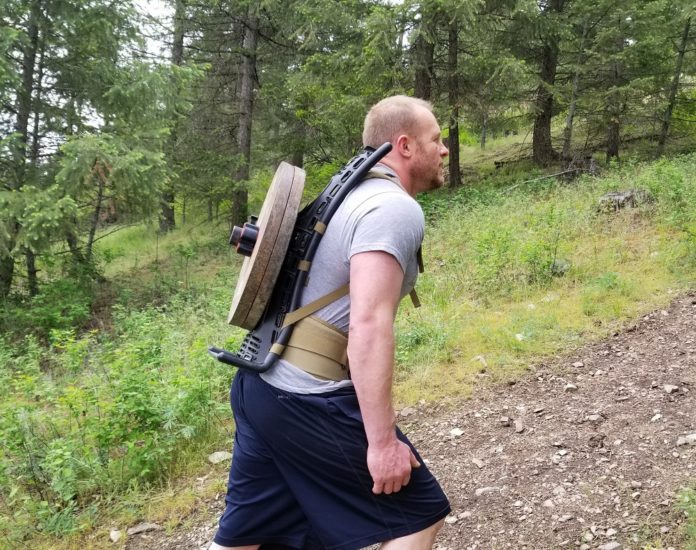 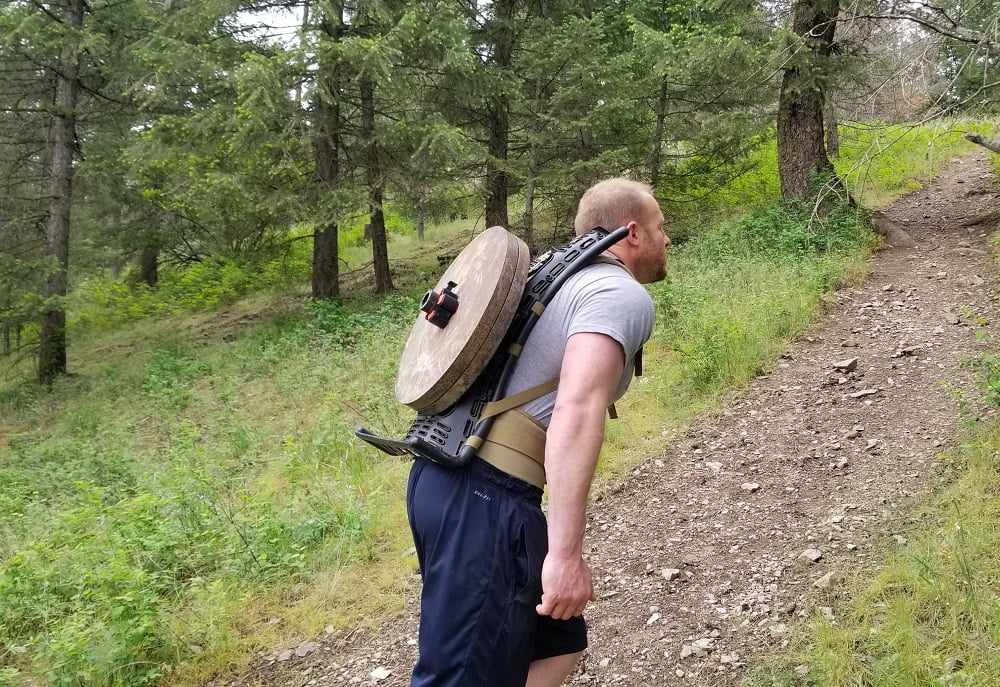 I go from two extremes:  One, from almost nonstop summer and fall scouting/hunting in steep backcountry, to another traveling for work where I can’t consistently hit the mountains or a gym. Staying in mountain shape is critical for both my scouting business and packing out game. I’m packing out big game animals every year on my back, often over five miles in steep, trail-less country.  No matter what shape I’m in, packing an elk out of the backcountry is a straight up butt-kicker. It seems the only thing that gets me ready for this is actually packing elk out of the backcountry; it seems to get progressively easier after each animal is packed out during the season. Then it is frustrating to start over from scratch the next season.  That is why the Outdoorsmans Atlas Trainer Frame System caught my eye. See website here.  But there was a process in getting to actually putting the Atlas Trainer on my back.

Several years ago, I caught on and started using packs loaded with weight to train.  My method wasn’t perfect but got me as close as I could be to pack-out shape. It is, in my opinion, the best way to train for backcountry hunting. When I am able to spend all off season training with a heavy pack and then start going light when its for real; it makes for a much more enjoyable hunt or scouting trip to be able to hike up steep mountains at a good pace without even thinking about how much farther or how many more feet of elevation I have to gain. Once an elk is down, it still kinda sucks but is a far less daunting task. 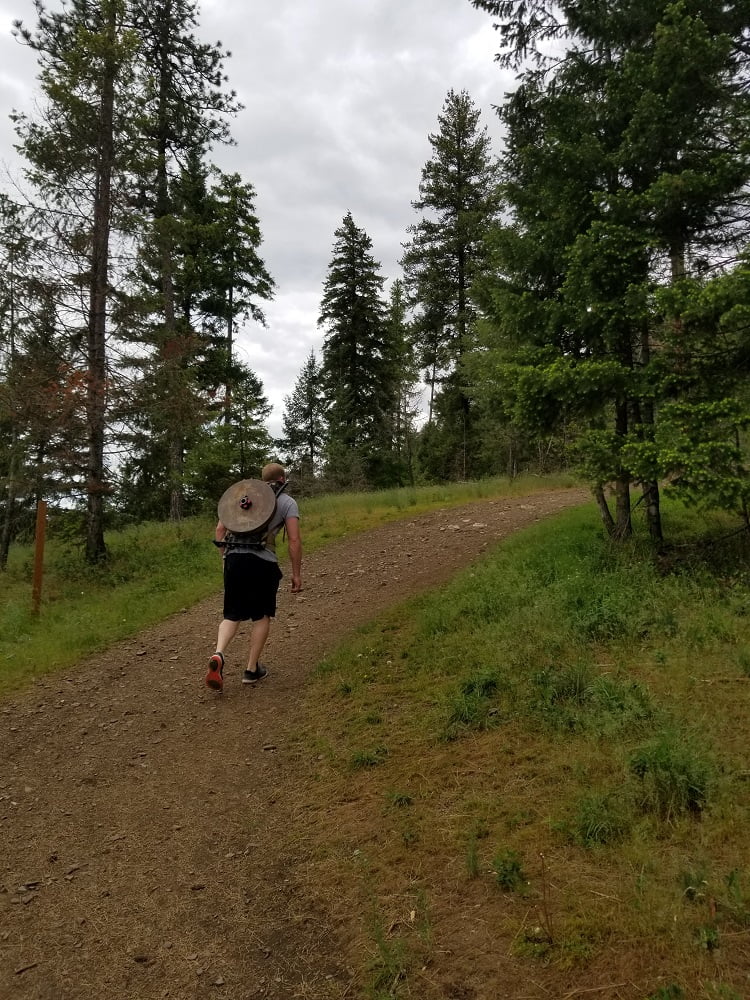 I have trained with a backpack stuffed with weight inside with anything from sand to plate weights for years and never have found a combination that works perfectly.  The first off season of pack-training with weight, I completely wore out my expensive pack and my wife wasn’t happy when I told her I had to buy a new one. After that, I turned to lesser quality packs as I wasn’t wanting to destroy any more expensive packs or get it saturated with months’ worth of sweat. I have found the whole pack loading less than ideal as it can be hard to pack correctly so that it’s balanced and comfortable, as well as making small adjustments in weight can throw off the balance quickly. Often times I find that if not loaded correctly, some part of my body is feeling the brunt of the exercise such as a hip or shoulder and not allowing me to move fast or smoothly enough to get the proper workout. Not to mention that the packs do not last long. I have been looking for an alternative for quite a while and when I first saw the Outdoorsmans Atlas Trainer, I knew I wanted one. 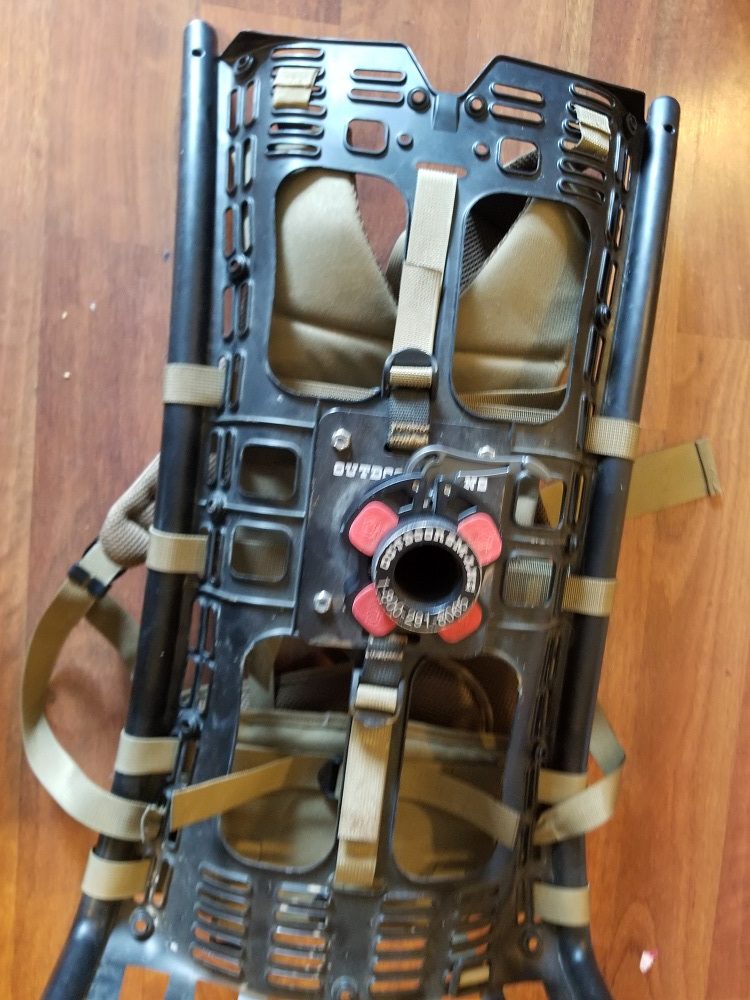 The pack frame itself is designed to carry up to 200 lbs. However, while using the Atlas Trainer, it is only designed to carry up 90 lbs, or two Olympic style 45-pound plates. The frame is a lightweight external frame made of a carbon-fiber-reinforced polypropylene which has natural give and flex to move with your body while climbing or slipping through brush.  It also has a curvature that is supposed to match the curvature of your back. That keeps the weight close to your body and is supposed to feel like an internal frame. The Atlas Trainer has a stud the diameter to fit an Olympic style weight that bolts to the center of the pack. It also has a clamp that holds the weight securely and is fairly easy to install or remove. 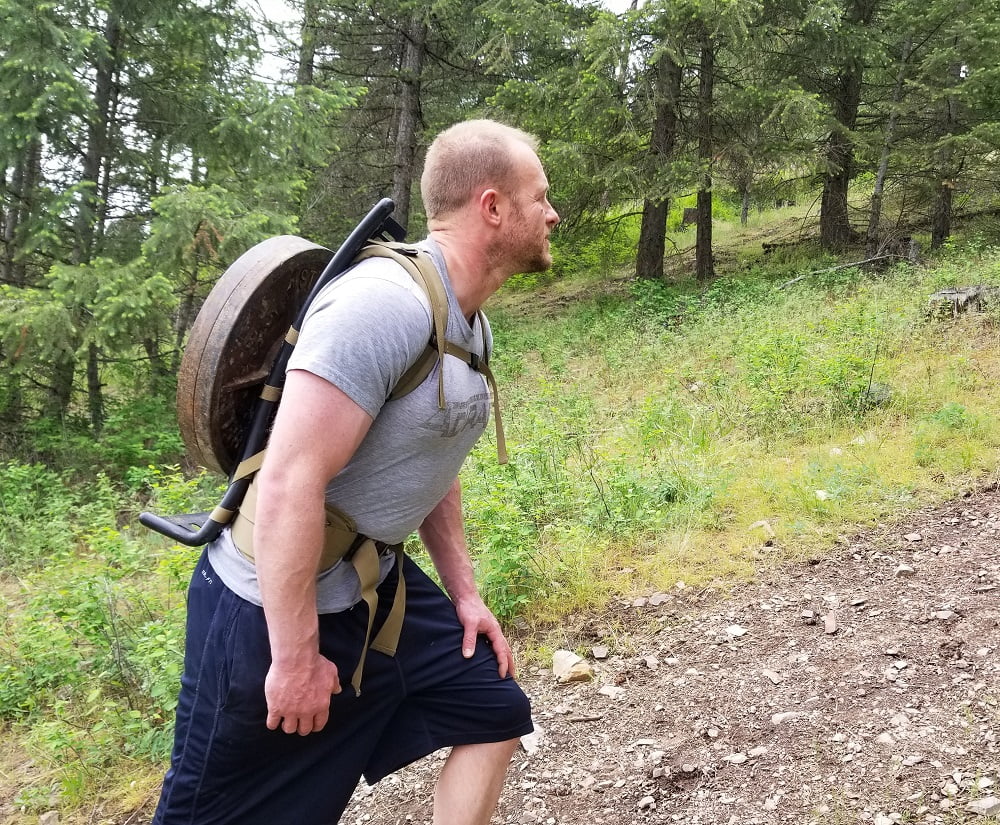 When I first received the Atlas Trainer, I was excited by all the possibilities. The pack was easily adjustable and the first thing I did was put a 45-pound plate on to try it out and was really impressed by how the weight was perfectly positioned on my back unlike loading a pack with heavy items. I took it for a hike up a steep incline and it felt like the lightest 45 pounds I’ve ever carried. I believe this is because the weight is centered on and tight to your back and not riding unevenly causing you to feel the weight in areas that shouldn’t be.

One thing I noticed while going at a good pace was that there was some movement and the load lifters seemed to not pull the pack in tight enough. I called Outdoorsmans and one of their staff told me how to remedy this. I took the load lifter buckles and looped it back through the top notch taking up most of the slack. This fixed the problem as it felt tight and snug against my back and carried even better. 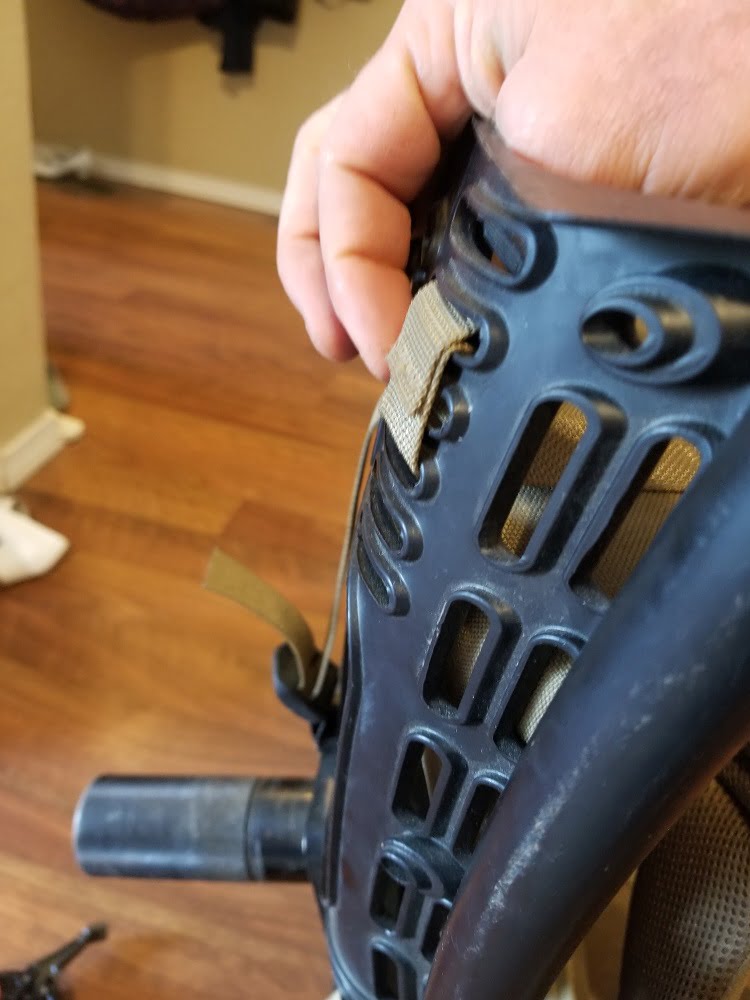 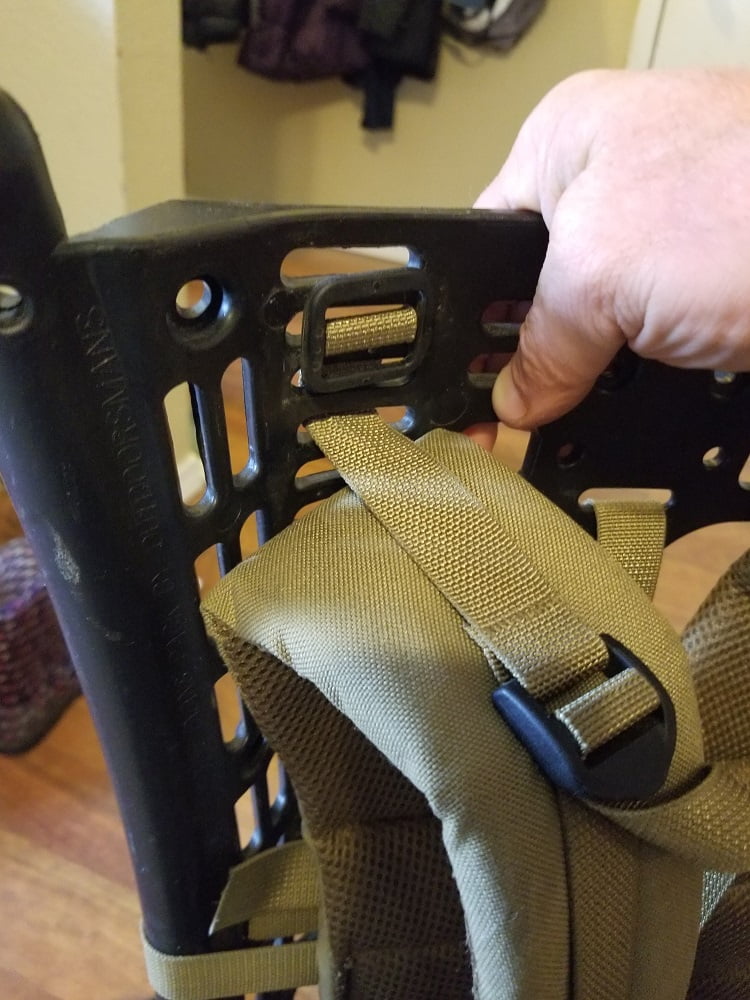 Although it is designed to hold up 90 pounds, I was secretly hoping I could get three skinny 45’s on it. However, as soon as I put the second 45 plate on and started hiking with it I realized it was maxed out; not the pack frame but where the atlas trainer connects to the flexible polymer frame as I could feel the frame flexing at the attachment point with certain movements. However, it still carried like the easiest 90 pounds I’ve ever carried. I just felt adding any more would damage the pack so I don’t recommend trying it. 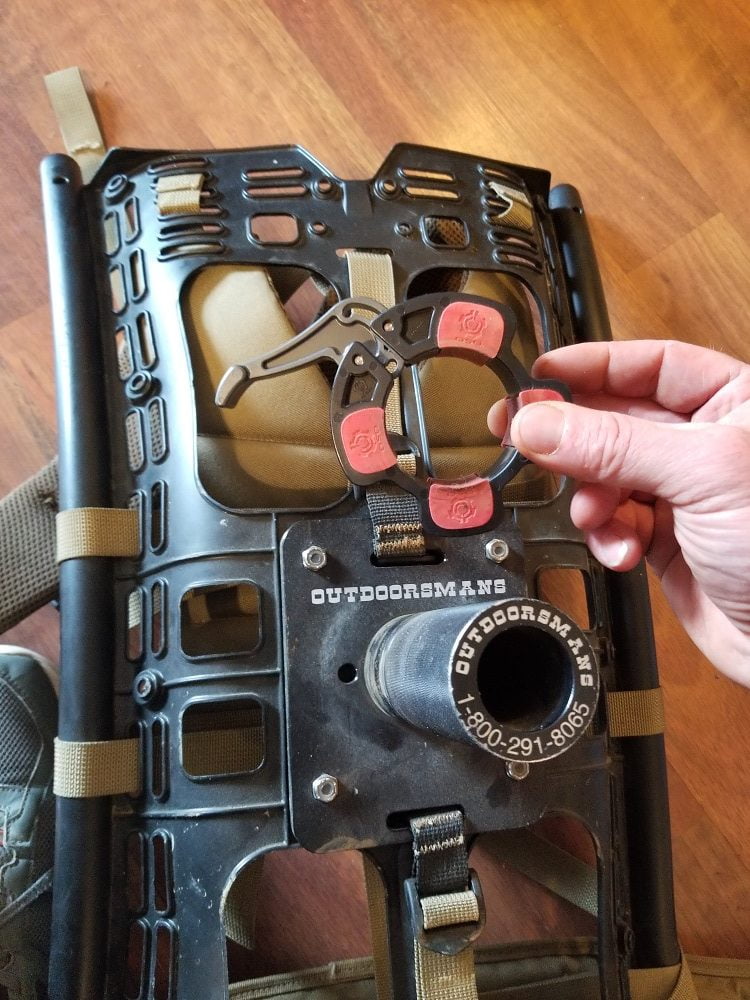 Since then, I have used it quite a bit on hikes, inclined treadmill’s, and stairs and have confirmed that it caries very well.  In fact, I get a better leg workout over a conventional loaded pack due to how snug and evenly it carries on my back; it seems like all the effort comes from my legs rather than hips and shoulders allowing for a smoother faster pace.

Another thing I appreciated is that the frame is very open and creates an air gap between the frame and your back allowing it to breathe and make it much cooler to use. On a lot of packs that I have used for carrying weight, they don’t breath very well causing a lot of heat and sweat.

I work out of town a lot without access to a gym. I started taking the pack with me wherever I go along with two 45-lb, one 25-lb, two 10-lb, one 5-lb, and one 2.5 lb plates.   It has proved to be invaluable for doing workouts away from the gym, as I can move up incrementally with any weight combination up to 90 pounds. 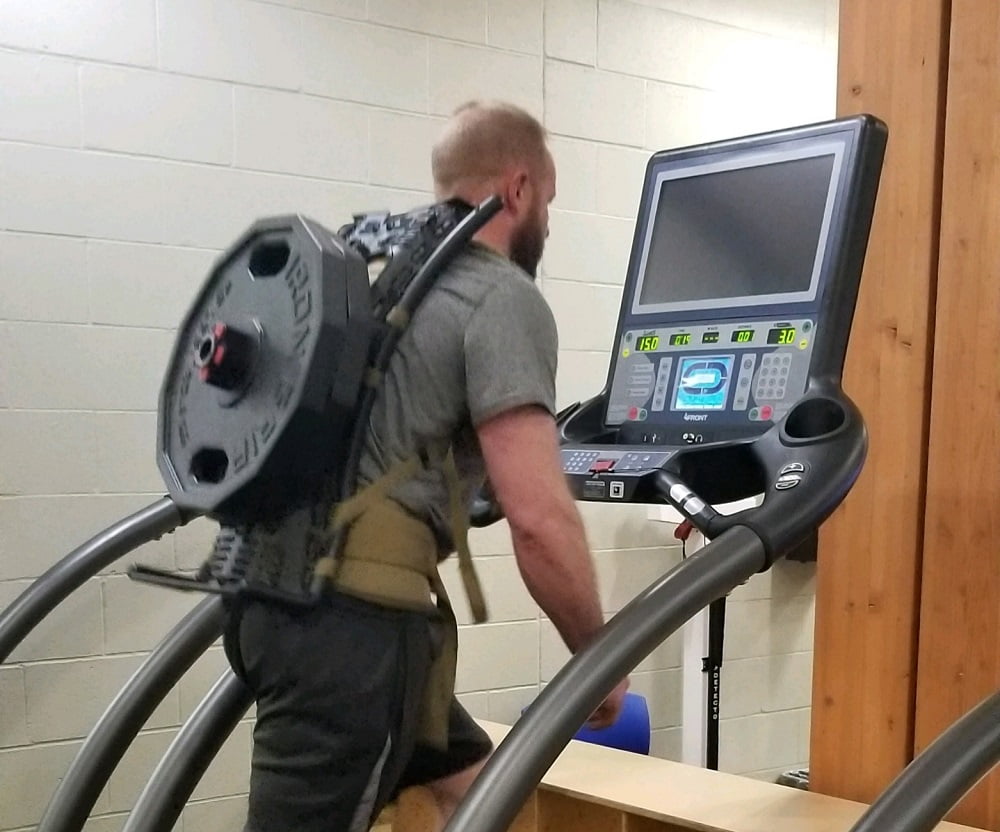 I use it on stairs when I don’t have access to a hill or treadmill. I also started out doing pushups, squats and lunges, then added calves and planks. I have a lifting strap similar toTRX and found that doing the exercises with the pack greatly enhanced quite a few of the exercises, including rows and curls. I even found that I could do pullups with it, although I would recommend that you start light in doing it and move up slowly as I have known a few people who have gotten bad tendentious doing weighted pull-ups.

The Atlas Trainer has held up very well with the exception of the waist buckle buttons which seem a bit flimsy. When carrying the full 90 lbs, they popped out on occasion. Time was an issue, so I just purchased a new set of buckles from the local sporting goods store for less than 10 bucks and haven’t had the issue again.

The only other complaint is that it carries weight so well that it is a shame it can’t be loaded with more weight. Overall, it is an excellent piece of gear that if used correctly can help anyone improve their physical performance in the backcountry, or just help anyone that wants to burn calories and get into shape. 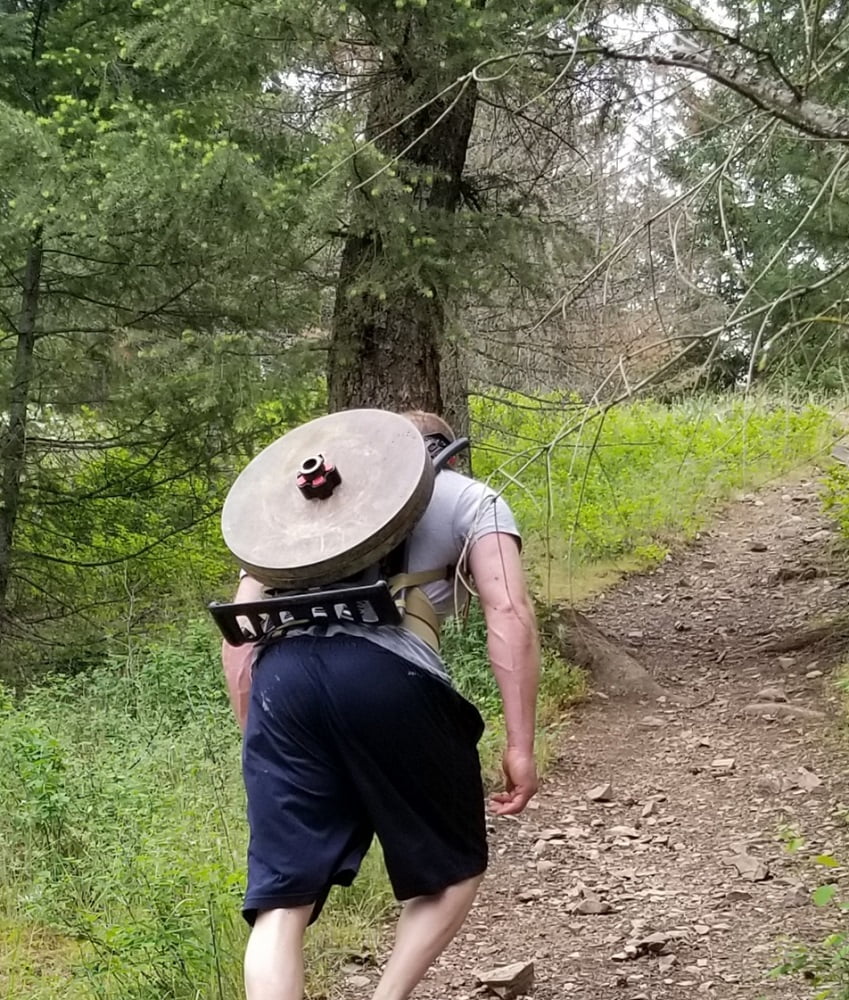 After looking at all the options that come with it, I find it to be very versatile; you can purchase a meat sling designed to attach to the frame for $37. I’m excited to try one out next year on elk and see if it packs game as easily as it packs weights.

Also, you can add a 3-liter bladder system for $59.99 that can be used with the Atlas Trainer or any of the Outdoorsmans’ packs. Since the frame is compatible with any of their packs, anyone in the market for a new pack would be getting an extremely good value; from what I’ve read from reviews and heard from people who use their other packs they seem to be a top-notch hunting pack.

One last feature I just tried out the other day and liked is the built-in V-notch rifle rest. Located at the top of the frame, it is meant for shooting from a seated position. I found it provided very good stability and feel that it could come in handy when shooting over brush or other similar circumstances, I often find myself in when needing to shoot in a pinch.  Give the Outdoorsmans’ Atlas Trainer a click and see it it’s right for you. Order yours here.

You can comment on this review or ask Jim questions here.