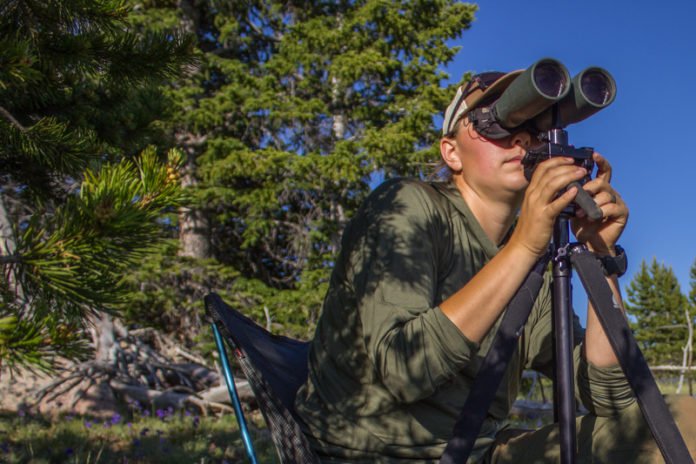 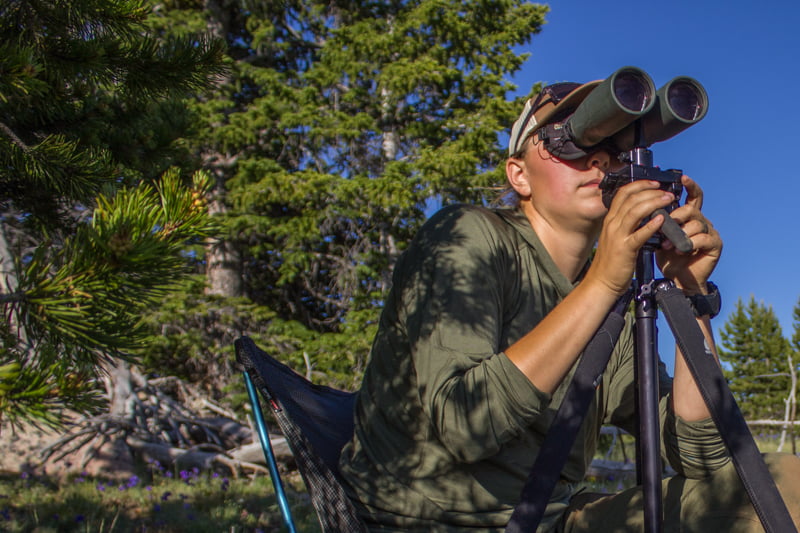 Tripods and tripod heads are often overlooked when putting together gear for the season. The unfortunate thing about that is without a sturdy platform, your high dollar optics aren’t reaching their full potential. The first piece to a good system is using the correct tripod head. If your tripod head isn’t rated for the weight of your optic, glassing can turn into a headache and marginally ineffective. I’m a user of heavy optics and was in need of a good tripod head.  When Outdoorsmans released their new Fluid Head, I did the happy dance. See website for more.

I will start by saying that the Fluid Head isn’t for everyone. The main focus when building the head was to handle heavy optics in a light weight package. They have certainly accomplished that task with a 23 ounce head that is rated for 20+ pounds, per their website. A unique feature is the ability to change out the jaws, which hold the tripod plate in place. You can change to accept Arca-Swiss or Manfrotto plates, allowing for flexibility if you already have a number of compatible plates from your previous tripod head. 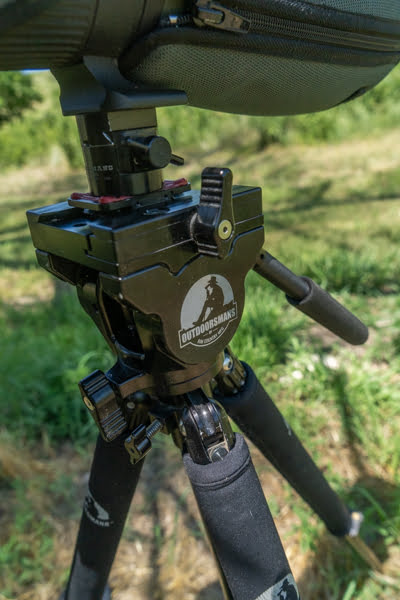 The largest, and about only, downside to the head is the price coming in at $699. Yes that’s expensive, but if you need a lightweight packable head that can handle a set of Kowa’s, a Swarovski BTX, large spotting scopes with digiscoping gear, and cameras there has to be some kind of sacrifice. Like sleeping bags and a plethora of other gear, when the weight starts to decrease, the price typically increases. The closest comparison to this head I’ve used is a Manfrotto 504.  While similar in size and cheaper, that head weighs over six pounds. The Outdoorsman Fluid head paired with their medium tripod legs weighs just under four pounds as a system, two pounds less than the Manfrotto 504 head itself.

One Head For Everything

I’ll preface by saying my needs are slightly different than most, which makes this head more valuable to me and the price more bearable. I own a media business where we don’t only film hunts, we also film weddings and things alike. Being able to have a packable head that’s extremely smooth allows me to have one head for everything whereas before, I had my “mountain” head and my “in-town” head. Having two or more heads previously I was always swapping plates out for another brand and it was very inconvenient. 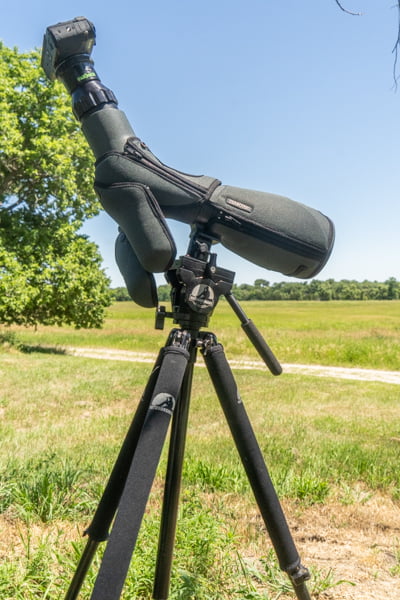 Once the Outdoorsmans Fluid Head arrived I immediately noticed the construction. Made of billet aluminum, this head is extremely durable and built to withstand some beating. I attached a camera with my largest lens and started using it around the house. The fluid tilt and pan are silky smooth allowing for clean panning, something the Outdoorsmans Pan Head won’t quite do. You can find my review of the original Pan Head here. While the Pan Head is my go to for glassing, if you need an adjustable truly fluid pan and tilt, the Fluid Head would be a better option for you.

The handle is short and can be moved to any of four corners on the head for your preferred location. I like mine placed in front of my spotting scope or binoculars so the tilt knob is on my left. This lets me have one hand on the handle and another controlling the tilt tension. I used this head extensively with a 95mm Swarovski ATX spotting scope with a digiscoping camera attached. It handled the weight great. Even with lighter weight ten power binoculars, the head was smooth and not jumpy. One issue with heads rated to handle heavy weights is that lighter objects can actually hinder performance and the pan can seem jumpy. I didn’t notice that at all with the Fluid Head. 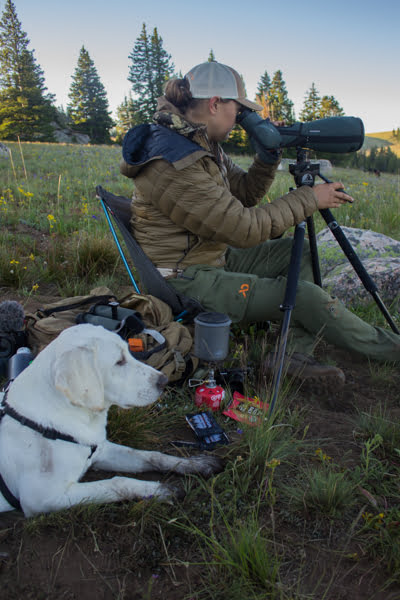 The tilt and pan knobs are designed so they can’t unscrew themselves and fall off the head, something I’ve had troubles with using other brands. The tilt knob was tough for me to get used to. There isn’t a lot of twisting room between loose and tight so a small amount of loosening the knob can equate to a large adjustment. That’s something I have gotten used to now and no longer even think about. I also wish the tilt would lock tight. Even with the knob tightened all the way down, you can tilt the head with minimal effort if you wanted to. I’ve never had the head move on its own when tightened down, so it’s really a non-issue but I wanted to address it. The pan does however lock tight and doesn’t budge.

Adapting to the “Old” Outdoorsmans Plates

One worry I had about the fluid head was its inability to directly accept the original small Outdoormans plate that all of their other heads use. So I came up with a hack to make it work. I got an Outdoormsans quick release adapter and screwed the Arca-Swiss style plate onto the adapter. This gave me a quick adapter from the original heads to the Fluid Head so I never have to change the plates on my optics to fit each head. If you have the larger heavier optics like Kowa’s or a BTX, I would recommend using an Arca-Swiss or Manfrotto plate designed for the Fluid Head. They are larger and will probably handle the bigger optics better. 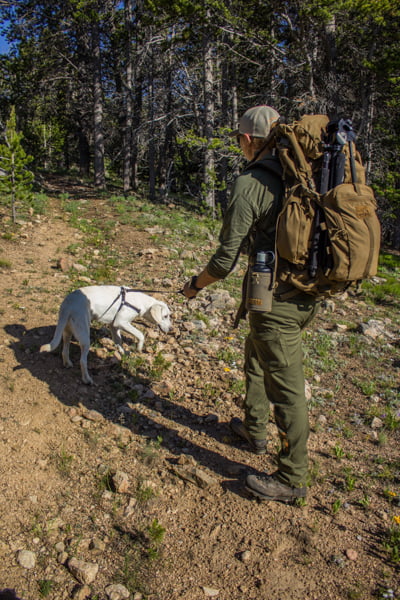 In closing, I’d like to mention again that this head isn’t for everyone. If you’re a guide, videographer, or just do a lot of glassing with big optics, then the Fluid Head was built for you. I’m very impressed with the Fluid Head and I’ll be using it on my hunts along with my professional film career for a long time.

You can find the Outdoorsmans Fluid Head here.

You can comment on this review or ask Jordan questions here.