Early the next morning we buttoned up camp, loaded our packs, and started our 12 mile heavy haul back to the truck to get the meat to the processor in the local town.  Six hours later we were at the truck taking the meat to be processed.  We spent that night at our good friend Steve’s.  We were in the “neighborhood” being just 90 miles to the south.  Steve was an excellent host and practically rolled out the red carpet for us.  We swapped stories and pictures of our previous weeks endeavors, as he just returned from a successful dall sheep hunt in the Brooks Range.  The next morning after dropping off the meat, we started the 12 mile hike back in to camp, had dinner, and played some more cards in the tent before turning in for the night.

Late the following morning, we packed camp and began a 7-mile slog across the tundra from our caribou camp to where we planned to start looking for sheep. We setup our sheep camp early in the afternoon next to a little creek. We prefer to camp next to a water source if given the chance.  It was nice to finally lay eyes on the mountains that we had been looking over with topos for so long, especially knowing we still had over two full days to scout for a legal ram prior to the season opener.

Once camp was set, we climbed 1,000’ to look into an adjacent drainage for sheep.  No sooner we had gained the ridge line than we began seeing rams.  At least three of the rams we saw were legal, and one was exceptional.  This ram was at least 2” beyond full curl on his right horn and his left horn was 6” beyond full curl.  We soon named this ram “Corkscrew.” 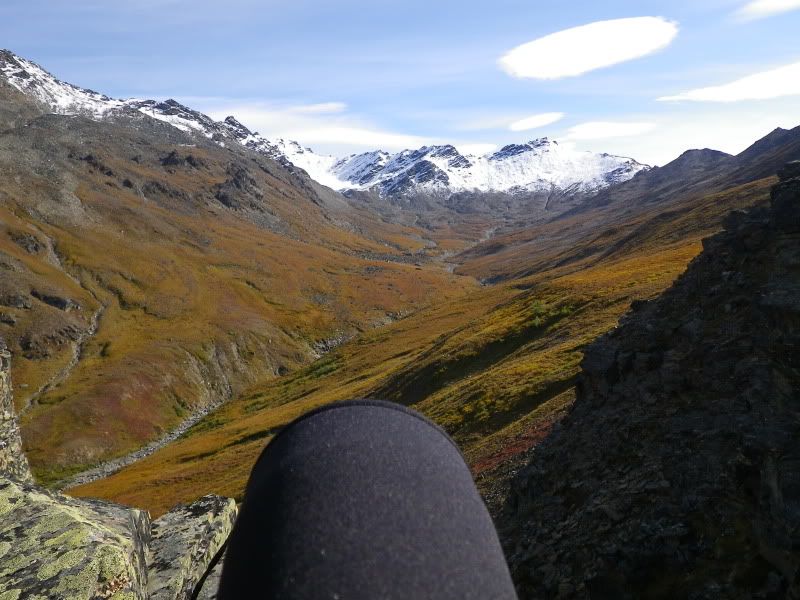 A look into the valley of rams. 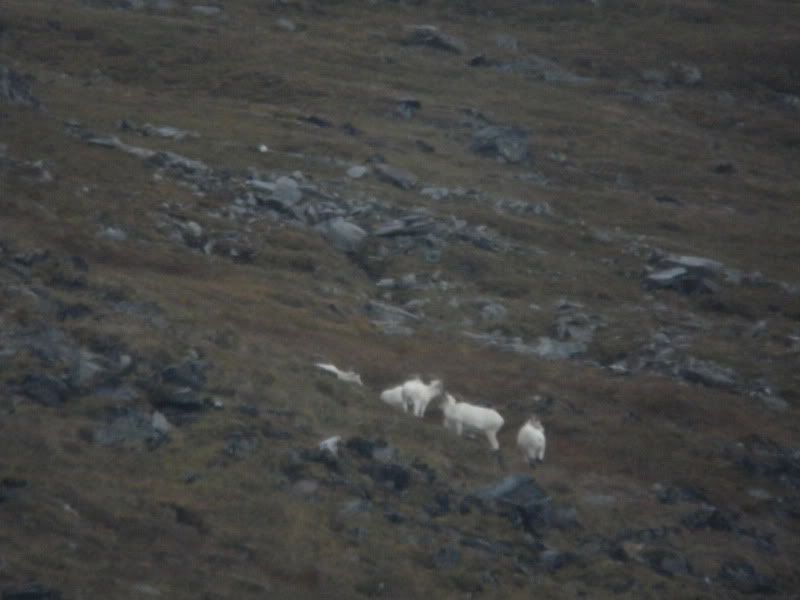 We had hiked nearly 20 miles from the truck and right into a bowl full of rams just 2-3 miles from our camp.  It was tough getting to sleep that night, as I really wanted to just go straight back to that bowl again and watch the sheep.  However, with two full days of scouting left before the season I felt it best to explore valleys/bowls to the west prior to committing to go after the first sheep we saw.

The following day was beautiful. We gained 2500’ to look into the valleys and bowls to the west of our camp. We saw 50 or more ewes and lambs and even a few small rams early in the afternoon.  However, nothing really caught our eye compared to Corkscrew, who we knew was in the bowl to the east where we had scouted the previous evening. 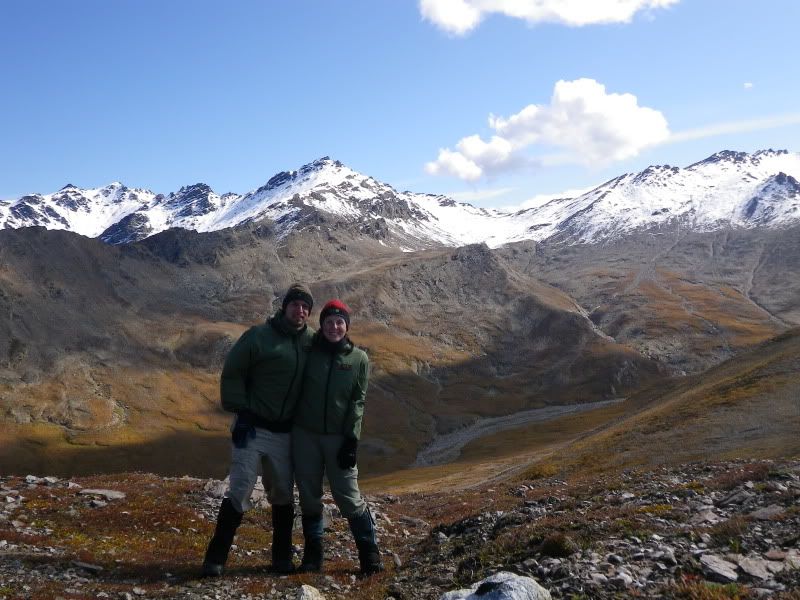 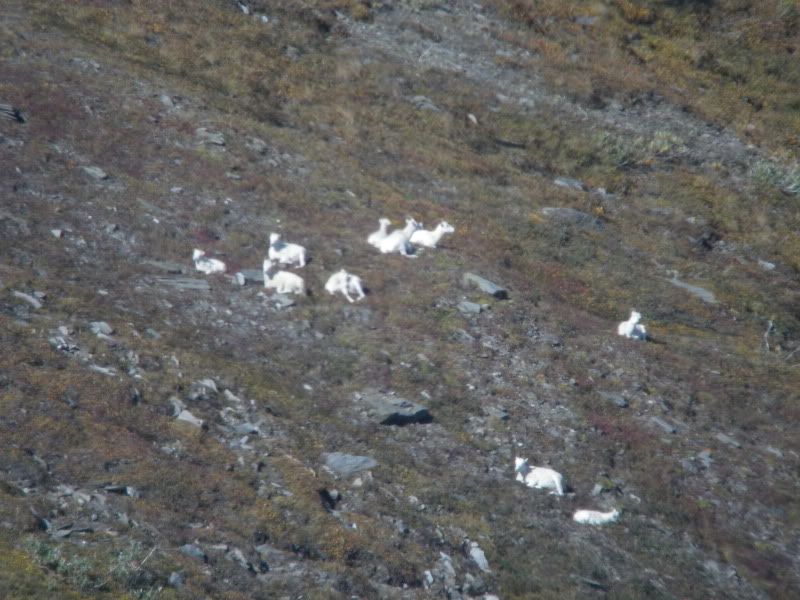 Descending the ridge line that evening as we headed back to camp, Becca pointed out a lone sheep in the crags across the drainage.  A quick look through the spotting scope showed a ram with an impressively wide set of horns.  It was clear he was broken on the right horn, but tough to tell if it was broken or just worn on the left.  The ram clearly wasn’t full curl and with so many rams the bowl just over the ridge I didn’t really give him another thought.  Turns out that a week later I would be helping my buddy pack this very ram off the mountain. 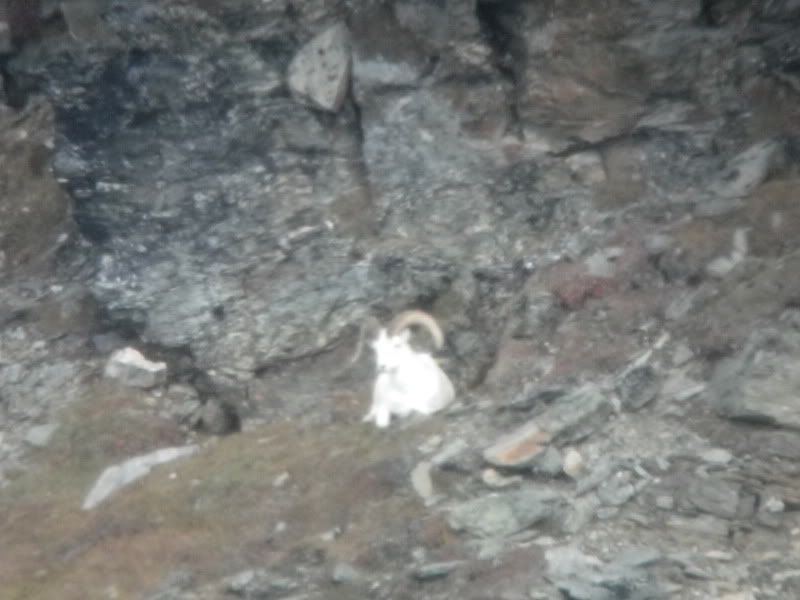 Back at camp that evening, we decided we would spend the final day of scouting in the original valley where we had spotted all the rams two days prior.  In order get the most out of the one day we had to hunt together, we planned a 3:30 AM wake up for opening morning.  This would enable us to get into the bowl under the cover of darkness and avoid all the eyes that were in the valley.

Knowing we had an early wake-up call coming the following morning, we both took the liberty of taking long naps basking in the sun on the rocky ledge, in between taking turns at the spotting scope.  It was a great way to spend a day of “scouting” with only 2,000’ of vertical and 2 miles of hiking, while the rest of the day was spent relaxing, resting, and looking over rams. 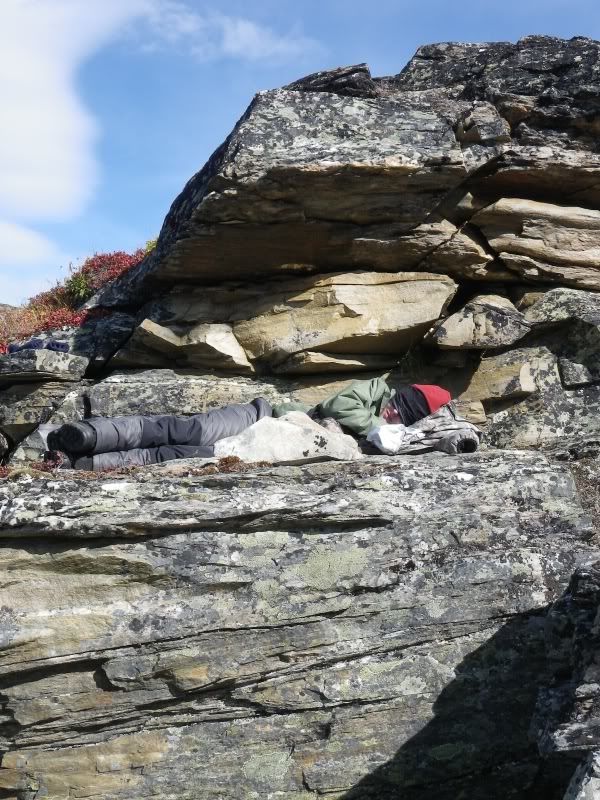 Becca taking her turn sleeping on the rocky ledge.

We headed back to camp early so we might be able to crawl into bed a little sooner than normal and try to get an extra hour or two of sleep.  I would be lying if I said I slept very well that night.  With thoughts of rams filling my head, I could hardly wait for the next day to come.

The alarm on the GPS went off as scheduled, but it didn’t matter as I was already wide-awake, and quickly jumped out of our bag into the cold, crisp, clear morning.  Becca, though not as much of a morning person, humored me in my excitement and followed suit.  As dawn approached we were working our way into the drainage and started seeing white dots on the mountains around us.  We continued up the drainage to where we believed the rams would eventually come down. We had watched their pattern throughout the previous days.  We waited for a couple hours and looked over several smaller rams, but the larger rams including Corkscrew never showed themselves.

This is where, if I were a more experienced sheep hunter, I may have just waited. But I was getting antsy and ready to see the legal sheep I knew were in the area, so we began climbing to where I believed they were bedded.   As we worked our way up into the bowl I finally saw three rams, two of which I knew were legal 450 yards above me in the snow.  However, they had seen me before I spotted them.  White sheep in the white snow are difficult to see, especially in the heavy sleet.  The rams wasted no time in climbing up the steep snowy slope.  My heart sank knowing I had just blown any chance for Becca to see me harvest my first ram.  I knew I was coming back to the area on a 10-day hunt with some buddies just three days later.   However, I couldn’t help but think about Becca’s months of physical therapy and hard work regaining her muscle, as well as the 120+ miles and nearly 20 days we had both just spent in the field chasing after sheep. She had earned a ram as much or more than I had and now she wouldn’t get to see it happen.

Watch Next Week for Part 3 of Luke and Becca’s Exciting Hunt!