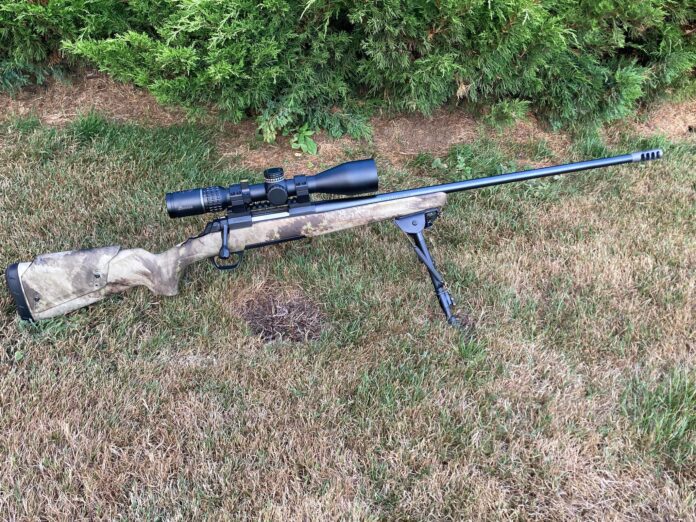 What in the world is a 6.8 Western? Do we seriously need some other variant of a short magnum .270 caliber chambering, or more variants of a .270 at all?

I wasn’t looking for a .270. In fact, I’ve never owned anything in that caliber. I’ve always been one of the guys that said things like, “30 caliber or bigger for elk”. I’ve run the higher horsepower chamberings such as a 300 Win Mag, 300 Weatherby, 300 RUM, and 30 Nosler with heavy-for-caliber pills. Hit ‘em hard and watch them fold in the scope!

After years of burning out magnum barrels target shooting, long-range rock shooting in the mountains, and some hunting in the mix, I went on the lookout for something smaller to put the mileage on. The expectation was better barrel life and, of course, less consumption of precious gunpowder! Lighter weight and low recoil would be a benefit here as well. Some added justification was that my wife and 17-year-old daughter would really enjoy shooting something a bit smaller. At least that’s what I told them! 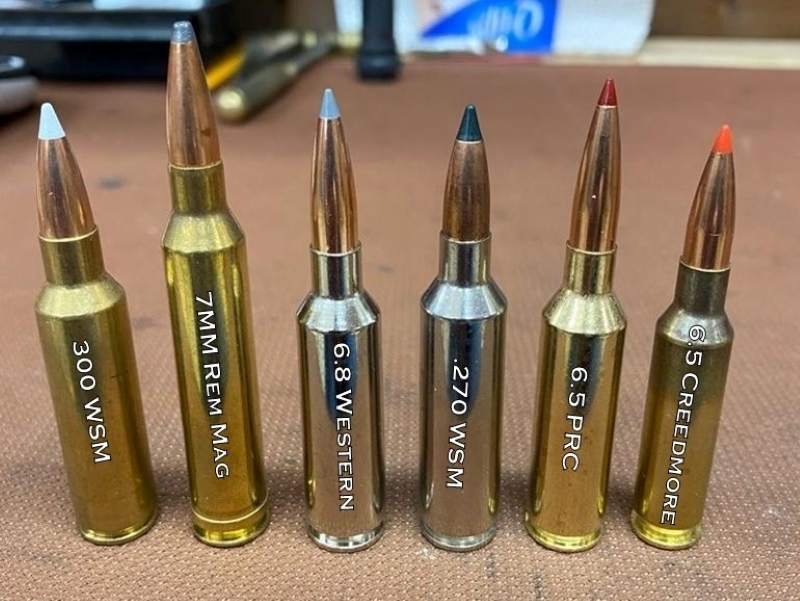 As I looked around and explored options, initially, the 6.5 PRC seemed to be a great direction to go in for the chambering. As with most all the bigger purchases I make, I went into full research mode. Despite leaning towards the 6.5 PRC at first, I couldn’t get past the undersized chamber issues so many had encountered with the PRC. Are there fixes? Sure. However, I wanted simple, problem-free, and gunsmith-free on this project. The accuracy goal I had in mind was 0.5 MOA with handloads and not having to “work” on the rifle first.

This was right around the time that the 6.8 Western was released. Having caught the press releases by Browning/Winchester, the 6.8 had certainly perked my interest, so it was only natural to draw up the comparison between the 6.5 PRC and the 6.8 Western. As a long-range shooter and hunter, my interest in bullets would only be in heavy for caliber, high b/c pills, specifically Berger.

“Hey?! Why not the all-new 7PRC to draw a comparison?”

I find the 7PRC to be a healthy step above the 6.8 Western in performance and feel that the 6.5 PRC/6.8 comparison is fairer and more realistic.

The numbers below are pulled from Hodgdon’s reloading data on their web page. I’ve also included a Quickload prediction for a more apples-to-apples comparison with equal chamber pressures…

NOT TO BE USED AS LOAD DATA! 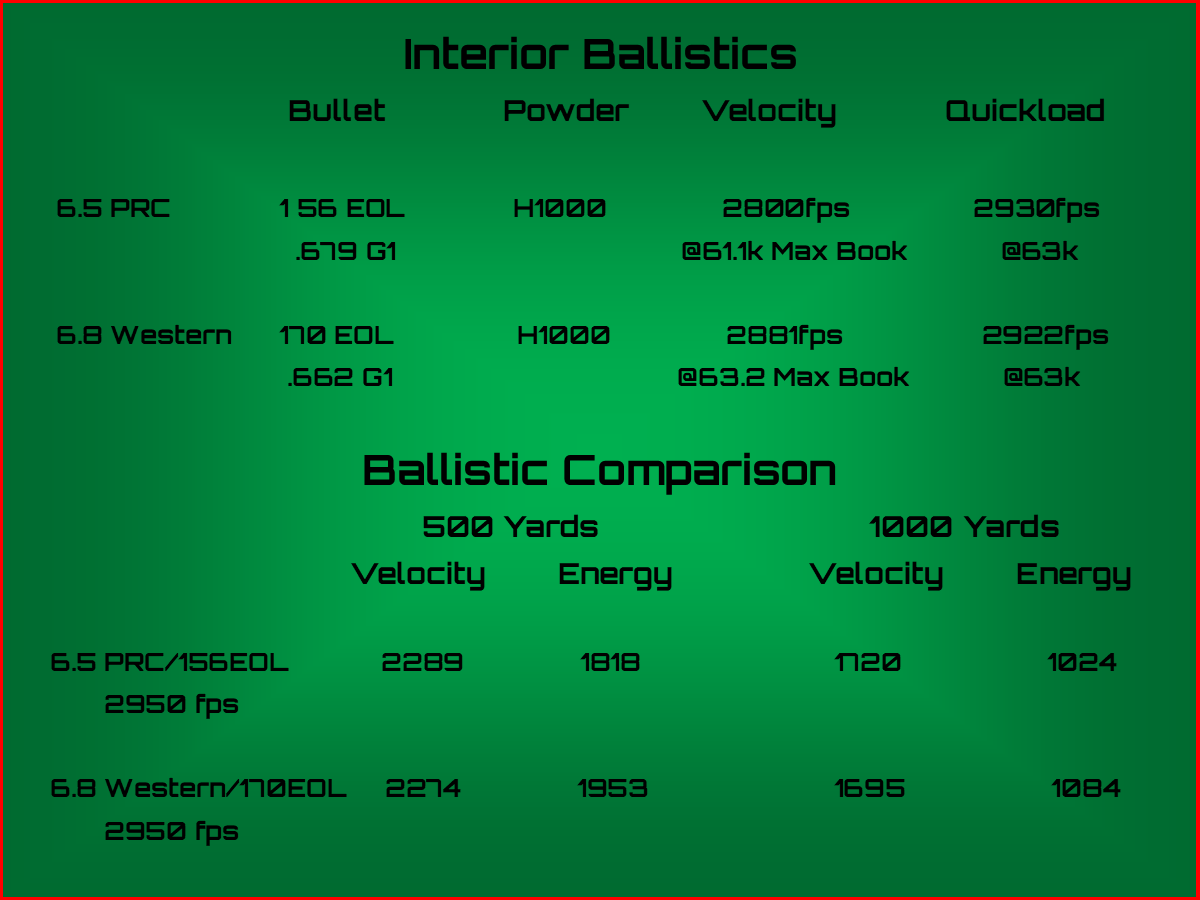 In all fairness, faster velocities (2950-3000fps) are being achieved in the 6.5 PRC using higher energy powders such as Vihtavouri N565. Unknown Munitions lists their Mayhem series ammunition in the 6.5 PRC/156 EOL as producing 3015fps. By the same token, in using powders like N570, the performance can be bumped with the 6.8 Western too. In strictly a ballistic comparison, the 6.8/170 EOL combo would have an advantage in the kinetic energy department on those longer shots. The extra bullet weight can also be viewed as cheap insurance, especially when elk hunting.

Let’s talk specifics on the 6.8 Western. The 6.8 Western is a collaboration between Winchester and Browning. They have essentially taken a .270 WSM, shortened the shoulder datum up by .080”, and specified a 1:8” rifling twist rate. The logic behind this was to allow for long, heavy-for-caliber, high b/c bullets to still feed through a short action while appropriately seated in the neck for maximum powder capacity. This is not possible in SAAMI configurations of a .270 WSM, of which the 6.8 Western is very similar to.

With a limited budget for this project, I decided that I wanted a high-quality factory gun that would have a great chance of shooting 0.5 MOA or better with handloads. I didn’t want something where I would need to bed the action or do a bunch of work to have good potential. The choice of factory rifles in 6.8 Western at the time was between Browning and Winchester. From previous good experiences using the Browning X-bolts, that became the obvious choice for me.

For those who don’t wish to hand load, below is a list of factory ammo offerings from Browning and Winchester:

For reference, the 170EOL at .030” jump is at an overall length of 2.981”, perfectly fitting in the X-bolt detachable magazine. All velocities were taken with a Labradar. 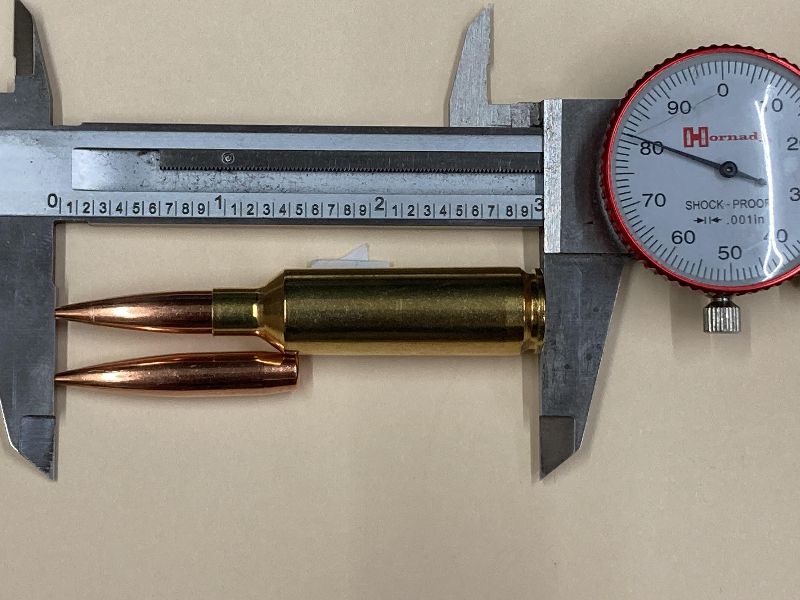 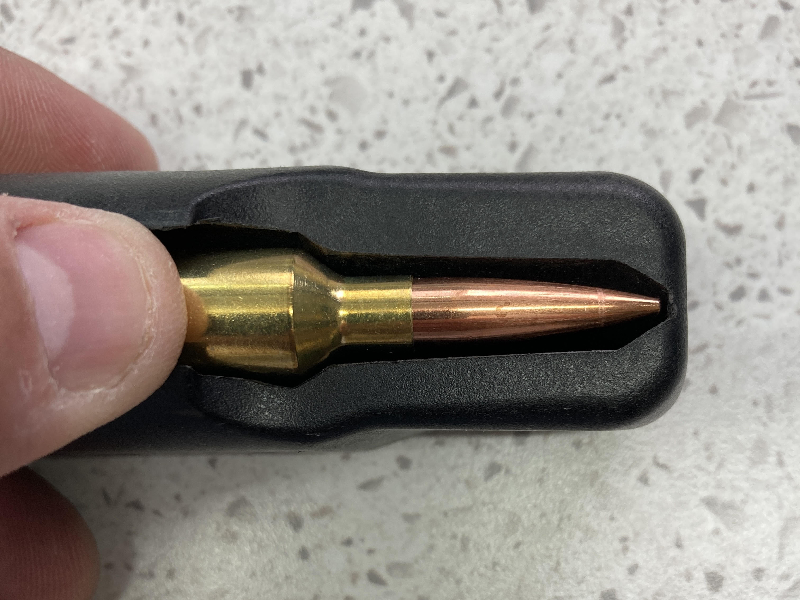 I began pressure/speed testing with Ramshot Magnum powder as I had quite a bit on hand, and Quickload showed it to provide great speed, and case fill ratio. It produced nearly 3000fps before seeing any signs of pressure on the case head. I roughed in seating depth at .088” using the deeper node between .080” – .100” jump. There was a narrower, less forgiving node at .035” jump that I opted to avoid. I discovered after thorough powder testing that Ramshot Magnum was too inconsistent and unpredictable in this application/combo.

I had groups in the .3s to .4s at times and others in the 1 MOA range that included a point of impact shift. It was clear that I needed a very stable powder in this light sporter barrel to keep harmonics under control. 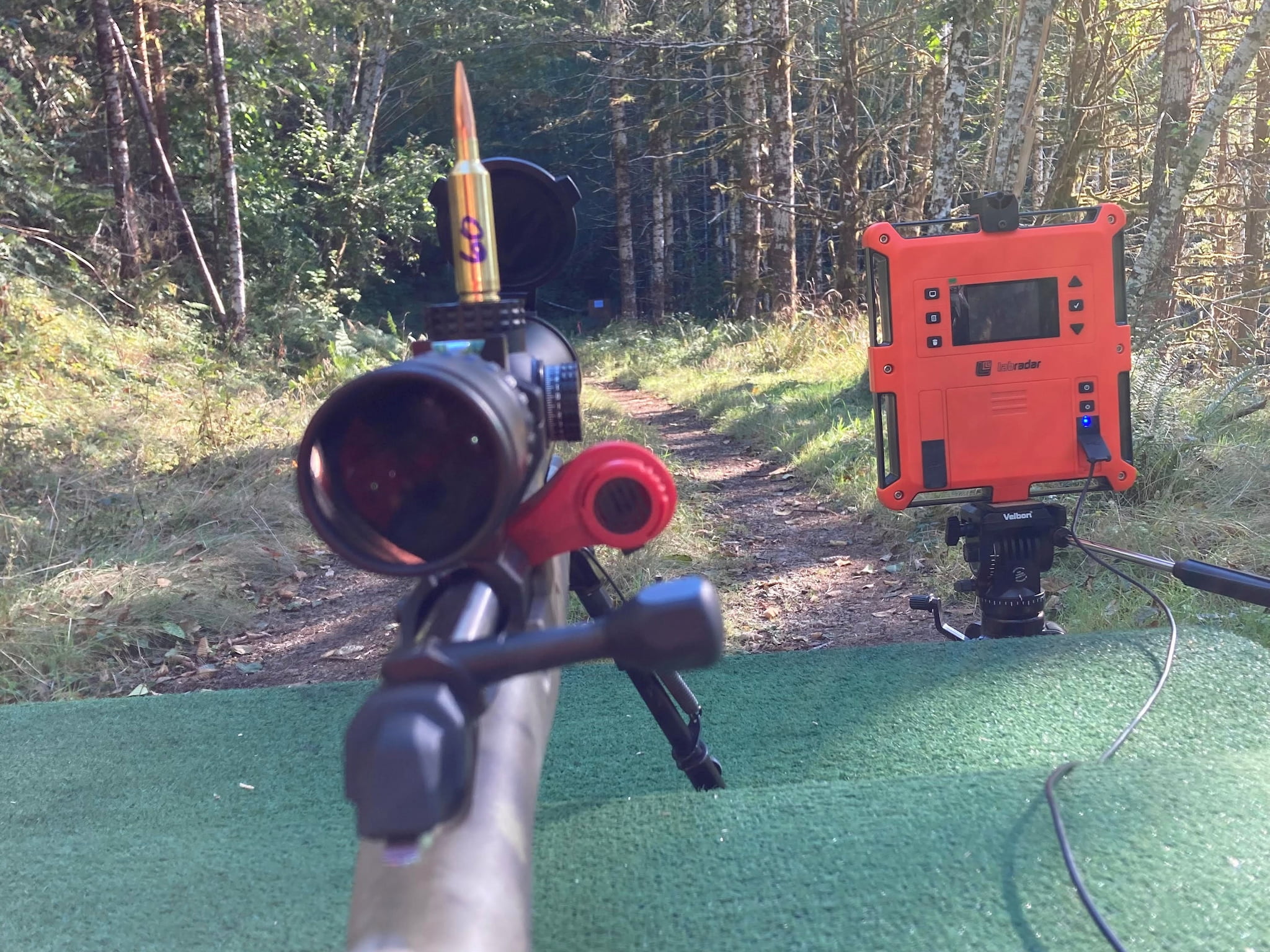 I managed to find several more pounds of H1000 to add to my small supply already on hand. Using the previously established optimum seating depth of .088”, I started again at speed/pressure testing in 1-grain increments. I found pressure at a velocity of 2970 fps. Backing off a couple of grains, I performed another OCW test and found a stable spot between 65 and 65.4 grains where groups were small and point-of-impact change was minimal. Velocity was in the low 2900’s. Groups repeated in the .5 to .6 MOA range using 65 grains. ES was higher than desirable initially, but I was able to tighten this up with some work to improve neck tension consistency.

Throughout all of this testing, including pressure testing, I did not loosen a single primer pocket in this Winchester brass. I did have some split cases on the shoulder and neck after a couple of firings due to quality control in manufacturing. Much of my brass is now over ten firings per piece due to annealing every firing and bumping shoulders only .001-.002”.

Using my Kestrel 5700 Elite and the custom drag model for the 170 EOL, I started at 1,047 yards. 2 shots impacted .75 MOA low. I made a correction using the new Sight Scale Factor (scope tracking correction) that was released in the latest Kestrel firmware update. With using a CDM and solid velocity data from the Labradar, this seemed to be the right “fix” for the drop correction. I moved to 1,348 yards where data tracked true. The 6.8 made two consecutive impacts on a 5” rock on shots #2 and #3 at this distance. On a later date, my wife and I both were making shot after shot impacts on a 1 MOA rock at 750 yards.

Only one animal has been taken with this combo so far. My daughter Emily took her first blacktail buck at about 75 yards. My son was by her side at the time and said that he had never seen an animal hit the ground so hard as this one did. Dead instantly. The shot was placed behind the shoulder on a quartered away angle which broke the offside shoulder. Bullet fragments nearly exited, but not quite. The performance was perfect and exactly what I’d expect from a heavy-for-caliber Berger. 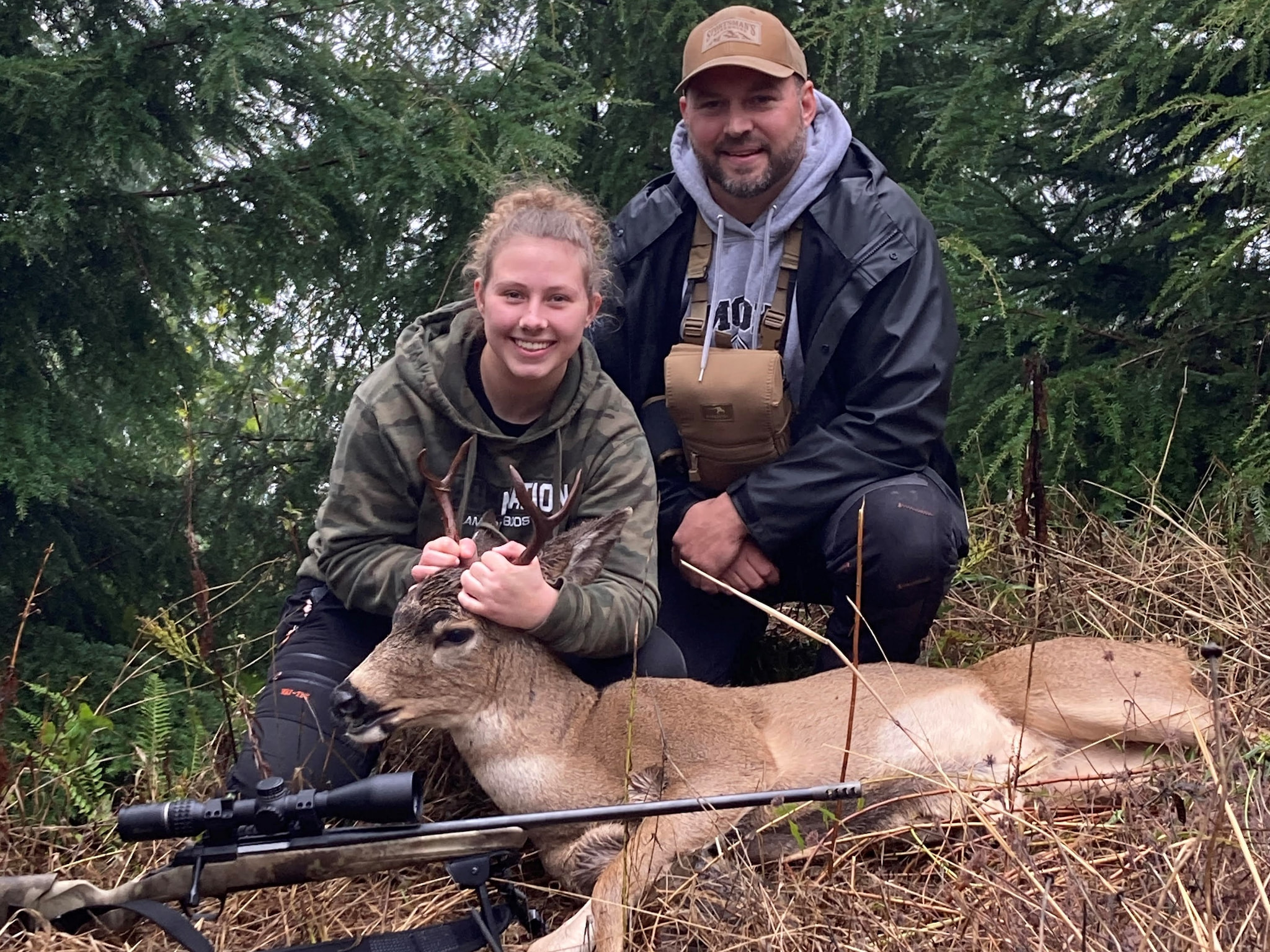 Browning/Winchester did a great job designing this cartridge and spec’ing SAAMI correctly. With long, heavy for caliber bullets, the boat tail/shoulder junction is optimized, throating is optimized, and twist rate is appropriate for full stabilization and ensuring the b/c reaches its full potential. These rounds will still feed properly in the X-bolt short-action rifle. This rifle is an absolute pleasure to shoot and packs a lot of performance out of only 65 grains of powder.

Is it better than the 6.5 PRC or even the new 7 PRC? I think that’s a little harder to quantify and will be highly subjective among shooters. For me, I’d be comfortable using this combo on anything in North America (short of brown bear) to distances of 700 yards. It seems to fill the gap well between the “deer cartridges” and larger magnums. If there are cons, I did not find any with this project.

At the date of this article, there are several factory ammo choices fairly available for the 6.8 Western making it attractive to non-handloaders. I feel that it has a future as a cartridge, especially if we see companies like ADG or Peterson come out with high-quality brass offerings. There seems to be almost a cult following among .270 caliber hunters/shooters, and I’m convinced this rifle hit that sweet spot for performance and cartridge design in this caliber. For any further questions about my experience with this cartridge or more details on equipment, join the discussion thread below.

Comment on this article or ask Jesse questions here.