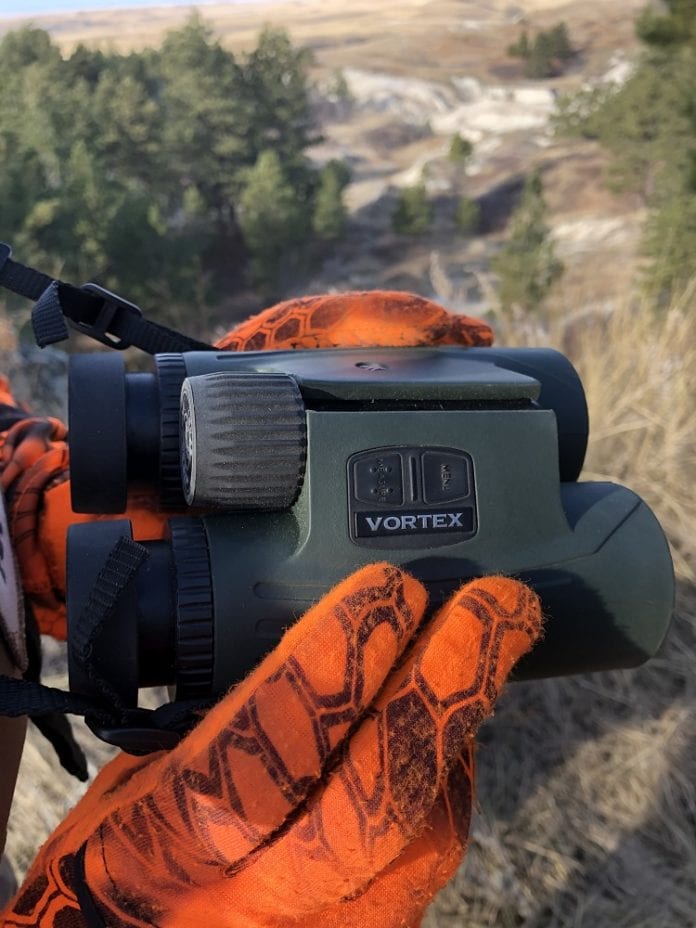 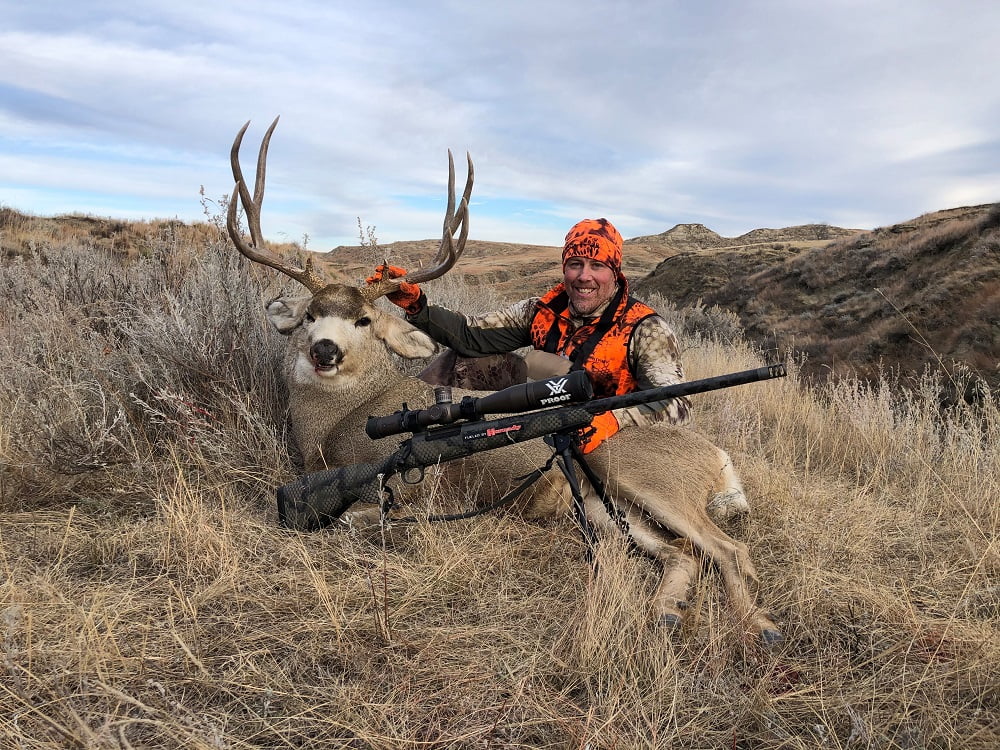 I have always wanted to have a laser rangefinder/binocular optic, but I never made the jump. Prices were usually too high, and the bulk wasn’t something I wanted. When Vortex recently introduced the Fury HD 10×42 laser rangefinder/binocular, I budged.  This is a  rangefinder built into a 10×42 HD binocular! The price point is much lower than that of the Swarovski and Zeiss options. This is a very welcome addition and has many hunters interested.  Having a rangefinder and binocular built into one comes with obvious benefits. Let’s dig down into these, and see what is really offered. More info available on the Vortex site here. 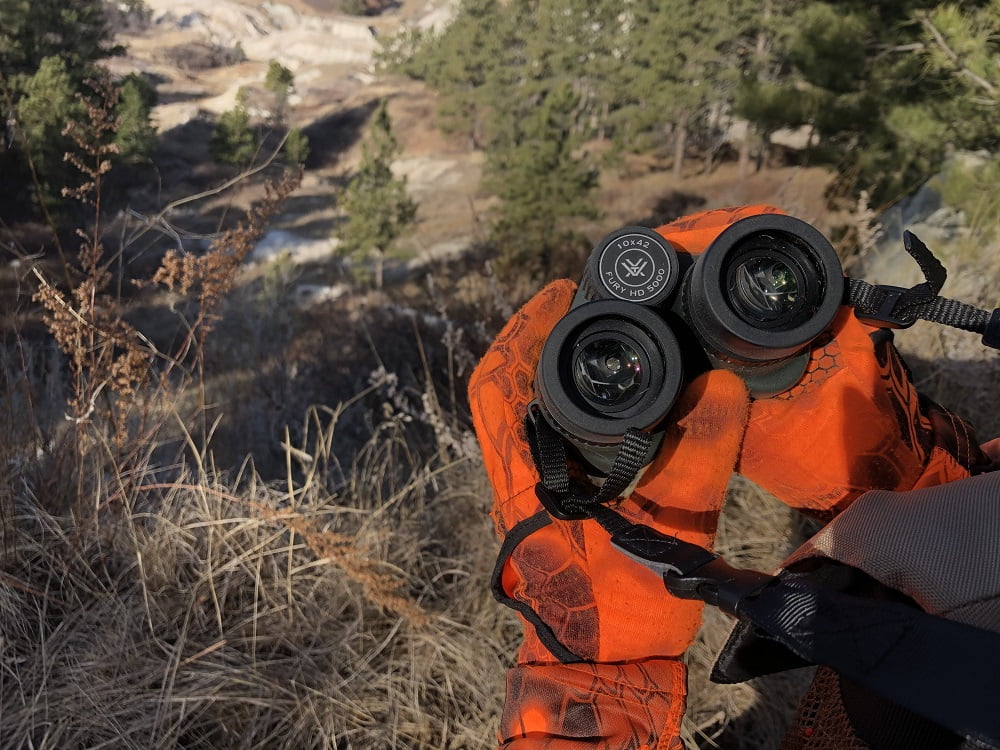 Upon taking them out of the package I was excited to see that they included a bino harness! That usually is the next purchase when buying binoculars. I wondered if this harness would be adequate to what I am used to using? The normal eyepiece cup protectors are included  to help protect your investment. Initially, I noticed the extra bulk, but that is understandable due to having a rangefinder built-in. After all, I have only ever used conventional binoculars in the past. I remembered though that I’d no longer need a separate rangefinder. 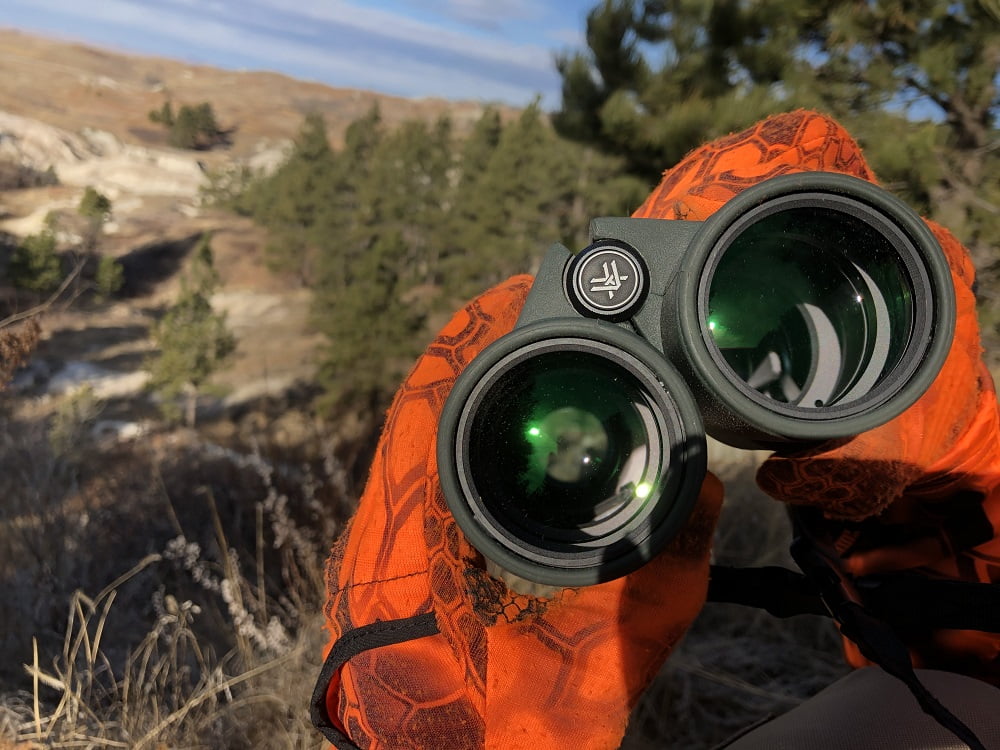 To start with, the Vortex Fury HD has High-Definition quality lenses that stem from high-density, extra-low dispersion (ED) glass. The ED glass isn’t directly advertised as a feature for this optic. But we do know that the Fury has the same optical quality comparable to that of the Viper HD binocular line. What this means for the end-user is an optic that keeps color fringing to a minimum and gives you high contrast to be able to see your target more clearly without distortion. This all adds up giving benefits of high resolution and true color renditions across the platform due to the additional prism-specific dielectric phase correction coatings. That is a mouth-full! I have to admit that even I don’t know exactly what it means other than the glass is top-notch!

With all optics, we want to be able to remain glassing for longer periods of time especially in the early dusk and late dawn when critters are most active. With Vortex’s XR lens coating for maximum light transmission, low-light glassing is possible. You can see earlier and later in the day due to these properties. If you plan to go swimming with these, you are covered as they are waterproof as well with a rating of IPX7! Which means they can be submerged up to 1 meter in water for 30 minutes.

At 31.8 ounces they are not near as heavy as I thought they would be and are relatively compact coming in at 5.75” x 5.9”. They fit my hands well and offer ease of operation. The buttons are easy to access one-handed leaving your other hand free.

At first, I was thrown off by the dual ring diopter adjustments on each eyepiece. Upon further inspection I come to find out the left one is for focusing for various eye strengths and the right one is for reticle/display focus. It was a bit different to focus than a conventional binocular. I quickly learned to close my left eye first and focus with the center focus wheel, and then adjust the diopter for the left eye with my right eye closed. The last step is to adjust the display with the right diopter ring. Once set, they were very clear. 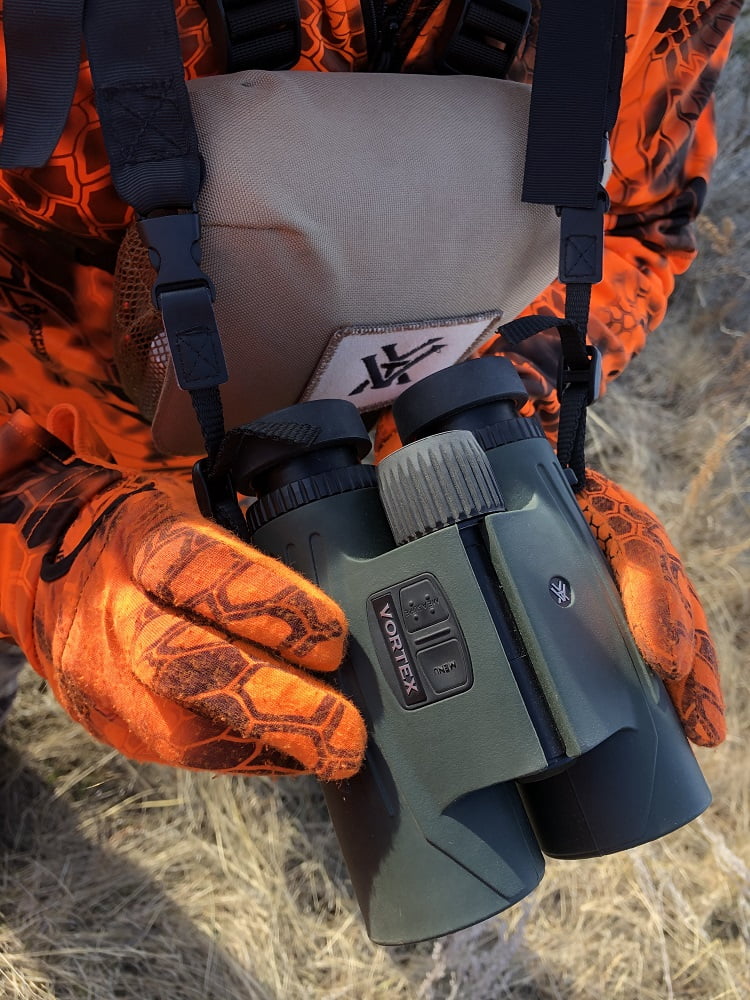 I was excited to test the Vortex Fury HD’s out in the field. While messing around with them from a high vantage point, I was able to get distances past 4000 yards on surfaces such as large rocks and cliff faces. It is hard to get long distances on deer without being rock solid but I was able to get distances on deer much farther than I would ever think about shooting with a rifle. I picked up a range on a large mule deer buck at 2314 yards! Close distances were not a problem either. I read ranges closer than I would shoot, even with a bow!

The illuminated LED display was also easy to see and read. It was easier to read than their Ranger 1000 that left me struggling at times. The LED readout is only visible when you activate the button on top, so interference while glassing wasn’t an issue. You can also change the output of the LED readout to fit your desire. It has the Horizontal Component Distance (HCD) mode as well to get proper angle compensation. This has become a pretty common feature across all rangefinders. You can also keep it on Line of Sight (LOS) as well if you prefer. The Scan mode works great with fast readout at all times. 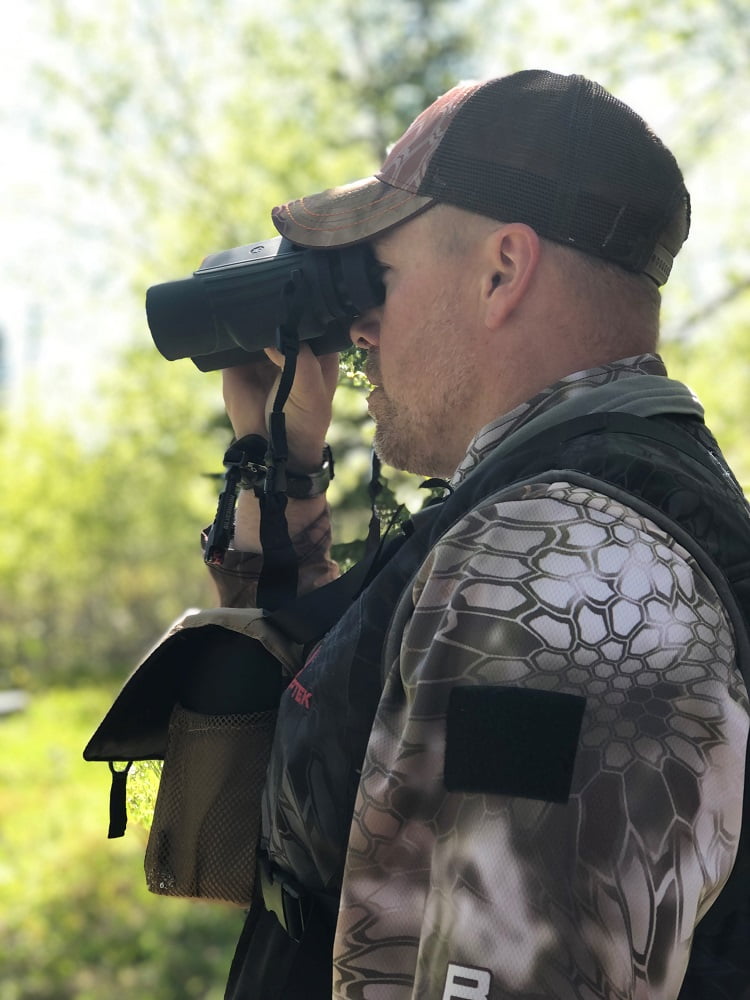 While at the Total Archery Challenge (TAC) at Terry Peak, SD I got plenty of interest from other shooters who wanted to give them a try. I switched out with a gentleman who was using a pair of Swarovski EL Range binocular/rangefinder combo. The weight of the two seems comparable as well as the glass for my eyes. I couldn’t see spending double the amount on the Swarovski’s, but to each their own. The guy who used the Vortex Fury was also quite impressed and said he might switch due to liking the feel of the Vortex over the Swarovski. Again, each to their own. I have a hard time justifying paying the larger prices and Vortex has answered that for many with the Fury! 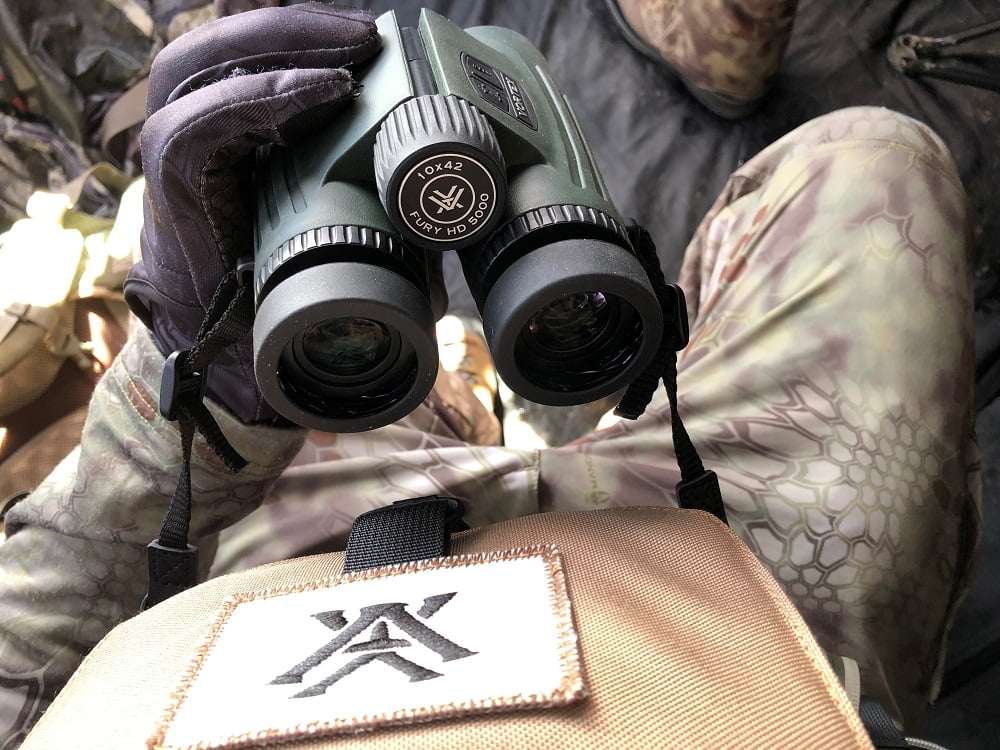 I first used these on turkey hunts where I was concealed in a blind and loved having one optic to do both glassing and ranging. I found myself messing around with them to the extent that I missed a gobbler sneaking into my decoys. While in a blind or stand they will work much better while archery hunting.

But, one drawback to these while archery hunting, is the bulk while getting a range. Sure it cuts down on having to have a separate rangefinder and binocular but when I really noticed the issue is when I was in closer ranges to critters during a stalk. Having to raise a binocular to your eye to get a range on a weary buck or bull will usually send them running. It is much easier to get away with movement when using one of the smaller Vortex Ranger rangefinder models. I did have a buck pick me off because of this and I am confident that it would have been much easier to use the Ranger in this scenario. I like to keep that rangefinder to my eye while seeing in real-time with my other eye. Much less chance of being spotted when inside The Red Zone.

One irritation was that the LED readout stayed on a bit longer than I would like while glassing. After getting a range I would have to wait for it to timeout to go off to resume normal glassing.

I had a November rut hunt with a rifle planned.  It arrived with temps well below zero. I was interested to see how the laser rangefinder would perform. In the past, I’ve had issues with slow or no readouts in frigid weather. I am happy to say that the fast readout and reaction of the laser rangefinder remained unchanged.

For me, the Vortex Fury HD is perfect for rifle hunting, when I’m not so worried about the movement of a larger optic. On this particular hunt, I found a buck a ways off and wanted to get ranges figured out for a stalk. I was able to range him at/around 2314 yards. By using the Pythagorean Theorem, I was able to figure out that the buck would be at 276 yards for a shot once I got there. To my dismay, he was gone by the time I arrived on location. Sure it was only 2314 yards, but it took nearly three miles of hiking to finally get there.  By then he had his love pushed off somewhere else and I had no luck relocating him on that hunt. A week later it was a different story! 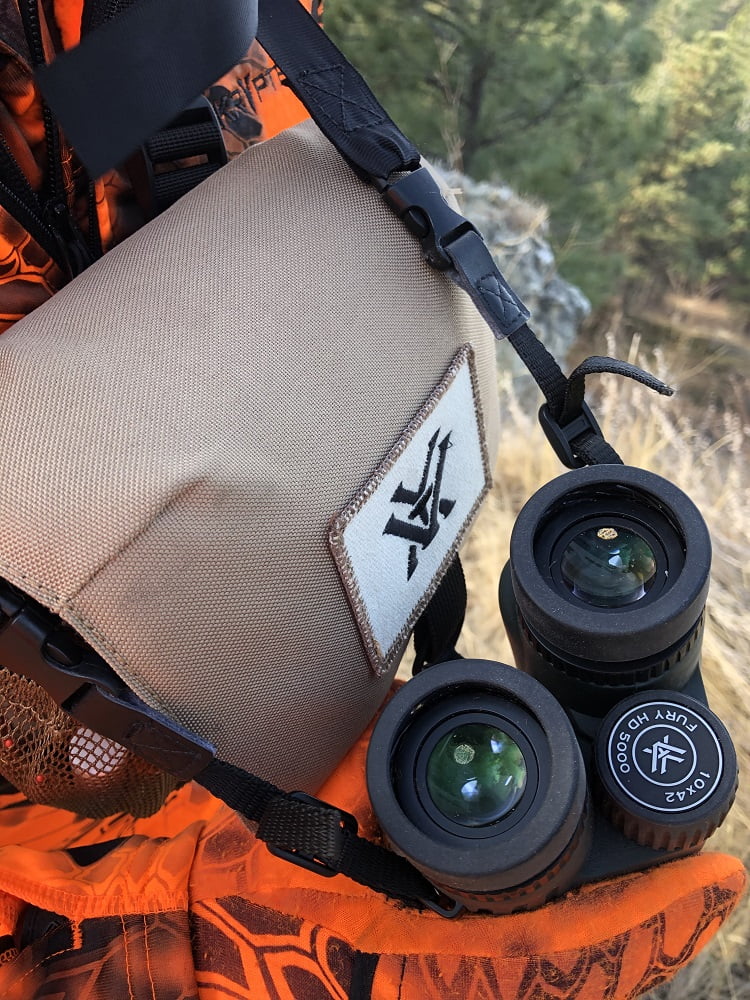 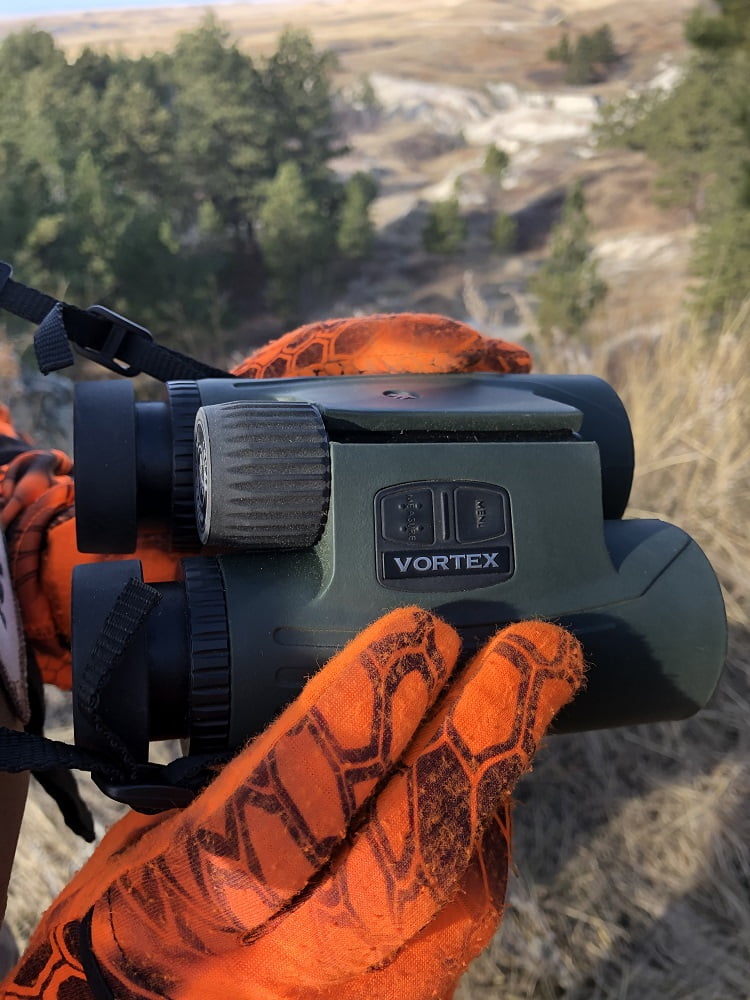 I had a hard time finding things that I didn’t like about the Vortex Fury HD. Only minor things that didn’t change the success of being able to successfully use them. I think they did a great job at offering a laser rangefinder binocular combo that won’t break the bank like many other manufacturers, but also offers the same great results. This is a hit in my book and I am very happy that they came along with these. The one thing I hope they offer in the future is an option of a 12×50 in this same setup. That would get my vote as I love that combo over the 10×42. Vortex has combined the two technologies not only successfully and even flawlessly, answering the demand that many wanted. A quality piece at a very affordable price point! Order yours here.

You may also enjoy these other optics reviews.