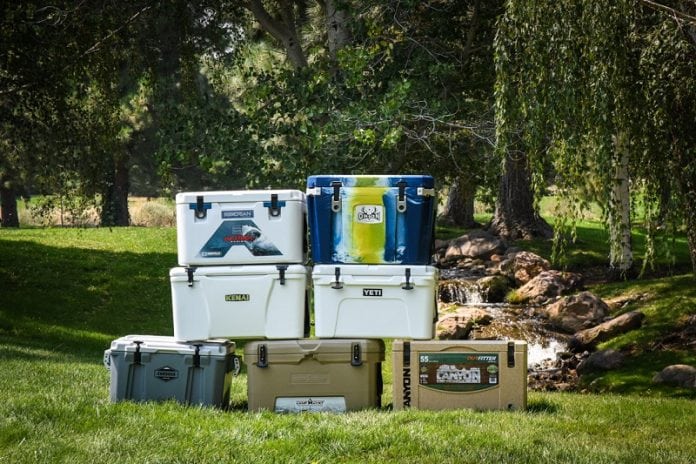 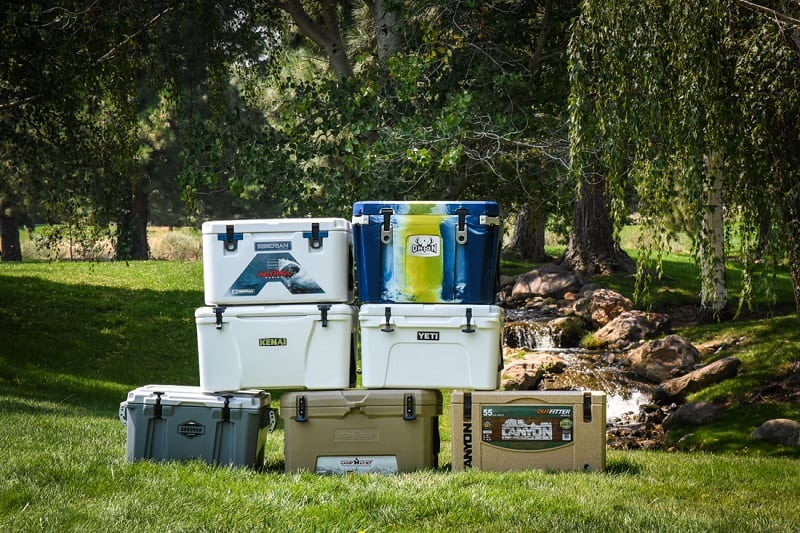 Over the years, my infatuation with roto-molded coolers has grown deeper, and my quest for finding the best leads to yet another Rokslide cooler showdown (see other years’ showdowns at 2015, 2016, 2017). For 2018, I lined up seven of the leading brands to find out which holds ice the longest. This year’s test is simple: pre-cool the coolers, load them up with ice, and see how long they last. The weather couldn’t have been better for this test as the temperatures were hovering around the 100 degrees mark the majority of this showdown. I placed all of the coolers on a southwest facing aspect next to a brick house where they’d take a good beating from the blistering hot Nevada sun. Surface temperatures were over 145 degrees on the Orion cooler during the peak of the day! That is some severe punishment. Before we get into the results, I’d like to do a quick run through on each cooler to show you what you get when you invest in one of these high-end roto-molded coolers. 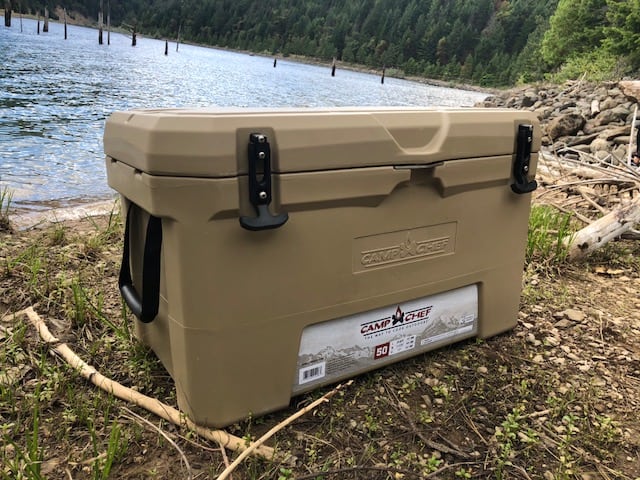 Camp Chef is based out of Utah and is known for outdoor cooking. When I saw they came out with a cooler, I had to get my hands on one as their reputation for a good product would surely carry over. This cooler is the heaviest in the showdown (could be a good thing or a bad thing) and shows some serious beef. The hinges are your standard cooler hinges but very tight. I wouldn’t expect your four-year-old to be able to retrieve your favorite beverage for you with this cooler. The drain plug is very large (2”) and easy to open. It is also tethered which is nice to eliminate the possibility of losing it when you need it most. This cooler finish is easy to scratch through, but the color hides any imperfections. Included is a wire basket to keep items out of the ice or water. I first saw Siberian’s Alpha series coolers when they launched last year at Western Hunt Expo, and I was impressed with the thought put into this lineup. My favorite feature is the feet. They are reversible so you can have hard plastic which will slide in and out of your truck easier or a softer rubber so it will not slide at all. I like to put the hard plastic on the non-drain side and the soft rubber on the drain side. That way I am only lifting half of the cooler when I go to slide it. The handles are anodized aluminum and very easy to open. The drain plug allows for slow draining by twisting one revolution or you can remove the plug all the way for maximum flow.

This is the only cooler in the test that comes with more than one accessory as well. It comes with a cup holder, divider, wire basket, and a security bracket. Your color choices are granite and white Cordova is new to the market and another Western Hunt Expo find. Again, another cooler I was very impressed with the thought put into the design before production. My favorite feature is the upside down latches. They protrude from the body allowing you to access the inside of the cooler when it is jammed in the back of your truck. The handles also protrude out making it easy to lift out of your truck when you have hunting gear stuffed around it. I also like that the handles are not roped like most other coolers giving more control when carrying. The drain plug is simple in design and exterior is easy to clean with its smooth finish. The only color offered at this time is a two-tone gray. Grizzly has been around for a while and makes a quality product. They recently introduced the Kenai 45 which differs from their Grizzly lineup in many ways. Right off the bat you will notice a different latch design which is an improvement. They are one of the easiest to open out of all of the coolers in the showdown. The sleek exterior finish makes it easy to clean, and they sell a blue ice divider that is pretty slick. My backcountry is coming out in me when I get excited over a product that serves more than one function: a divider and it also will keep ice longer. The drain plug is easy to use, and this cooler comes in a plethora of colors. 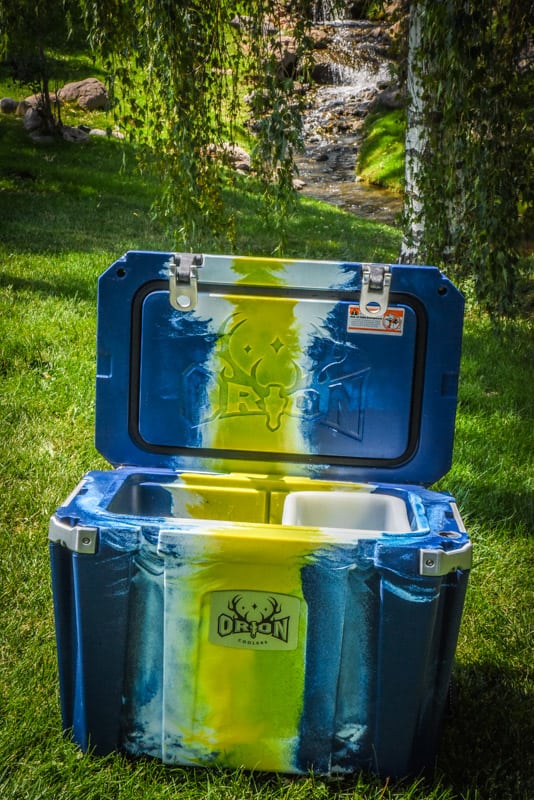 The Orion 45 is the most eye-catching cooler produced. Their wild color schemes are attractive and their logo embossed in a non-skid cushioned top is equally as eye-catching. When you open the lid, you can tell this cooler is made with ice retention in mind by its thick lid and sides. The latches are easy to open; however, you must use two hands to open the lid as you need to keep both latches free at the same time. This could be a problem if you are holding something you want to put in the cooler. The drain plug is easy to use, and Orion offers a wide variety of colors. This cooler also comes with a plastic basket to keep items out of ice. Orion has won every ice retention challenge Rokslide has put on, so keep reading to see how they do this year! Yeti has built their name on making a reputable cooler, and the Tundra 45 is no different. The smooth exterior surface is the most durable I have tested throughout the years. You can throw this cooler in the back of your truck or quad for years, and it will look brand new. My biggest gripe with Yeti, in general, is the lack of quart size for the quart size you get. Most companies over-quote their actual size but when you come in under 75% of your advertised size, that rubs me wrong. Yeti is known to have some of the best customer service in the industry though, and if you go into your Yeti purchase accepting that you should get at least two sizes bigger, then they will not disappoint you.  The handles are easy to operate, and the drain plug is easy to use. The Tundra 45 is now 50$ cheaper and comes with a wire basket. Canyon has become one of the best choices when you are looking for value and performance in roto-molded coolers. The Outfitter 55 has very easy to use latches inset into the body of the cooler. The exterior is smooth and easy to wipe down. The thick lid seals tightly to the body providing long-lasting ice retention. The drain plug is quite a bit nicer than previous Canyon models. The outfitter 55 comes in sandstone and white marble. In past years, Canyon has done exceptionally well in our ice retention tests. Read on and see how the sandstone color withstood the heat.

If you didn’t follow the Rokslide Cooler Showdown on our Youtube channel, here is a link to Day 1, so we don’t spoil it for you. Also, if you plan on watching the day-by-day updates, do not continue reading as it will ruin it for you. If you would rather just cut to the chase, read on! 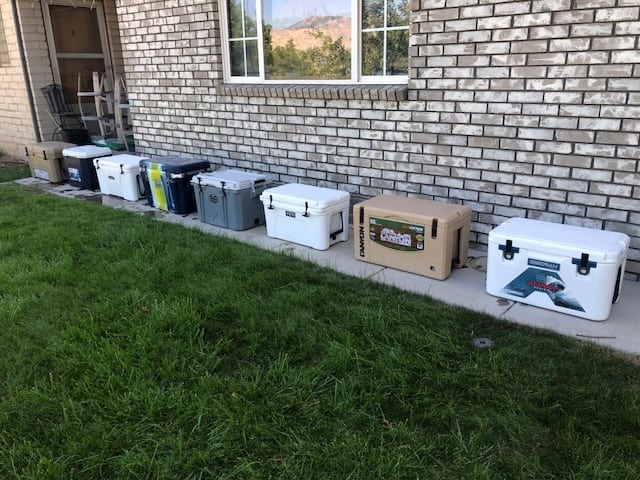 The high temp over the duration of this test flirted with over 100 degrees. Orion once again proved to be the top dog, even with the darkest cooler in the competition, holding ice until the middle of the 8th Day!

Siberian took a healthy second place while bowing out going into day 8. Canyon coolers weren’t that far behind and lost its ice sometime during that night. Yeti was the next best cooler in line and lasted 7 strong days. Cordova and their clever box almost made it that far. Camp chef lost its ice on the 6th night but held off long enough to edge out Kenai, which made it well into the 6th day.

All of these results were impressive, and if you notice, I placed a 5-day Xtreme cooler from Coleman in the showdown as well. It lasted to day 5. Below you can see the day 8 video revealing the winner.

You can comment on the Rokslide Cooler Showdown or ask Travis questions here.