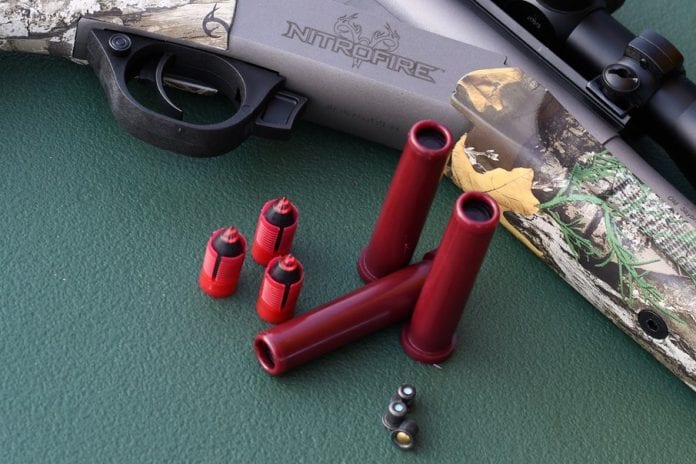 Hunting white-tailed deer during muzzleloader-only season is typically a way to spend more time in the field for a rifle or shotgun hunter. However, antique firearms and even modern inline muzzleloaders do have their frustrations and limitations. So much so, that the hassle of operating them can be a deterrent for some hunters and can be considered a barrier to enter the sport. 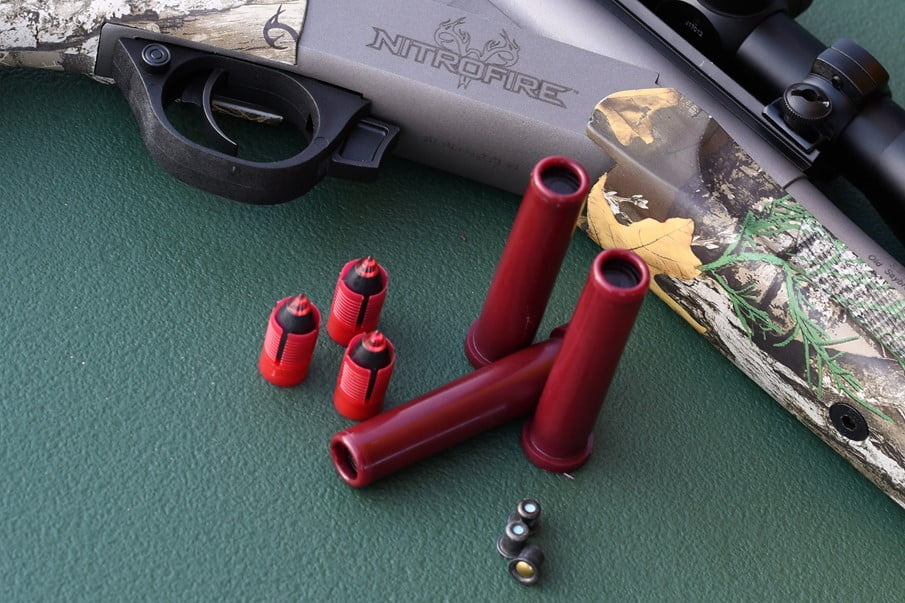 The expert engineers at Federal Ammunition knew there could be a better, easier and safer way. New for 2020, Federal Ammunition is launching a proprietary and newly-patented muzzleloading propellant system that is safer and easier to use than ever before. This revolutionary invention was completed by Federal in conjunction with Traditions Firearms to rejuvenate muzzleloader hunting. Enter Federal’s ground-breaking, new FireStick propellant capsule powered by Hodgdon’s new Triple 8 granular powder.

This article explains the product in detail, and answers many of the frequently asked questions about it. Quotes can be attributed to Federal Ammunition Muzzleloader Product Manager Dan Compton.

What inconsistencies or issues plague today’s muzzleloader hunters and shooters?

As long as there have been muzzleloading firearms, their shooters have been burdened by unreliability, inconsistency and safety concerns. That said the list of muzzleloader complaints include:

What exactly is a FireStick?

Federal Premium FireStick is a part of a whole new muzzleloader system that uses a primer inserted into an encapsulated powder charge. In other words, it’s a premeasured self-contained powder charge. 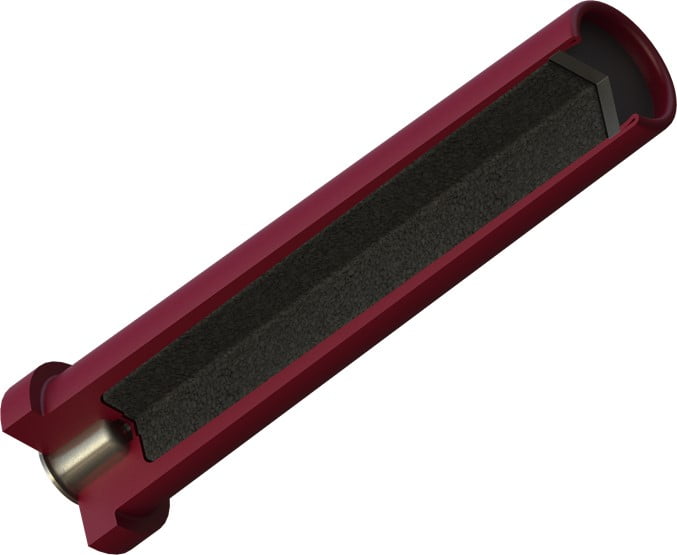 First, the bullet is loaded separately and independently from the muzzle to seat on top of a bullet shelf inside the barrel of the rifle. The break-open action of the rifle is opened. The FireStick is installed into the open breech to seat just behind the bullet shelf and seated bullet. A 209 Muzzleloader primer is inserted into the FireStick propellant capsule to charge the powder. The break-open action is closed. It’s now ready to fire, once the hammer is pulled back and the safety is turned off.

The FireStick propellant capsule requires a 209 primer (sold separate) to be inserted into it by the user to become charged. The user inserts a 209 Shotshell Primer, of their choice, to fully charge the system.

Once inserted, the primer doesn’t need to be uninstalled. The primer can remain inserted into the FireStick. Keeping the primer inserted in the capsule will continue to keep it protected from the elements or being lost.

The New FireStick system is an all-new invention. What does that mean?

A muzzleloader is any firearm into which the projectile is loaded from the muzzle of the gun (from the open end of the gun’s barrel). Most (but not all) muzzleloaders used are considered antique firearms and are not defined as a “Firearm” according to the Gun Control Act of 1968. Antique firearms such as flintlock and caplock rifles use black powder flint and steel, or percussion caps for ignition and propellant functions. 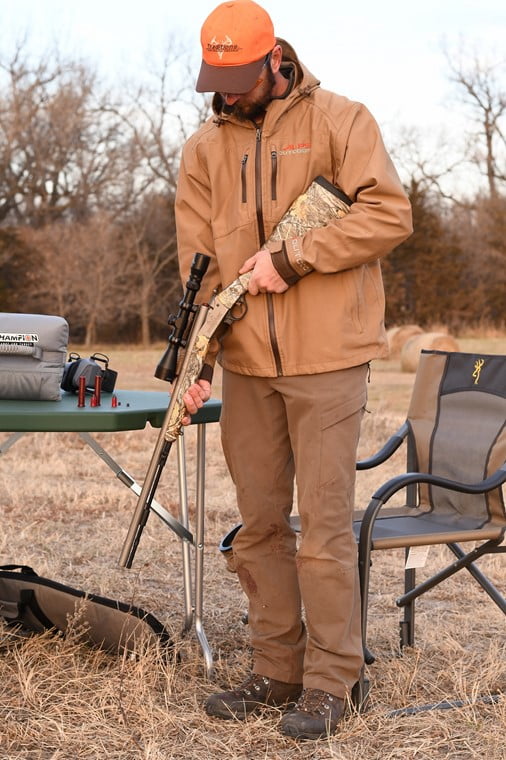 Inline Muzzleloaders are more modern due to their inline ignition and propellant system. They work by pouring granular or pelletized black powder substitute into the muzzle and pushing down a sabot or bullet to seat it on top of the propellant. This step creates a guessing game to determine if the powder and bullet are seating properly and consistently. A 209 primer is then tediously installed in the breech of the rifle via a breech plug to fully charge the firearm. The firearm is then considered loaded.

With the new type of muzzleloader rifle that operates using the FireStick System, the inline system is dramatically easier. First, a bullet is loaded down the muzzle to seat on a bullet shelf within the rifle’s barrel. The bullet shelf provides a consistent seat point for the bullet and eliminates any need for a breech plug in the rifle. The charged FireStick with primer then gets inserted from the breech into the rifle. The firearm is then considered loaded. 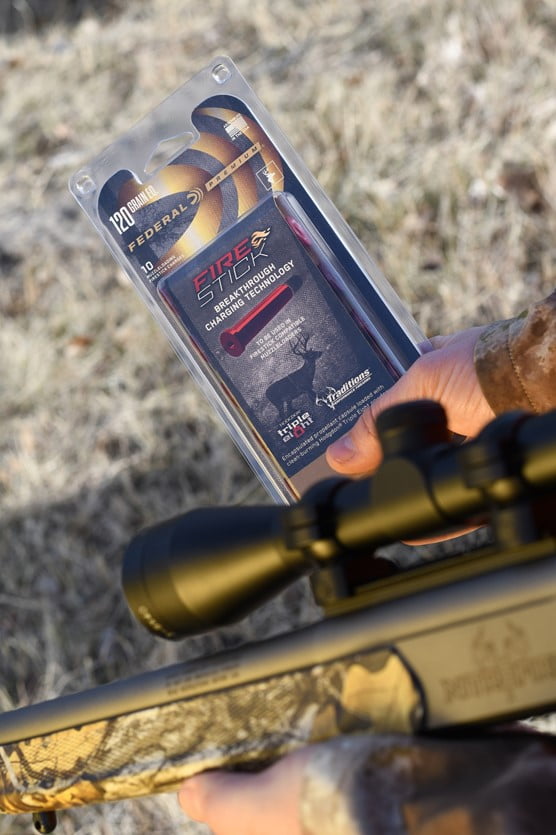 What major advantages does the FireStick provide?

The primary benefit of the FireStick is best-in-class safety. The benefits of overall better shot consistency for better accuracy and ease of use follow close behind. That said, the list of rewards this product delivers include: 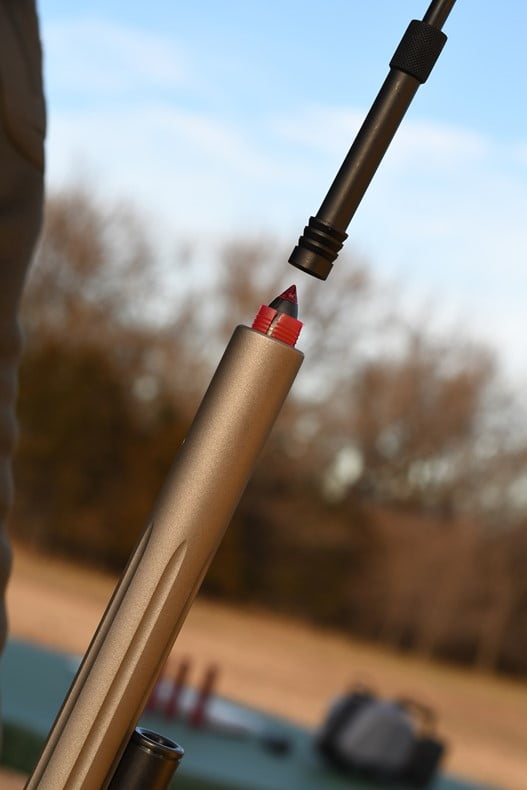 What are the available powder-load options for FireStick?

At product launch, two pre-loaded FireStick charge levels are available: 100-grains or 120-grains Hodgdon Triple 8. Users can expect projectile velocities equal to or better than what they are getting with equivalent loads from other types of in-line muzzleloaders. Learn more about Hodgdon’s new Triple 8 muzzleloader powder by visiting the Hodgdon website.

In the future, additional powder charge levels or charges using different powders could be offered. These options give shooters the ability to achieve other desired velocity options. FireSticks are sold in 10-count packs and carry an MSRP of $26.95 per pack. 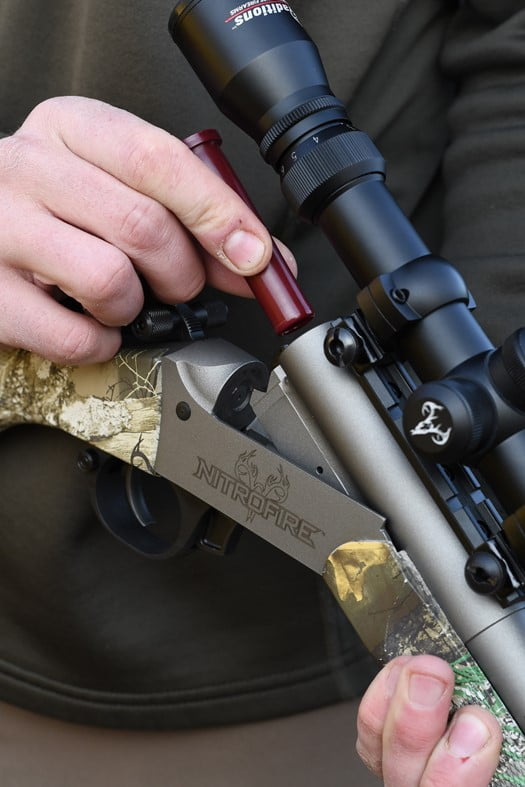 What bullets can be fired using the FireStick?

That said, Federal’s FireStick is compatible with any brand of muzzleloader bullets. The decision is up to the shooter on what bullet works best in their rifle.

What primers are recommended to be used with the FireStick?

Ignition is important in muzzleloading. That’s why Federal Premium developed the 209 Muzzleloading Primers, Part No. PMZ209. The formulation provides superior resistance to moisture, as well as hot, reliable ignition of both granulated powder and pellets in any conditions. The design reduces the excessive breech fouling—also known as a “crud ring”—typical of standard shotshell primers. They are sold in 100-count packs. However, any brand of muzzleloader-specific or 209 type primers could work with the FireStick system. 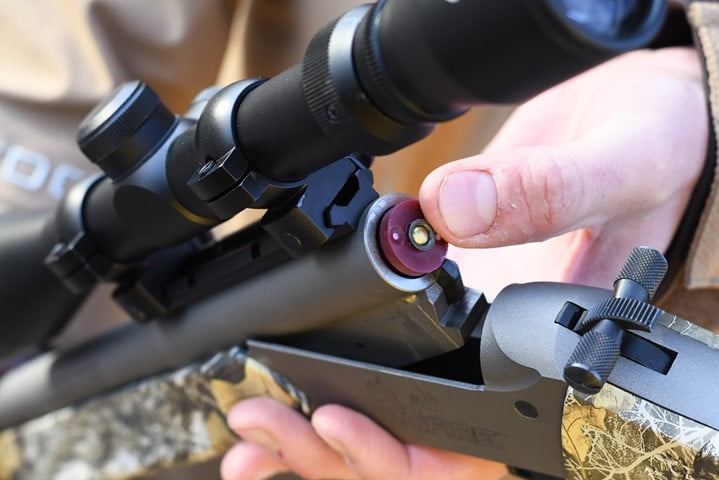 Why does the 209 Shotshell Primer need to be inserted by the consumer?

A separate primer allows the shooter to choose their preferred primer, and keeps with the traditional components of muzzleloading; bullet, powder, primer. Shipping the product without a primer also allows it to ship to dealers as powder, not ammunition.

When will FireStick products be available?

The first ship date for FireStick is targeted for May of 2020 from Federal’s Anoka, Minnesota factory. Yes, the product is proudly made in the U.S.A. Please contact Traditions Firearms for availability of their NitroFire muzzleloader rifle which utilizes the new Federal Premium FireStick.

Are FireStick Rifles easier to clean?

Yes, partially because there are less parts to clean. The lack of a breech plug in the system makes access to the breech much easier to brush clean than standard 209 inline actions. There is no breech plug to remove, pick clean, soak and lube which removes entire steps in the overall cleaning process.

The new Hodgdon Triple 8 powder burns very efficiently and greatly reduces the amount of unburnt powder and residue in the barrels. Due to powder being in the capsule, there is no powder touching and igniting directly inside of the barrel. The bullet seats on the bullet shelf, not on top of powder. All this means the FireStick system generally reduces the traditional “powder ring” black powder shooters have come to recognize in the barrel after repeated firings. A powder ring left unclean can lead to barrel corrosion. With the FireStick, there is less or no powder ring to clean, so risk of barrel corrosion is also less. The new Hodgdon Triple 8 is not designed for water-based clean-up. Using a cleaning solvent provides an effective and efficient job cleaning.

Is it possible for a FireStick rifle to accidentally fire a traditional centerfire or shotshell cartridge?

Some states do not allow inline rifles. Where will the FireStick system be legal for hunting?

Research conducted by Federal Ammunition show that many states define a muzzleloader by the requirement of loading the projectile down the muzzle manually. By this definition, many states will allow the FireStick to be legal for hunting big game during their muzzleloader seasons. However, please check your states regulations and contact them with any questions. We are actively engaging with state game and fish departments to educate them on this new and innovative product.

Can a FireStick be reloaded and used again?

No. For safety reasons, FireSticks are designed for one-time use and cannot be reloaded. 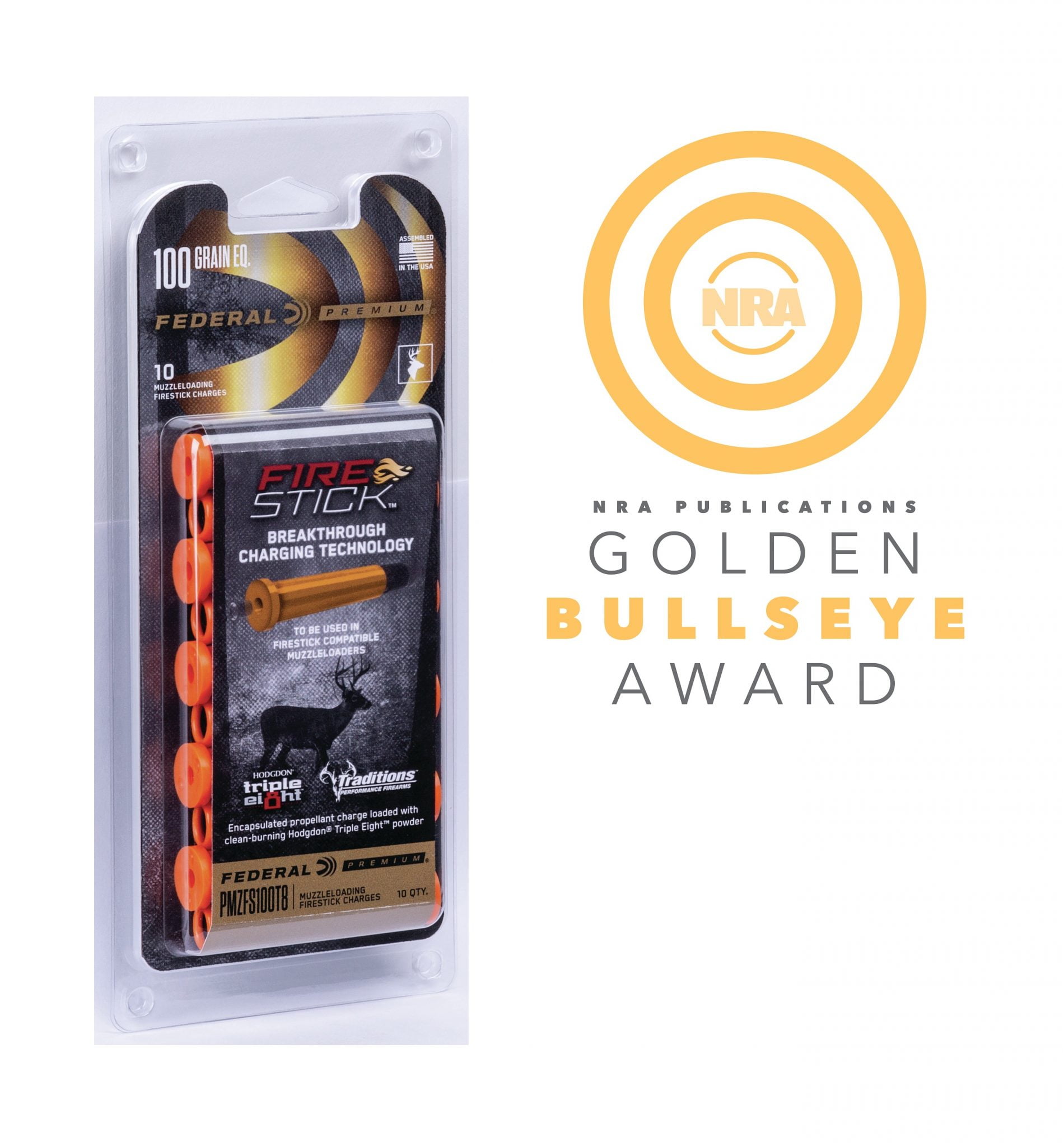 What FireStick rifles will be available?

Upon product launch, Traditions has an exclusive arrangement utilizing the FireStick system. At the time of print, one NitroFire .50 caliber rifle is available from Traditions. In addition, the company plans on launching several different rifles at various feature levels and price points to accommodate a wide range of customer preferences. Please visit Traditions Firearms for more information.

In the future, look for other major muzzleloading rifle manufacturers to release firearms using the FireStick system. Other calibers may be possible in the future as well.

Where can I buy a Traditions NitroFire rifle?

Most muzzleloading rifles are not required to be sold by an FFL dealer and do not require a background check. However, the Department of Alcohol, Tobacco and Firearms (ATF) currently categorizes Traditions NitroFire muzzleloader rifle as one that does require an ATF Form 4473 to be completed and approved to purchase.

For more information and videos about Federal Ammunition’s new, ground-breaking FireStick and all other products from Federal ammunition, visit: Federal Premium

The contents of this article were produced by Federal and are supplied by the company.

You can discuss this article with the Rokslide community here.