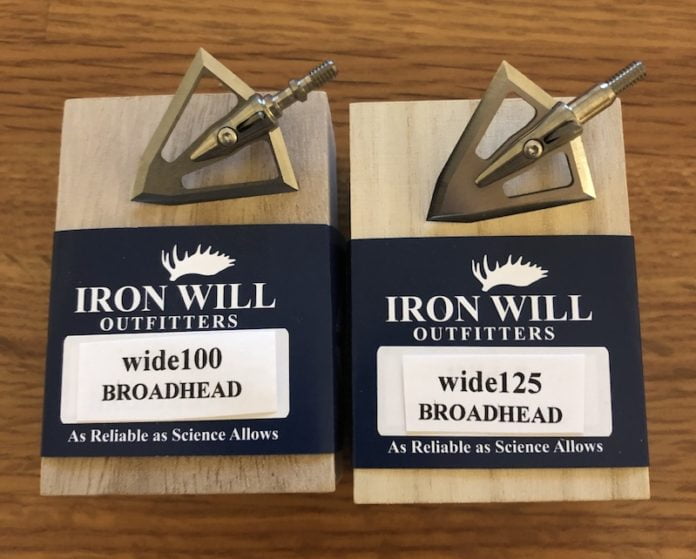 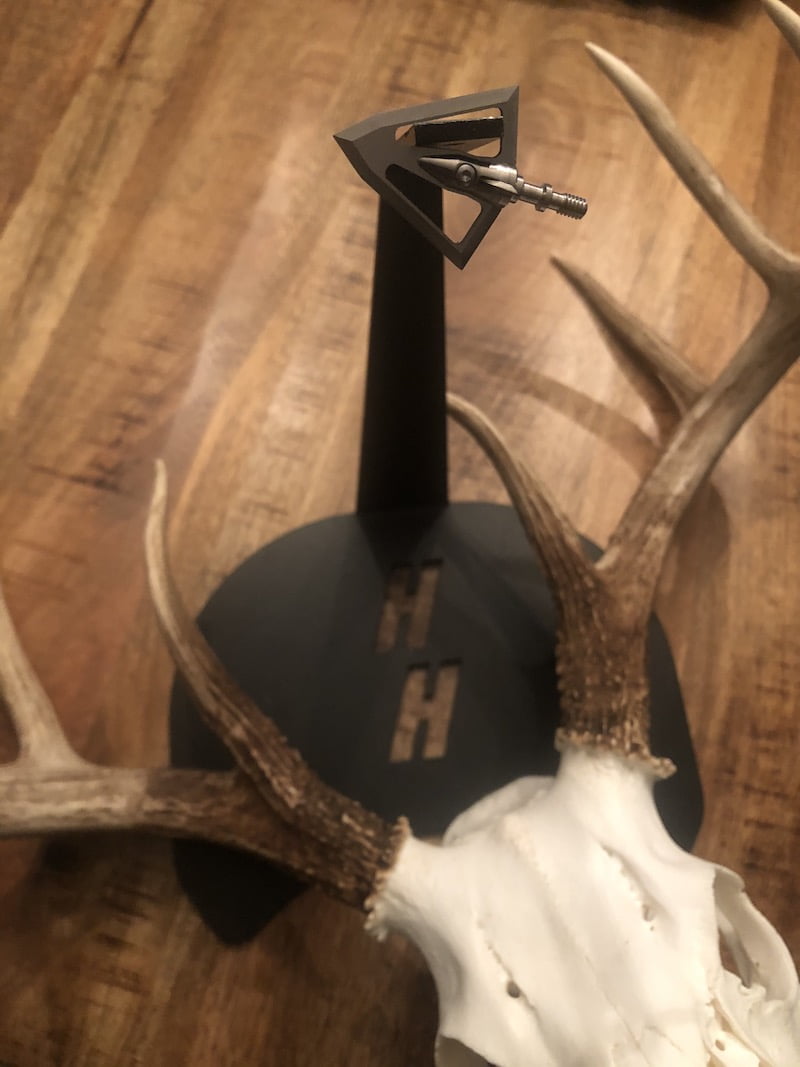 For the most part,  Bill Vanderheyden and Iron Will Outfitters no longer need an introduction.  However, if you’re unfamiliar with the company or the previous reviews we’ve done you can find them here. The original V-series from 2017 and the S-series from 2019. This article and Archery Trade Association show (ATA) 2020 bring the introduction of the Iron Will Wide series. Learn more here. 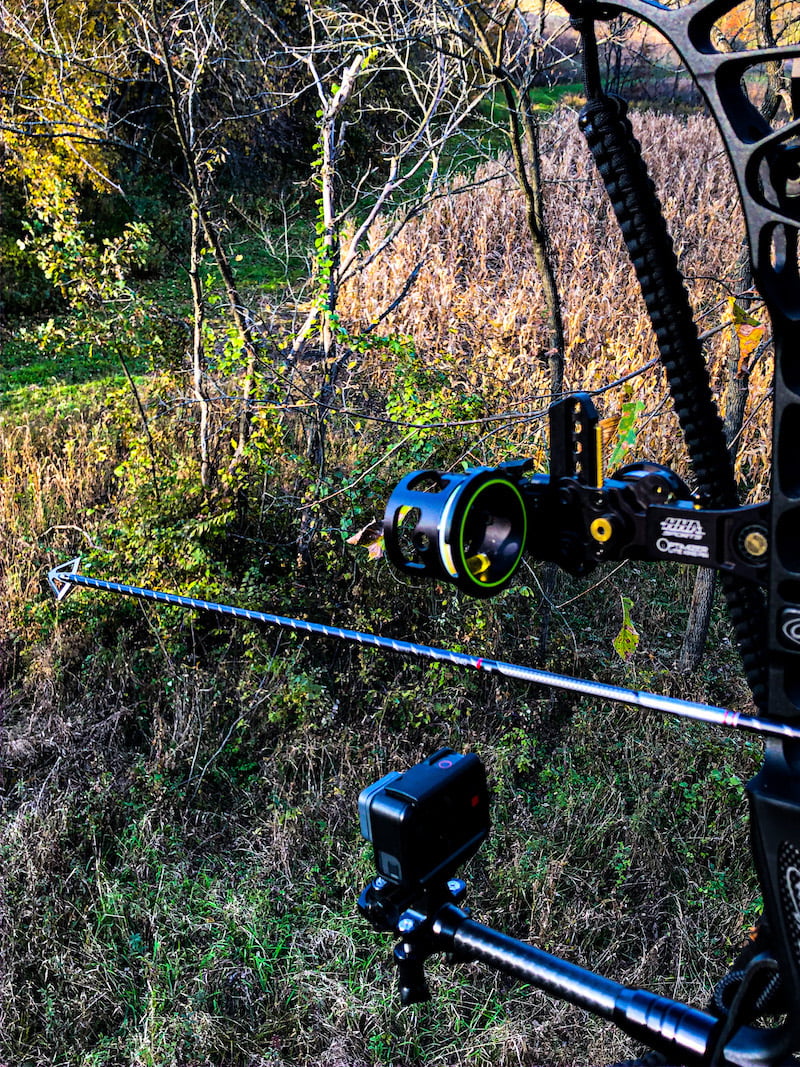 Why a wide?  I had my thoughts, but was curious what the driving reasons behind the new line were. When I reached out to Bill, here was the response I got.

“The Wide series is in response to customer feedback and requests. In the beginning it was something we didn’t intend to do. We did not want to sacrifice any of the things we have built our previous heads around. Through lengthy testing in the lab and in the field,  we determined that we could produce this new series without sacrificing the durability, accuracy, and integrity that the Iron Will brand is known for. “ 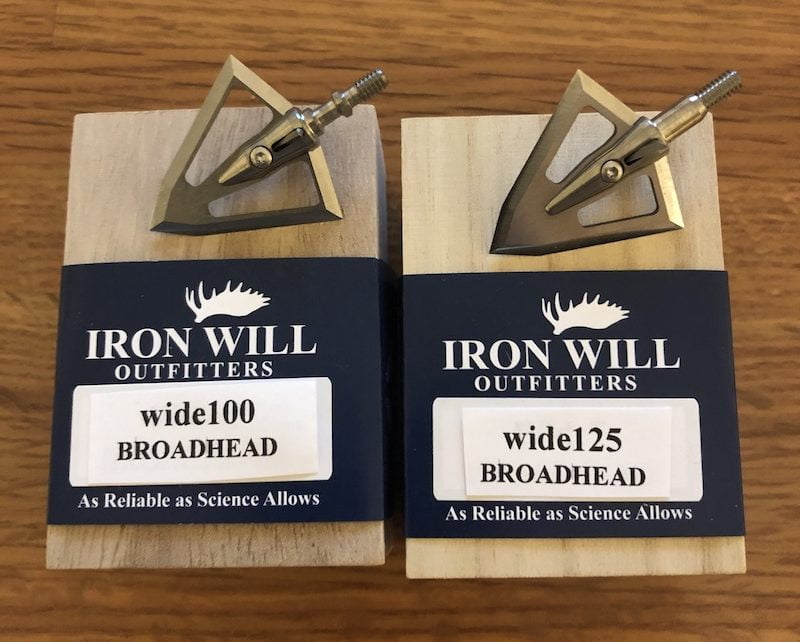 These heads are 30% wider than the S&V series. The main blades are 1-3/8” cutting diameter and the bleeders are ¾”, for a 2-1/8” total cut. The wider cut and longer blades of the Wide Series were achieved by utilizing the Solid Series ferrule and removing the bridging in the vents of the blades. This allowed the Wide Series to not be thinned in blade thickness, a key structure point of these heads.

The blades are still the same A2 tool steel, and ferrules remain the tough Grade 5 titanium. You will also see the same Tanto style tip, and back edge blades. 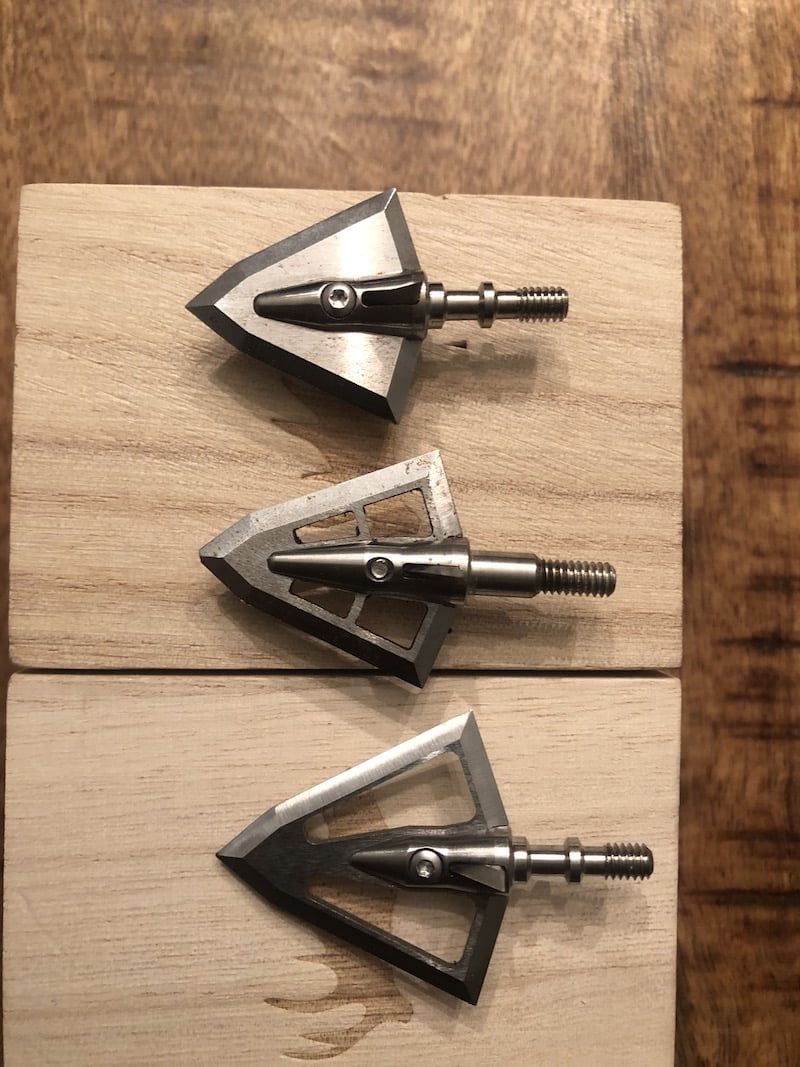 Out Of The Box

After the initial awe of seeing this head, the first thing I checked out of the box was weight. My 100 grain heads came in at an average of 102.4 grains. Next thing was a spin test. These all spun perfect and to the same consistency I’ve come to expect from Iron Will.

I was already well into hunting season when I got these heads to test, and my Mathews VXR was dialed for the 100 grain solids. Really wanting to put these through real world testing as soon as I could, I pulled out my block target during a mid-day move between stands on my Missouri hunt. My plan was to shoot a few arrows and see how differently they would fly. When I compare broadheads, I pick two spots to shoot.  I’ve learned that Iron Will heads are hard on things they impact; and arrows are expensive.

At 20 yards I hit the two bullseyes–one with the Wide 100 and one with the Solid 100. Same result at 30 yards. At 40 yards I was outside of the 2” bullseye, but not much. At 50 yards, both heads, were inside of my self imposed 5” limit, for four rounds of arrows. I feel very confident I would have been able to deliver these heads where I needed at 60 yards, if the right situation presented itself.

Missouri didn’t offer the opportunity to send one of these at an animal I wanted. Kansas and Wisconsin were a different story.  I was on stand less than an hour my first morning before the Iron Will Wide 100 drew Kansas blood. Although he was quartered to, I had height above him. After holding at full draw for a good amount of time the buck turned a little, knowing something wasn’t quite right. I held high and tight to the scapula, knowing I would be back on exit. I watched the arrow disappear, and then ricochet beyond the buck, off the frozen ground. Not my preferred shot, and anything but typical. This was an ideal test for the new head!

My hunting partner, Nate, and I chatted for a few moments, in awe of what just happened in our first sit in the first hour in Kansas. We knew the hit wasn’t ideal, but we wanted to see the arrow, and how things looked. We found blood and hair at the exit, and the arrow was covered. Within the first bound, we could see blood. We took a few steps into a literal line of blood with drops as big around as a Sharpie, and solid. At 50 yards there was amazing blood.

As we worked the trail, he snorted and jumped out of his bed, crashing towards the open field. We also ran the few yards to the field edge, getting there just in time to see him staggering (we thought) back into the woods. We decided to head out and give him time.

Even though it was a freshly chiseled field, we could easily see the blood line soaked into the dirt. We quickly covered the 100 yards back to the woods edge. With arrow knocked, we were intently searching with our eyes, looking for the bedded buck. We both about jumped out of our skins as we saw him piled up just three feet away. He had died on the run where we last saw him. The amount of blood left on his run, and the internal hemorrhaging was amazing. The Iron Will Wide 100 Broadhead performed as I expected. He was destroyed. 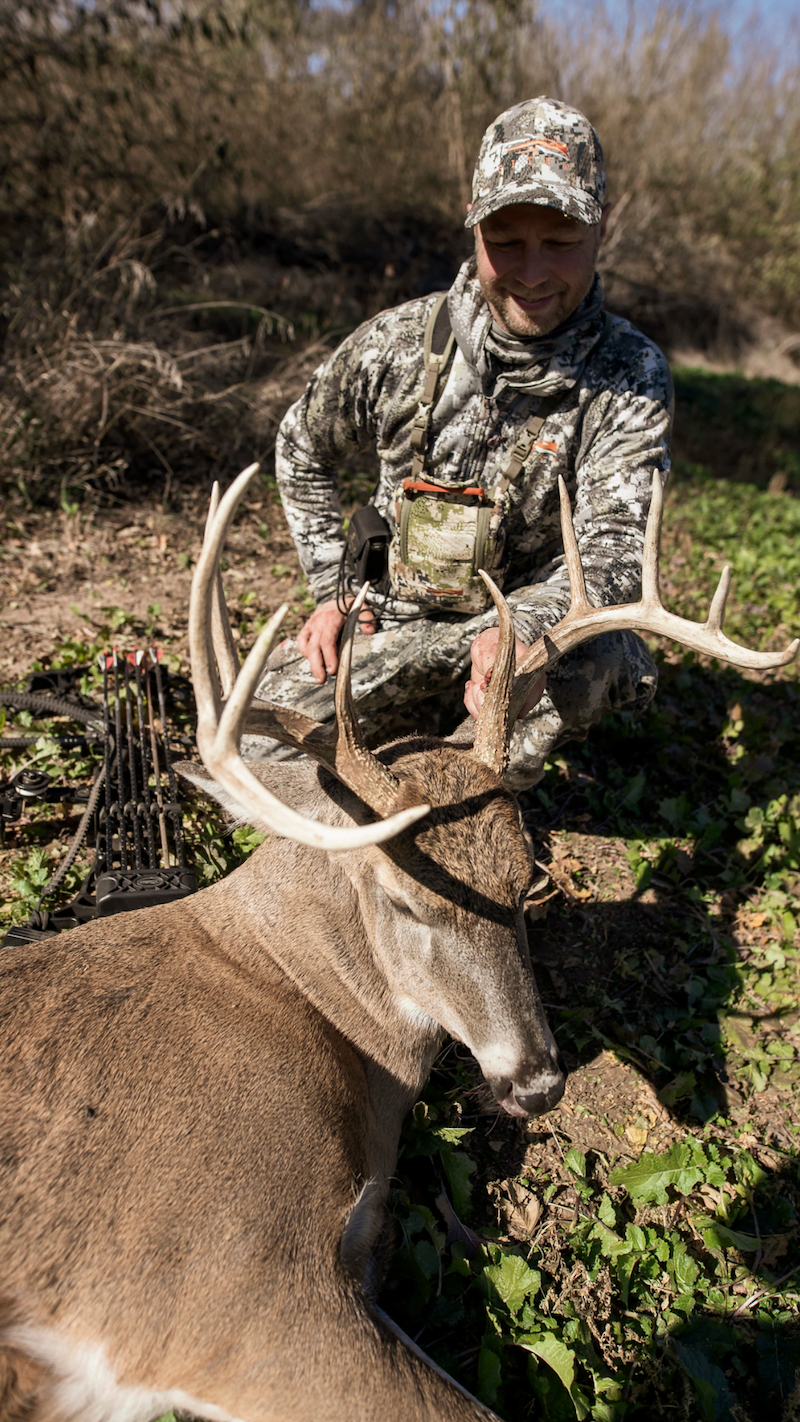 My next chance to test the Iron Will Wide would be a late season snow hunt in Wisconsin.  I was doing some scouting in an area that I hadn’t hunted before. My plan was to scout my way to a treestand about a half mile away. No more than 10 minutes into my scouting a deer bolted out if its bed, and ran a circle around me. I was able to nock an arrow and draw as she came to a stop. With a few branches covering the vitals, I quickly guesstimated 52 yards.

I held my 40-yard pin on her back, judged my arrow would clear the branches, and executed the shot. The branches hid my impact, but the hollow sound indicated a good hit. With deep snow, it would be easy to read what happened. Within three minutes, I was on a good blood trail. Fifty-five yards later, I found her sprawled out with a great double lung hit, and blood everywhere. 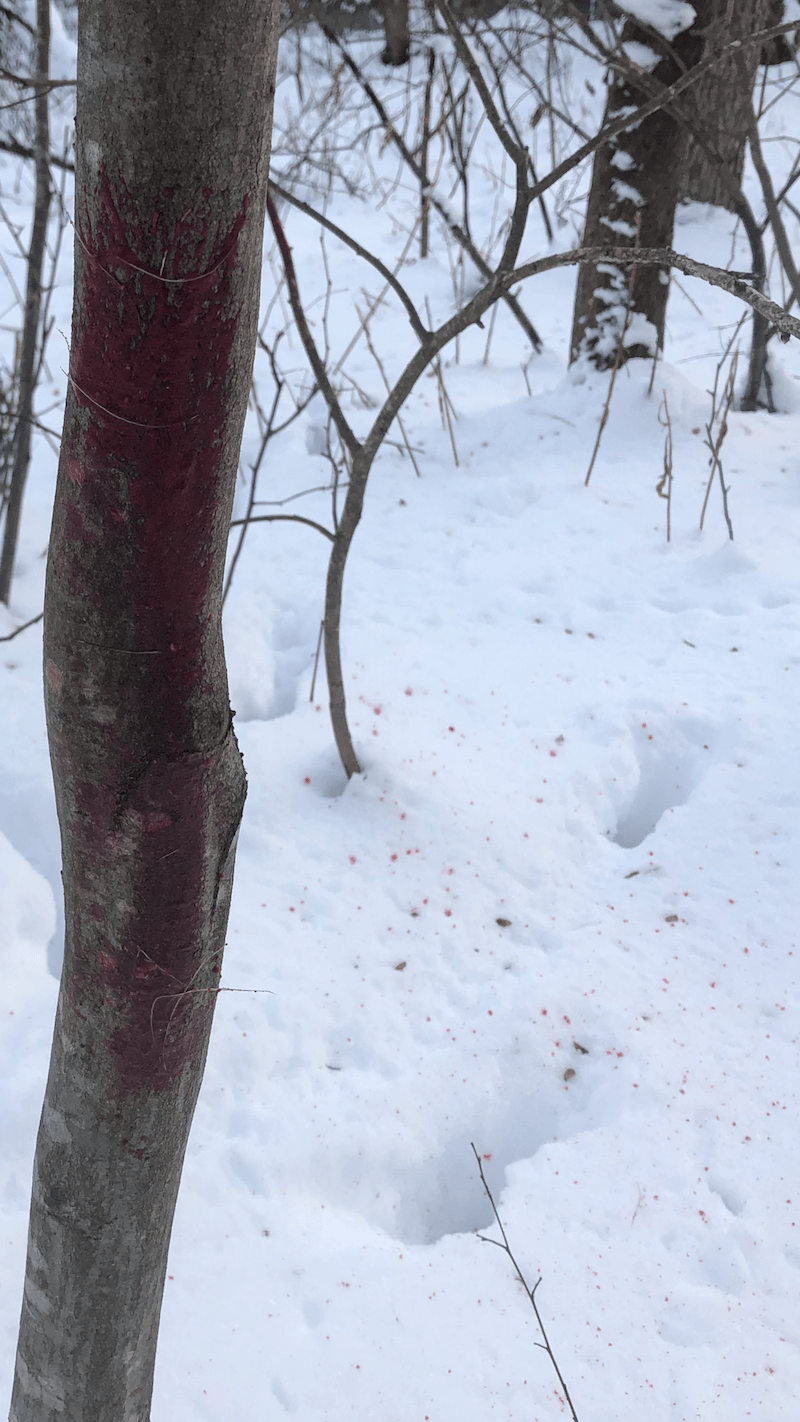 Below is the final paragraph that I ended my first review with on the V100 back in 2017:

“I have no doubt from the time you open the box to the time you tag your animal you will not be disappointed in the Iron Will Outfitters Broadheads. New company–yes–but hold on because when word gets out they will be among the industry forefront.”

I’m pretty sure I’m a prophet!  Seriously, I wish I could forecast the future that well on everything else. The only part of the statement I’d change now is the new company part. I’d say Iron Will is now well rooted in the archery industry, quickly becoming the leader in broadhead manufacturing and technology. 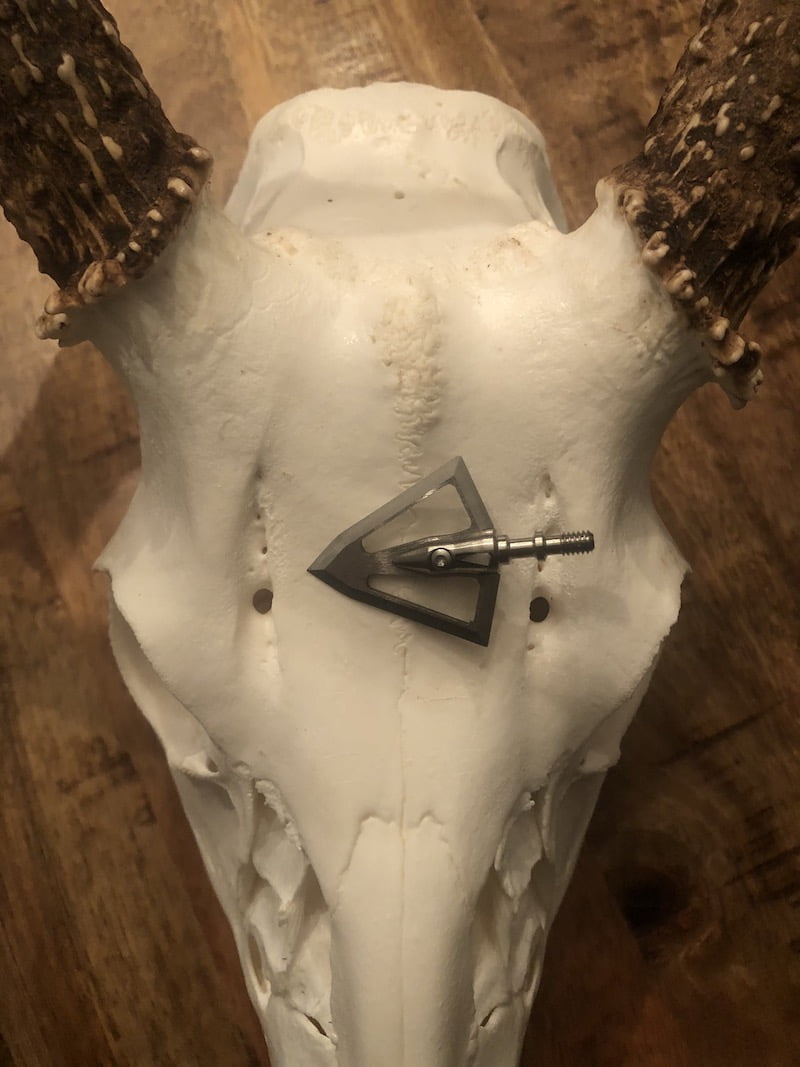 I believe that the Iron Will Wide was “designed” for deer and bear sized animals that are easier to pass through. After seeing how well it flies and performs, I’m looking forward to 2020 WHEN I’ll be carrying these in my quiver for September elk, and then later on some whitetail hunts!

These are just now becoming available for purchase, which you can do here, and you can comment or ask questions here.