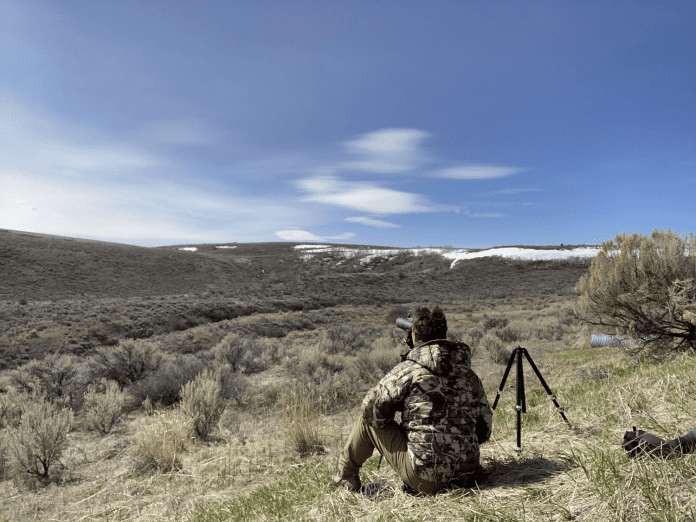 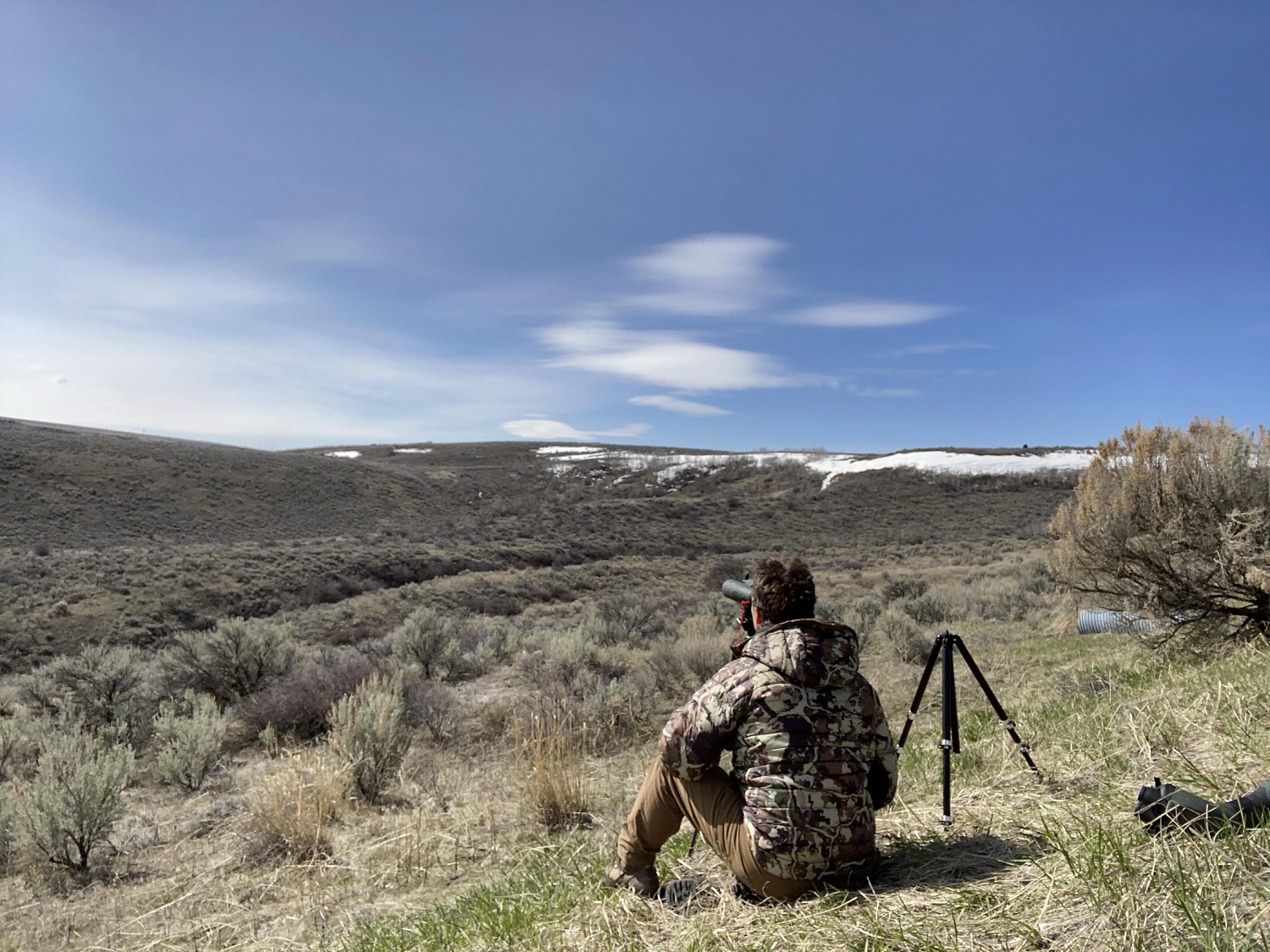 Once carbon fiber tripods became widely available at least a decade ago, I dropped my aluminum tripods like hot rocks and made the switch.  I was saving more than a few ounces, and even pounds, depending on the model. As a Rokslider at heart, saving weight was king so I never looked back.  At the WHC Expo 2020, I stopped by the Outdoorsmans’ booth and was soon deep in discussions regarding aluminum vs. carbon.  I was surprised that Outdoorsmans didn’t offer a carbon tripod. They reasoned aluminum made a better platform and that if they offered carbon, it wouldn’t be made in the USA (one of their hallmarks).  They were curious however about the true demand and performance of carbon vs. aluminum.  I offered to start a Rokslide member poll to see what the demand for carbon was.  I also proposed a head-to-head review of the Outdoorsmans’ Medium Prototype (which became their Outdoorsmans Standard here) and the SLIK 624 Pro offered by S&S Archery here.  Both companies readily agreed.

Almost 200 Rokslide members voted in the poll here as of December 2020. Not surprisingly, nearly 80% of the Rokslide crowd chose carbon over aluminum for tripod construction (we did not poll brands, just material choice.) 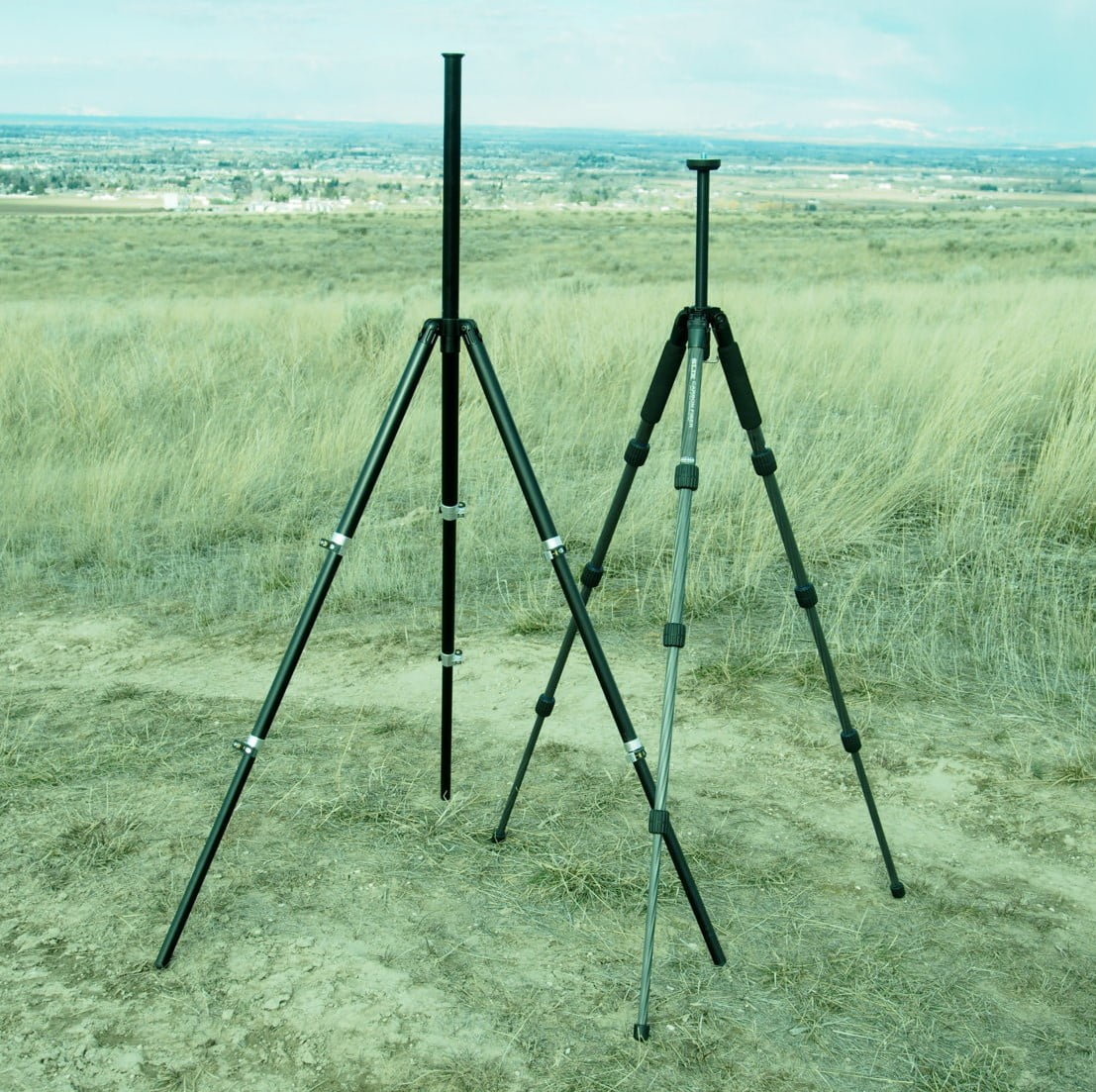 I had already been using the SLIK 624 for two seasons but S&S’s Rob McConnell sent me the updated version that includes a blue sleeve under the leg lock “for aesthetic purposes,” and a spring-loaded center hook for adding stabilizing weight.  I also received the Outdoormans within a few days.  The head-to-head was on!  When competing companies step up for these type of reviews, and with no pre-conditions, it tells me right away they truly believe in their products.

For this review, I ran both the Outdoorsmans Micro Pan Head and the Pan Head (video review here).  For optics, I used Swarovski BTX 95, 15×56 SLC, and the 25-50x80mm ATS over the five months of testing. Much of the testing occurred with the tripods side-by-side. 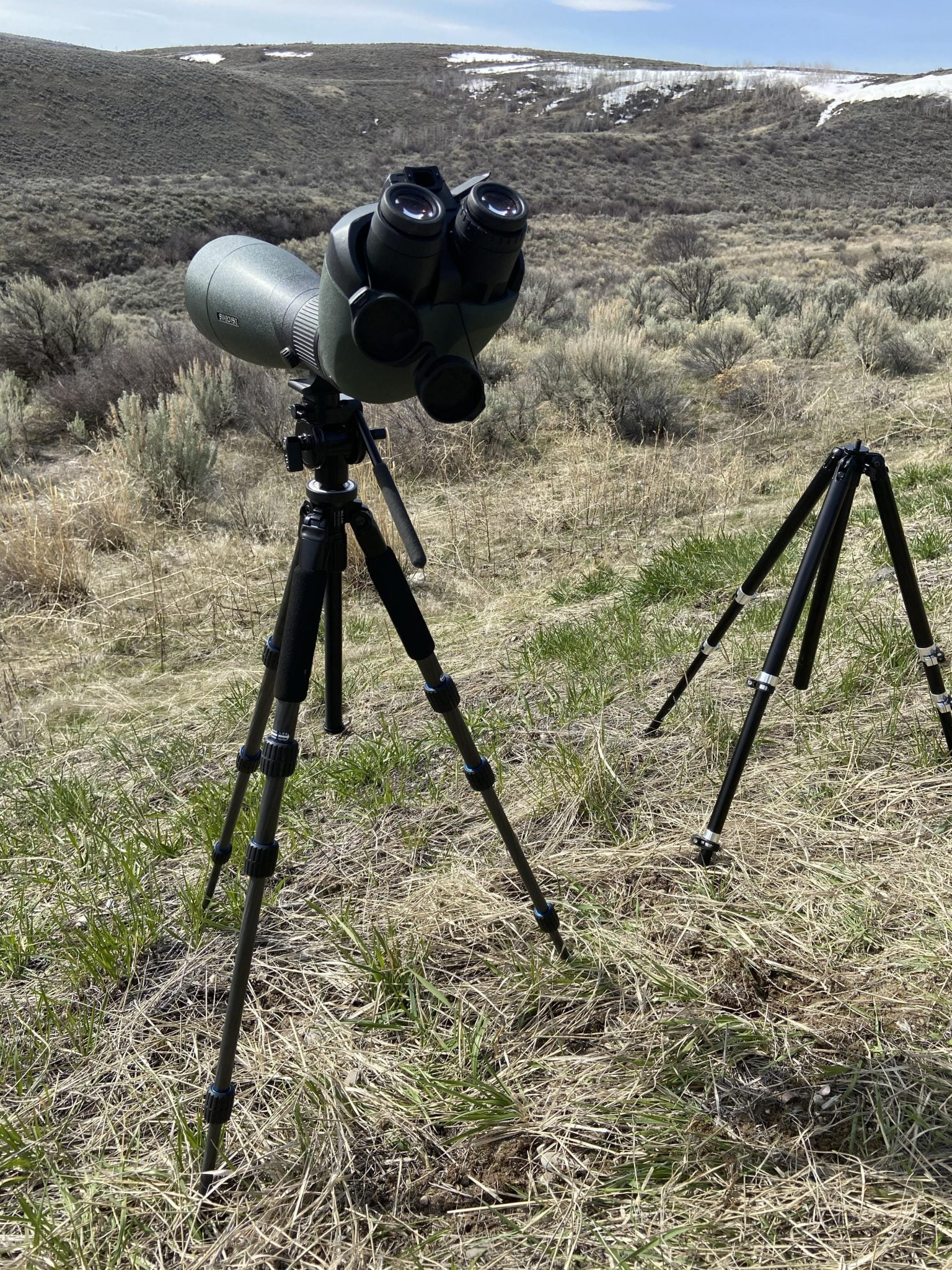 I mostly hunt out of a pack. Even when hunting with horses, my optics invariably end up on my back, so saving weight is important to me.  The nearly 1lb difference between the two is significant and illustrates why I went carbon all those years ago.

Some have said that a little weight is not a big deal. However, I notice these comments aren’t typically coming from our most serious lightweight backpack and backcountry hunters.  When designing hunting systems to be lightweight, you can’t just consider one piece of gear.  Rather your entire system has to be accounted.  A popular saying among our most serious backcountry members goes something like this:

“An ounce here and an ounce there leads to pounds everywhere.”

If your style of hunting isn’t dependent on ounce-counting, the weight difference between these tripods probably won’t be an issue.

For me, as the season progressed, I found when the tripod was going on my back, I invariably chose the SLIK 624 Pro.  When glassing from or near the truck, I ran the Outdoorsmans Standard. 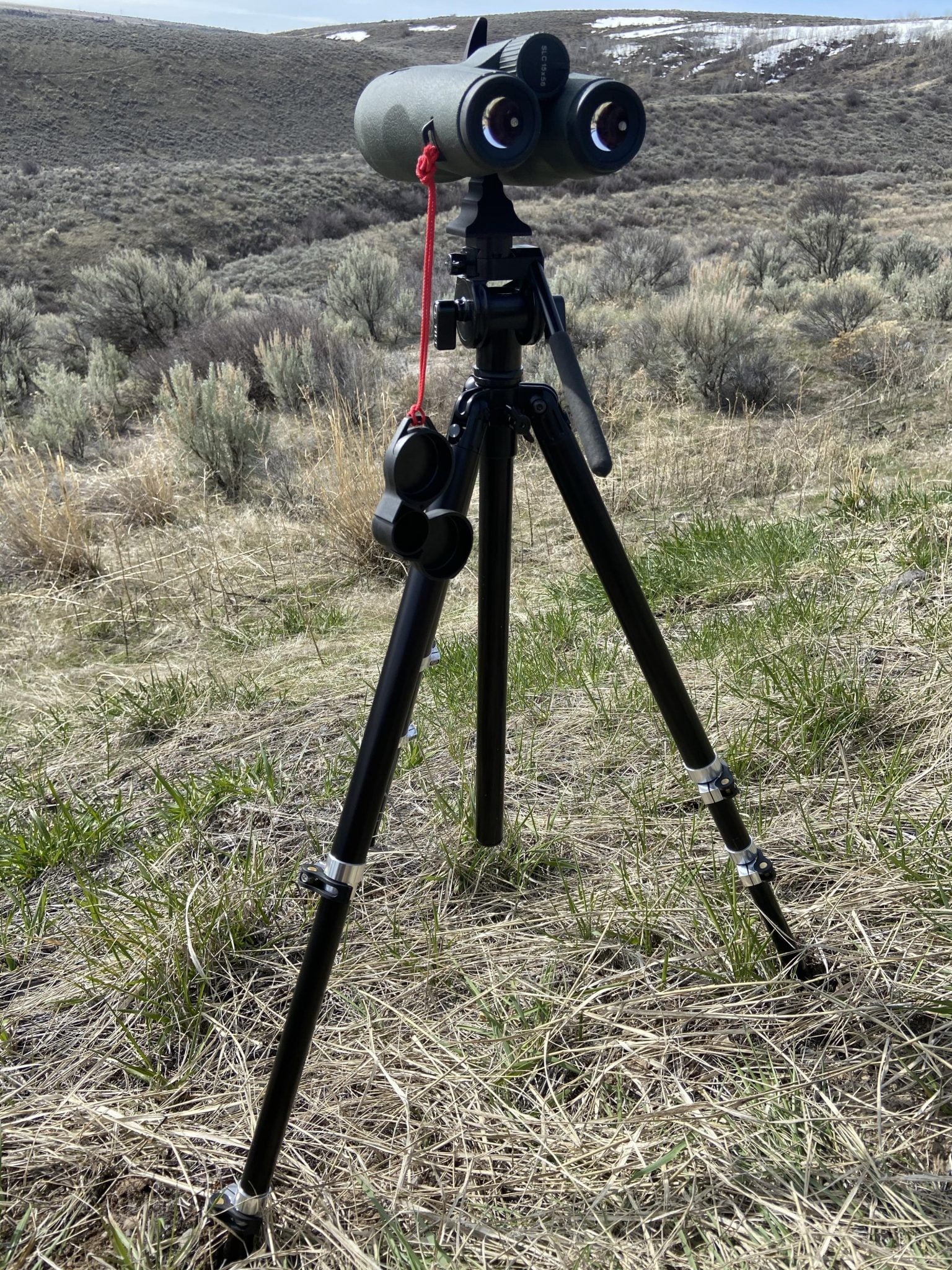 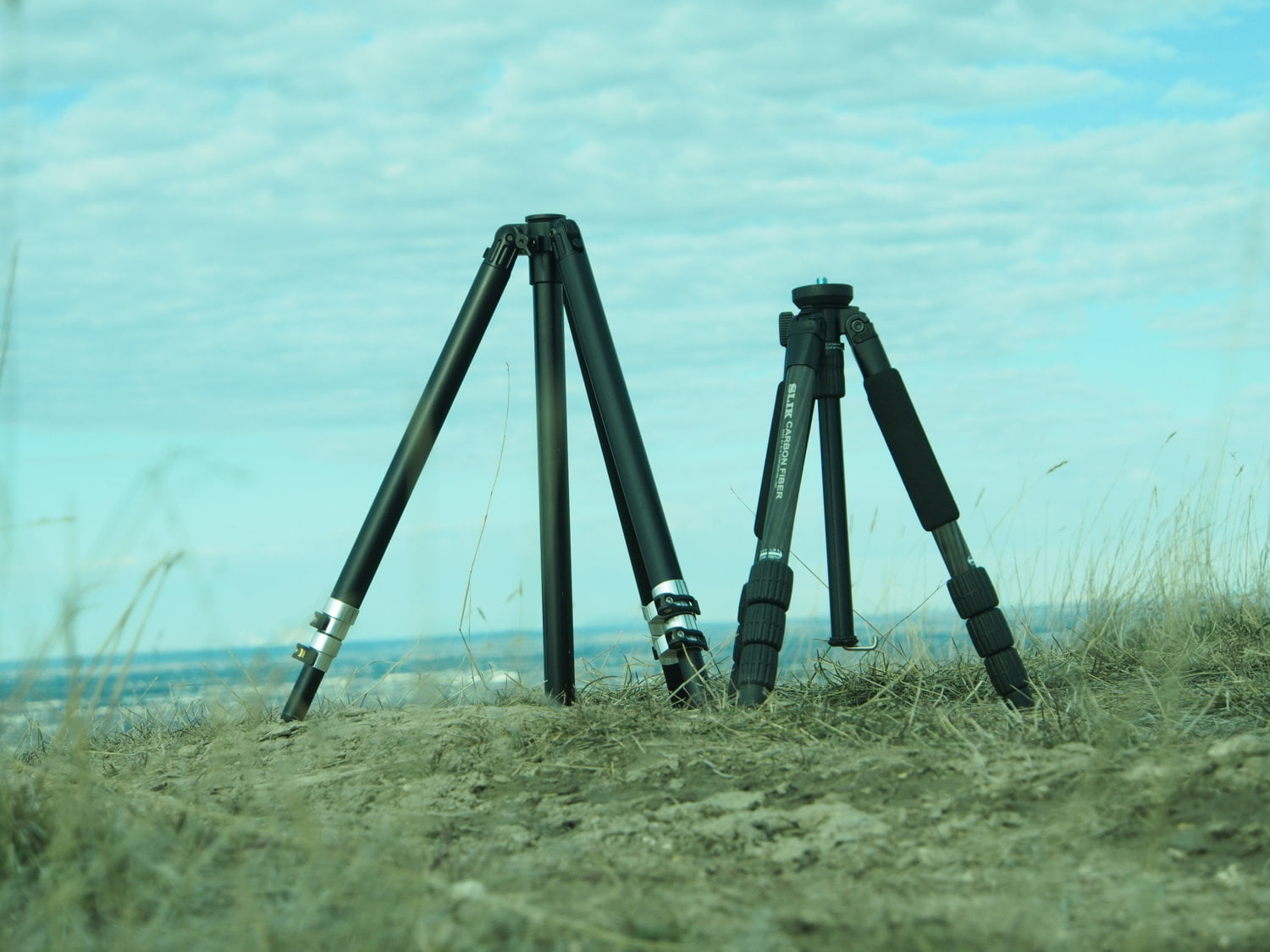 The Outdoorsman’s Standard more easily allowed my son and I (both around 5’9″) to glass standing up when running an angled spotter. 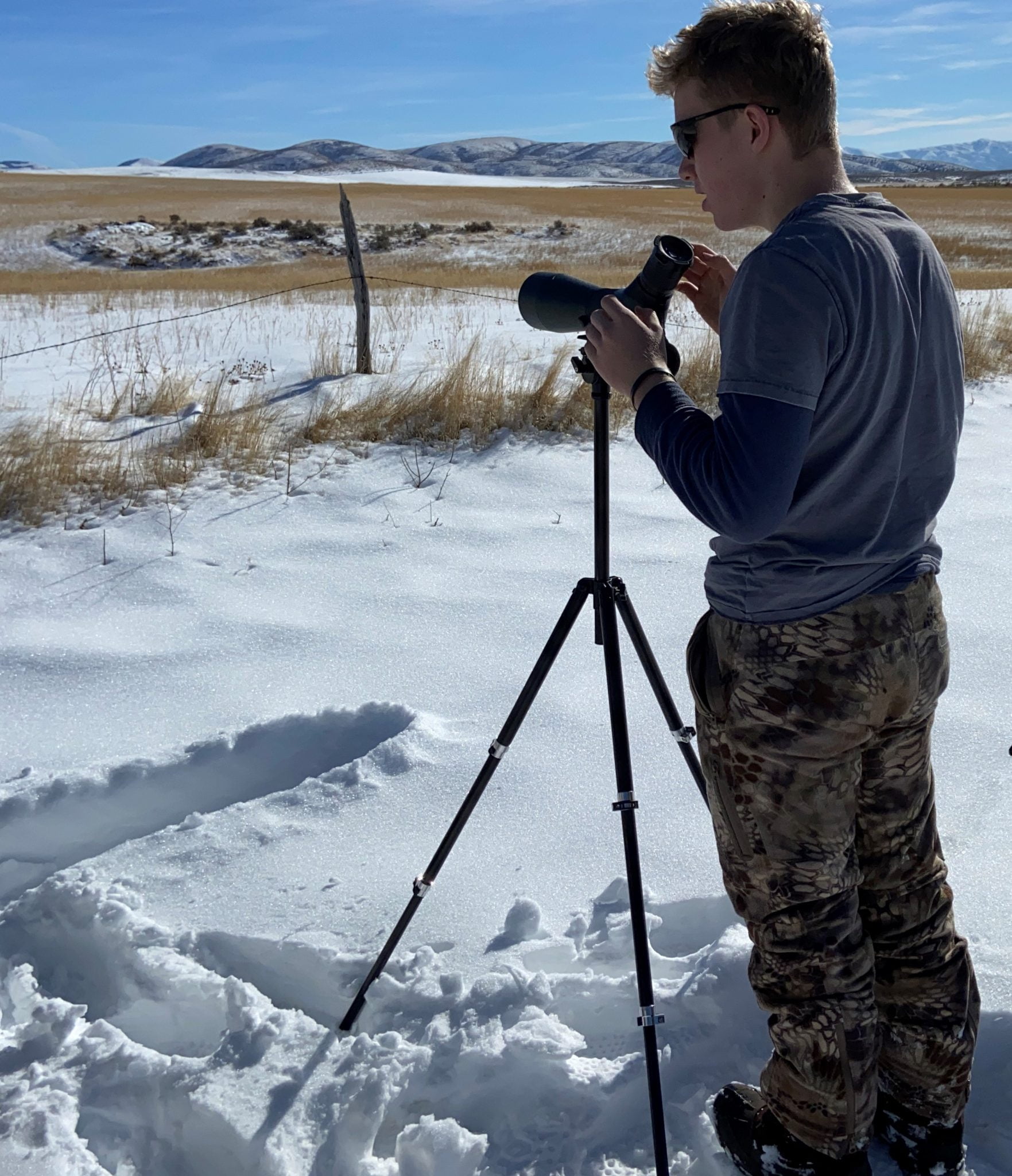 It’s not that I couldn’t glass standing with the SLIK 624, it just wasn’t as comfortable.  I often had to move it to ground that was a little higher than where I was standing to make up for the nearly 6″ difference. 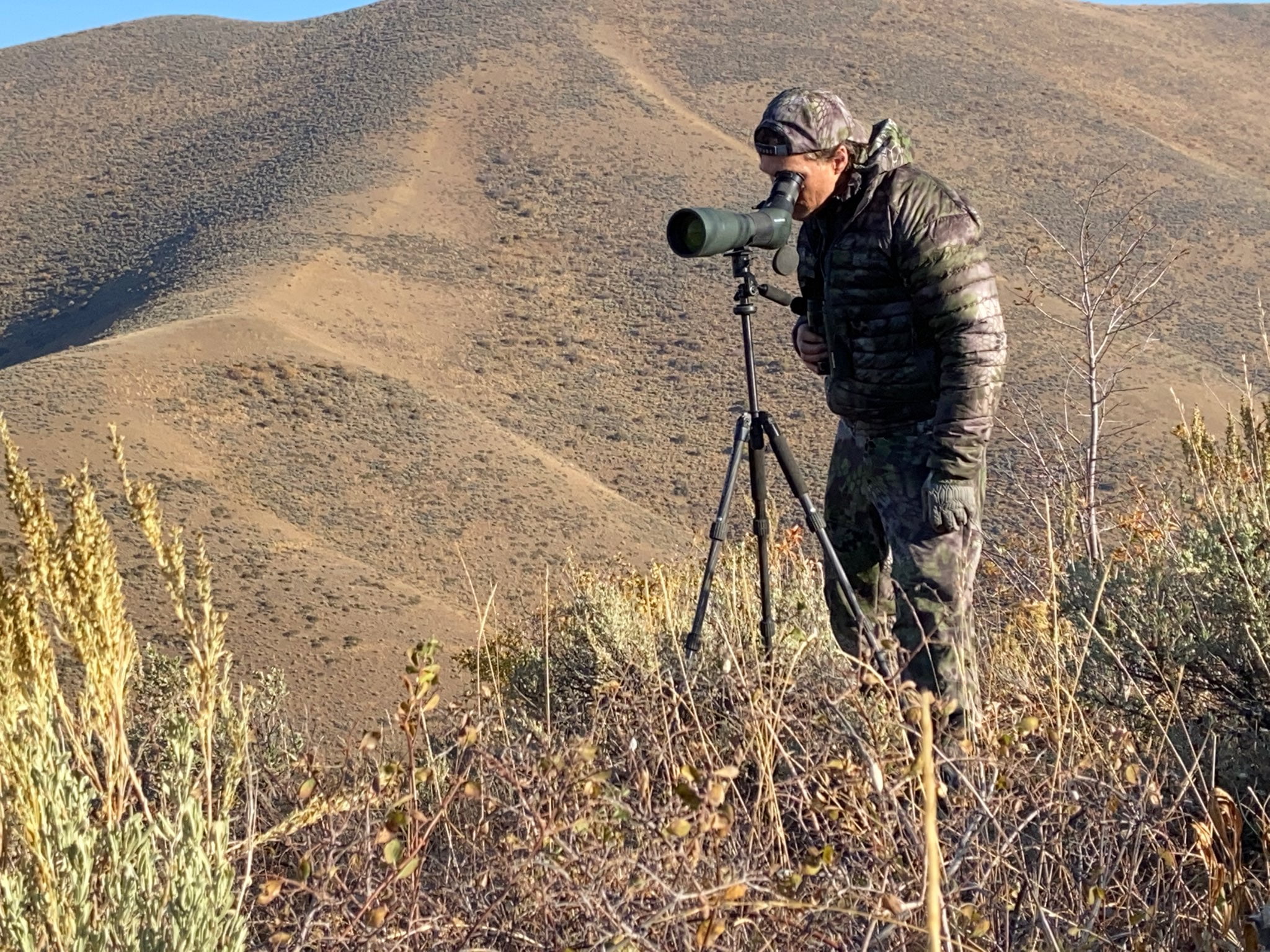 Collapsed, the SLIK is about 4″ shorter.  That’s noticeable and very pack friendly. When hunting from horseback, I found the SLIK 624 Pro with the Outdoorsmans Micro Pan head fit in my Mesa Horse Gear Saddle/Cantle bag; the Outdoorsmans Standard did not fit. 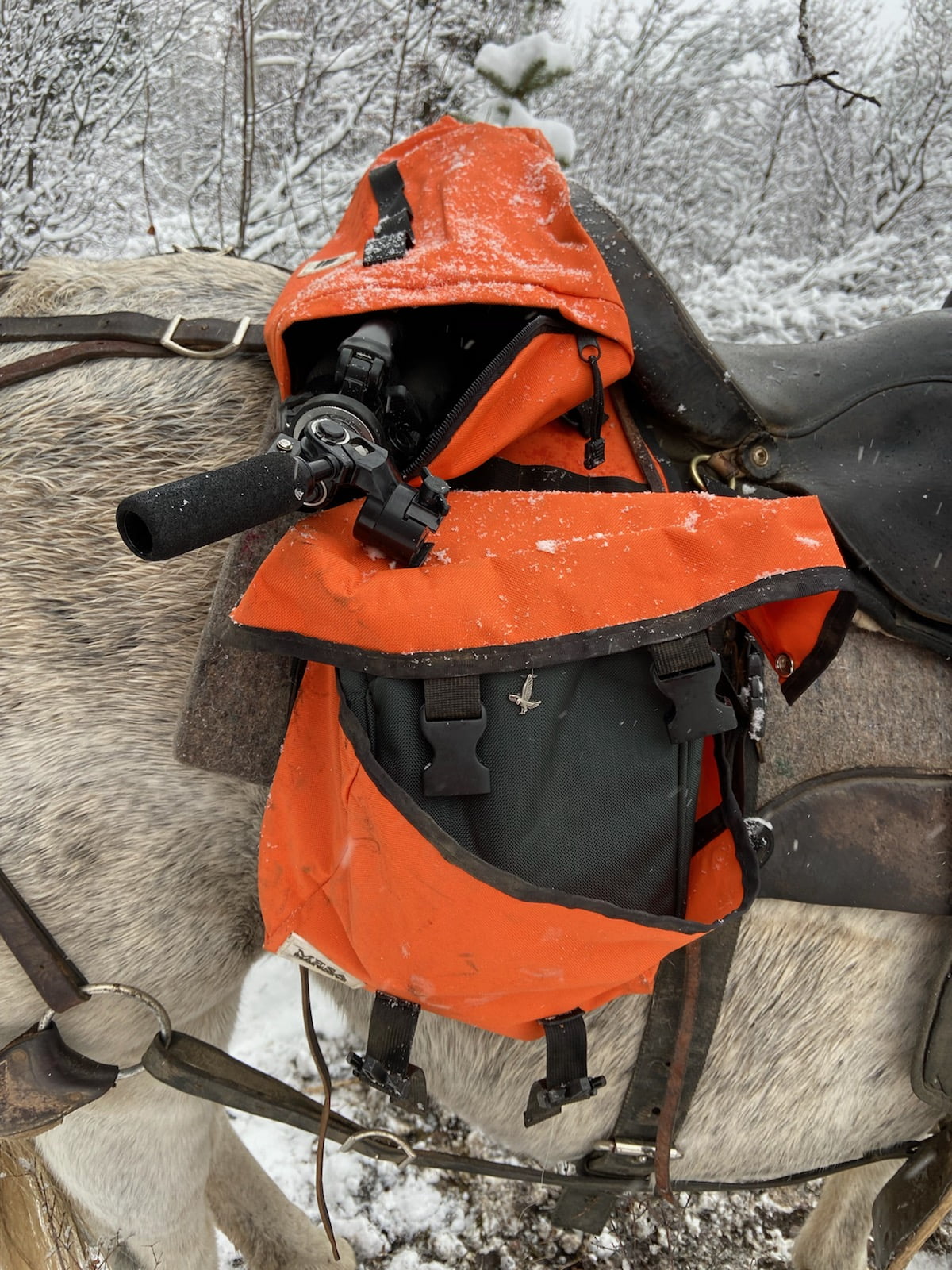 So considering weight and height, I kept the Outdoorsmans near the truck, and the SLIK in my pack.

Leg lock Type matters. Why? Glass enough and I guarantee that there will be multiple times per season when mere seconds count when setting up your tripod. Bulls, and especially big bucks, seem to appear and disappear quickly.

Outdoorsmans Standard has the traditional lever style leg locks.  They are more intuitive to use and a little faster, but also act like grapple hooks when pulling the tripod from a crowded pack.

SLIK has the twist lock.  Similar to a rubber tire on a kid’s toy, I find the advantage is I can pull my tripod out of my pack without snagging other items. Seems trivial, but again–in real-world use–I find it a painful time suck to pull a tripod out of a crowded pack with the traditional lever leg locks.  However, even with two years on my SLIK, I still find myself twisting the locks the wrong direction on occasion.

For me, it’s worth the downside of the twist locks to save weight and have easier access to the tripod in a pack.

On a side note, the Outdoorsmans Standard comes with rubber spikes at the leg ends, while the SLIK 624 Pro has rounded rubber feet.  The spikes offer better grip on most surfaces.

Price matters and can be the difference between owning a great or a sub-par product.  Neither of these tripods are sub-par and are top choices for any serious western glasser.  However, if price is a determining factor, the SLIK at $230 vs. the Outdoorsmans at $499 leaves $269 bucks in your wallet.  At least a part of this price difference is that Outdoorsmans are made in USA while SLIK is of Japanese origin.  So if it’s only “Made in the USA” for you, choose the Outdoorsmans.

I ran these tripods over five months of hunting and scouting, many times side-by-side.  The aluminum offered noticeably better stability than the carbon, as long as there was a breeze.  Without wind, there was not a noticeable difference.  I observed this mostly at all height settings. Operating the tripods closer to the ground gave an even smaller edge to the aluminum.  Both tripods offer multi-angle leg settings to adapt to a multitude of glassing positions. 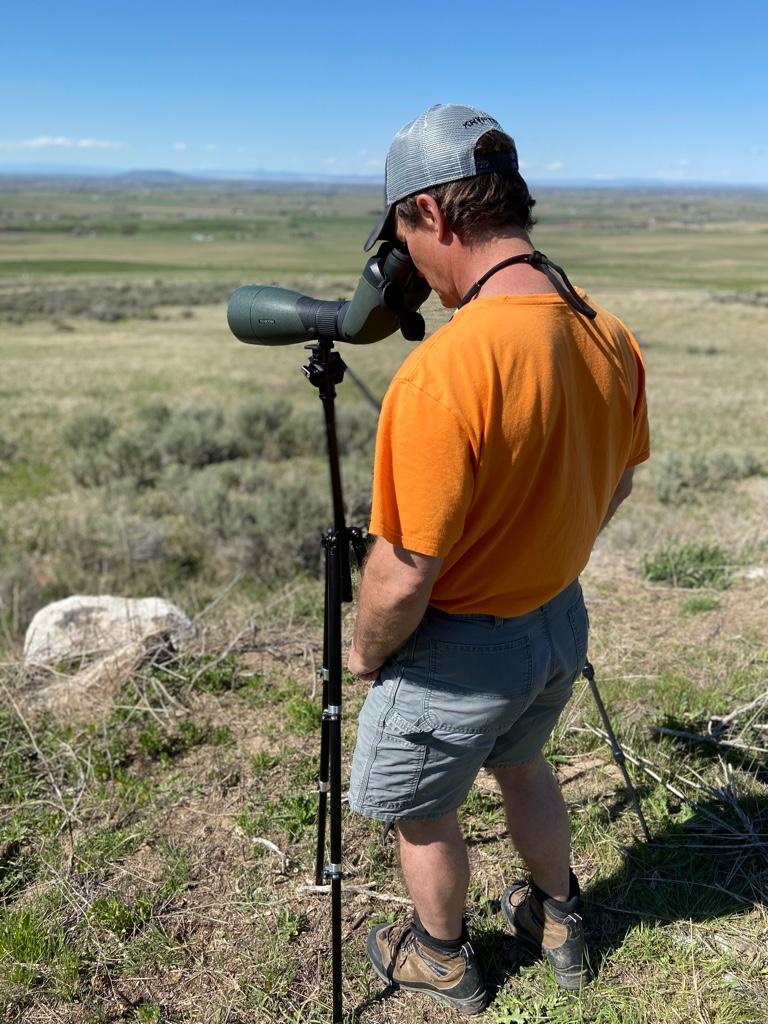 Noise matters to me.  When hunting bucks and bulls, they’re not always on some distant ridge. The carbon makes much less noise than the aluminum, whether contacting branches, rocks, weapon, or even itself.  Even when extending the legs, the carbon makes less noise.

Also, if you want to shoot off your tripod, like I often do, you could be setting it up quickly and won’t want to make any extra noise.

On a side note, the carbon is much warmer to the touch than aluminum. This matters in sub-freezing temperatures when handling or carrying your tripod much.

I finished the season with at least 50 days on these tripods. Nothing broken or malfunctioned in that time.  I can only assume that the heavier construction of the Outdoorsmans will lead to greater durability.  Non-scientifically, the opinions I’ve heard from Rokslide members confirm that assumption.

The heart of this project came down to the choice of materials.  Like all the categories above, I found there were trade-offs.

Ultimately, while these are both great tripods, for my style of hunting (weight & space at a practical minimum,) the less stability of the smaller and lighter SLIK 624 Pro was a fair trade-off for the one-tripod man. I can easily add weight to the column hook if wind is a problem. The Outdoorsmans Standard is truly a great tripod with more stability and versatility, (and likely durability) especially with a big optic like the BTX, but nearly a pound is a pound! 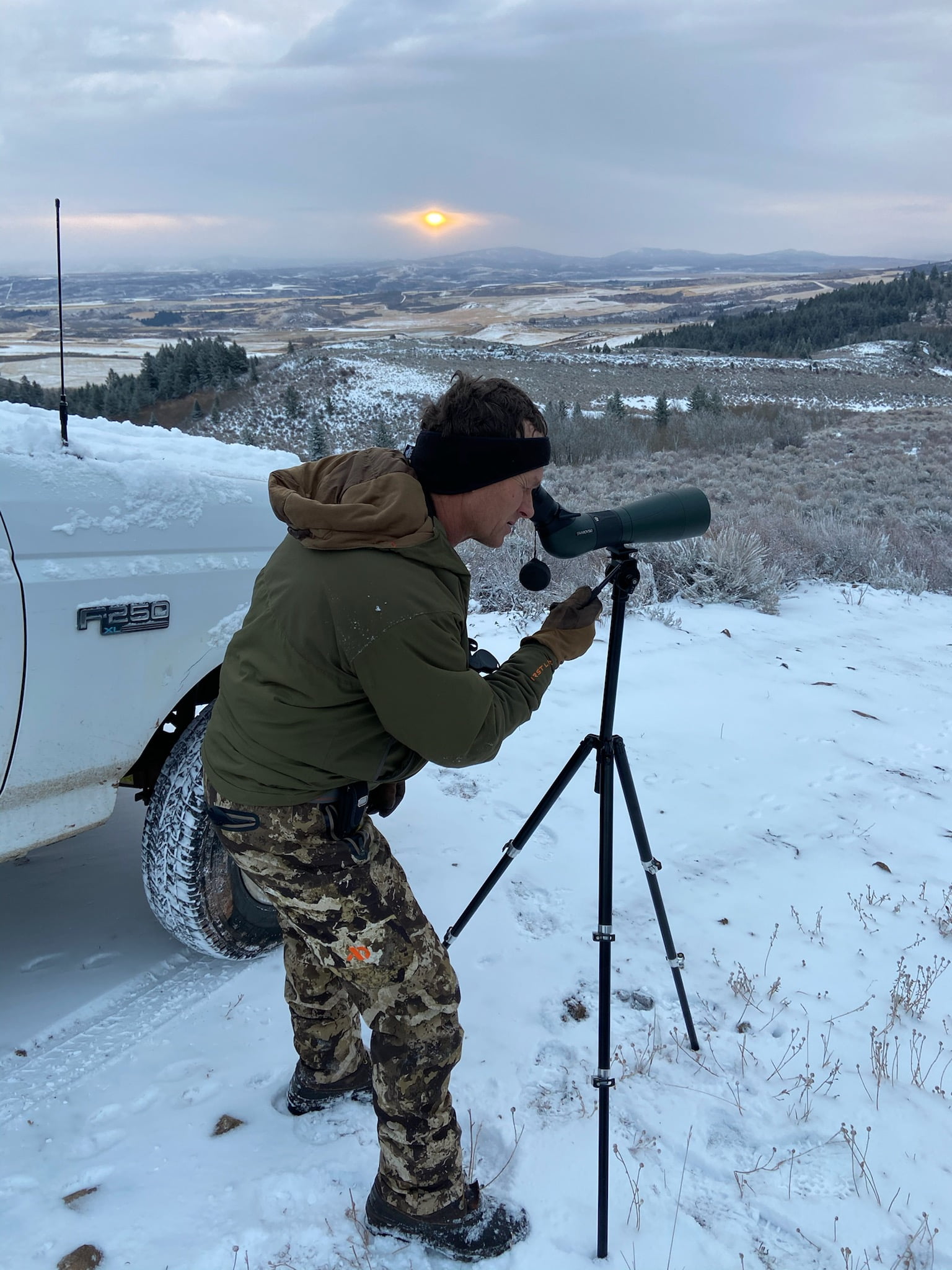 If you just can’t decide, buy both! Start with the SLIK 624 Pro here and once you’re healed up funds-wise, add the Outdoorsmans Standard here.  Unless you’re over 6′ tall, you’ll be ready for anything the West and beyond can throw at you. 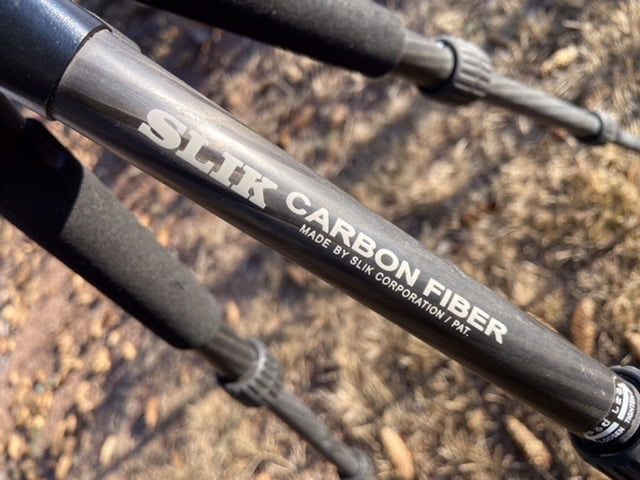 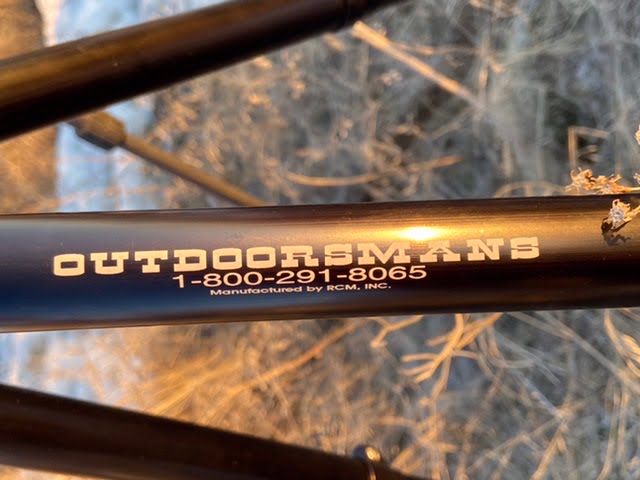 This review was originally a forum thread.  To see all that went into the review and even more experience and opinions from Rokslide members, you can join that discussion here

*To note. There is zero difference between the Outdoorsmans Prototype tested in this review and the Outdoosmans Standard.

A Bag of Bags: How to Organize Your Backpack

Shelters for the High Country