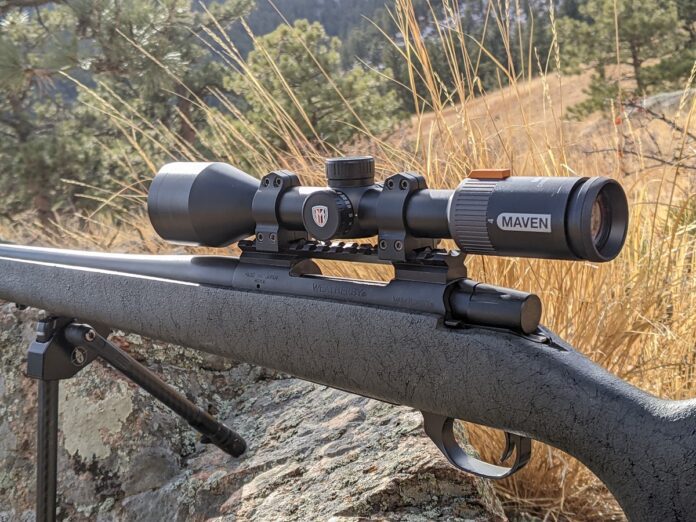 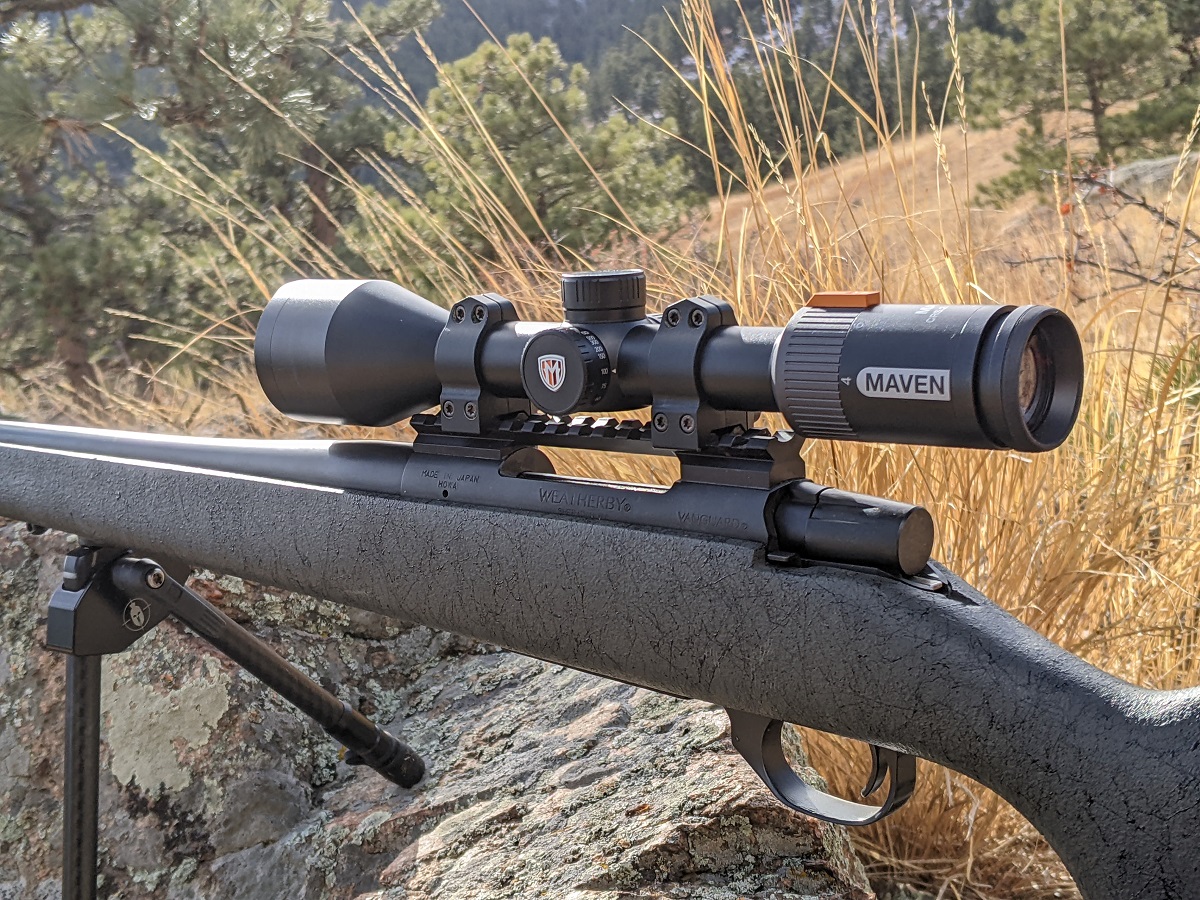 Maven was founded in 2013 with the idea of answering the call for delivering direct-to-consumer optics that never compromise standard or performance. One overlooked advantage of their business model is that Maven answers to the demands of customers and is not influenced by middlemen seeking larger margins through sacrificing product quality.  New for 2022, Maven’s Classic Riflescope Series (CRS) is a result of Maven’s ear to customer feedback, and commitment to its founding principles. The CRS will be offered in two models, the CRS.1 link and CRS.2 link (specs below).

Maven’s Co-Owner and Operations Chief, Cade Maestas, afforded me a candid conversation after I had a couple of range sessions using the Maven CRS.2 riflescope.  I learned that the CRS line is intended for the shooter who wants to take their first step into a premium optic and top-tier brand but doesn’t necessarily need the breadth of features found on Maven’s other riflescope offerings.  A spartan feature set brought along with it a lower cost to the consumer; one of the benefits of Maven’s direct-to-consumer approach.

I pryed Cade for some some sort of indication that a reduction in material or process quality in the CRS line was compromised.  He assured me there was not.  Cade reiterated that the materials, process, construction techniques, and Japanese production facility were identical to their current line of riflescopes.  The consumer would simply be paying less for a CRS because they were foregoing add-ons, just like declining leather seats on a new truck saves cash.

Cade went on to explain that the CRS line was designed with reliability in mind for the consumer who simply wants to get out and hunt without a second thought as to the quality of their scope and where it will place bullets.  Feedback from sport shows taught Maven that not all hunters value involved reticles, illumination, exposed/resettable/zero stop turrets, 30+mm tubes, etc.  In short, the CSR line is intended to hit on what Maven believes 90% of hunters need, with utmost reliability, and premium optics. 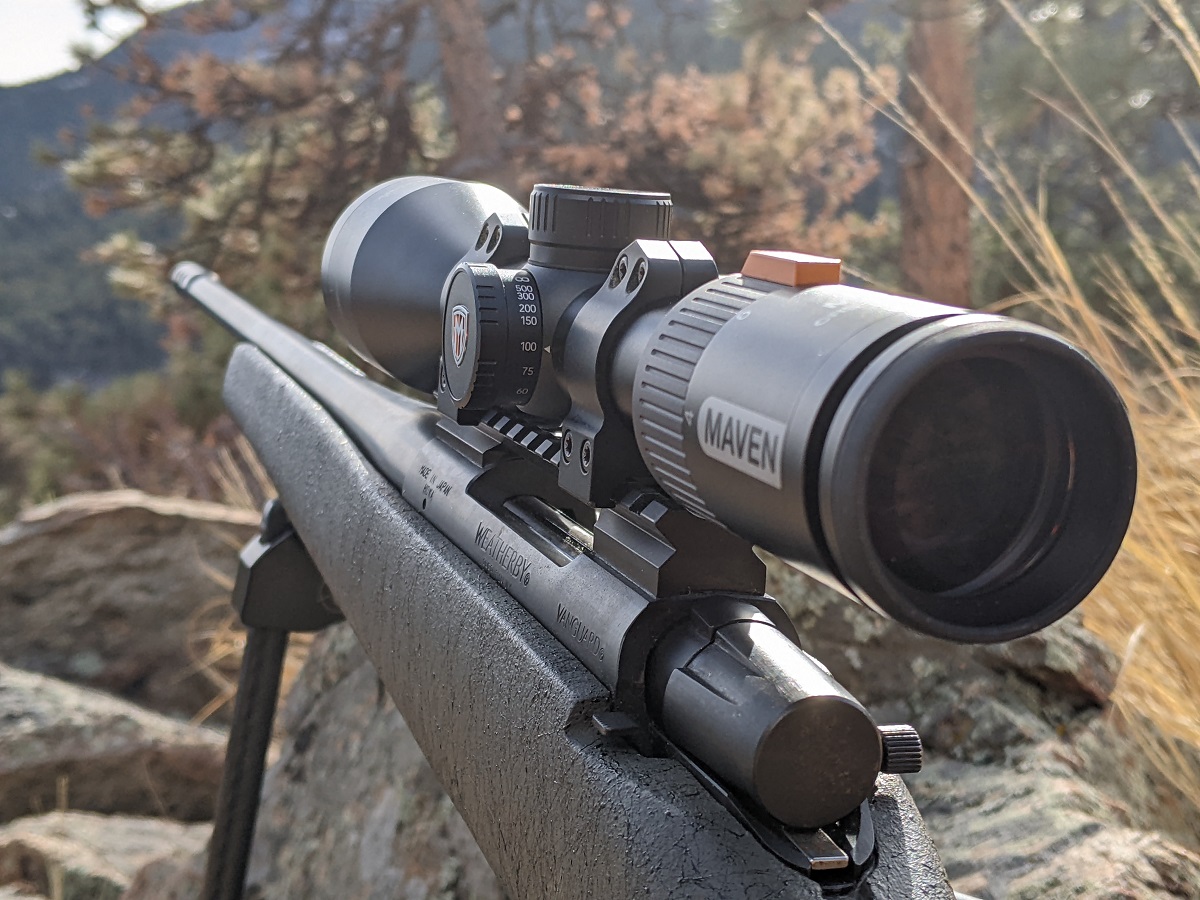 I think it is only fitting based on Maven’s design intent that I address reliability and durability first and cover the CRS line’s specifications last.  To get some seemingly obligatory riflescope testing boxes checked, I mounted the CRS.2 on a 22BR chambered Tikka T3 that had two dozen shots through it.

I made 24 shots at 100 yards beginning at the rifle’s zero with 1 shot, adjusting the dials 5MOA in both elevation and windage to a corner, and then returning to zero before setting out to a different corner. 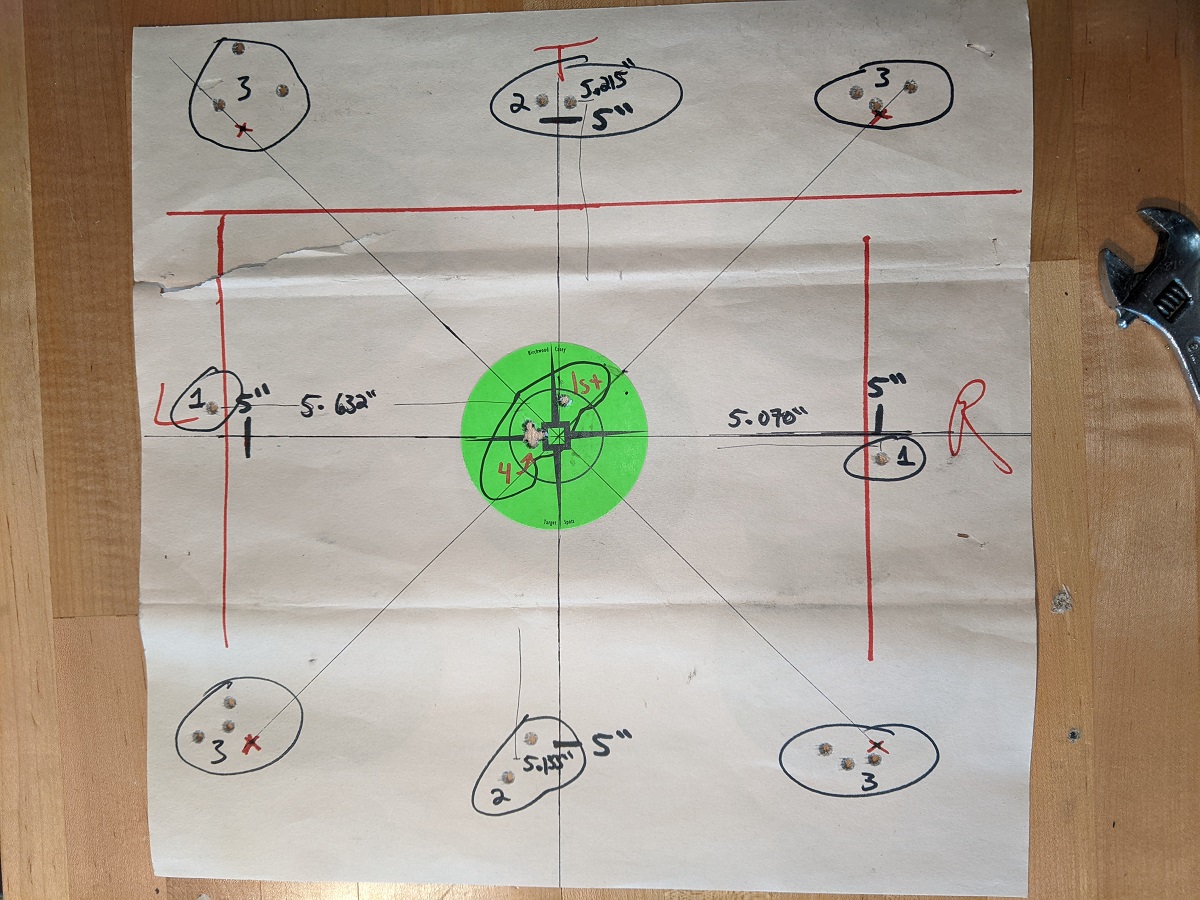 Thumps with a Dead Blow Hammer

To begin proofing Maven’s claim of the CSR line being durable and reliable, I dug out a 27oz dead blow hammer.  My shooting was done at an indoor commercial range, so some civility needed to be adhered to.

The testing process began with the zeroed 22BR Tikka and it was placed on a sandbag with one of the CSR.2’s three turrets facing up.  The end of the hammer’s handle was held level and stationary with the scope’s ocular, while the head was allowed to fall onto the upward-facing turret like a tree tipping over.

About half of the time the turrets were then randomly turned to their extremes up/down/left/right; sometimes they were not.  A total of 25 shots were taken at 100 yards, with a whack to either the parallax knob, capped elevation turret, or capped windage turret before every shot and most shots with some manner of turret turning and returning to zero.  There was no pausing to cool, and the process took about 30 minutes.  The results are shown in the top right of the  image below. 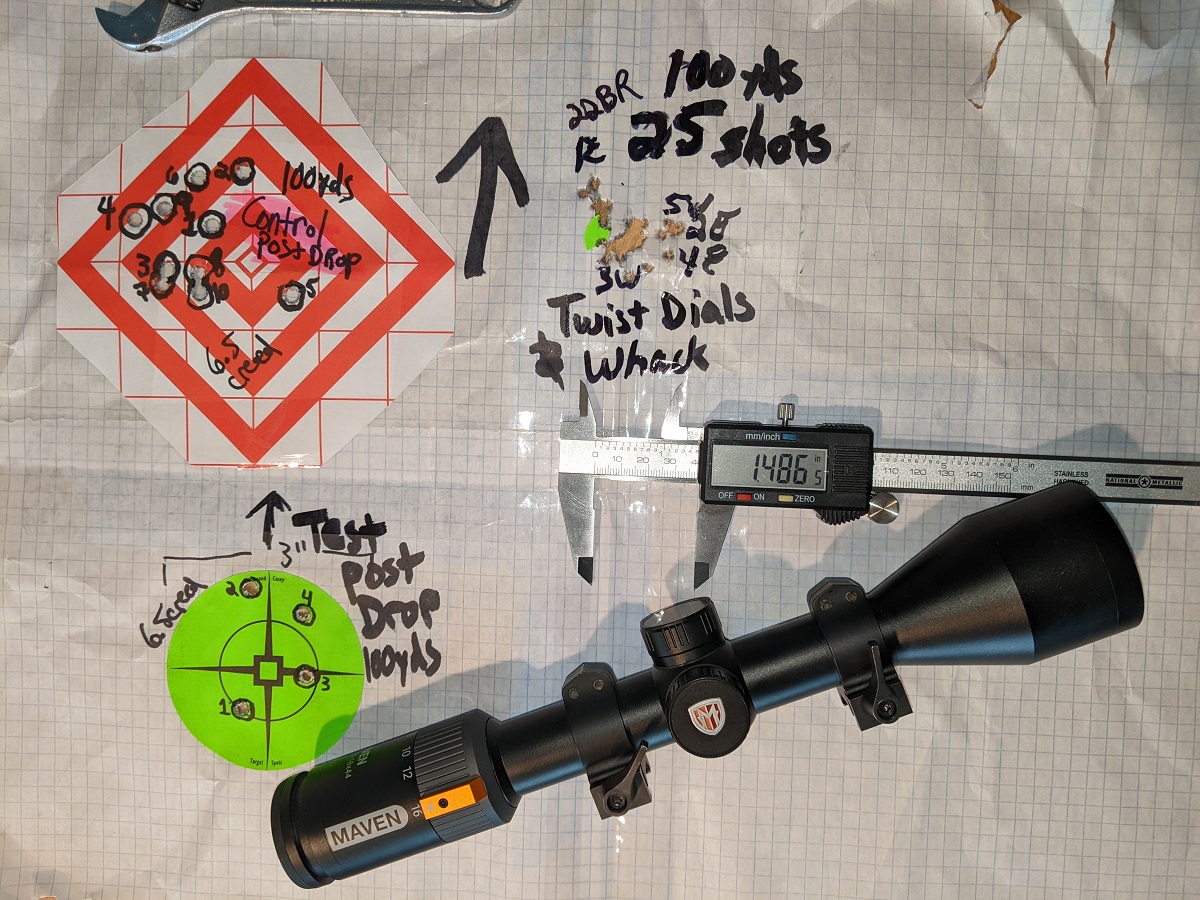 Since I had two doe tags open, I moved the CRS.2 over to a Weatherby Vanguard with a 20” barrel chambered in 6.5 Creedmoor.  This rifle is a rock-solid cold bore shooter, OK on the second shot, and from there on it will hold functional but unimpressive 100-yard groups.  I was able to get a comfortable 100-yard zero within a few practice shots using the CSR.2’s CSHR reticle (more on that later) and head off to hunt.

For the drive, I put the unloaded and uncased rifle with the CSR.2 mounted in the Cap-Pack drawer mounted under my topper.  Unfortunately, I found no does to hunt.  Fortunately for this review, I found enough rock-free ground to perform a drop test.

With my hand at about knee height, I dropped the CRS.2 mounted on the confirmed unloaded rifle so that it struck the ground once each on the parallax knob, capped elevation, and capped windage turrets.  I then fired the 4 cartridges in the Vanguard’s magazine at 100 yards. The results are shown in the bottom left green circle marked “test post drop” in the image above.  This group is on par for what this Vanguard typically will shoot.  To further illustrate the point, I put a known scope on the rifle and shot a 10-round group. That is shown in the same image above—the orange diamond marked “control post drop”. 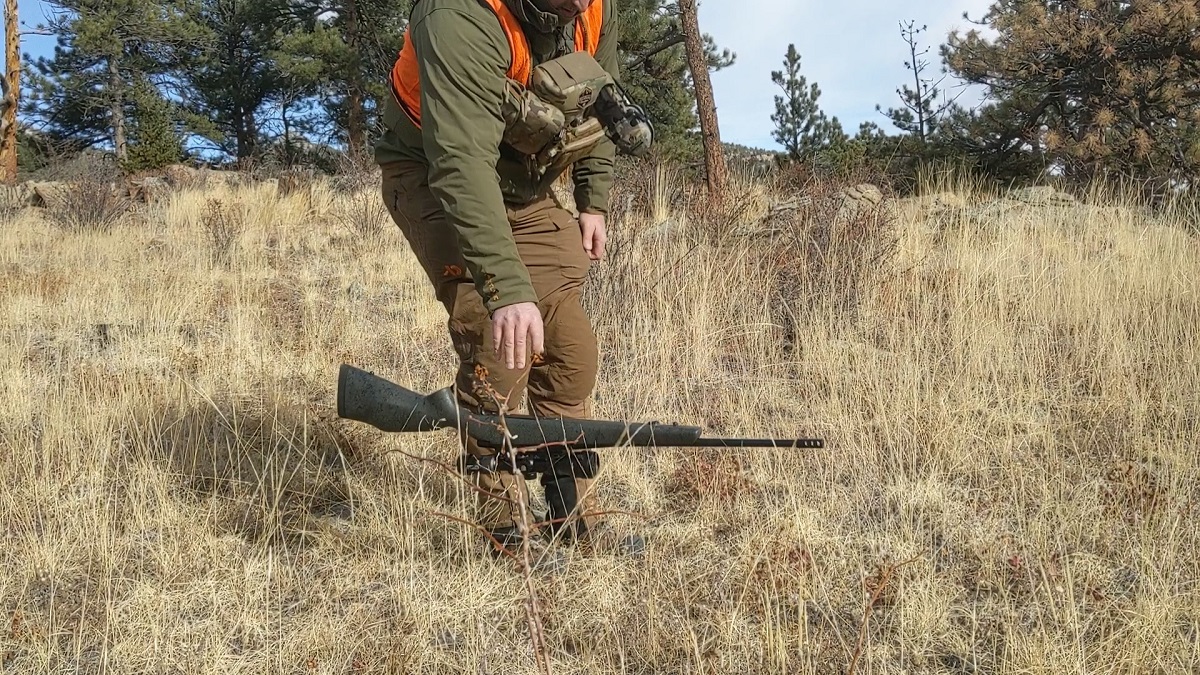 The CRS.2 is parallax adjustable from 25 yards to infinity.  I initially mounted it to a TCR22 (10/22 clone) and shot a few hundred rimfire rounds from 25 yards to 100 yards.  I found that the parallax knob was accurate as marked and easy to read while shouldered, and it was smooth.  The indoor range I used for testing allowed me to confirm to 100 yards, but I was able to obtain a steady enough rest while hunting to confirm it is accurately marked to 300 yards.

During my testing, I did a lot of turret adjusting and can confidently say that the 1/4MOA adjustments have a faint sound and feel.  With electronic ear protection on, I typically could hear the adjustments, and most of the time I could feel them at the range.  There is a silver needle tip-sized indexing mark on the body below both the windage and elevation turrets.  Each dial is marked from 0 to 17, with ¼ marks in between whole numbers. 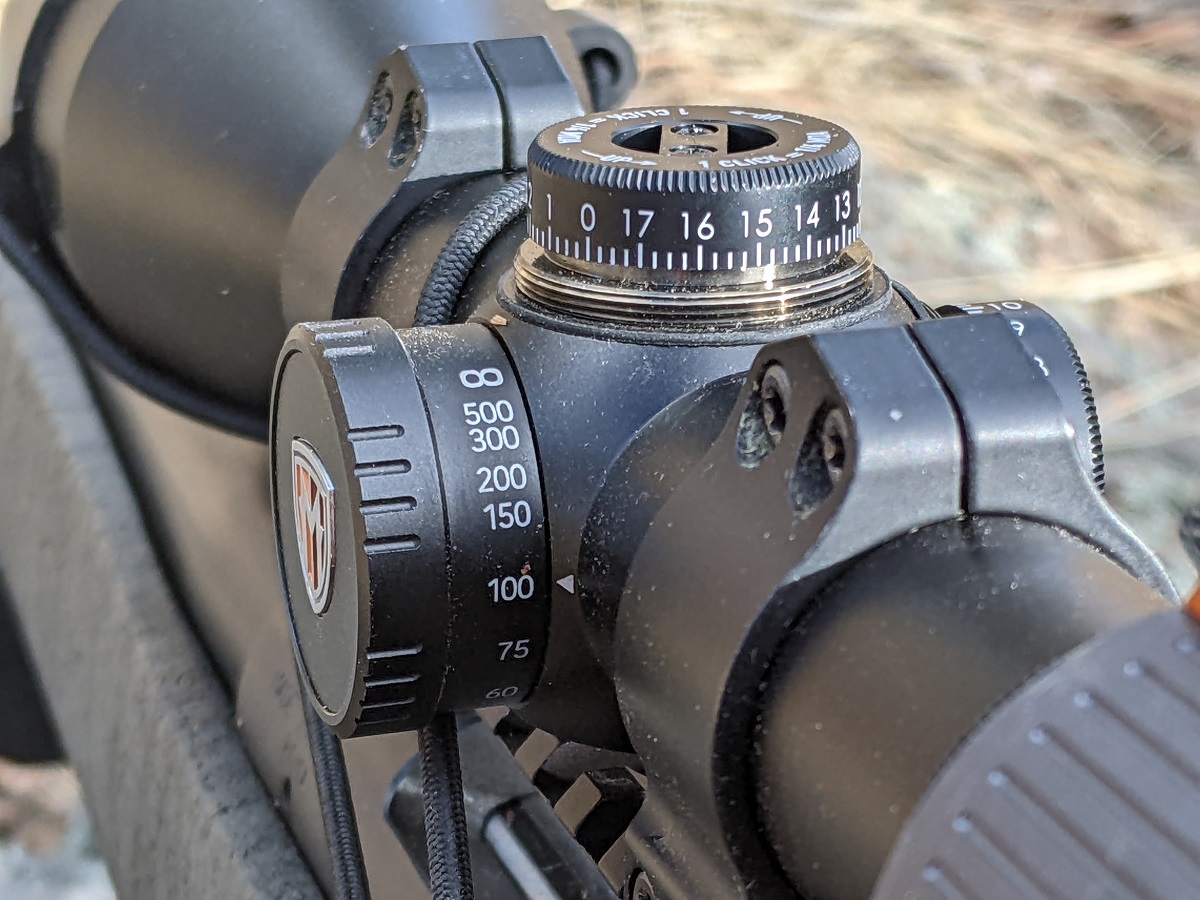 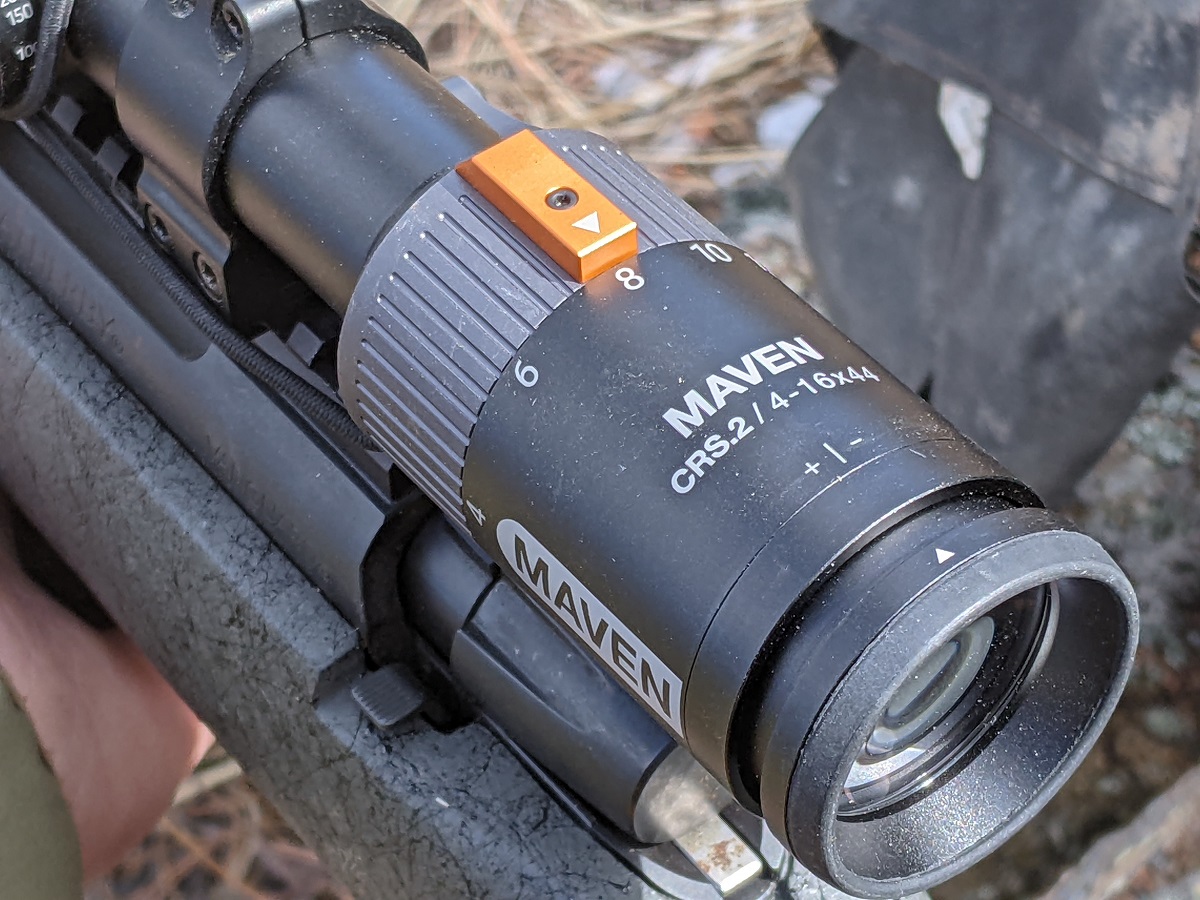 From my perspective, there are a few critical measurements that I would want to be aware of specific to the CRS.2.  If you are into flip-up scope caps like I am, I come up with an objective measurement of 51.95mm/2.045” and an ocular measurement of 39.37mm/1.550”.

I had one set of well-used 1” scope rings when the CRS.2 arrived: the vertical split Warne Maxima QD in a low height.  All my rifles have full-length Picatinny rails, and with the CRS.2’s maximum mounting length being 5.3”, I came within a few pieces of paper clearance at the ocular end on the Tikka rail.

Moving the scope back would have put the objective bell on the rail.  This could be rectified by taller rings, a short action, or a one-piece hybrid mount/ring.  The latter would be especially applicable on a magnum action.

Lastly, the reticle on both CRS models is Maven’s MOA based Classic Simple Hold Reticle (CSHR).  This is a wire reticle (non-etched). Starting at the center, it is at it’s finest thickness, then moving out to 5MOA, it steps up to a medium thickness.  Moving out further to 10MOA, it steps up to its greatest thickness, and maintains this to the edge.  I found that the stepped down nature of the reticle did a great job of centering my focus, and it is bold and dark.

There are 1MOA wide hash marks moving down the vertical at 5MOA and 10MOA; at 20MOA, the hash mark is 2MOA wide.  The CRS line is second focal plane, so these values only hold true at maximum magnification. 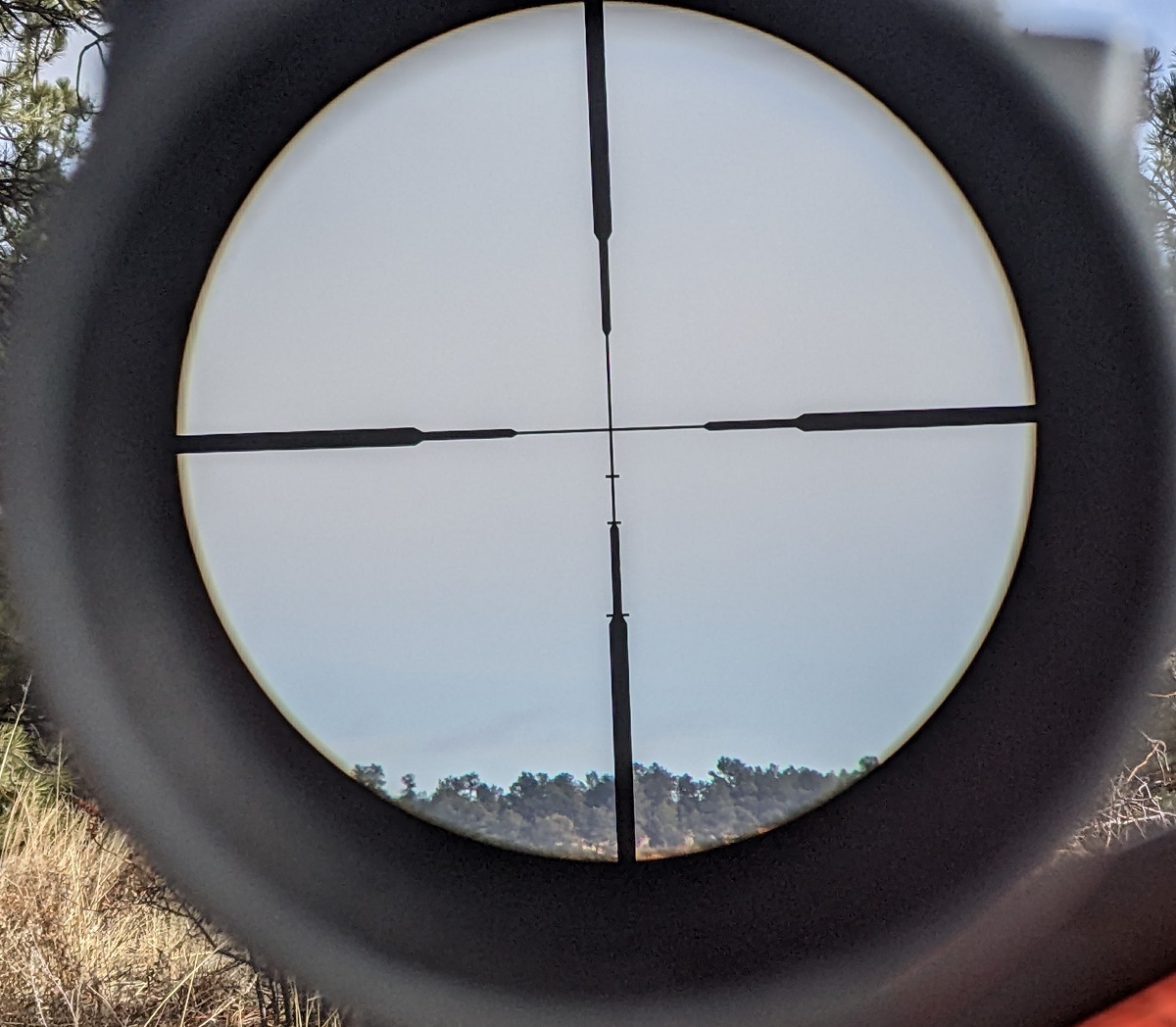 Something interesting happened on the day that I was to turn in this review.  My plan was to switch the CRS.2 over to an Xbolt 300WSM and remount the rings to the furthest width possible on that picatinny rail as that is where it would live for at least the next handful of months.  I discovered that one lower screw in each ring had sheared.  I do not know when during the testing of the CRS.2 this happened, but I do not think that it impacted the tests due to the similar size of the control group compared to the final test group.

Dusk and dawn viewing through the Maven CRS.2 were more than adequate to cover all legal shooting hours easily.  The thick and bold reticle was easy to pick out against dark backgrounds as well.  The view through the CRS.2 was relaxed and seemed to have a forgiving eye box and range of eye relief.  For those who wish to judge a riflescope by prioritizing the “glass”, I can’t think of any point of fault to nitpick with the CRS.2.  My only side-by-side comparison with other scopes, of which all were at least 60% more in cost, internal reflections from sun glare were not handled any better or worse by any riflescope and none offered a remarkably better view. 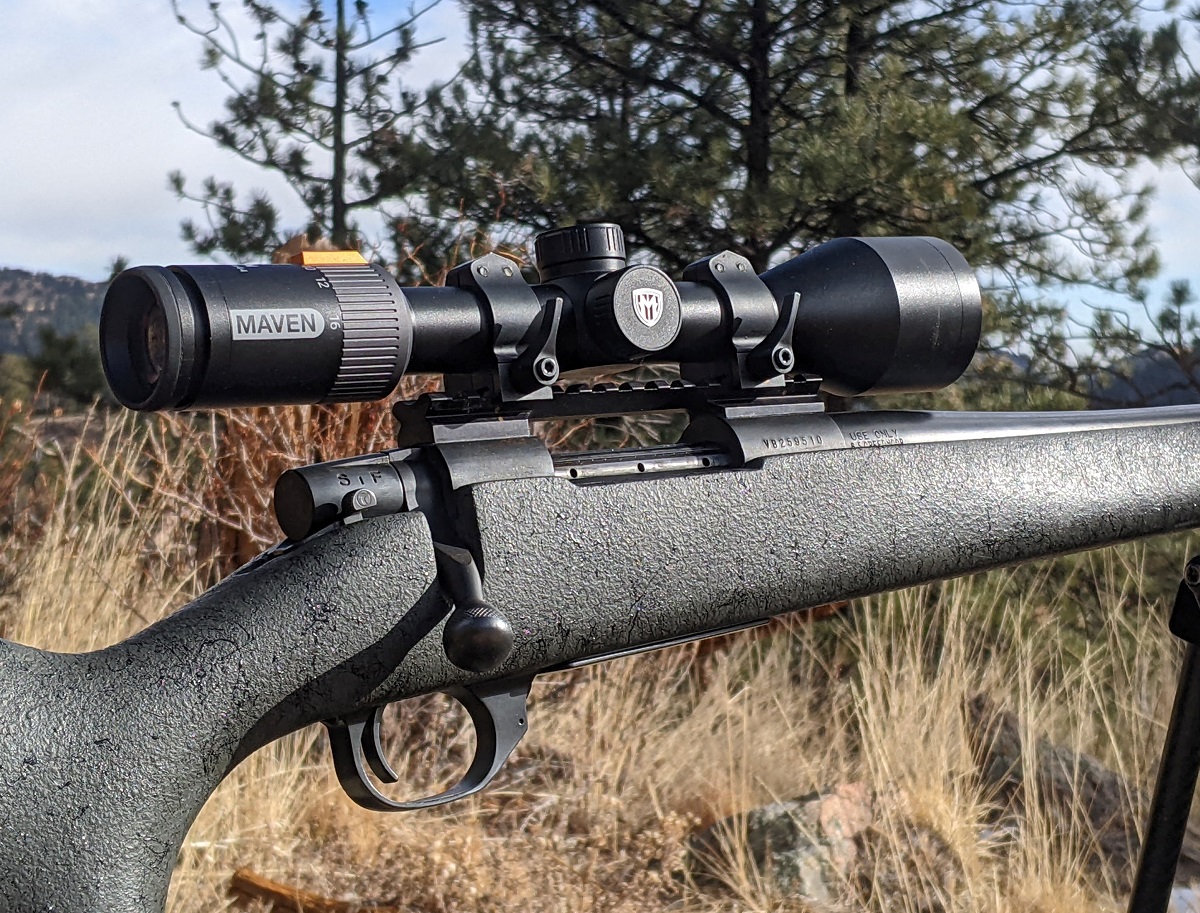 For those hunters who prefer second focal plane riflescopes and simple reticles, I think Maven’s CRS line should get their attention. Order your CRS.2 here or the CRS.1 here.

I will continue to test the CRS.2 to see what it can and cannot handle before there is an issue.  Subjectively, my only qualm with the CRS.2 is the hashmarks of the CSHR being at 5MOA, 10MOA, and 20MOA on the lower vertical.  In my opinion, intermediate hashes would increase the usefulness of the CSHR exponentially and I would happily give up the 20MOA and 10MOA hashes to gain whole number 1MOA through 5MOA hashes at full magnification.

Being that the CRS line is second focal plane, 1MOA through 5MOA hashes at full magnification would translate at half magnification to even number values 2MOA through 10MOA.  I think that a lot of hunters would feel most comfortable with that type of reticle in a set-it-and-forget-it scope out to 500 yards.  I sure would, but that is simply my own opinion.

Other than the one qualm with the reticle, I haven’t found any reason to not like Maven’s CRS line.  Some practice will be needed to gain familiarity and comfort. A big upside of this design was losing 10-15 ounces off the top of the rifle compared to the other riflescopes I own.  I was a bit surprised that the dead blow hammer and dropping didn’t break anything with the CRS.2. I think that speaks a lot to Maven’s commitment to delivering quality, while simultaneously finding ways to increase affordability.

The rest of our riflescope reviews are available here.